Not too long ago, my buddy Eric Lide  celebrated a birthday.  Our mutual friend Frankie Coleman arranged a little get-together on the Friday before SPX for us to celebrate.  Since this isn't really a personal blog, I won't post pictures, but I figured I'd share my gift to Eric here, since it is art. 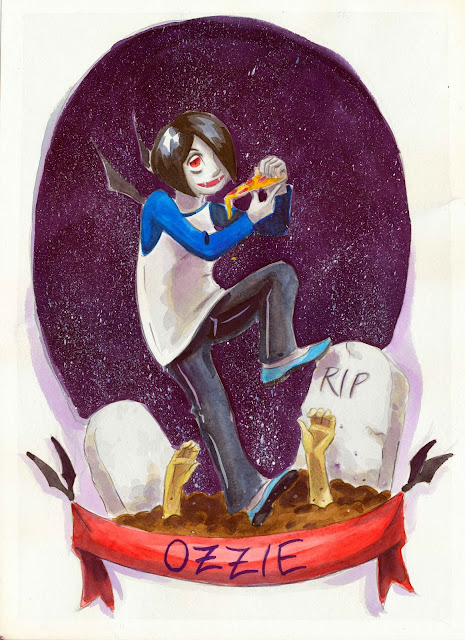 In the past, I've done guest comics digitally, but I wanted to do something watercolor for Eric.  I was working on Kara pages at the time, and there was a bit of a crunch, but I decided to push Kara back a bit to get this knocked out.  Usually I don't like starting new projects in the same medium I'm working in, since I have a tendency to get mixed up and use the wrong colors, but working with a separate palette helped me keep things straight.

This piece was painted on Blick's watercolor paper, which isn't my favorite to work on, but it has a nice heft and texture, making it perfect for gift giving.  The majority of this was painted with Winsor Newton half pan watercolors, but the sky was painted with a black mixed from several liquid watercolors.  This choice was inspired by a painting I did half a year ago, Kara standing in the snow at night, because I liked the tonal separation the mixed liquid watercolor gave me.  After everything dried, I masked off everything but the sky with tracing paper and flecked opaque white ink and iridescent medium to achieve the starry sky.

EDIT:  I just found some profess photos, so up they go!  I hope the photos help clarify my process. 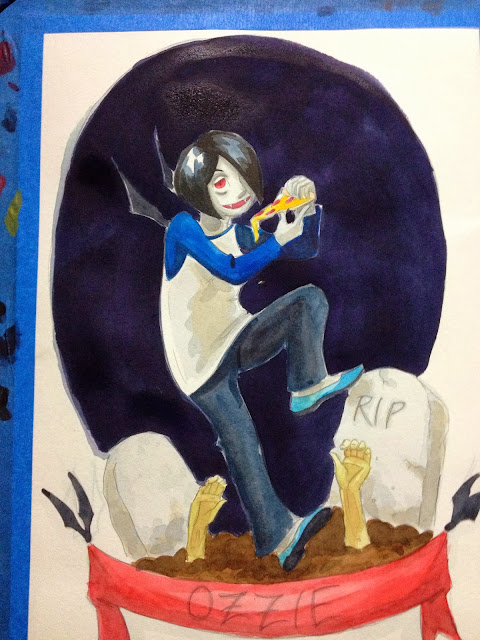 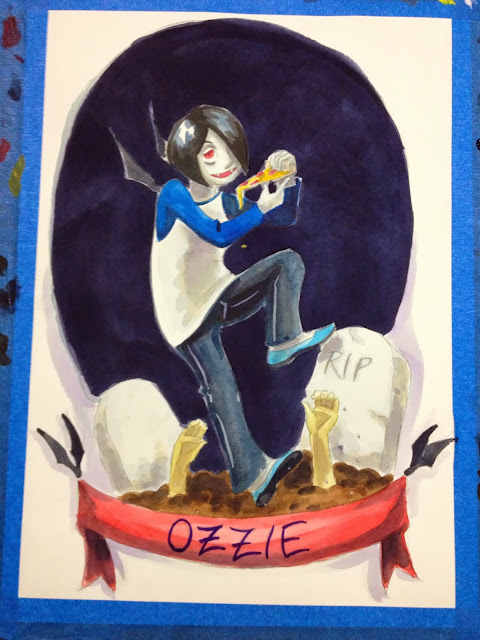 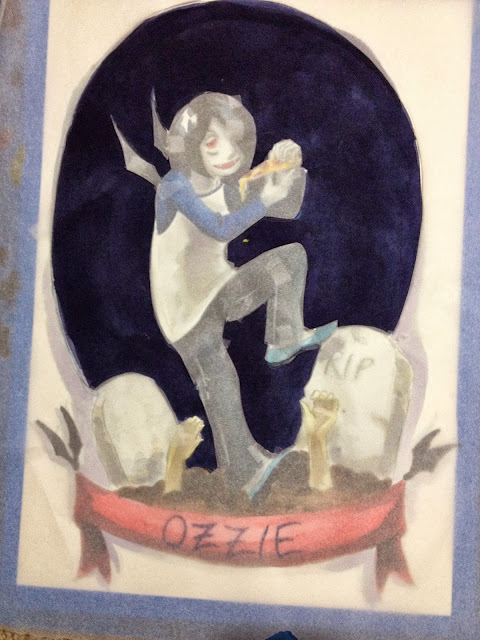 When creating a mask with tracing paper, I usually trace the outline in pencil, then remove the tracing paper to cut with an Xacto blade.  This might seem like common sense, but ahaha, I've messed up pieces in the past taking the lazy route.  I tape down my mask with a very low tack tape, in inconspicuous areas. 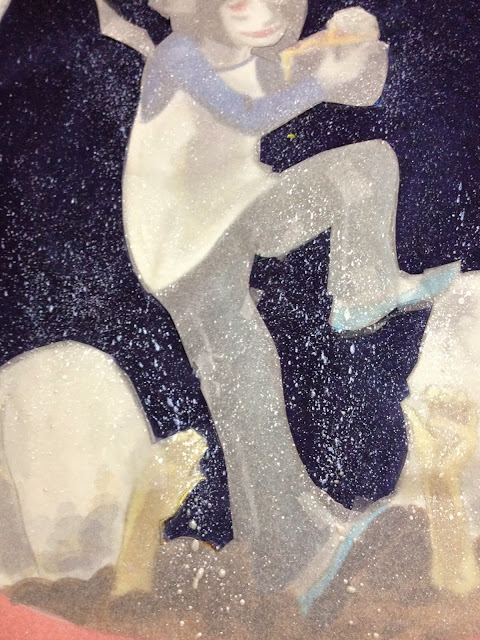 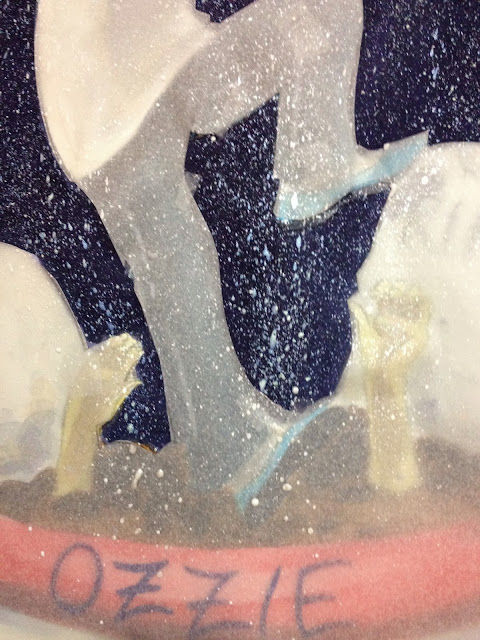 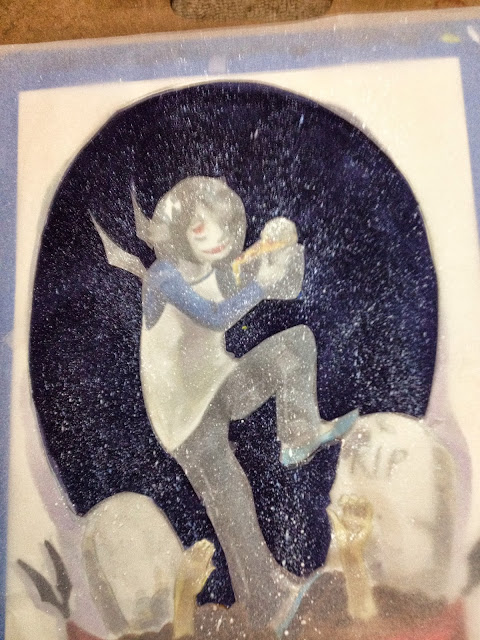 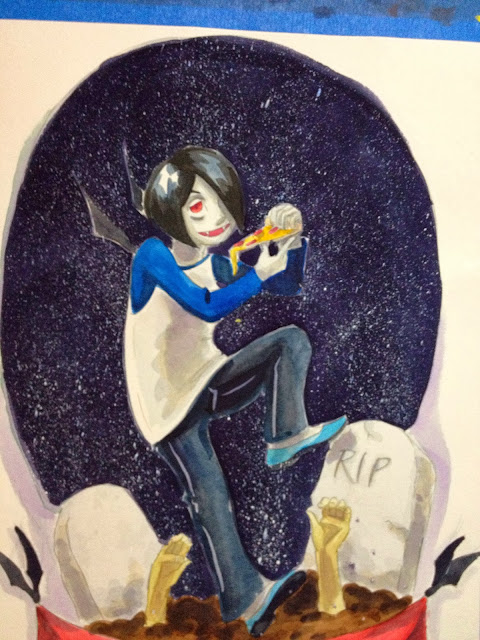 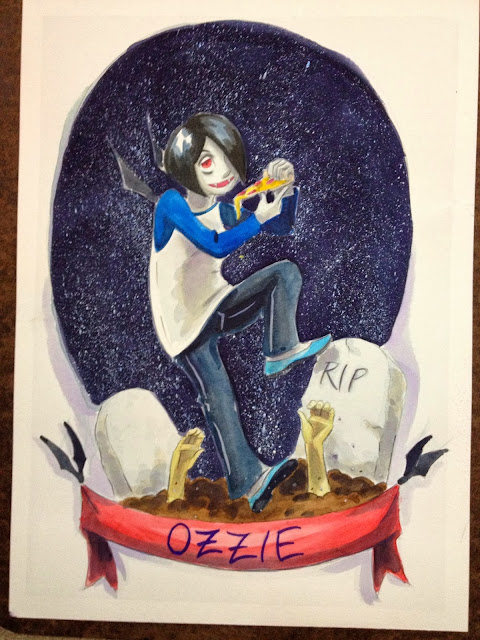 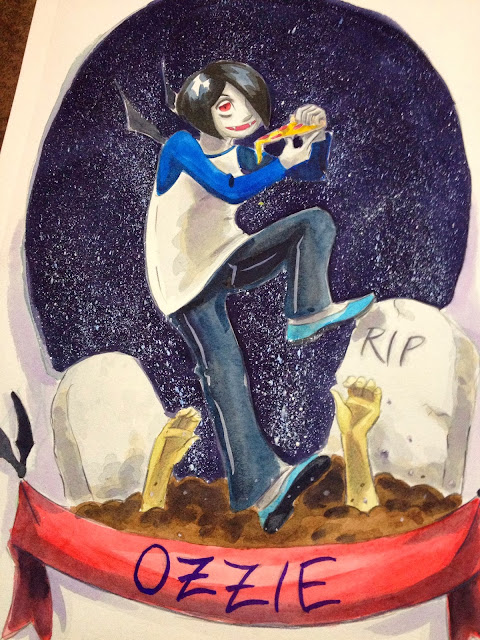 I'm always on the fence about giving original art as a gift, as some of my presents weren't as well received as I had originally hoped, but Eric seemed to really like it. Compared to the photos, the scan is kinda meh, but I think it looks really nice in real life.
Email Post
Labels: birthday commission Eric Lide Frankie Coleman Ozzie watercolor