In general, I don't really attend anime conventions anymore, if I'm not tabling or hosting a panel.  I stopped cosplaying a few years ago, and I've probably seen whatever anime is being screened.  Part of this stems from living in Savannah, GA for three years, as the nearest anime convention was a four hour drive away, and part of it is that at 27, I'm finding it harder and harder to connect with anime fans at conventions.  The demographic has stayed at 17 since I was 17, and only a select few conventions (such as Mechacon) draw an older fanbase.

Since moving to Nashville, TN, I've tried to get involved in a local comic community.  I've tried a variety of things:  asking at both art stores (Plaza and Jerry's Art-a-Rama), inquiring at local comic shops, nagging local hipster coffee joints if they know anything about indie comics in Nashville.  All signs pointed to a resounding 'nope', and I'd almost given up on a local comic scene within driving distance.  It seems that I have bad luck, as I happened to be out of town during this year's Handmade&Bound , which is all about the extremely small press. 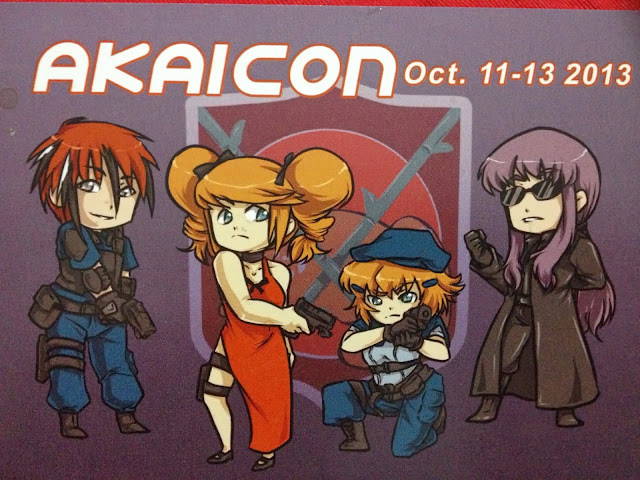 Long before I knew about Handmade& Bound, I had a list of local(ish) conventions generated by Joseph Coco.  On that list were KenTokyoCon and Akai-con. I decided to throw my lot into the local anime convention scene, and sent Akaicon an email inquiring about an artist alley table (their site said nothing at all about an artist alley) and offering to host some panels.  For weeks, I heard no reply, so I sent another email.  Nothing.  Then I started tweeting at them.  I was informed that they were sold out of tables, but if I sent them a list of proposed panels, they'd see what they could do.  So Heidi and I sent them the same list we submit to much larger conventions, chock full of comic-craft panels.  We heard nothing for weeks.  So I tweeted at them again, and was asked to list the panels submitted by actual name, not a general description.  Ok, sure.  Radio silence for awhile, and we were informed that we'd waited too long to submit panels, and they were booked.

When writing to conventions, I usually hear back within a week.  Dealing with Akai-con's social media was a unnecessarily protracted experience, particularly for an anime convention that was entering it's third year.  I understand that larger conventions often get swamped with applications, and I assumed that this might be the case.

As Akai-con approached, Joseph and I decided we wanted to buy one day passes for Saturday, to support the artist alley and support local artists.  I had hoped to possibly make some contacts in this area, as I knew no other Nashville comic artists.  We checked the site for information about one day passes- nothing.  Joseph checked their Facebook page, and found that other potential attendees had asked, and received no response.  I tweeted at them, and heard nothing.  We decided to chance it, since it should be only a ten minute drive from my apartment.

Traffic turned out to be somewhat crazy, since Akai-con is the same weekend as the Germantown Oktoberfest (on the same street, even, just a mile away) and the Southern Festival of Books, both events offering stiff competition in terms of attracting locals.  If I had planned on checking Akai-con out from pure curiosity, I wouldn't've made it,  since both of the other events sounded a lot more enticing.  However, I wanted to write a blog post about Akai-con, so we pressed on. 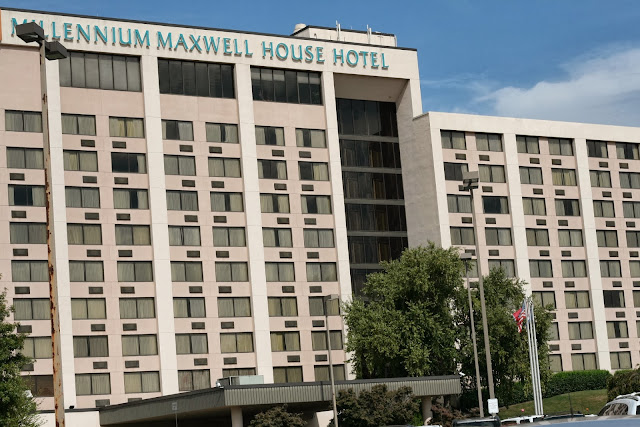 Akai-con was held in the Millennium Maxwell House Hotel, which is on Rosa L Parks Bld, somewhat outside the heart of Nashville.  There was plenty of free parking available, and from the size of the hotel, I hoped Akai-con would be a medium size convention.  I should have guessed from the number of empty parking spots and the general lack of people, that Akai-con would be lacking in a lot of ways. 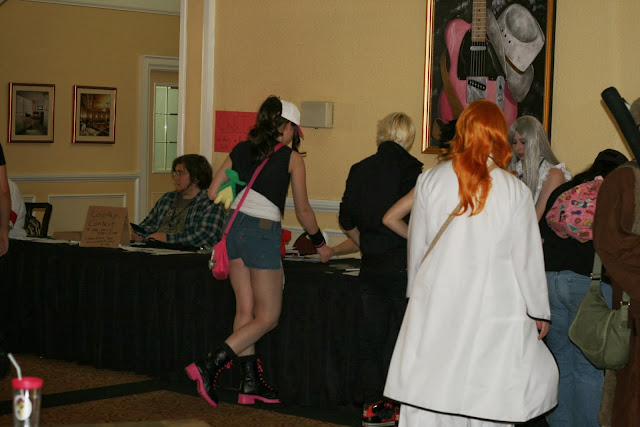 Registration was held in the lobby of the hotel, across from hotel registration.  There were no signs to direct us, and a lot of cosplayers milling about.  The line was fairly short, and registration relatively painless, with our 1 day passes costing $20.  The staff member we dealt with was fairly friendly, and we quickly filled out our registration forms.  We asked where the Artist Alley was, and were directed down a long hallway. 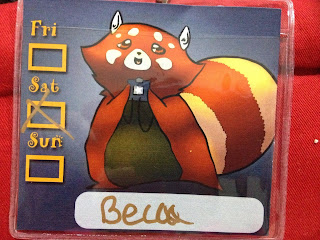 Akai-con seemed to take place entirely down this one hallway.  I peeked into panel rooms to see sparse attendance-- maybe three to five guests in each room.  Although the hall was pretty crowded, I couldn't really tell if the convention was well attended.  In a small ballroom was the 'exhibitor's hall', which looked to be the Dealer's Room.  At the end of the hall were a number of tables- I was afraid THIS was the artist alley, but they were simply club tables and tables purchased by other conventions for self promotion.  So where was the artist alley?

We double backed for a bit, reading the tags for the rooms.  Panel room, panel room, anime screening, exhibitor's hall...we peeked inside, and were overwhelmed by how crowded it was. 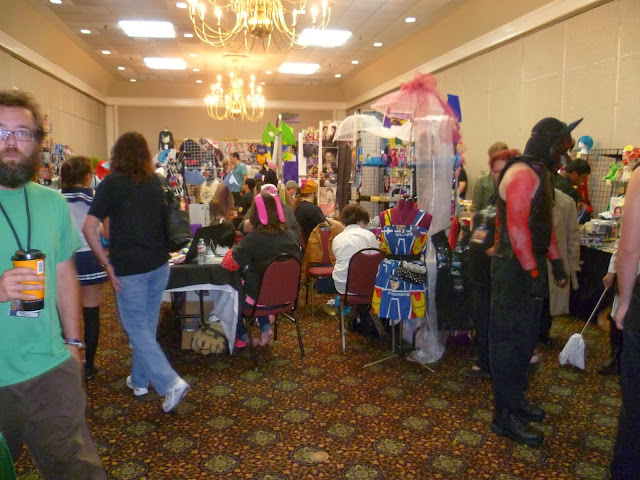 The Exhibitor's Room turned out to be both a Dealer's Room and an Artist Alley, all in a tiny tiny space.  The room itself was cramped, and the crowd wasn't moving, not because they were busy examining what was for sale, but because they were taking cosplay photos or chatting.  It was difficult to see what was actually for sale in the room, since things were so disorganized and cramped, and hard to tell artist alley tables from vendor tables. 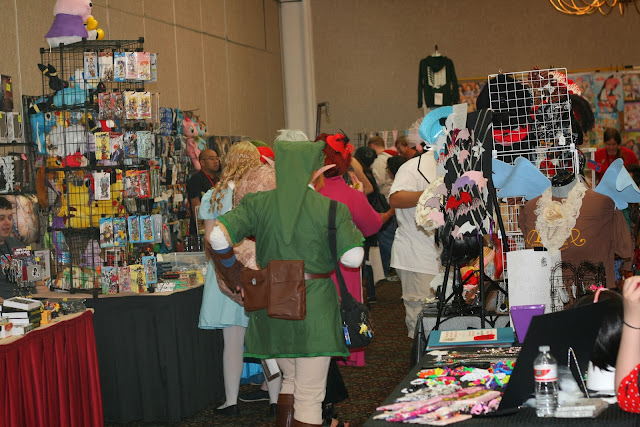 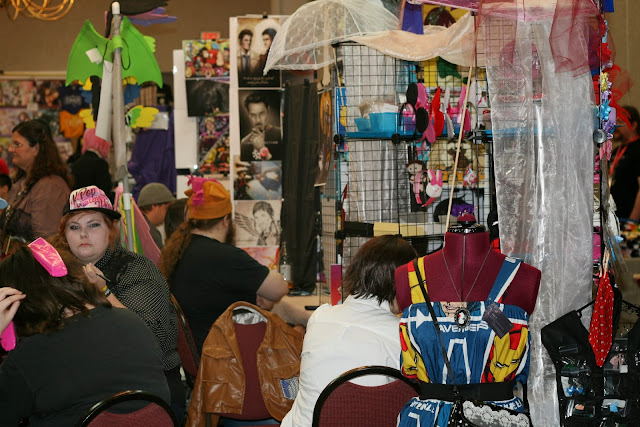 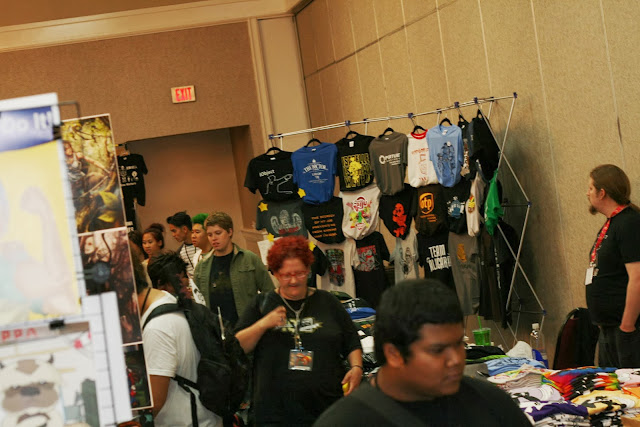 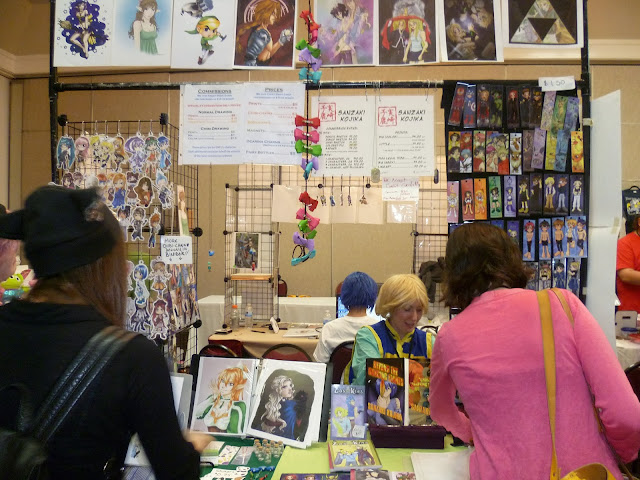 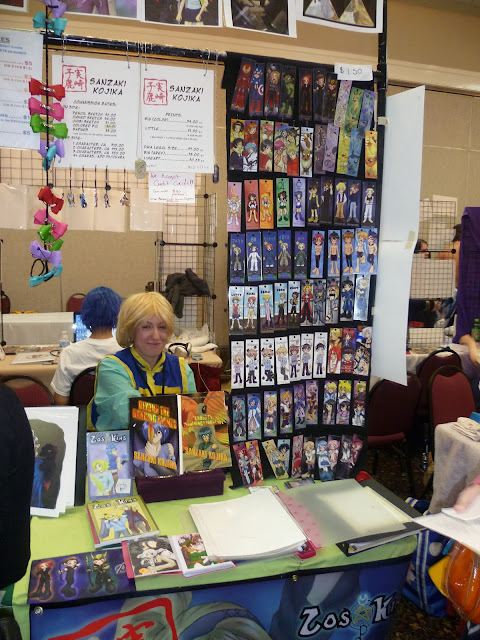 I was disappointed to see that the majority of what was being sold was fandom based.  Bookmarkers, perler bead pixel art (mainly based on pixellated designs commonly available on the internet), and prints dominated the small area designated for artists.  I had hoped that Akai-con would give me an opportunity to meet and network with local artists, and had packed comics and business cards with that in mind, but I only met one other artist with an original comic, which I purchased.  Sadly, it was my only purchase from the 'Exhibitor's Room', and the claustrophobic space made me want to leave as soon as possible.  In general, the artists and dealers weren't really interacting with potential customers, and while a couple artists offered commissions, I have no idea how successful they were at filling them in that tiny, noisy room. 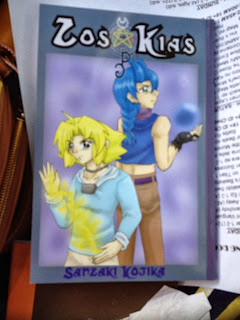 Akai-con reminded me a lot of my early days of attending conventions like Numa-Rei-No-Con in New Orleans.  Local conventions were a lot smaller then, often staffed by inexperienced 20-something year old anime fans who just wanted to foster a local community.  The major difference between conventions like Akai-con and Numa-Rei is that Numa-Rei was free to attend (in fact, it was the "Largest Free Con in the US" in 2004), funded by the very large dealer's room.  The Artist Alley at Numa-Rei was small, but inexpensive to table at, and setups and standards were a lot lower in 2003 than they are in 2013.  Numa-Rei was also a much younger convention than Akai-con, dissolving after it's 3rd birthday.

I'm glad I didn't manage to swing a table for Akai-con.  The shared Dealer's Room/Artist Alley is always bad for artists, and it didn't seem like the crowd was buying that Saturday afternoon, which is always bad news.  The room itself was claustrophobic, and the displays the artists had erected competed for space, making the room feel even smaller.  Even in a room that small, it was easy to get lost and easy to be missed.

I really don't like writing negative reviews about conventions, especially conventions as small as Akai-con.  Conversely, I also don't like it when artists get taken in by promises conventions just can't keep.  Akai-con failed in two major ways- a lack of communication with possible attendees and a lack of information available on the website made it difficult to tell if the convention was worth attending.  The space Akai-con offered artists and vendors was inadequate, and expecting artists to compete with vendors for customers is just cruel.  I feel like the Exhibitor's Room was organized by a staffer who is inexperienced with dealing with either vendors or artists, and had a lot of other concerns to deal with, leaving the Exhibitor's Room at the short end of the stick.


As an artist, I'd like to see a lot of changes made to Akai-con.  I personally feel like $20 for a day pass is a bit high, considering how small the convention itself is.  This, coupled with the fact that Akai-con was the same weekend as two other local events, may alienate locals from attending the convention.  I feel like anime conventions should consider offering a special rate to attendees who only plan on visiting the Artist Alley, as this would generate a lot more sales for artists.  I'd also like to see the Artist Alley and the Dealer's Room held in separate rooms, and I'd like to see Akai-con offer more tables for sale.  I'd like to see Akai-con step up their efforts to answer questions via email, Twitter, and Facebook, and perhaps staff an Artist Alley coordinator who understands the needs of an anime convention's Artist Alley.

Joseph and myself stayed less than an hour at Akai-con, and Joseph ended up gifting his badge to a kid walking in the door.  I opted to keep my badge so I could show it on the blog, but I definitely felt like $20 a person was a waste of my money for a convention that size.
Email Post
Labels: Akai-con anime convention convention Nashville