The Hana Doki Kira Shoujo anthology is now available in the Nattoshop!

Recently I did a mini Kara comic for an upcoming shoujo manga anthology, Hana Doki Kira.  While I'd prefer to save the entire story for those who contribute to the anthology's upcoming Kickstarter campaign, the contributing artists have been asked to share some of the art online, to help raise awareness about the project.  I am very much excited to comply. 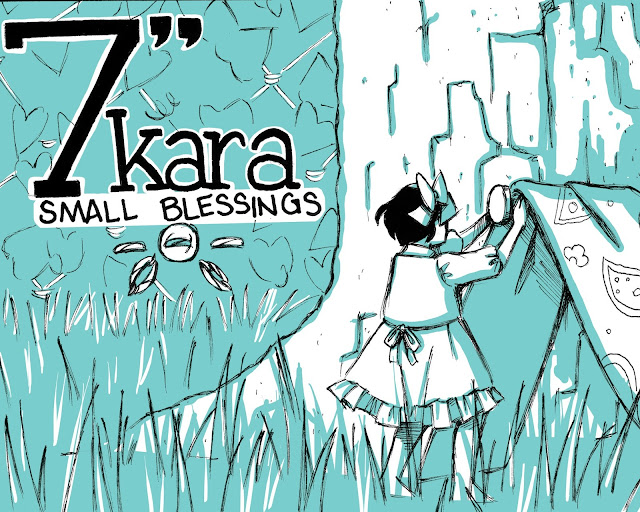 I wasn't specifically asked to contribute a story about Kara, but with six pages to work with, I didn't want to create a whole new 'world' or all new characters, and preferred to explore my own.  7" Kara in general is what I'd consider a shoujo story, but for my anthology submission, I wanted to explore a theme of love, and what it means to one particular little girl.  My mini comic is about a younger Kara (about six years old) finding a gecko egg and raising it. 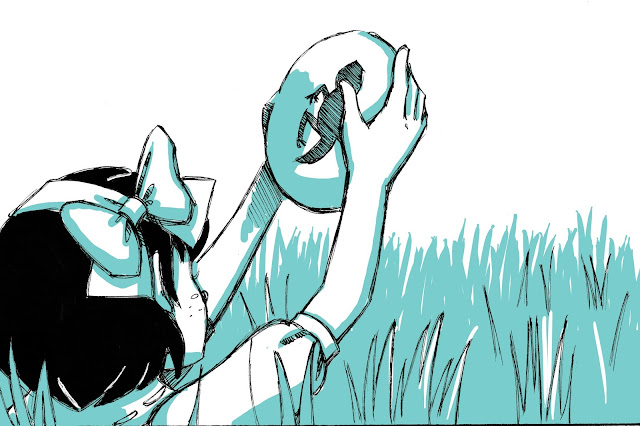 This story differs from my other Kara pages in many ways, and I consider it a Kara gaiden (a side story), that's part of the continuity, but isn't really important to the overall major story.  These pages required a lot of planning to get right.  I wanted a more shoujo aesthetic to my art, but lacked the ability to really rely on color to convey emotion.  I needed to soften my style, but I wanted it to be recognizable as my work.  I wanted it to fit into the shoujo genre, but I wanted to avoid anything heavy handed.

I needed to develop an entirely new approach to inking, but for this comic, I was forced to rely on tech pens as I was in the middle of moving from Savannah, GA to Nashville, TN, and needed to be able to work an uncomfortable working environment.  In the past, my inking with fude and technical pens has been criticized as heavy handed, but I didn't want to lose lineweight.  In the end, I decided to make strokes appear to be broader by applying many smaller strokes with a .1 tech pen, which was time consuming, but does indeed appear lighter. 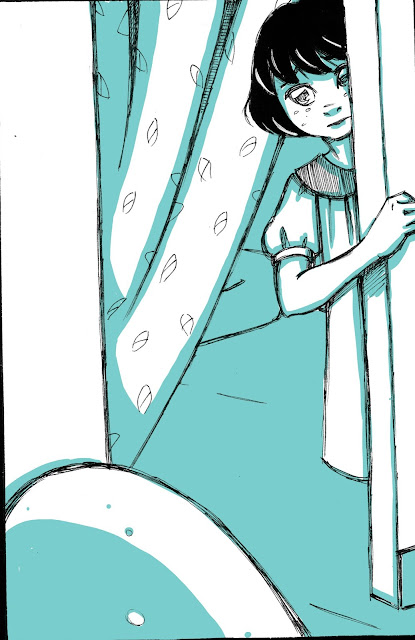 I'd also never used a color tone before, although I've wanted to for awhile.  Contributors to Hana Doki Kira were assigned Pantone's Seafoam green, a cool tone that is very cute, but if misused, can make the story read differently.  In order to prepare myself, I did several test sketches in my sketchbook, first to decide how to ink the comic, then to decide where to apply the spot blacks (which are pretty rare in real shoujo, they make the page appear heavy), and finally to get a rough approximation of where I would want to utilize tone. 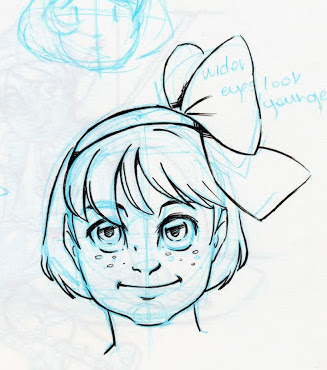 This was the first real sketch of Kara for this particular comic. 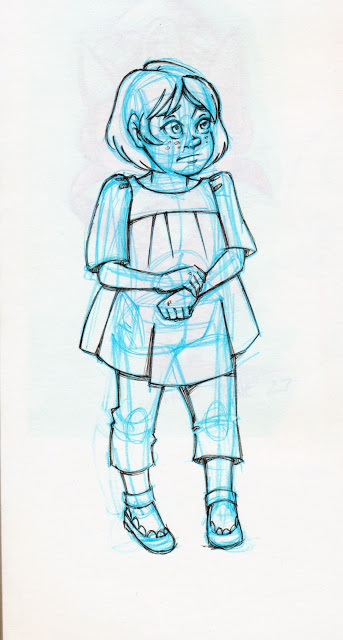 One of the first ink tests, done right in my sketchbook over my non-photo blue pencil. 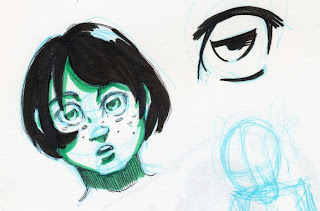 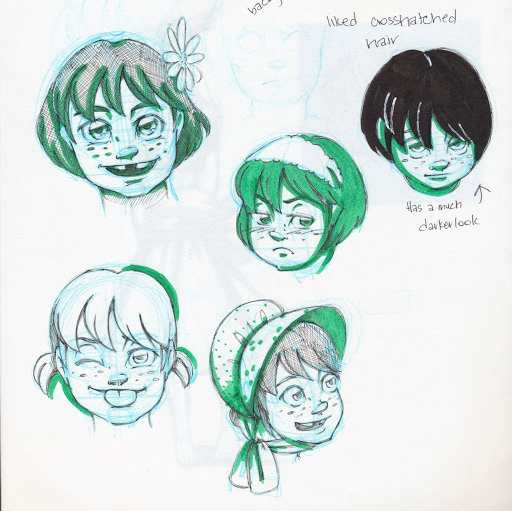 I really pushed myself to find way of juggling tone, spot blacks, and the inks in a way that didn't become too heavy.  To aid me in this search, I utilized a pthalo green Pitt Pen, since the Indian ink can go right over non-photo blue pencil. 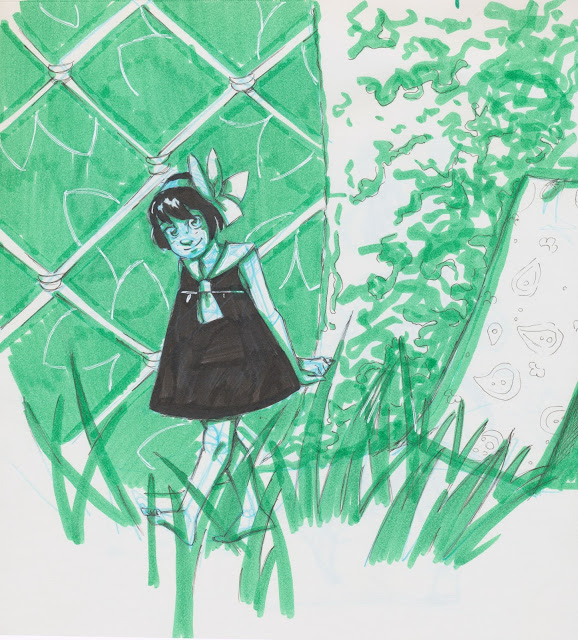 I bet you guys noticed how similar is to the one I posted all the way at the top.  I was so anxious about handling a large expanse of green (grass, leaves), that I did a sample doodle.  In the end, I decided to avoid having Kara wear black for this comic, leaving the spot blacks mainly for her hair and to help push areas of interest.  It's particularly noticeable on the original black and white pages.  I talk a little more about this process and my inspiration in some detail in this sketchdump. 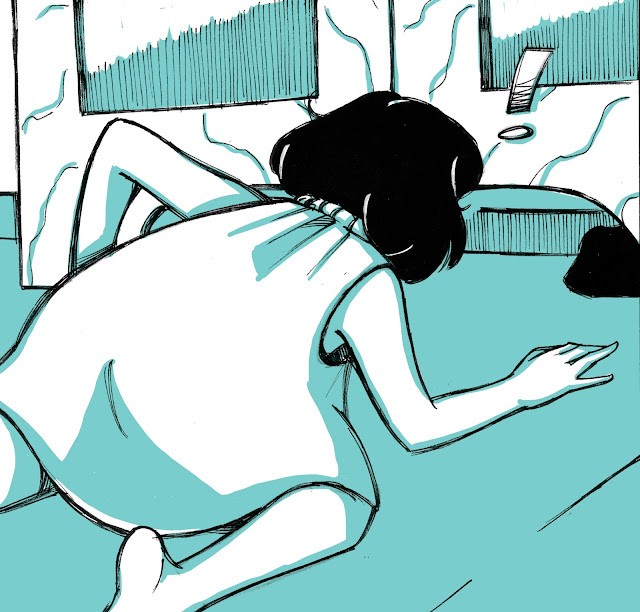 Overall, I'm very pleased with how this mini comic has turned out, and I'm excited to share it with an audience new to the world of 7" Kara.  I've been a fan of shoujo manga since I first got into comics (at 14), and am happy to have the opportunity to work with other artists interested in telling the same sort of stories I'm interested in telling.   Hopefully a heartfelt story about a little girl raising an unusual pet will be understood for what it is- a different sort of love story. 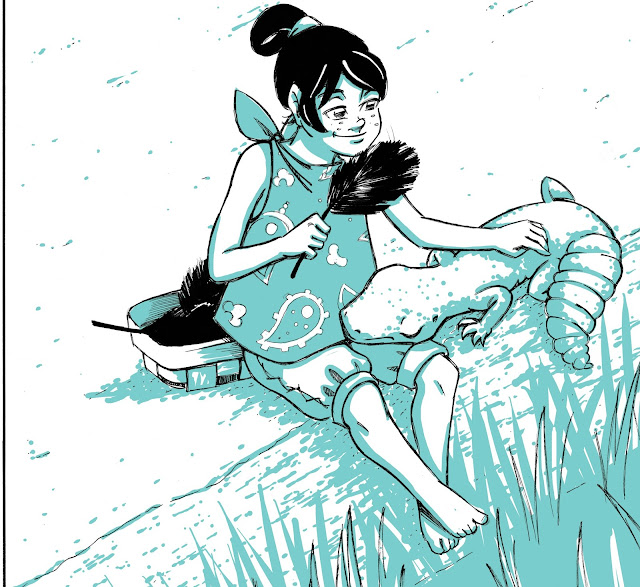 For those of you who saw the original 7" Kara at it's MoCCA-Fest debut, the above image might look a little familiar.  It's pretty similar to the cover for Chapter 2! 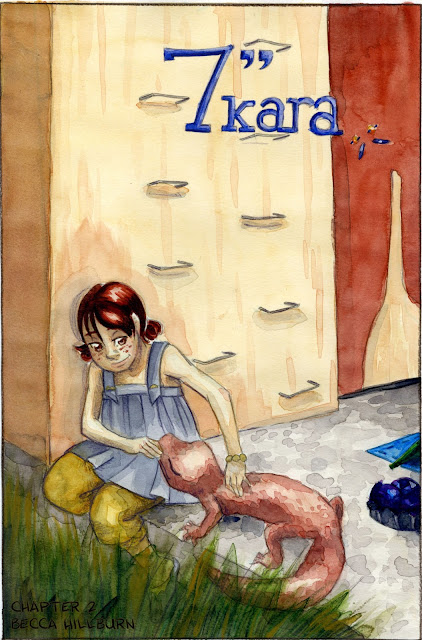 This is no coincidence, I wanted to neatly tie this side story into the main story.