The Weeks Leading Up To The Con

Mechacon is a pretty important con to me.  Because it's in New Orleans, it's a lot like coming home.  And it's important that I do well, as it's a bit like vindication.  While I may joke that I'm trying to prove to the people in my past that I'm making of myself, I'm really trying to prove to myself that I have what it takes to succeed as a comic artist.  To be honest, using Mechacon as an indicator of ability is a bit of a stretch, but I still can't get over it.  If I fail at Mechacon, then I really feel like I've failed.


It's a small convention with a lot of personal history.  Last year was my first year attending as an artist participating in the Artist Alley, and I had some fears that my past as a cosplayer would bite me.  Fortunately for me, all of those people have moved on with their lives, and I was able to participate with a clean slate.  Heidi and I were so impressed by Mechacon last year that we decided to try and make it a yearly thing.  I had a lot of reservations about this year's Mecha- we had an extremely tight schedule, I was using an assistant I hadn't really used before, I didn't have any charms and was intended to really push my watercolors and commissions.  To be honest, I had trouble sleeping the two weeks before the con, as I let my anxiety get the best of me.  Some of that nervous energy was harnessed into producing the ridiculous number of mini watercolors I painted, but a lot of it was also spent watching Master Chef until the sun rose, nervously nibbling my nails.

In the weeks leading up to the convention, I spent late nights juggling freelance work with rebuilding my mini watercolor selection.  I generally focus on painting fanart from series I actually enjoy, or series that espouse qualities I want to encourage.  Because Sailor Moon was a huge part of so many fans anime history (my own included), made sure I had plenty of nice watercolors for it.  If you're interested in seeing what I painted, you can check out  this post, which doesn't even contain all of it.

The Week of the Con 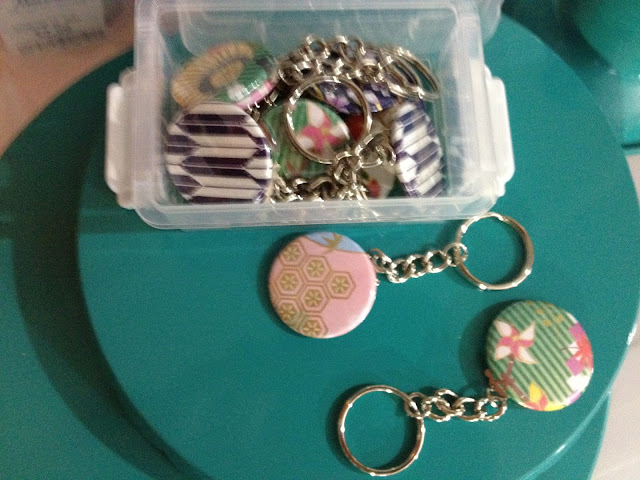 The Monday before the con, Heidi came down to hang out and help with con prep.  It was really nice having another comic artist around, and I managed to step up my game and get a bit more done than I'd thought I would.  It just goes to show that having another pair of crafty hands around the apartment can really go a long way. We drove down to Tuscaloosa, Alabama on Thursday, to spend the night at Alex's house so she wouldn't have to miss her Friday class.  After her class ended at 10, we made the drive down to New Orleans, hoping to still catch the Friday crowds.

We arrived a couple hours after the Artist Alley had officially opened, and hustled to get checked in.  I thought I'd purchased an assistant's badge when I bought my table, but the staff couldn't find the additional badge, so I purchased another.   After talking with my mother on Saturday, I found out the staff had actually misplaced her and my brother's badges, but she had her confirmation email, so they were forced to replace them.  Had I been thinking clearly (instead of with an insomniac's brain) I too would've brought my confirmation email with me on Friday.  Next year!

When I'd arrived at my table, I was informed by the girl next to me that the hatters down the way wanted to switch spots.  While I was amenable to the switch, I was fairly annoyed that they didn't ask me themselves, since it forced me to hunt them down to make the switch.  I also lost time waiting for them to actually move their considerable collection of wares so I could put my things behind the table and out of the very busy aisles. At one point, one of the girls removed my comics and money box from one of the chairs, placing it back on the con floor, which I found pretty nervy considering they were now occupying both their old and new space, leaving me with none.  Next year I may not be so easy going about making switches.  Lesson learned:  If you want to switch spots, you should have your things ready to go beforehand, since they're the ones doing you a favor.  I lost even more time struggling to get set up alone, as Alex had long since wandered off to help Heidi instead. 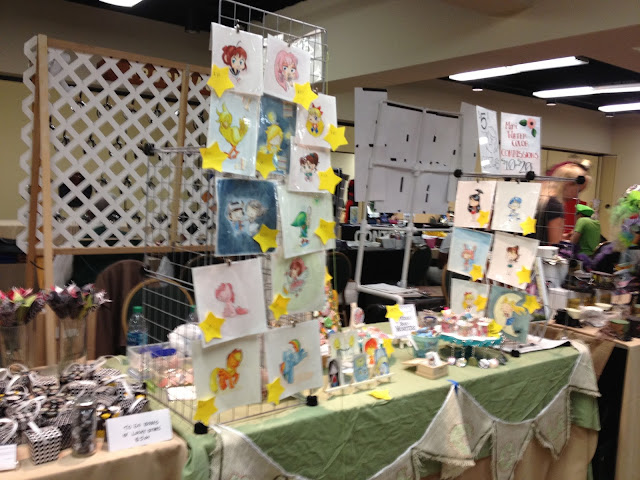 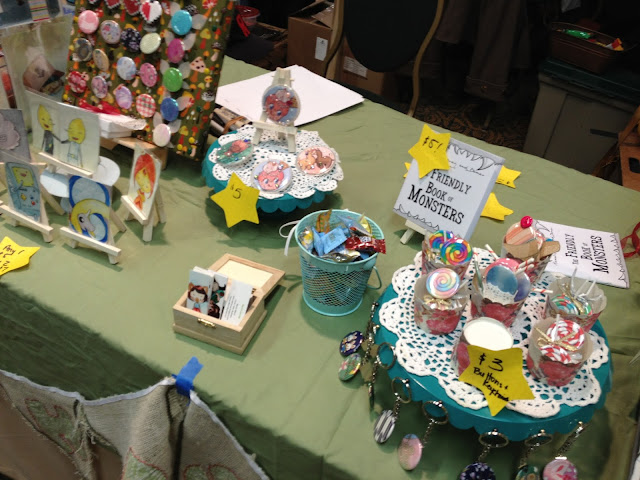 This year, I decided to finally break out my metal cages and utilize a hybrid of the McDonald's Drive-Thru setup.  Because I'd painted so many mini watercolors, and wanted to focus on moving them, this setup became instrumental to my sales.  Unfortunately, a set up like this does take more time, and often requires a couple sets of hands to get it going.  In years past, I'd avoided these cubes as they are very heavy and tend to take up a lot of table space, but I knew I'd need a vertical display to really sell my watercolors.  Since we were driving, the weight wasn't really an issue, and with a setup like this, once those wire cubes are up, they can remain up all weekend.

Besides a million watercolors, I'd also pressed another set of heart and half heart buttons, finally utilized my button maker to make some chiyogami key chains, and pressed some brand new dinosaur buttons.  Together Heidi and I made some Legend of Zelda fairy buttons, and repressed more lollipops.  Since my newest batch of acrylic charms hadn't yet arrived, I picked what I figured would be the three most popular designs and made 2.5" buttons, complete with rhinestones, pearls, and glitter.

On Saturday, my mother and brother came to Mechacon, and Alex abandoned me to help Heidi.  Unfortunately for me, my mother is an awful assistant (compared to Alex), and I really struggled to keep up with commissions, make sales, and record my sales figures.  A word to the wise- a good convention assistant isn't there to make conversation and distract you, a good assistant's there to actually assist, allowing the artist to do what they do best- make art.   Not only did Mom chat up any and everyone (which isn't necessarily bad, but it doesn't keep the flow of customers moving), but she shared personal stories about me (and what an awful nerd I was) with anyone who needed a kind ear.  My booth soon became a confessional, and I felt a bit like a therapist who just so happens to doodle while she counsels.  In general, I really really do love talking to people, especially people who like my art, but rush hour Saturday isn't a good time to chat me up.  Perhaps I'd gotten spoiled by Alex's fantastic job being a table assistant while she was at my table- I literally never had to tell her what to do.  She assisted customers while I dealt with booth barnacles and drew commissions, got coffee and snacks when Heidi and I were fading, kept track of my sales and my running tally, and manned my booth alone on Sunday when I was too sick with a migraine to take sales.  Seriously, Alex should do a mini-class on being a table assistant, she was that fantastic.


Well, the nice thing about Mechacon is there are a lot of older fans.  Not only are there a lot of older fans, but they generally attend the convention determined to spend money.  In general, New Orleanians like to support local businesses, and that sentiment extends to the Artist Alley.  Thirdly, the Dealer's Room was supposedly awful this year, so the Artist Alley didn't have to compete with manufactured, licensed, mass produced goods.  All of this bodes well for artists.

I made a little over $500.  For me, this is fantastic, my prior best has been $250.  A lot of my sales were commissions, both graphite sketch and watercolor, but on Sunday, I was away from the table nearly the entire day with a sick headache, and Alex managed to move over $100 in prepainted watercolors and buttons.


I was often too busy to get a photo of finished commissions before I packaged them and sent them to their new homes, but here are a few I did manage to photograph. 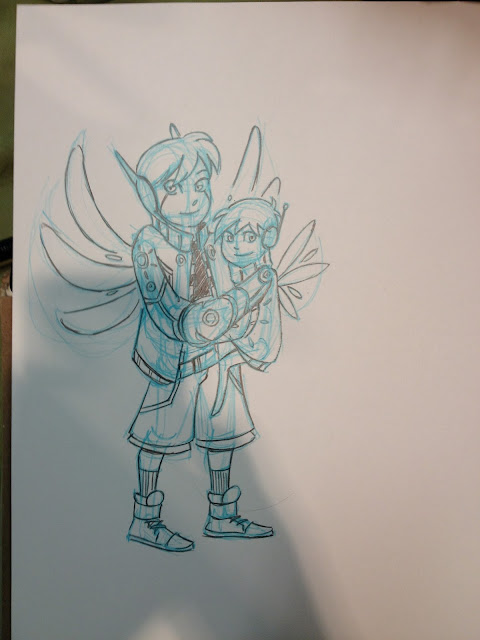 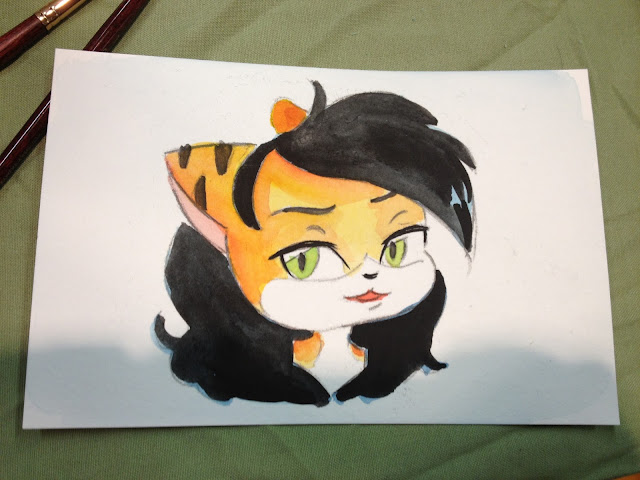 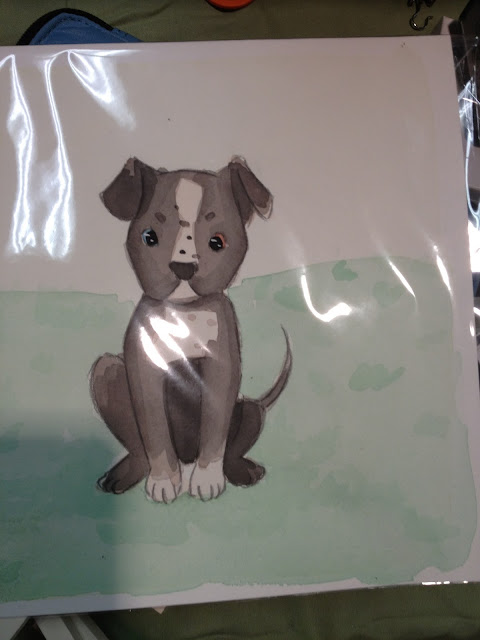 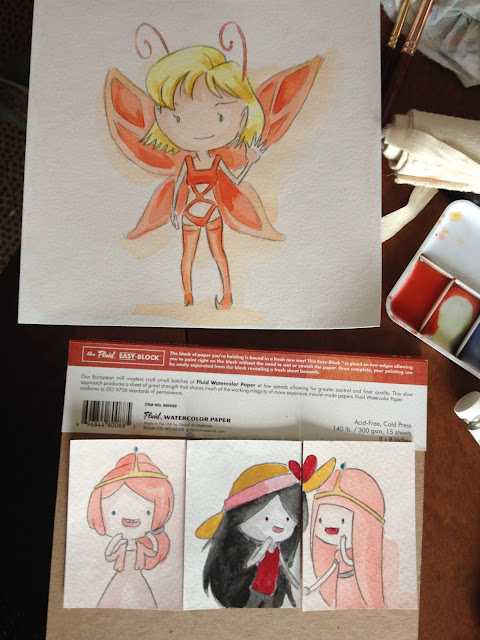 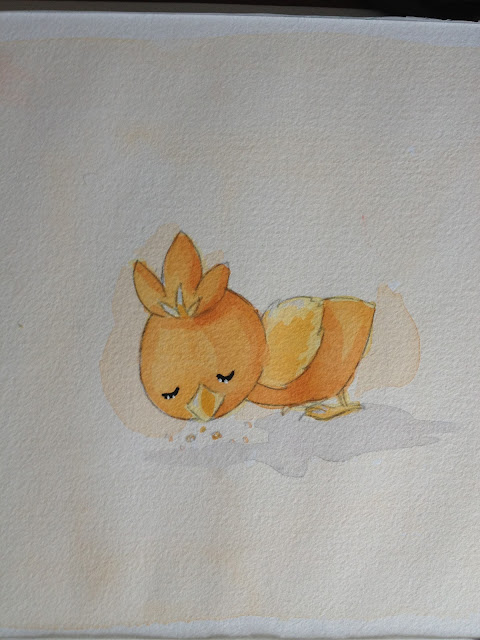 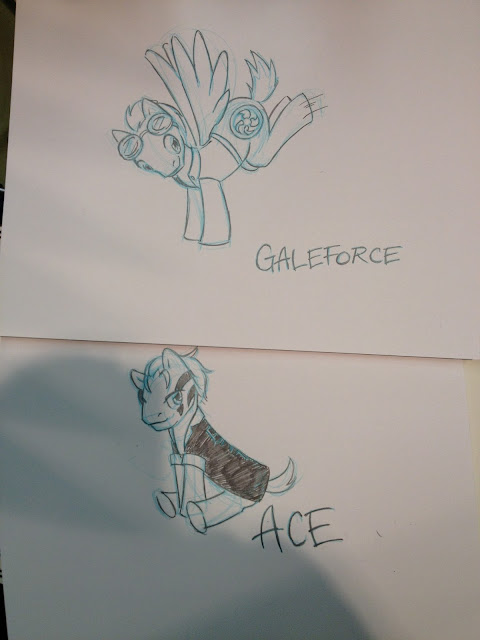 My watercolor commissions were fairly in demand (there was a fantastic crowd this year, a lot of customers were purchasing commissions from a variety of artists, and CAME WITH REFERENCE READY /me swoons with appreciation), but it was a really damp weekend and I couldn't take as many as I would have liked, as my dry times were too slow.  I was able to knock out simple commissions in about 5 hours while sitting at the table (most of that being dry time), and many of my customers were fantastic enough to allow me to bring it back to the hotel room and pick it up the next morning.  This meant late nights for me, but as an artist, I understand that conventions are a time of pushing personal limits and satisfying the customer.  I am happy to say that I think I did a good job of that, and was touched to see how many customers were genuinely appreciative of the work that went into their commissions.

Recently there was some discussion on Twitter about OEL manga and sales at anime conventions.  The participating artists (myself included) came to the general conclusion that original content comics don't really sell at anime cons unless you have an established webcomic audience.  Mechacon was no exception, I sold zero copies of 7" Kara, but I didn't really focus on moving them either.

On Sunday, since I was mostly out of commission (do do tish) when it came to commissions, Alex really pushed the existing merchandise- buttons, keychains, and watercolors.  As I was horribly sick the whole day (vomiting, migraine), she also had the pleasure of assuring people that no, I wasn't hungover.  When it was time to pack up, she and my mother cleared my table for me, which was a huge lifesaver as I couldn't even move without getting sick.


Something unusual and annoying that I've noticed is that when I share a table with someone, even if it's an assistant, potential customers will address anyone BUT me.  They'll also assume that the other person is the artist, and not me.  When they do figure out that I am indeed the artist, they assume that half the work belongs to the other person.  This happened even with Alex's insistence that everything on the table was my handiwork.  This happens pretty regularly, and I'm pretty curious as to why, and figuring out what I can do to improve the situation.

Because I was so sick, I sadly don't have any photos of the convention floor, nor did I really get to go around and network with other artists as I had planned.  I did meet Alexis, a talented and hardworking young artist who I think is really going to go places.  Hopefully next year, I can finally get out from behind my table and meet other Louisiana artists.

And just so you aren't left with ONLY my booth, here's a shot of Heidi's on Friday. 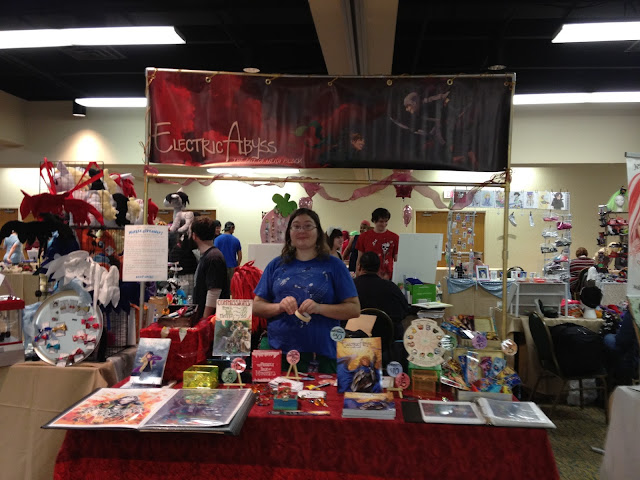 ,As always, the people of Mechacon were a pleasure, although my experiences with the staff were slightly less than picture perfect.  If possible, I'll continue to attend Mechacon as long as I'm able.