All About Brusho- Watercolor Basics

Brusho is one of my favorite hidden watercolor gems.  Mainly marketed at crafters in the US, these dye-based watercolors arrive in powdered form, and are highly water reactive.  Every 'color' is really a myriad of tones, and some colors, such as black and gray, contain reds, oranges, and blues.  Utilized with a light hand and discretion, Brusho can add a lot of life to your watercolor process.

Brusho is made by Colourcraft, a company located in Sheffield, England.  They make and distribute a variety of art and craft products including materials for printmaking, fabric art, sketching, and art educational books.  They carry brands such as Golden Artist Colors, Liquitex, Gelli plates, and Koh-i-noor as well.

There are a number of powdered, dye based watercolor products on the market besides Brusho-Ken Oliver Colorburst and Magicals and Magicals Shakers are all products have properties similar to Brusho, and are used in a similar manner.  I only have experience with Brusho, but I have included reviews for the other products in the Second Opinions and Outside Resources section at the bottom of the post.

Colourcraft claims that Brusho will hold up over time, but being dyebased, Brusho is not lightfast nor archival.  Please take adequate precautions to protect your work.

I love using Brusho to add vibrant splashes of color to my watercolor work.  Brusho dyes are vivid and intense, and make for fun backgrounds or light embellishment within individual panels.

Unbox and Swatch-Brusho for Splatter Effects on Watercolor Paper 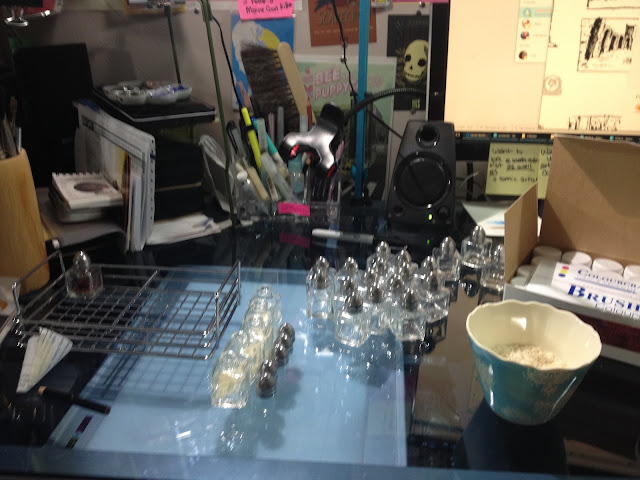 This is a fairly time consuming process, even with the recommended plastic funnels.  I recommend you fill the salt cellars halfway with something that will absorb moisture (I use rice in this instance, but you could use silica if it's large enough not to go through the holes) beforehand, and then apply the Brusho on top.  Eventually the two will get mixed, so you want something that won't effect the Brusho (rice has starch in it, which can cause blooming with water) 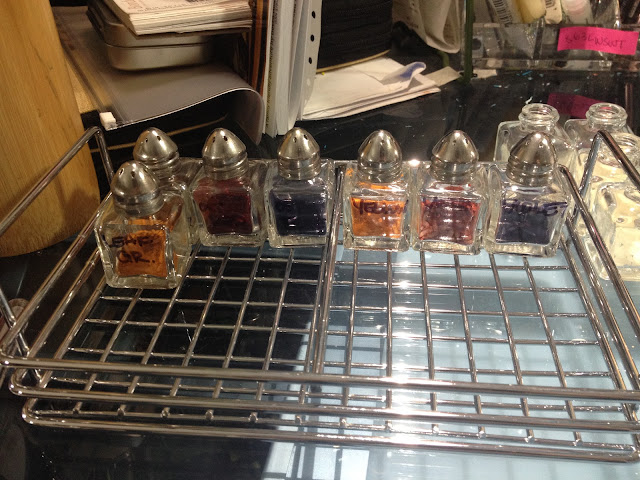 As you fill your salt cellars, it's helpful to label them with the color names. 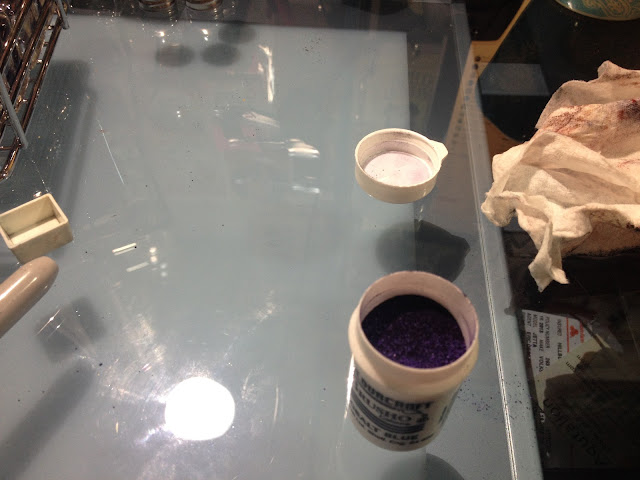 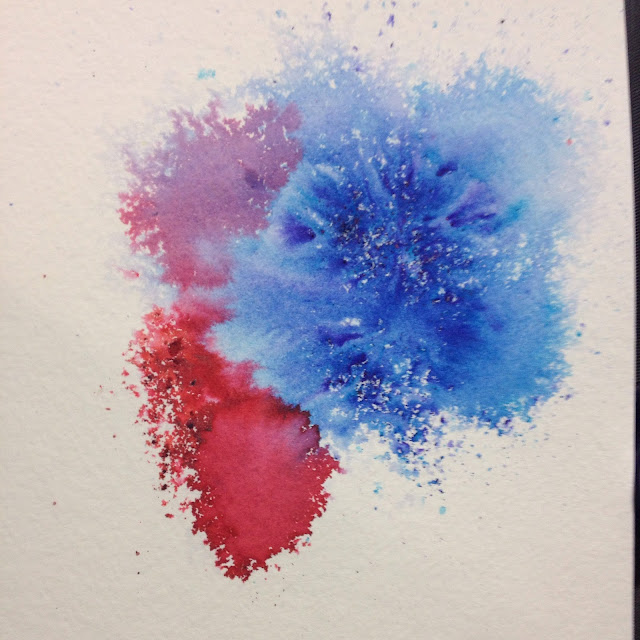 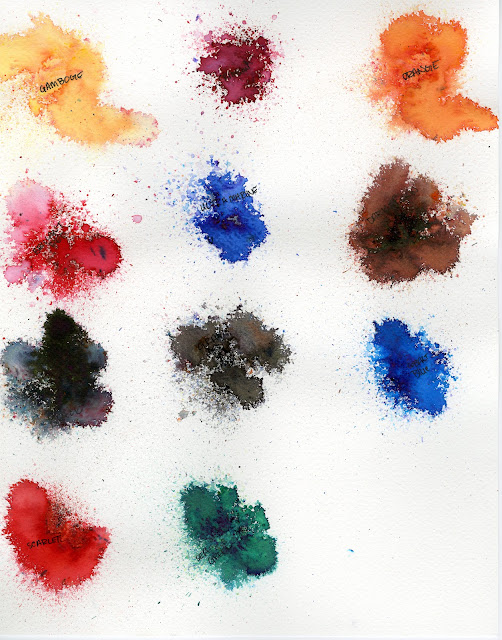 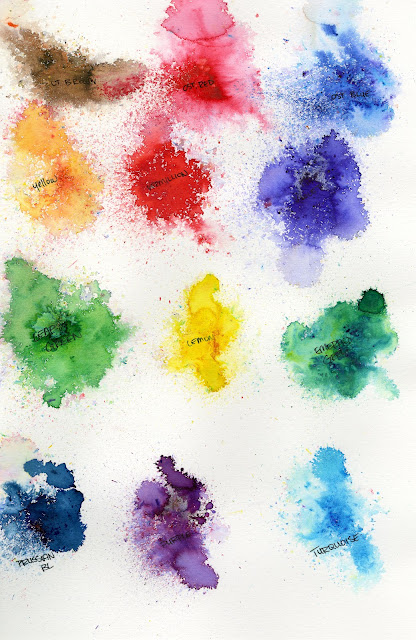 Brusho can be a fantastic way to liven up backgrounds or planes of color.  There are numerous ways you can use Brusho in this manner: 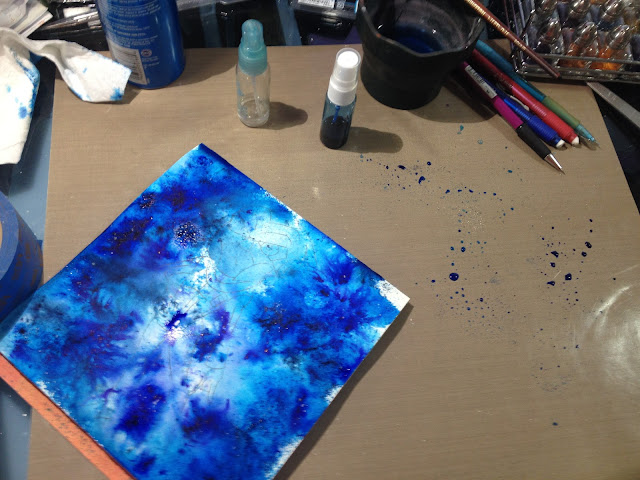 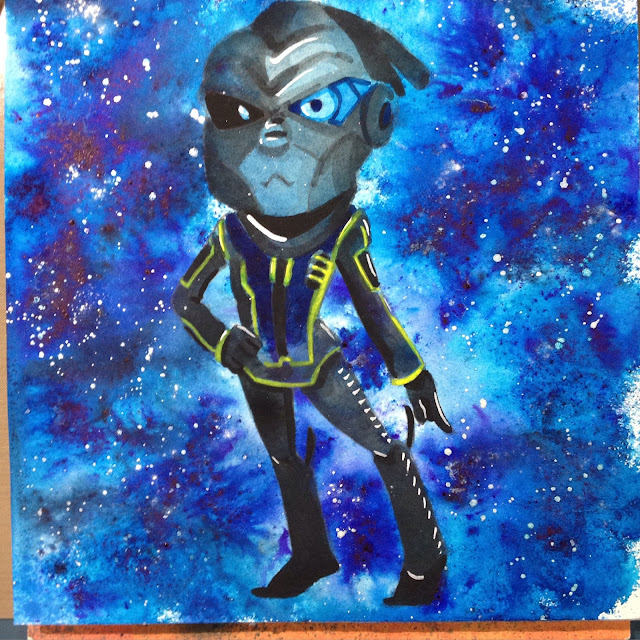 With this Garrus commission, I did not mask or preserve Garrus, I simply used the Brusho background as a base for his colors. 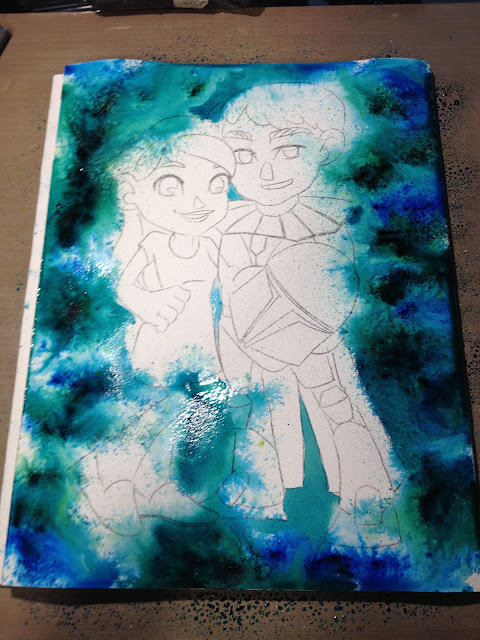 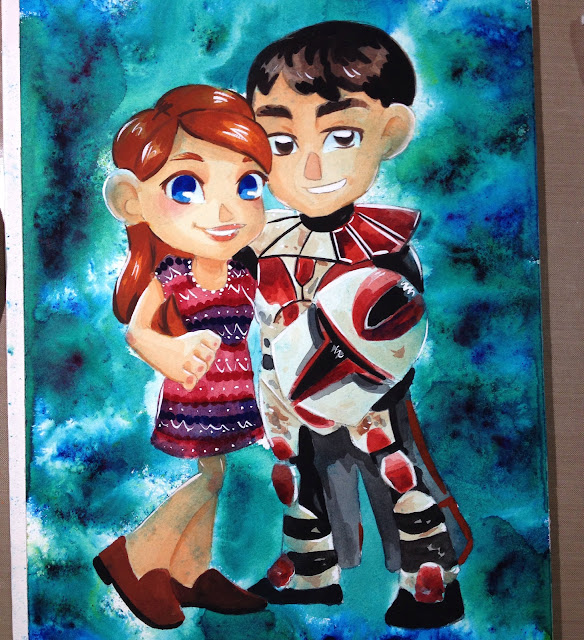 With this couple commission, I did reserve the figures (simply by not wetting or covering them with Brusho), but Brusho has a strong tendency to get everywhere.  Fortunately the faces were fairly clear of Brusho, so this wasn't much of an issue. 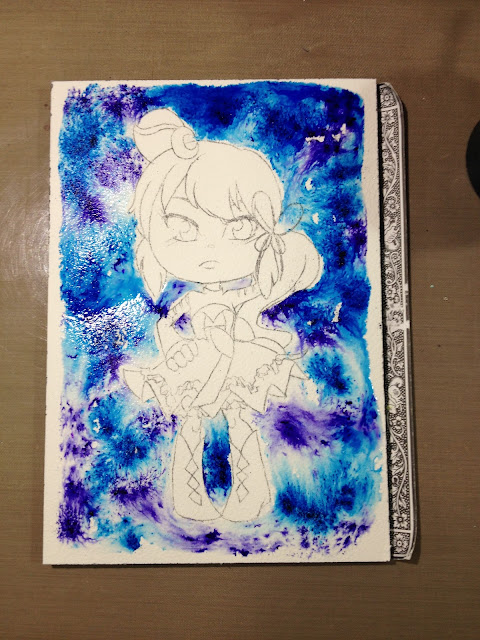 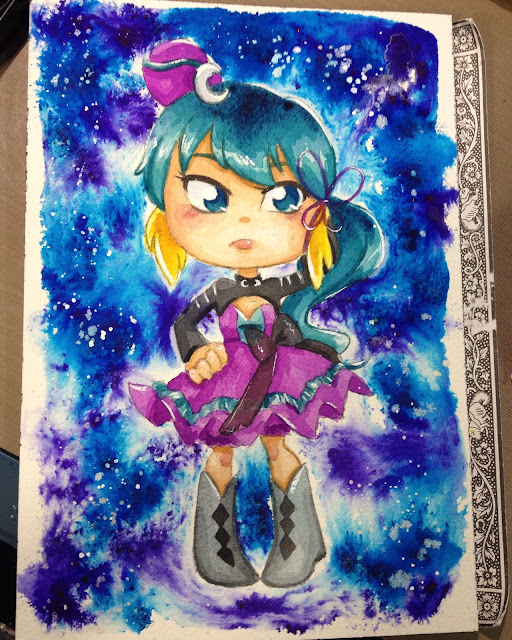 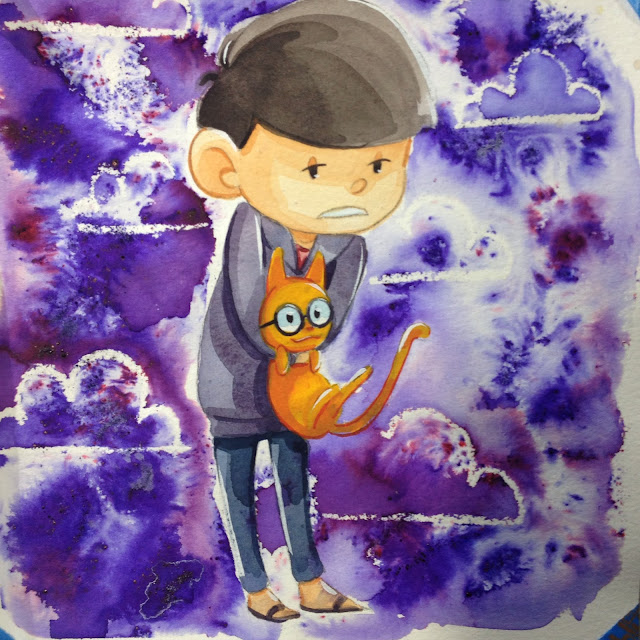 With this last commission, I used clear wax as a resist around the figure, creating a bit of a barrier between figure and Brusho.

Because Brusho is a water reactive dye, it may continue to reactivate as you paint.  I've found it helpful to 'fix' my Brusho- activate it with water, allow it to dry, brush away the excess, and then apply a wash of clean water to the area I've reserved to activate any residual Brusho.  Then, I quickly apply a clean paper towel to soak up water and hopefully some of the Brusho.  The reserved area may be tinted the color of Brusho, but at least there won't be any unpleasant surprises!

You can reserve areas in a few ways- using Masking Fluid, or using wax resist.

These techniques are a great start for using Brusho!

Among Brusho enthusiasts, there's a plethora of techniques for you to explore!  Below are just a few slightly more advanced techniques- none really require any special skills, but they may require more masking.  For even more tutorials, I recommend checking out my Outside Sources and Second Opinions sections!

A Garden of Color-Brusho Watercolor Demonstration

Brusho for Moss and Sky Tutorial 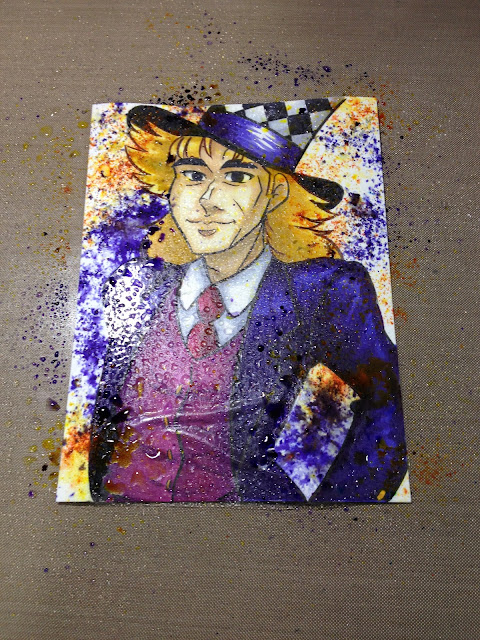 With this illustration, I finished the marker component before masking that off, then applied the Brusho.

With Masking Frisket and water, seepage can occur, but it is fairly minimal if you don't repeatedly soak the paper, and can be corrected with Opaque White. 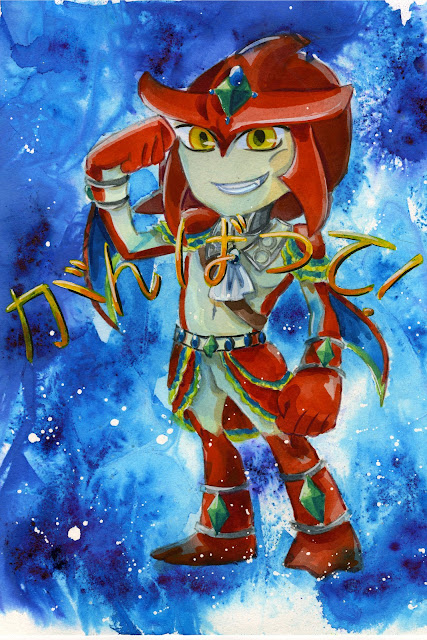 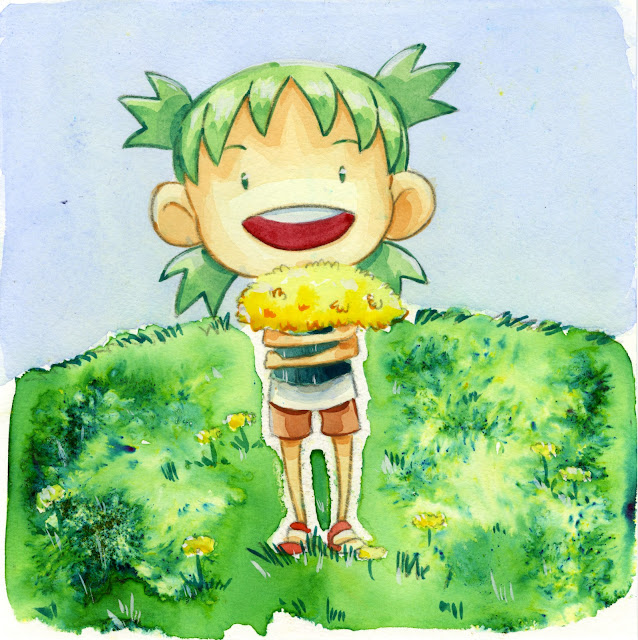 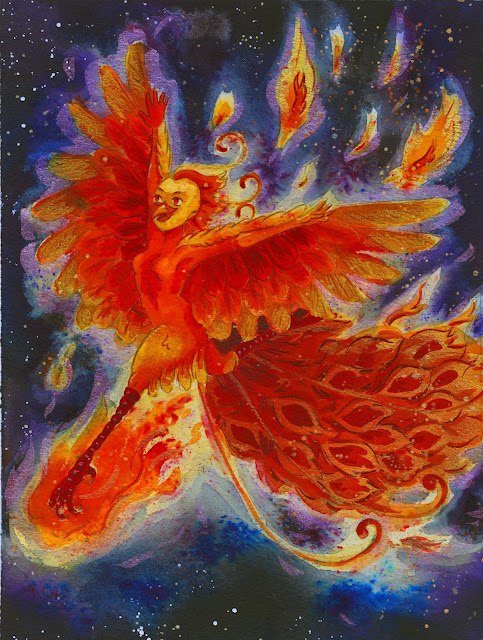 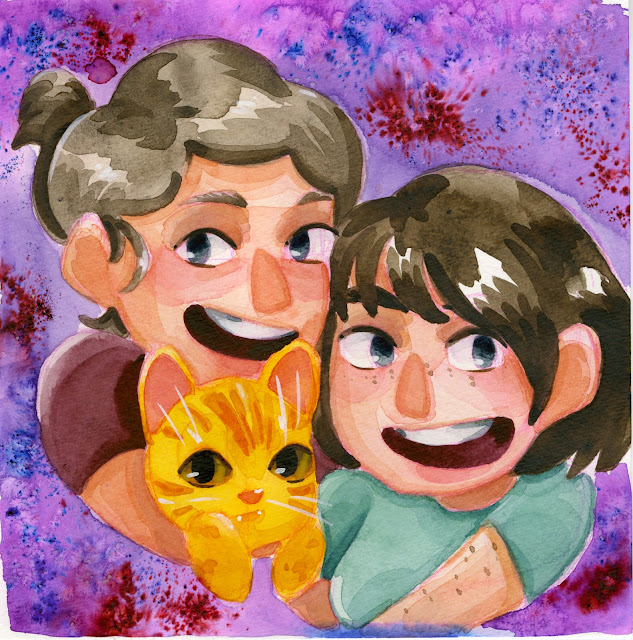 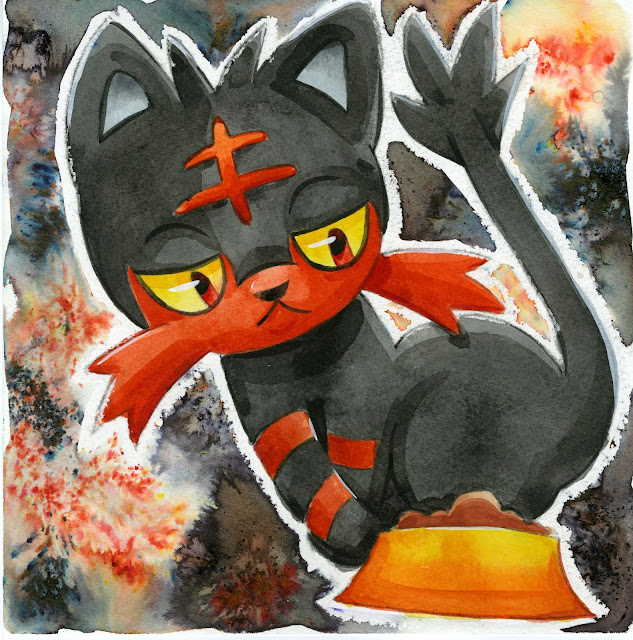 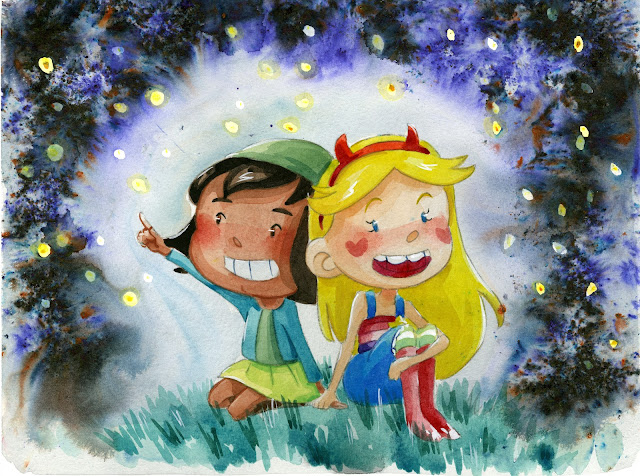 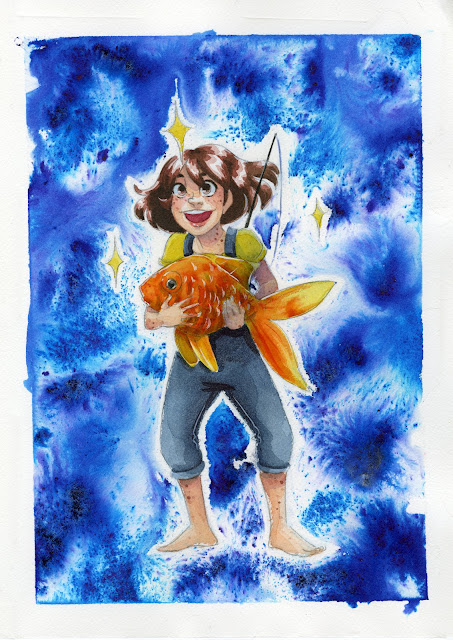 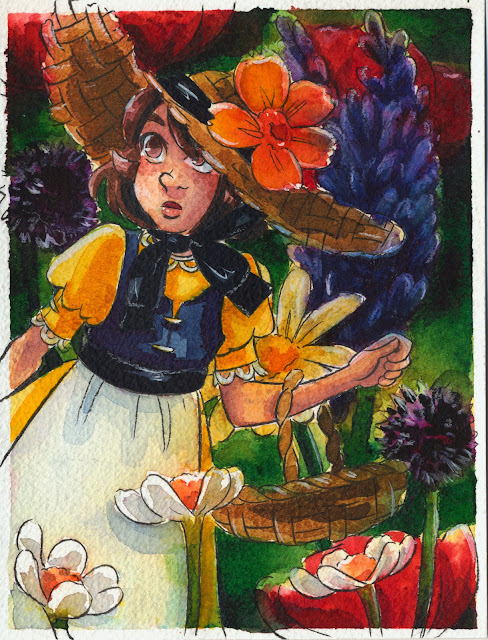 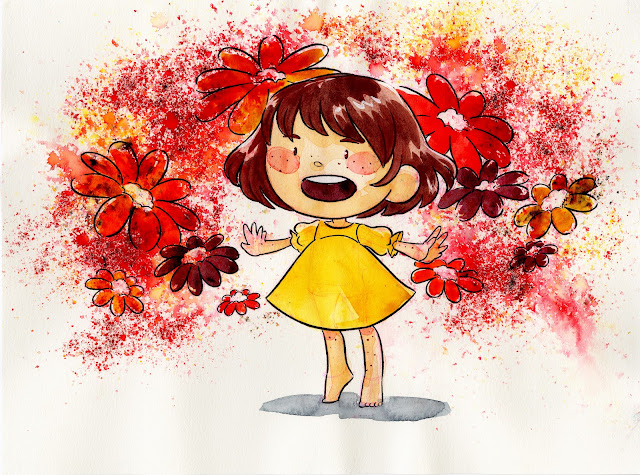 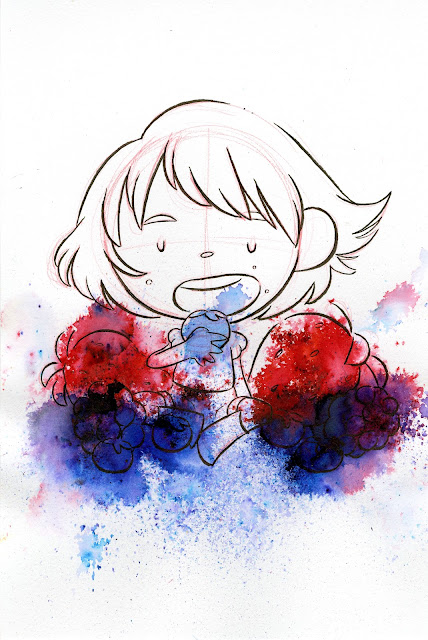 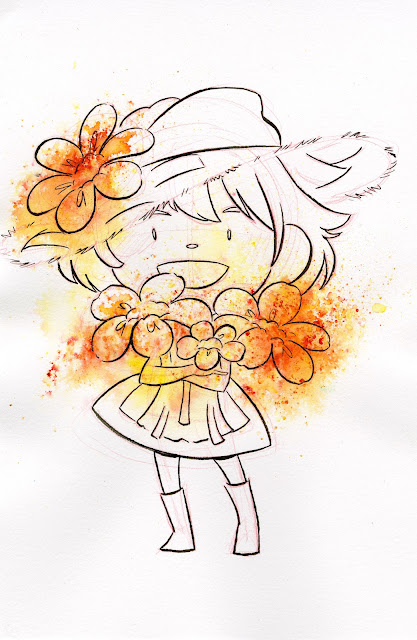 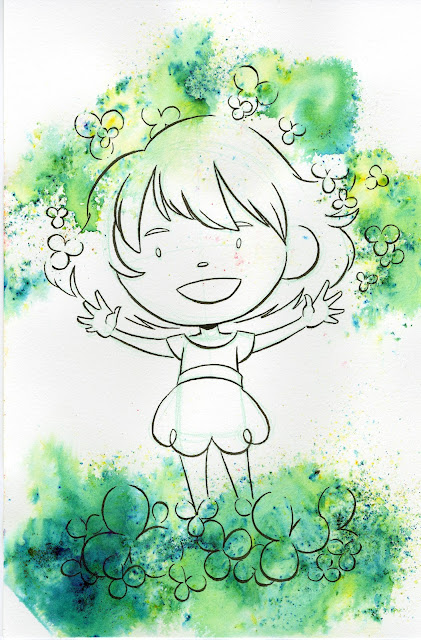 I've used Brusho frequently in my art and illustration for over two years now, and can honestly say it's changed the way I work, and the quality of commissions I offer at conventions.  I love playing with Brusho, and introduce it frequently into my work.  That said, it can be messy, it has a tendency to get EVERYWHERE, and can sometimes be a challenge to control.  Even with its flaws, I think Brusho is a great addition to your studio or craft space, and encourage you to try it yourself!

Get Your Own:
Blick
Amazon


This post was brought to you thanks to the generosity of my Artnerds on Patreon! 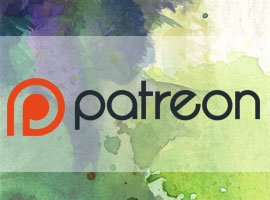 Their continued support and encouragement helps off-set the costs of purchasing supplies fo review, hiring guest writers, and paying a video editor.  If you enjoy content like this, and wish to help make it possible, please consider joining us on Patreon!  Pledges start at just $1 a month, and Artnerds gain early access to video content

Second Opinions and Outside Resources: