Edit: Last year it was alcohol based markers, this year it's all about water and watercolor markers. If you enjoyed this post, please consider checking out my other art supply reviews in my Reviews tab above.  If you would like to purchase a set of Tombow ABT watercolor markers for yourself or a friend, please consider supporting this blog financially by using my Amazon affiliate search link for Tombow ABT markers.

As this blog is completely unsponsored, and I receive no financial compensation from companies to write these reviews, nor do I receive donations from manufacturers, I really depend on the goodwill of my readers.  If you benefitted from this post, please consider contacting Tombow with a link to this post (or any of my many other Tombow product reviews)and your thoughts.  I would also sincerely appreciate it if you sent me an email with your thoughts, questions, or thanks.
Editor's Note: Google Drive has failed to upload a large number of the process photos for the Field Test, so I've had to retake the photos that I can.  Even worse, Blogspot ate the original post for this, so I'm rewriting it.

It's probably not a secret, but I am a hoarder of art supplies.  I'm also a hoarder of comics, but that topic rarely comes up on this blog, I just felt it was worth mentioning.  As a hoarder of art supplies, sometimes I purchase things, with the intention of reviewing them, and I don't get around to it for a long time.  I bought two different packs of Tombow ABT watercolor markers from the DickBlick on Broughton St in Savannah, GA, back in 2013, and I didn't get around to reviewing them until recently.

I have two legitimate obsessions that I write about on this blog:  Brush pens, and watercolor markers.  Sadly for me, it's my alcohol marker reviews that bring in the most pageviews, but hopefully in a couple years, that'll even out with my watercolor marker reviews, which I feel are better rounded and more useful.  I've reviewed Neopiko 4's, Marvy LePlume II's, Docraft Artiste Watercolor markers, Winsor & Newton Watercolor Markers, and Letraset's Aquamarkers, and it seems like I'm always discovering new watercolor markers to test out.  These Tombow ABT's have been on the market for awhile, and I've had a mixed relationship with Tombow Products, but I hoped that these markers would work well, both with and without water.

There are a couple ways to blend Tombow ABT markers:  Using the blender marker (shown in this review, but these photos were taken after the initial tests were done, so I'll have to revisit these markers) and using water and brushes.  You can also use a waterbrush, if you like, but I feel this falls under the water and brushes category of blending.  I'm not sure what's inside their blender pen (hopefully I'll find out soon!), but I hope it offers different blending techniques than just water.

For this review, I'm taking the brush and water route, using a traditional sable brush and a good old cup of water.  Not shown: How many times I had to chase my cat, Bowie, out of the water cup.

As stated before, the pens shown in this review are really two sets:  Although I purchased them from a brick and mortar DickBlick, they no longer carry the 10 piece set I purchased.  They do, however  a variety of other sets.  I did manage to find the same 10 piece portrait set on Amazon.  This set was later augmented by a pastel set, which doesn't seem to be easily attained anymore.  No matter, it's not like the pastel set was the best thing since sliced bread, I just happened to like pastels.

These Watercolor Brushpens are dual tipped- one end is a Japanese brush, the other is a bullet nib.  I really wish marker companies would just give us two brushes- a big one and a small one, but I'm probably just spoiled.  I also hate bullet nibs.  These markers are not refillable, and the nibs are not meant to be replaced. 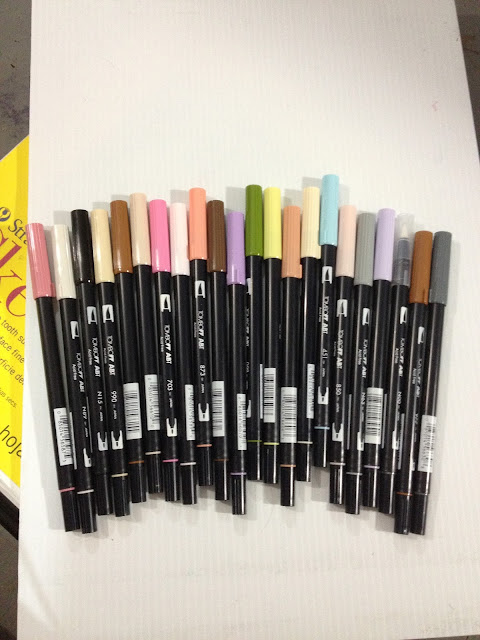 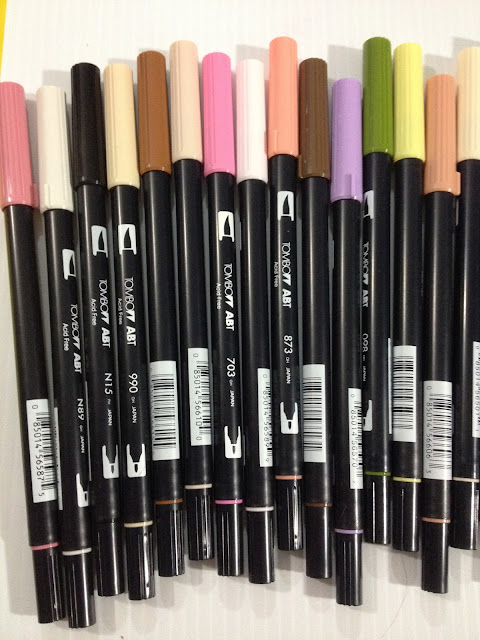 The barrels of Tombow ABT markers feature the color number, as well as indicators for the large brush nib and the small bullet nib. 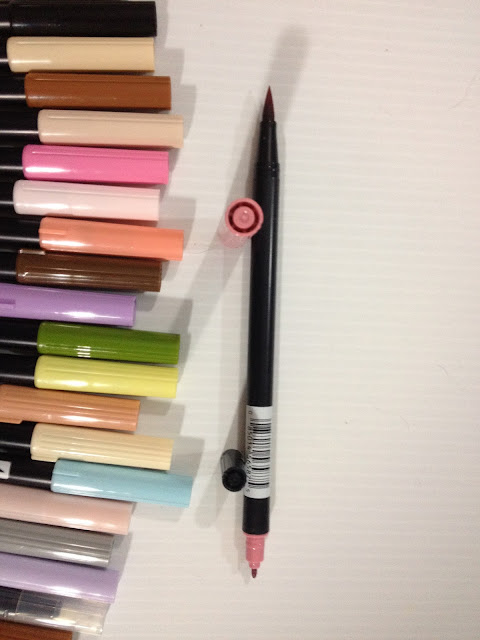 The bullet nib end's cap is the same black as the body of the pen, but the Japanese brush end has a cap that is roughly the color of the ink inside, 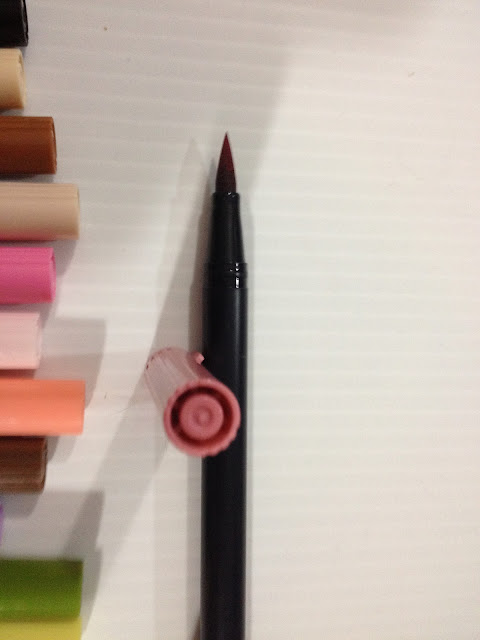 As with my prior Tombow dual brush pen review,the nib LOOKS like it would be squishy and flexible, but sadly it's fairly stiff, and prone to getting broken in and mushy.  One of my markers had also dried out over the two years it sat, but the others were still lively.
Here's a lineup of some of the watercolor markers I own, most if which I still need to test.  Not shown: Neopiko 4, Winsor Newton Watercolor markers, or the Letraset AquaMarkers, or the Akashiya Sai watercolor brushpens.
﻿

It's fairly common for watercolor markers or brushpens to have solid felt tips, rather than individual bristles.  If the marker is running dry, or the nib is too stiff, these solid nibs can cause damage to wet watercolor paper.
﻿ 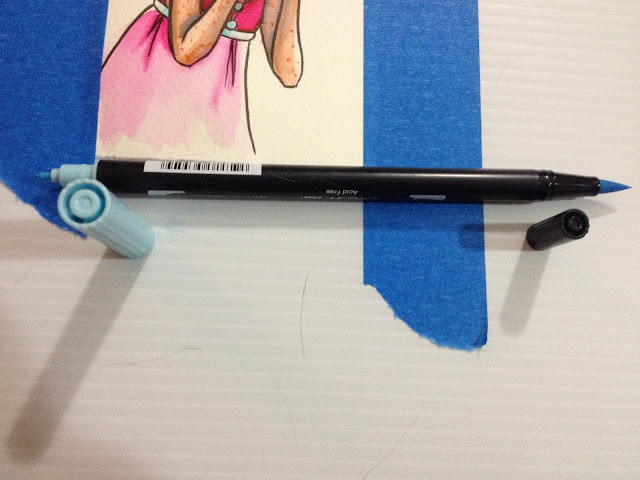 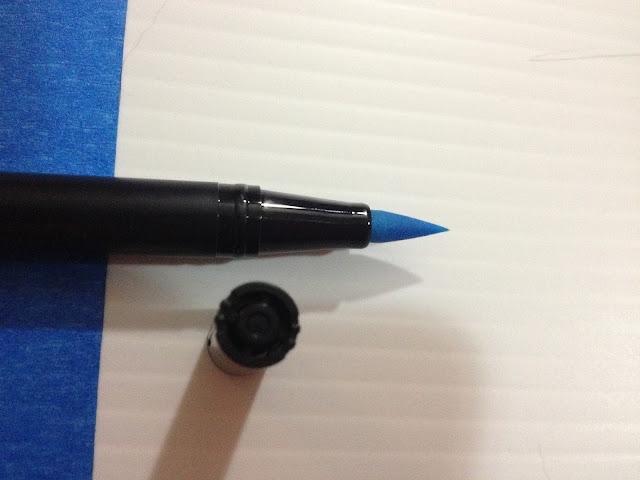 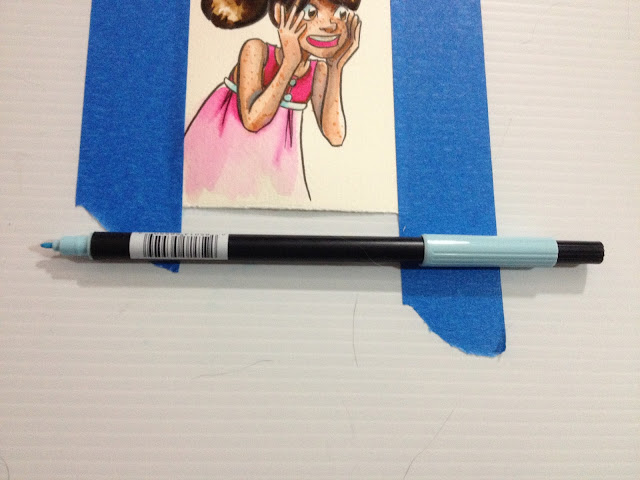 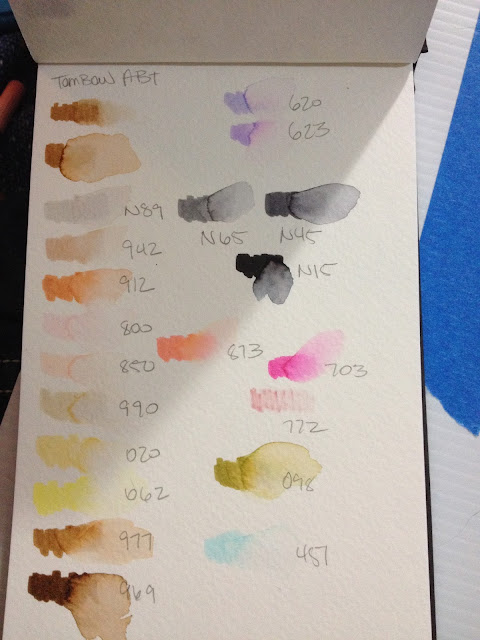 Color was applied to the paper, and water was used to blend it out.  I want to revisit these markers using the shown Tombow Blending kit, and see if I can't do a better job of things.  With water, there isn't much pigment or dye separation when water is applied, which is a good sign.

The sample piece was inked with a Sailor Mitsuo Aida brushpen from Jetpens. 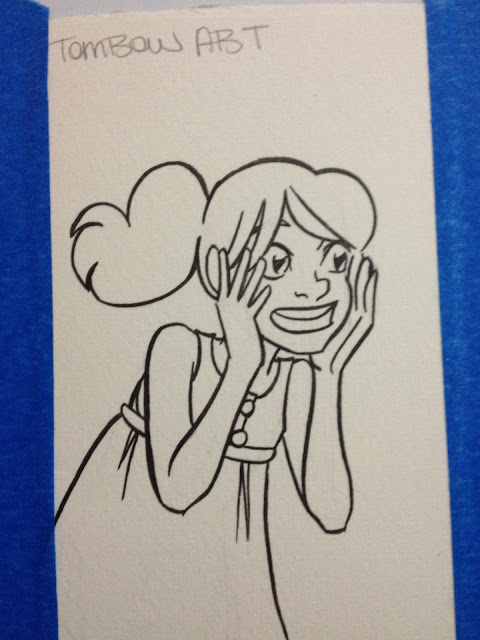 Unlike in the Docrafts Artiste review, I applied the color directly to the paper, and then used a brush and water to try and blend the color out. 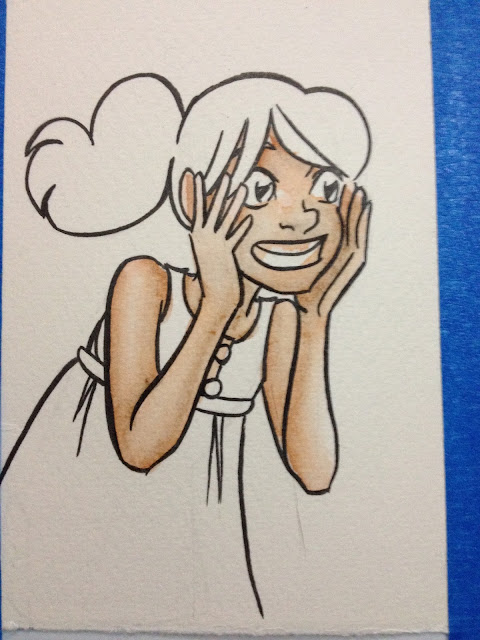 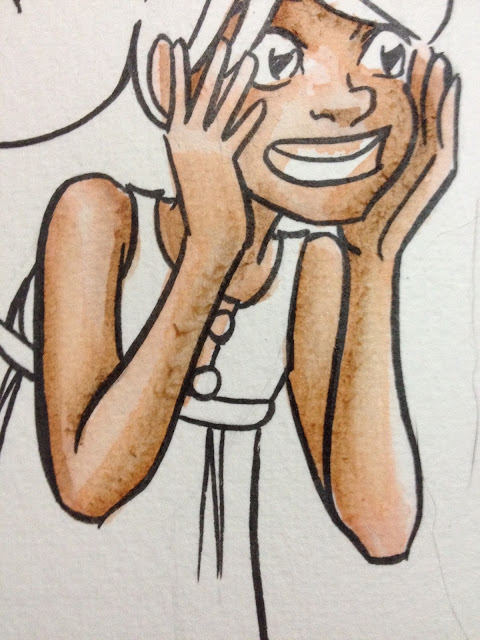 As you can see, applying color while the paper is still wet caused some surface damage to this Fabriano watercolor paper.  At the time this post was written, I hadn't considered utilizing a side palette, and you can see that color saturation is localized to where the color was first applied, regardless of how much water is applied afterwards.  The Tombow Blending kit comes with a laminated card, blending pen, and spritzer, and I'm excited to see if this kit will help solve some of the issues I came across with Tombow ABT watercolor markers while doing this review. 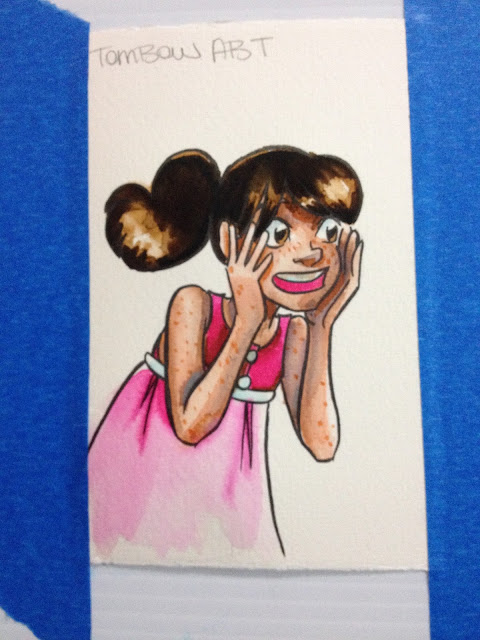 While working with these watercolor brushpens, I had a lot of trouble with blending, bleeding, and color replacement (like the shadows on Kara's arms, for example, the lavender completely pushed out the layers of peach, rather than layering on top, and the difference in color is harsh).  I also had issues with paper surface degradation from the stiffness of the Japanese brush nib, which kept me from working on this test as long as I normally would.  I've mentioned previously that I'm dissatisfied with the results of this test, and I would like to revisit it with different techniques later on.

While initial swatches proved somewhat hopeful, I was really unhappy with how these pens handled in practice.  The nibs were stiff and pulled at the watercolor paper, which caused the watercolor paper I used to pill.  This is a common issue with this soft cotton based Fabriano watercolor paper, so if you like using watercolor markers, you may want to use something paper pulp based, like Fluid pads.

I also discovered Tombow blending kits, and a method of creating a side palette, after I tested these watercolor markers, so I want to revisit Tombow ABT in the future and see if my opinion changes
any.

Craft Test Dummies Video Review of the Tombow ABT

Did you find this post useful?  Did you enjoy it?  How about sharing it with friends on Facebook, or Tweeting it to your followers?  The links above the post make sharing SUPER easy- you don't even have to leave the page!  If you really liked this post, or any of my posts, how about sending me a tip via Paypal using the handy donation link in the sidebar, or writing me an email?  It would definitely make my day!
Email Post
Labels: art supplies art supply review Tombow Tombow ABT Tombow Dual Brush watercolor brushpens watercolor markers