Last year it was alcohol based markers, this year it's all about water and watercolor markers. If you enjoyed this post, please consider checking out my other art supply reviews in my Reviews tab above.  If you would like to purchase a set of Marvy LePlume II watercolor markers for yourself or a friend, please consider supporting this blog financially by using my Amazon affiliate link for Marvy LePlume II markers.


As this blog is completely unsponsored, and I receive no financial compensation from companies to write these reviews, nor do I receive donations from manufacturers, I really depend on the goodwill of my readers.  If you benefitted from this post, please consider contacting Jerry's ArtaRama (where I purchased mine openstock) Marvy with a link to this post (or any of my other Marvy product reviews) and your thoughts.  I would also sincerely appreciate it if you sent me an email with your thoughts, questions, or thanks.

Marvy LePlume II are Marvy's waterbased, "watercolor" marker.  They're unusual in that there's a fineliner nib rather than a bullet nib, and a "Japanese" brush nib.  I can't seem to find them on the Jerry's Artarama website, but they're available on Amazon, and tend to run $2.50 a marker openstock at an actual Jerry's location, making them quite affordable.  I noodled around with them in the store on the tester paper, and liked what I saw- easy bendability, the blender marker seems to work, so I bought several in common tones and brought them home to test. 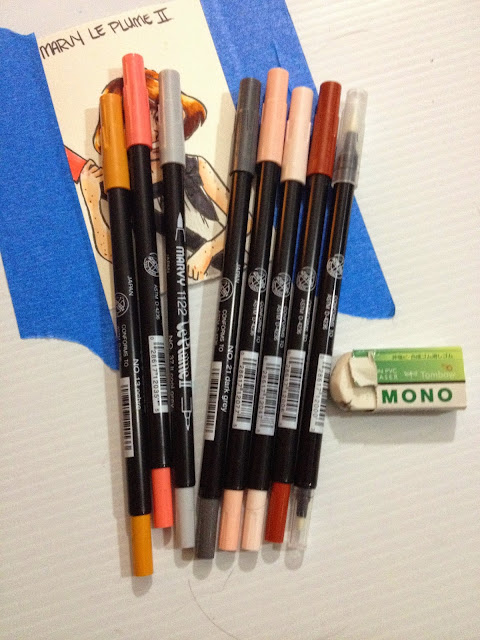 So I bought a decent handful of Marvy Le Plume II's, mostly Kara colors.  Two skintones, a blushy pink, two hairshades, two gray scales, one blender.  I figured if these worked out, I could branch out to a better rounded collection that focused on a variety of skintones. 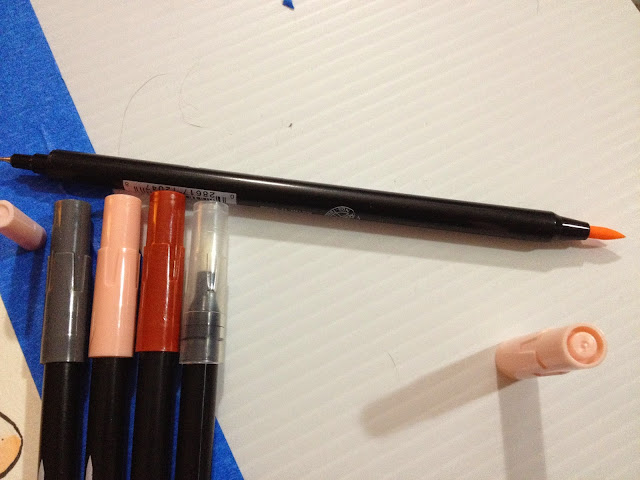 These markers are really unusual, at least to me, as one end is a fineliner and the other is a large brush nib.  I was really hoping the large brush nib would be as flexible as the Copic's Super Brush, but unfortunately, it's pretty stiff. 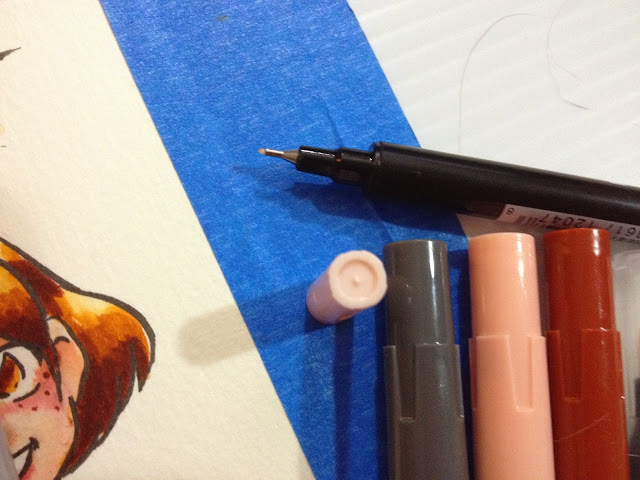 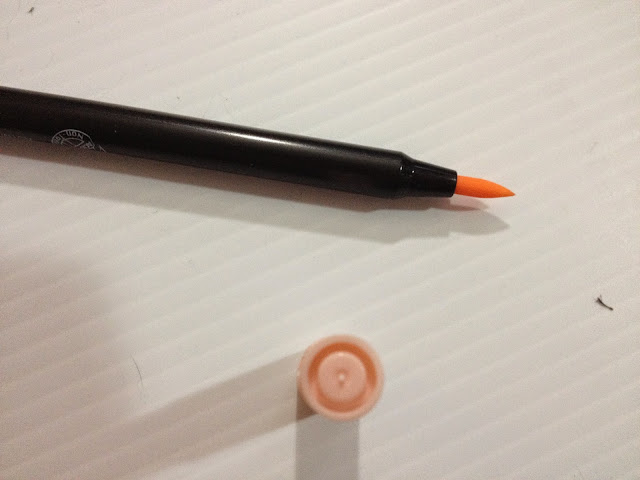 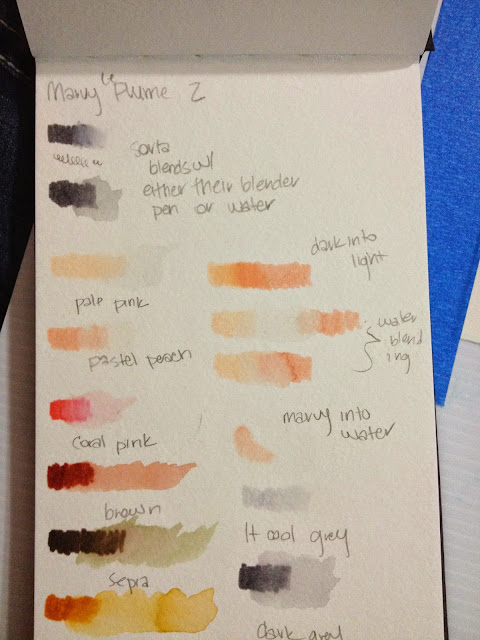 So far so good.  All the colors I purchased stay pretty true, even when water has been added.  Not all of them distribute their pigments equally (dark grey is a bit resistant), so that's something to keep in mind if you want to use these for 'painting'.

For the purposes of this review, I sketched out a little Kara, inked her with the Sailor Mitsuo Aida, as it's waterproof and a fude pen, and let that dry for 24 hours before erasing the pencil.  I then taped that sucker down, and started laying down some color.  I used  Fabriano Medioevalis 208 S, because I have a 100 pack of these little cards, which is a fairly soft watercolor paper. 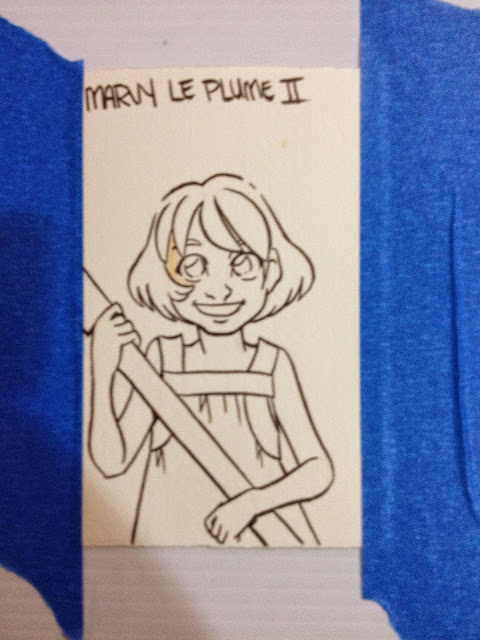 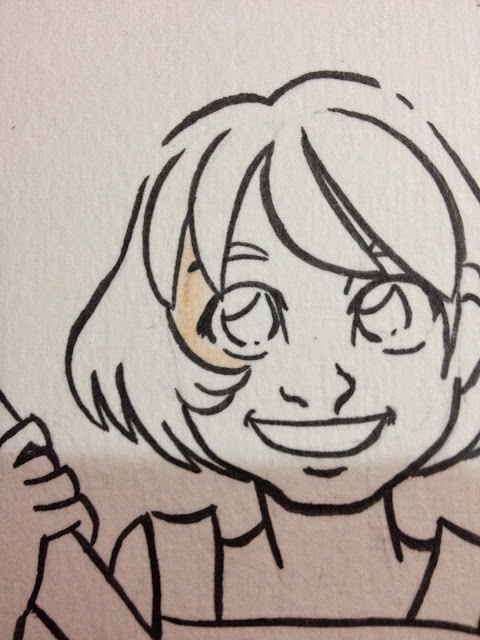 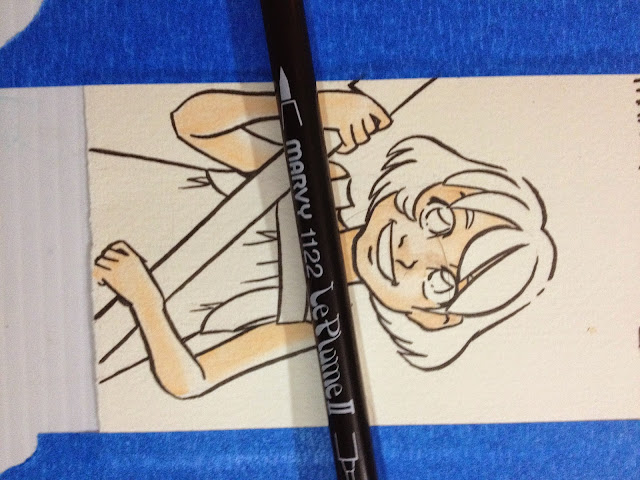 For this test, I wanted to emulate watercoloring with these waterbased markers, so I used a cup of clean water and a watercolor brush for blending. 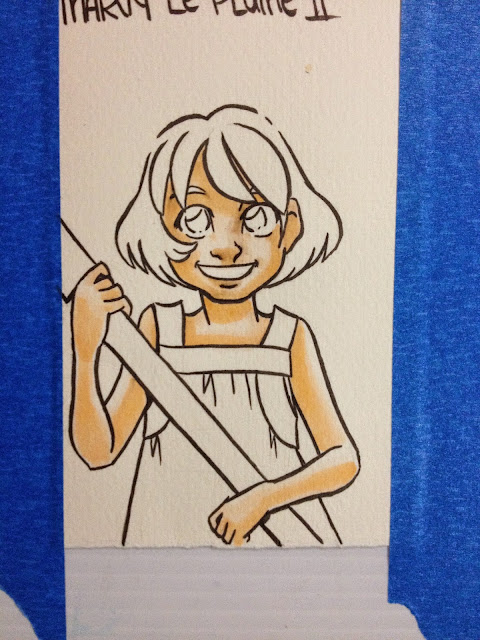 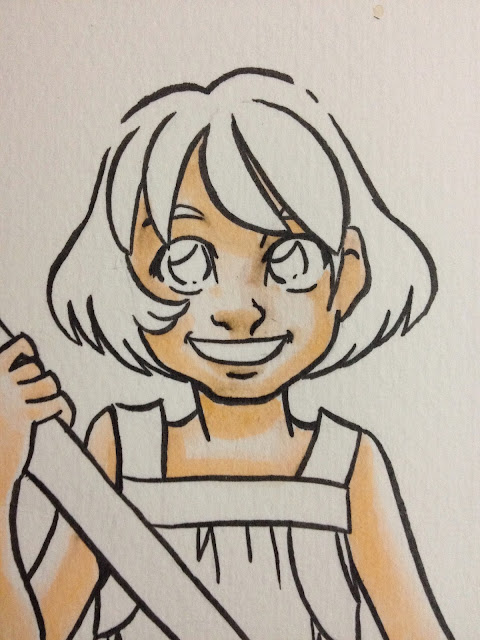 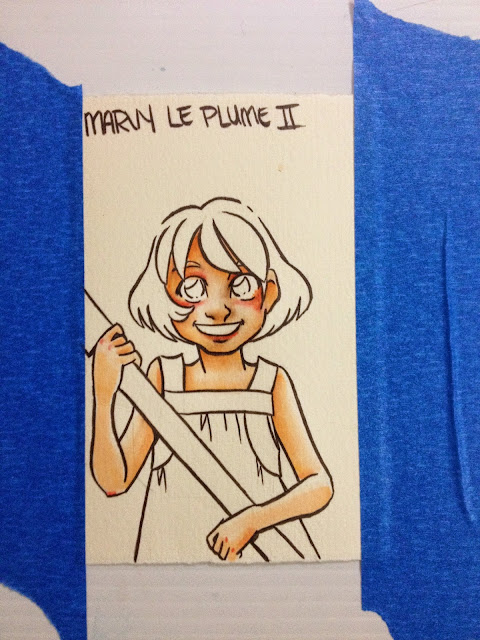 The Marvy LePlume II's felt tipped large brush isn't nearly as flexible as I would like, and I feel like that's affecting my ability to use it as a brush.  Because the brushes are so stiff and a little dry, they pull on the ink (even if it's dried 24 hours) the same way a dried out Copic will, smearing the black ink.  This is REALLY noticeable with skintones. 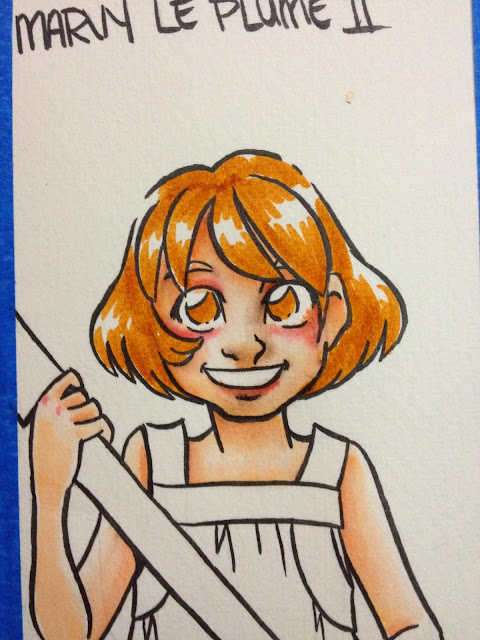 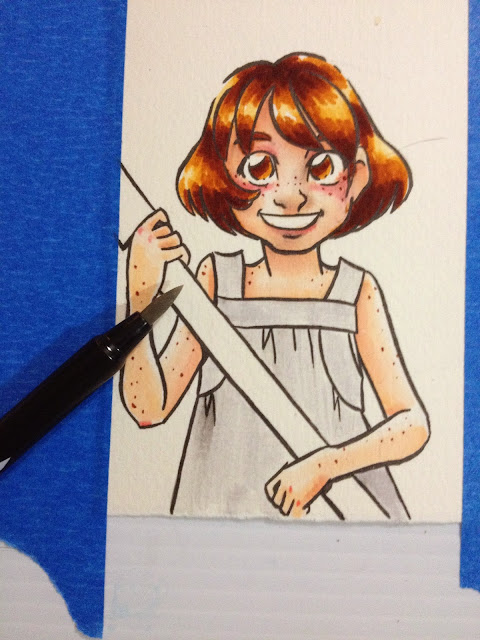 In many respects, the Marvy Le Plume II's handle somewhat like Neopiko 4's- they can blend out with water (although some colors require a little scrubbing), they can be layered for deeper tones, and the initial application area tends to be the darkest. 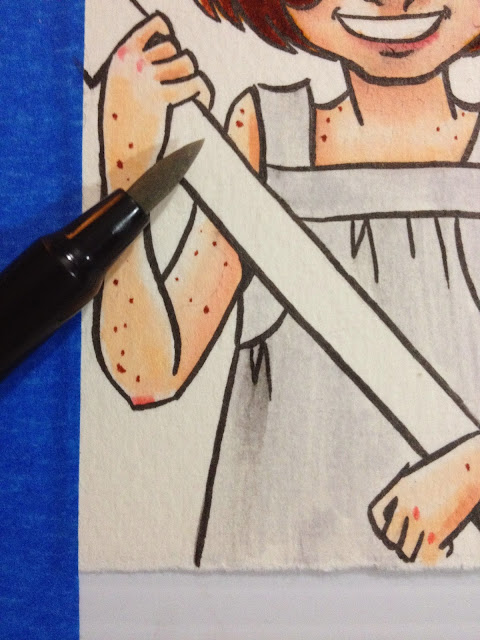 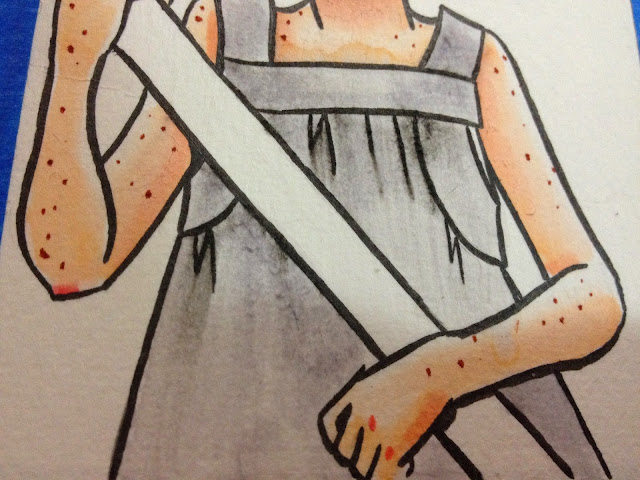 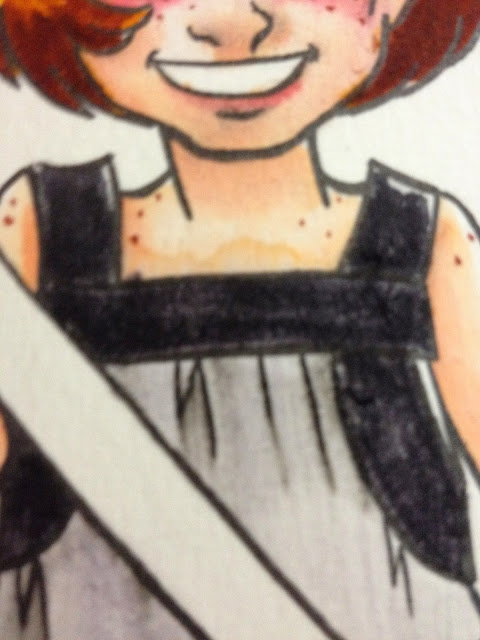 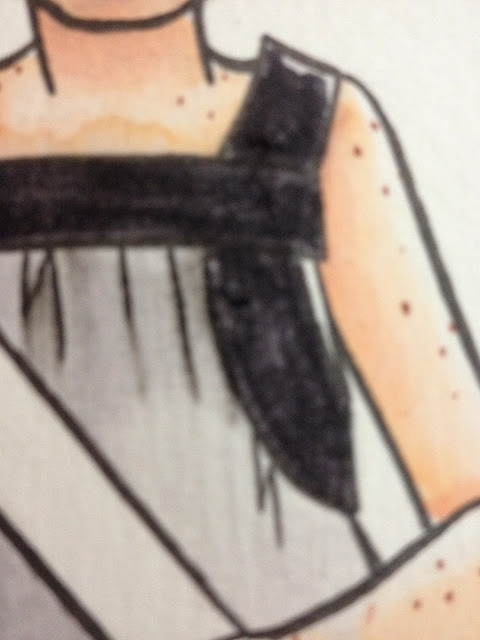 Unfortunately you can't see it, but repeated application while the paper is still fairly wet did cause pilling.  I'm not sure if it's the stiff Japanese brush on the Marvy LePlumeII, or the fault of the watercolor paper itself.  I SUPPOSE THIS REQUIRES EVEN FURTHER TESTING at some point. 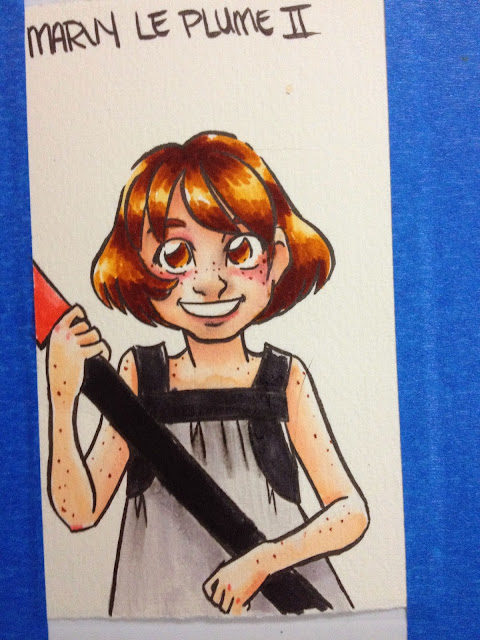 On Multimedia Paper, Using The Blender to Blend

For this test, I wanted to use something that was more geared towards dry media, but I didn't want to grab the plate Bristol or Copic paper just yet.  I was thinking about cardstock, but I ended up settling on this Multi-Media sketch paper from Art Alternatives.  I think I was given this as a sample a few years ago, so no better time to test than years later, right? 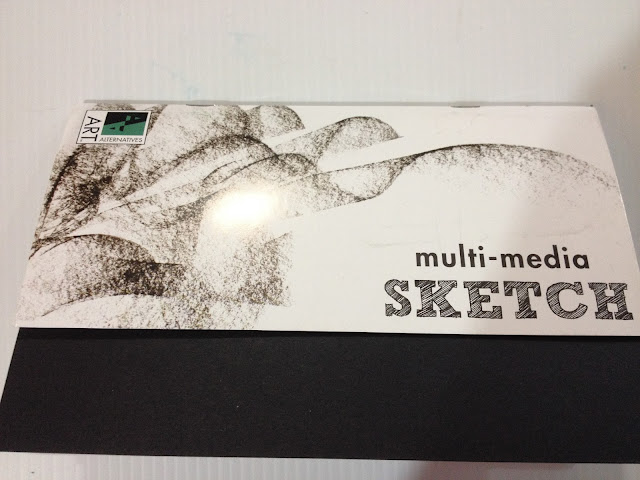 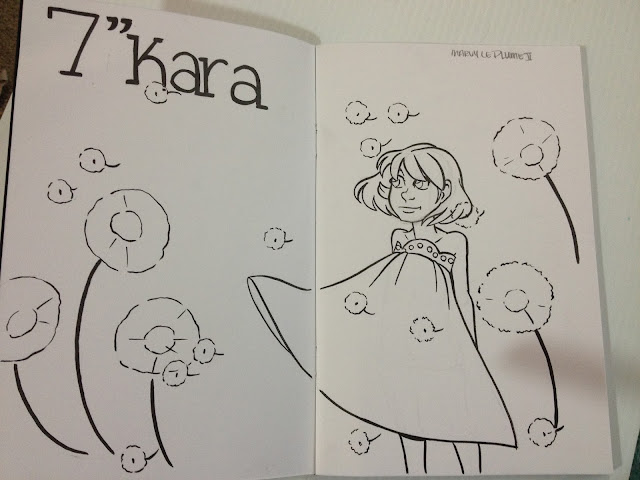 While still recovering from vicious Animazement con crud, I whipped out this sketch and inked it with the waterproof Sailor Mitsuo Aida double sided pen.  I let the ink dry overnight.

I intended to start coloring this piece today with the Marvy Le Plume II's, but fortunately, I did some swatches on the paper beforehand, and had an unpleasant surprise. 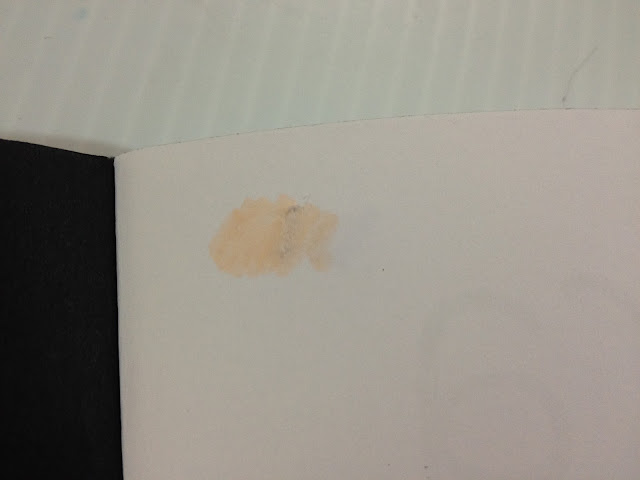 The blender pen causes pilling and wrecks the paper!  YAY! 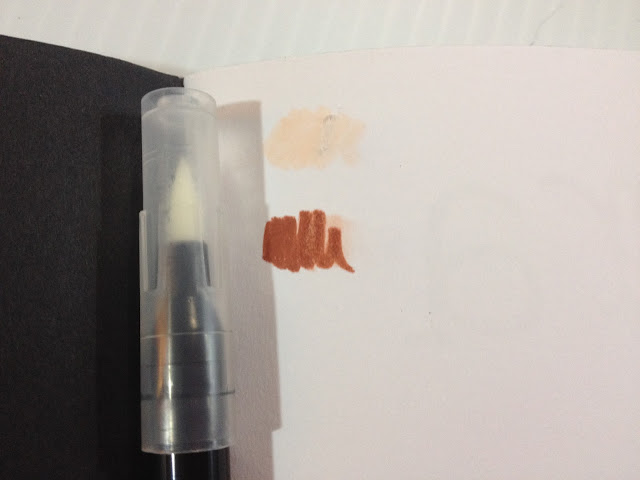 And the blender doesn't really do much blending.  What solvent is Marvy LePlumeII using in this anyway?  If it's just a waterpen, a better solution would be a refillable waterbrush, or an actual brush. 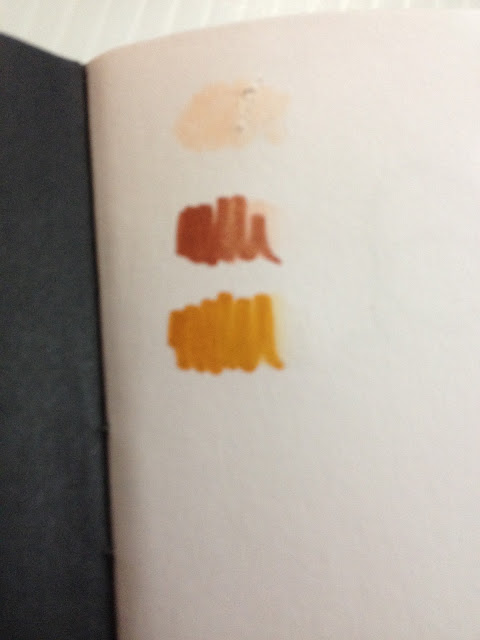 Given how these markers performed in just a test, I decided NOT to use them on my test illustration.  I tell a trainwreck is a trainwreck before the train even hits the cow.

I hate to admit, I'm honestly really disappointed with the Marvy LePlume II's.  I'm not sure if the issue is me or the markers themselves, but the blender pen always seems to tear up the paper I try to use it on.  I just really wanted these pens to work, and while I've tried a few papers, I haven't find one that works yet.  The inked sketch I generated to test the dry usage of these pens is too nice to waste on pens that will just eat up the paper, so I'm going to use my Neopiko 4's on it instead, and change that test to a test of the 'multi media' quality of the Art Alternatives Sketch paper.  If you can use the Marvy LePlume II's successfully, or know of someone who does, I'd really appreciate if you linked me to a process post, because I'd really like to start using waterbased markers in addition to alcohol based markers in my work.  Given how many of these kinds of markers are on the market (Marvy, Tombow, Zig- I'll be reviewing those soon), surely SOMEONE can get them to work, and I probably just haven't hit on the rigtht paper and the right process.  However, if you intend to use them the way I've shown here, I strongly advise that you avoid them.

Waterbased markers tend to be quite a bit cheaper than all but the very cheapest of alcohol based markers (the Finecolour's, I believe), and I think if I could just get the hang of them, I could turn a lot of broke artists on to them.  I like the colors, I like the brands that DON'T separate into individual dyes, but I'm having trouble finding a brand/paper/process that works.  If you don't mind spending just a bit more, I still highly recommend the Neopiko 4's as a waterbased addition to your marker collection, or the Winsor & Newton Watercolor markers if you want a nice hybrid that utilizes real watercolor pigments.
Did you find this post useful?  Did you enjoy it?  How about sharing it with friends on Facebook, or Tweeting it to your followers?  The links above the post make sharing SUPER easy- you don't even have to leave the page!  If you really liked this post, or any of my posts, how about sending me a tip via Paypal using the handy donation link in the sidebar, or writing me an email?  It would definitely make my day!
Email Post
Labels: art supply review Marvy LePlume II review watercolor brushpen watercolor markers