So those of you who do conventions are probably pretty familiar with the gamut of credit card readers available on the market today.  There's Paypal Here, there's Amazon, Local Register, Intuit Quickbooks Payments, there's Square.  My bank, Capitol One, even offers one, although their rates aren't very competitive.  And magstrip credit card readers have been available to retailers for years, although out of the reach of most convention artists. The most popular three are Square, Amazon, and Paypal, and those are the three I see at conventions.  Below is a chart comparing their basic stats:

If you want to learn more about the above readers, I highly recommend you read Mobile Credit Card Readers: Comparing the Top 8 by Joseph Pisani.

I've been using SquareUp's Square reader for a few years, so that's the reader I'm the most familiar with, and those are the readers I'll be focusing on in this review.

Square's had a magstrip credit card reader available for years- it's free if you order it online, and $10 at places like Starbucks and Target.  A long time ago, they announced that they were developing a Chip Card reader, which got the attention of a lot of artists.

I paid $30 for this chip card reader over a year ago.  At the time, it seemed like they were almost ready to launch it- I figured I'd have it within a couple months.  Square also emphasized that once the new reader was launched, they would not only drop support for the original readers, but that the users were liable for any credit card fraud that occurred during the use of the original card readers.  They assured their customers that this new reader would help fight credit card fraud, and that we should not be liable for any that occurs if we're using the chip card reader.  While I had my doubts, I went ahead and ordered one, figuring I could at least review it for you guys.

I should mention that there is validity to the claim that EMV credit cards are more secure than the common magstrip cards.  According to The Nerd Wallet,


Take a quick glance at the back of a credit card, and you’ll probably see a thick black band. This is the card’s magnetic stripe. These bands are so vulnerable because the information that’s stored on them is unchanging, static data. If a skimmer manages to read the data off a card’s magnetic stripe, he or she can copy that information onto a counterfeit card and use it to make purchases.
Instead of a magnetic stripe, an EMV credit card is embedded with a small chip that encrypts your personal data. This chip generates a unique transaction code every time a new purchase is made. Instead of swiping the card, users place it into a card reader and provide a signature or PIN number. Because the card’s information changes after every transaction, data skimmed from it would be useless to a criminal. Certain EMV cards even work with near-field communication payment devices that allow users to simply tap their cards against payment terminals to make a purchase.

And it is true that merchants who haven't switched over to a system that accepts EMV cards will be held liable for fraudulent charges by October 1, 2014, but it seems like EMV cards still aren't the standard in the US, especially for debit cards.

So while I waited for my Square EMV reader to arrive,  I continued to use both the original Square reader, and the second generation's more finicky reader with no significant problems, even after October 1st.  The original two readers do not require charging, are fairly small, and plug right into your phone.  While both can be picky about how they read cards (and both grew even pickier as time progressed), I found that if you pinched the reader while you scanned, it read cards a little better.  Even so, at my last couple cons, I found myself typing in more and more transactions because the readers weren't able to read people's cards.  This was frustrating, because not only did it take more time per transaction and required me to ask personal questions of the buyer, but it also meant I was paying more per transaction for an issue that may be Square's fault.

Anyway, my EMV reader from SquareUp finally came in, and I thought I'd share my thoughts with you guys, as there's been a bit of contention in the artist alley community as to whether it's worth the money.  This review may be revisited as I attend conventions and put the new reader through it's paces, so check back from time to time if you're interested.

This review is going to be pretty much like my pen reviews:  Packaging, the Item Itself, Field Test, Verdict. 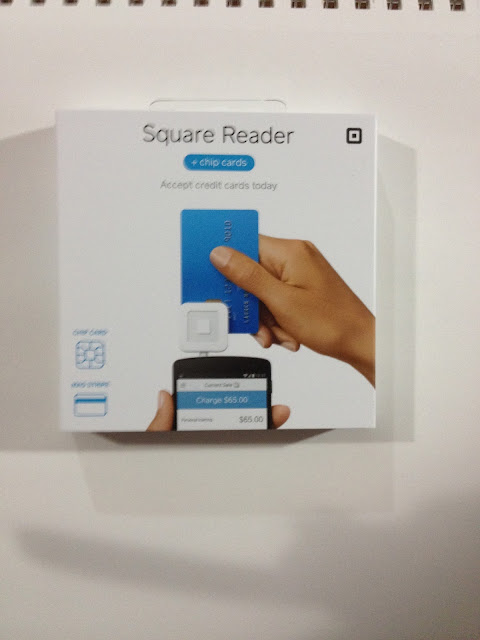 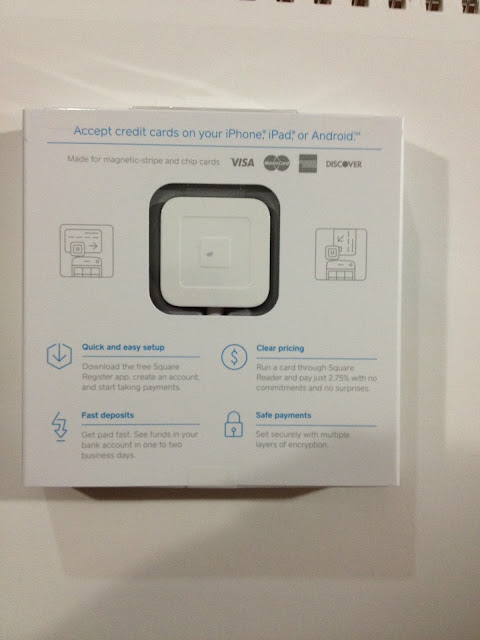 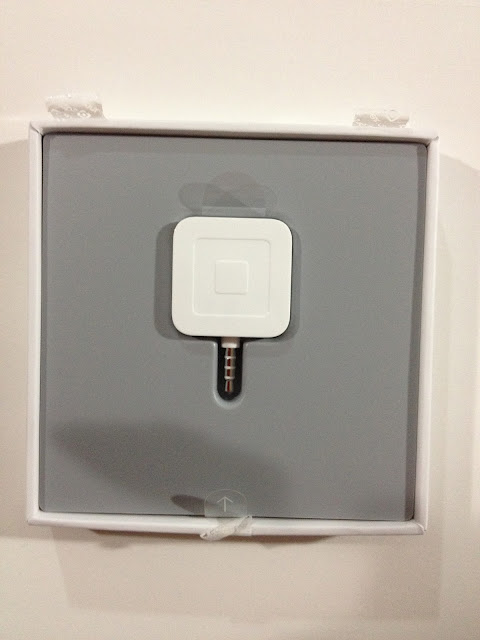 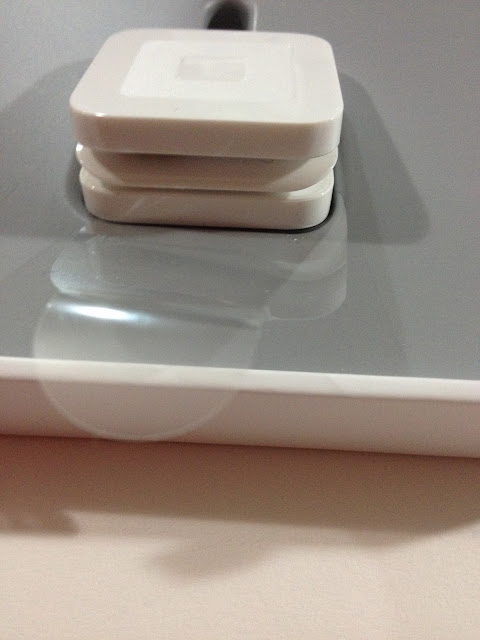 You can see here that there are two slots- a 'dip' slot EMV reader, and a swipe slot magstrip reader. 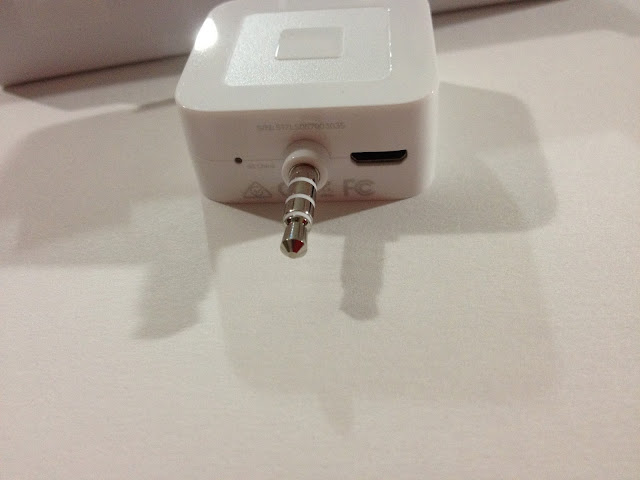 The underside has the charging port and the indicator light.  Unfortunately, should your Square die while you're using it, it isn't possible to charge it while still using it.  I wish Square had just enabled this reader to get its power from your phone, the same way the magstrip readers did. 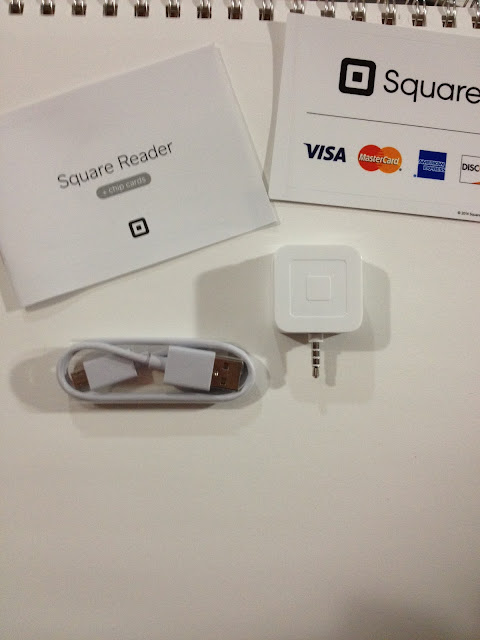 The Square package disemboweled.  The instructions, the charging cable, the stickers, and of course, the Square EMV reader. 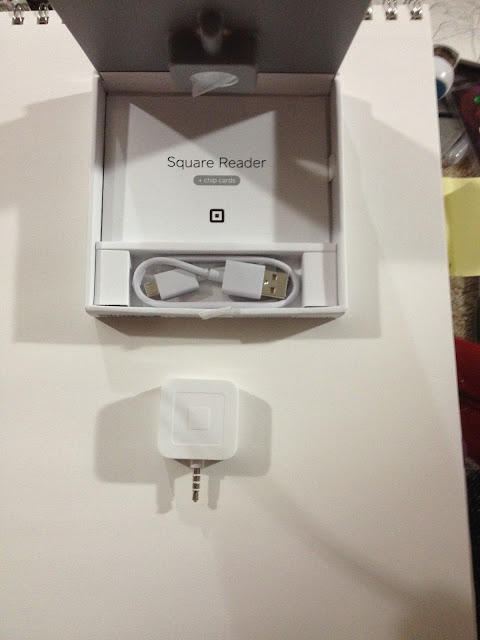 So Square's packaging is pretty Apple-esque- sleek rubberized cardboard with a formfitting insert tray.  Unfortunately, also like Apple, SquareUp doesn't include a carrying case, or utilize packaging that can be easily reused to protect their products.  Inside my package was one Square EMV reader, the instructions, a new set of stickers, and a charging cable.

As you can see, the new reader is huge compared to the original reader. 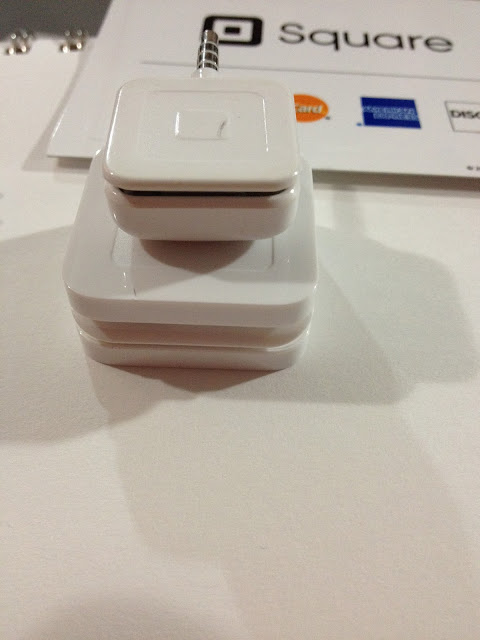 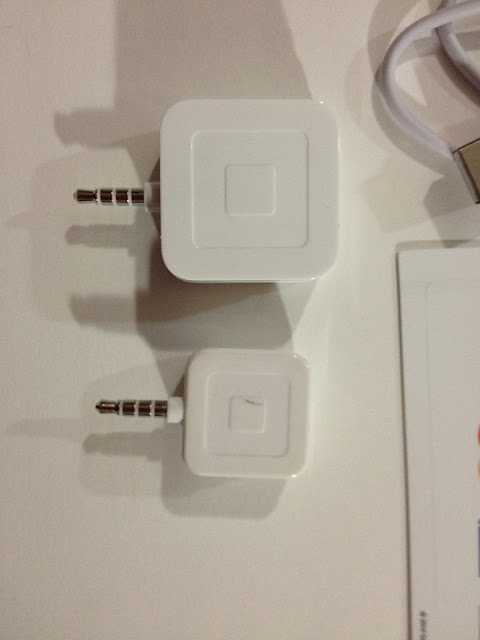 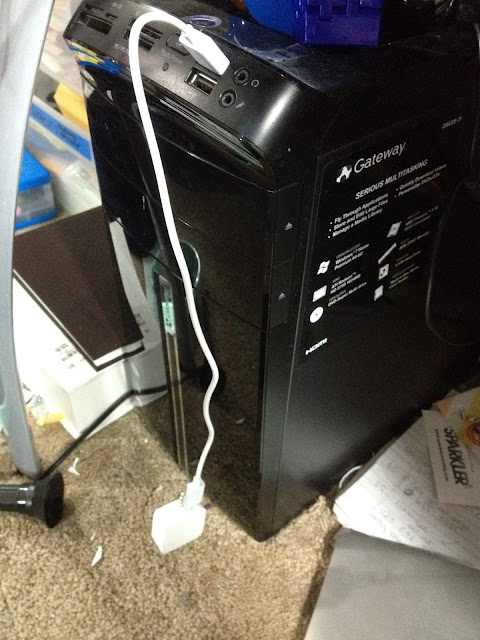 Excuse my messy apartment while I charge my Square reader with the short included cable.  No indicator lights lit up when plugged in, so I had no idea if it charged or not until I plugged it into my phone.  Even then, indicator lights didn't show, but having your indicator light on the BOTTOM of your product closest to where you plug it in is a stupid idea.  I double checked to make sure, and I guess my light is just broken, because it didn't light up, but Square Register, the iPhone app, recognized my reader as being plugged in.

For the magstrip reader on the new EMV reader, you simply swipe cards through the second slot as you would through the original readers. 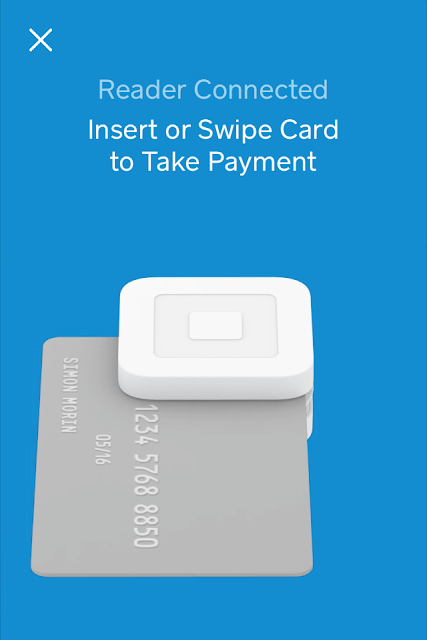 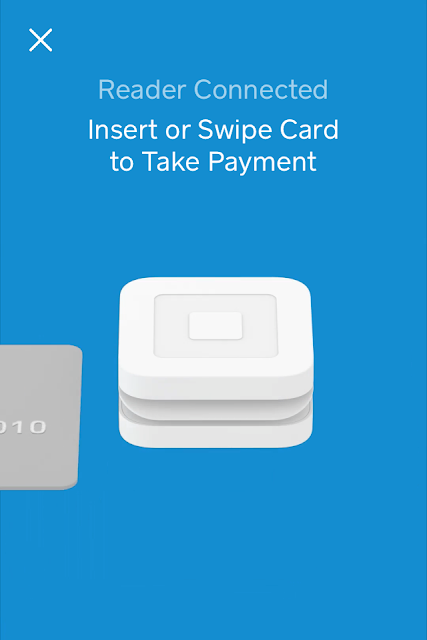 This was an animated gif that I am too lazy/busy to capture for your amusement.  Download the app and see for yourselves, but it's pretty simple and includes no additional text.
What an EMV Chip Looks Like 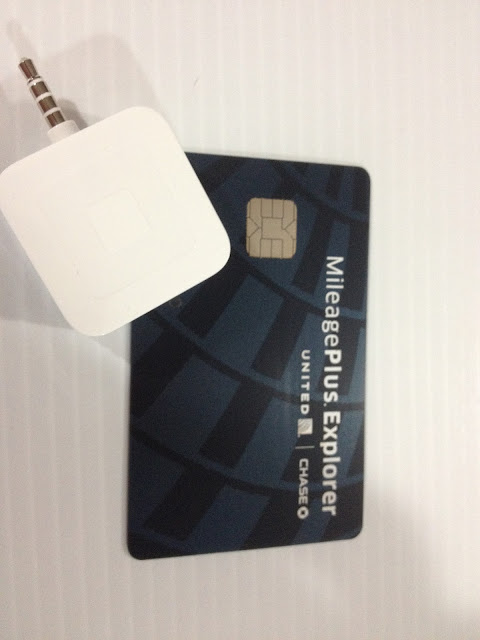 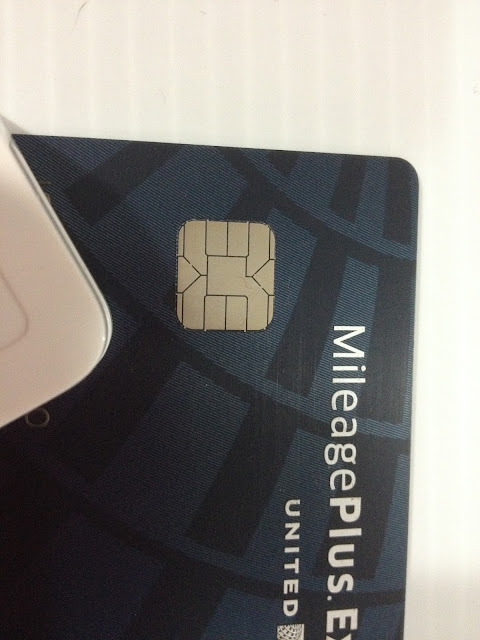 The Square EMV reader has little metal teeth that connect with this chip for the transaction, so this is what you'll line your reader up with when scanning chips.

The new reader is really bulky, it throws off the weight of my phone.  I guess part of the plan with this new reader was to keep pace with the size of newer phones, but a lot of artists have older smartphones, 4G and below.

So uh, my indicator lights flat out don't work.  It doesn't show when it's charging, charged, or dead.  My phone seems to pick it up though, so I GUESS it's working?  Why can't this device just siphon a charge off the phone the way the other reader does?  When this reader is dead, can it still do mag strip reading the way the other reader can, or will I be pulling out the old reader?   And although I KNEW the new reader was big when I was taking the first batch of photos, I didn't realize how huge and bulky it really was until I plugged it into my phone.  The least SquareUp could have done was have the jack fold into the unit, consider how huge the unit is, or offered a lanyard or keychain loop so it could be easily carried along.  Or put the charging slot on the side of the unit, so you can charge while you're using it.  Or included a carrying case for the cable and the unit.  It DID however come with a super short charging cable.

My Square reader isn't registering the 'dip' when I run the EMV reader over the chip.  I'm not sure if the reader has run out of a charge or not- I charged it when I first got it, and haven't used it since, but it's been a couple days.  There's no way to tell, as my indicator lights aren't working.  It doesn't seem to register magstrip swipes either, which is a shame because if Square discontinues the older models, we can't even fall back on those when our EMV units die.  If this thing can't even hold a charge for a few days, that doesn't bode well for convention use.  Plugging it in to charge for awhile, then I'm going to retest.  Even plugged in to a computer, my indicator lights aren't lighting up.

Ok wait, so if you really push the plug in, all the way (like it's supposed to, but it resists going in that far, and I didn't want to break it) the charge light DOES light up.  Maybe I was just an idiot and not charging it properly. 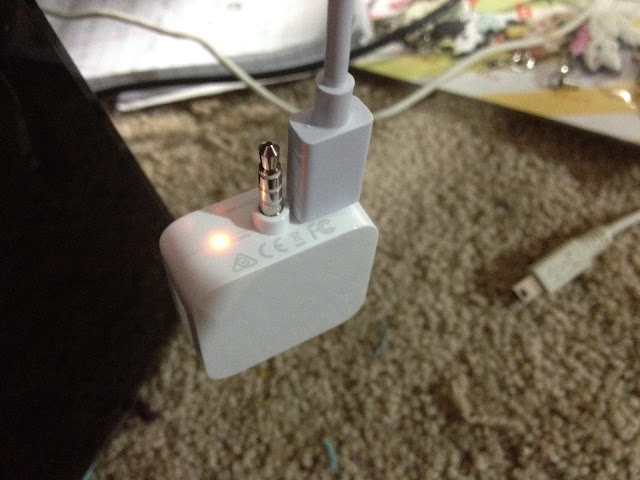 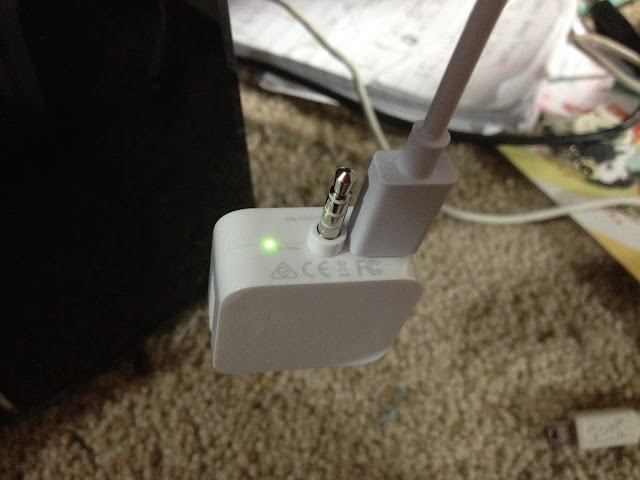 When unplugging the unit, it feels like micro USB is going to chip off and stay stuck in the EMV reader.

Ok reader is charged and plugged in, testing the EMV reader.  You have to leave the card in for a REALLY long time, and the EMV reader is all about establishing a secure connection (would that even be available at conventions?  Those of you with iPods instead of iPhones might be outta luck if you're reliant on shared wifi), and it takes awhile to even establish a secure connection.  While conducting an EMV sale, you leave the card in the reader, which will be awkward for us shorties who have to stand up to conduct credit card transactions.  Once the transaction goes through, it's business as usual, although you have to click New Sale to complete the transaction, or Square will send you a push notification.  Square lets you know when the reader is ready. 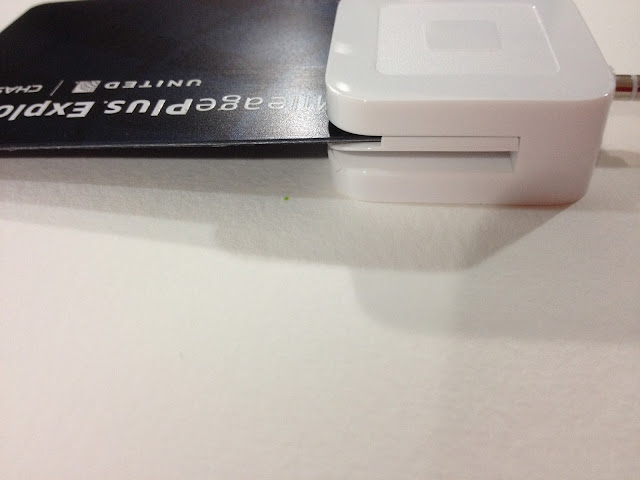 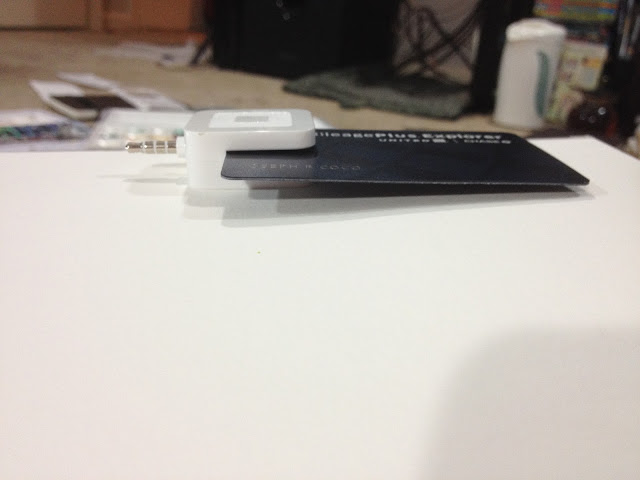 
Most of my customers don't even have EMV credit cards, they have magstrip debit cards.  I don't really do credit cards, so I have two debit cards with magstrips, I'm not even sure if debit cards COME with EMV chips (it'd be nice, as that's our actual money being accessed).  Since I plunked down $30 for this new fancy reader that can't even self charge, I wonder if  these magstrip transactions are protected as well, or just the ones I use my EMV reader for.  If this reader gives me as many issues as my other two readers have, I'll be typing in a lot of cards anyway, so having a magstrip or an EMV reading slot won't really matter.

Like all small businesses, I have to be careful about how I spend my capital.  While $30 may not seem like much to many, I was happily using Square's FREE reader for years.  If this new EMV reader doesn't perform better than my previous two readers, that $30 will be $30 wasted.  However, as Square is adamant that it's really pushing for October full adoption,  I'll carry my EMV Square reader, as well as an old faithful backup on me to conventions in the future.