As an artist who takes her materials seriously, it still manages to surprise me that people will often pursue 'cute' or trendy materials over those that are useful or effective.  In recent years, Pantone Universe has become a popular consumer brand, with products as far ranging as Christmas Ornaments  to cellphone cases.  Somewhere within this wide range of products exists Pantone Universe Twin Markers, alcohol based twin tip markers color coded by Pantone's exclusive system.  With a little research, I've found that these markers are on the wishlists of Pinteresters and come up regularly on Wanelo, but I have to wonder whether it's due to the merit of the markers themselves or due to the current trendiness of the Pantone Universe collection. 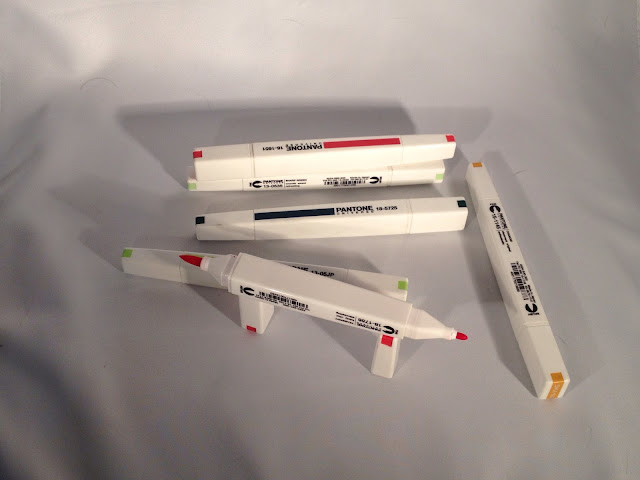 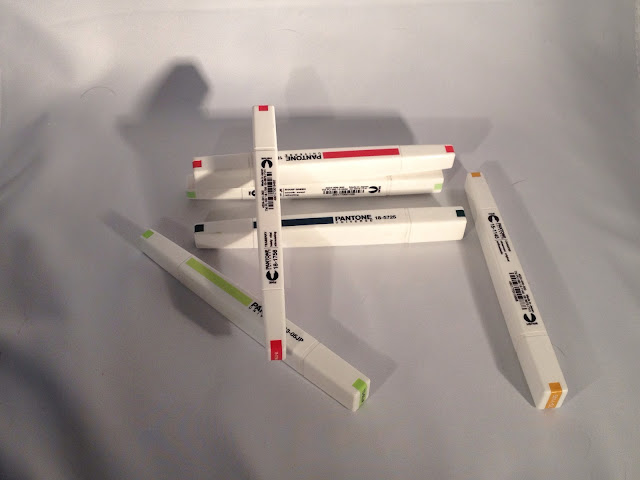 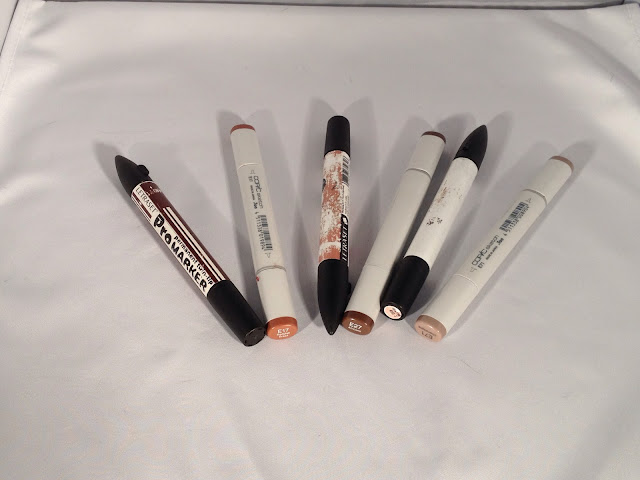 Pantone Universe Twin Markers isn't Pantone's first foray into the world of alcohol based markers.  Previously, I tested Letraset's Pantone markers, which were also coded on the Pantone Color System.  There isn't a lot of information available about Pantone Universe markers, and I'm assuming that Pantone and Letraset ended their partnership when Pantone decided to start producing their own markers.  Letraset's Pantone Tria markers and Pantone Universe markers are very different in appearance, although fundamentally they serve the same purpose- both are art/illustration markers with alcohol based ink available in a wide range of colors.  Both sets are based upon the Pantone Color Guide, which includes a numerical designation as well as a color name, and in theory, the old Letraset Tria Pantone markers should correspond with the new Pantone Universe Twin markers.


There are some very basic differences between the two Pantone marker iterations.  Letraset's Tria marker is a round, twin tipped marker with a chisel nib and a bullet nib, the Pantone Universe marker has a bullet nib and a brush nib similiar to Copic's Super Nib.  There's a lot of information available about Letraset as a company, and a lot of people have already reviewed Tria and Promarkers.  Tria and Promarkers are refillable and feature replacable nibs, I haven't found any information online as to whether or not Pantone Universer markers are refillable, but I would hazard a guess to say they are not.  Both Promarker and Tria are cheaper than most Copic options, but are still more expensive than the Pantone Universe markers.  I dare say the Pantone Universe Markers will be the least expensive professional art markers I've tested yet.

This inexpensiveness doesn't excite me.  There are plenty of cheap markers available- a stroll through the school supply section at Walmart offers a variety of options under $10.  Cheap does not equate quality when it comes to professional grade markers.  When purchasing markers intended to create quality illustrations, I want markers that provide uniform results, blend well together, and result in as minimal streaking as possible.  In my experience, cheap markers don't promise these results.  That doesn't mean I think that spending copious amounts of money on a marker collection is necessary or even advisable.  It just means that I'm skeptical when it  comes to a low price tag.  Affordablility also doesn't mean ease of access- I've only see the Pantone Universe markers available online. 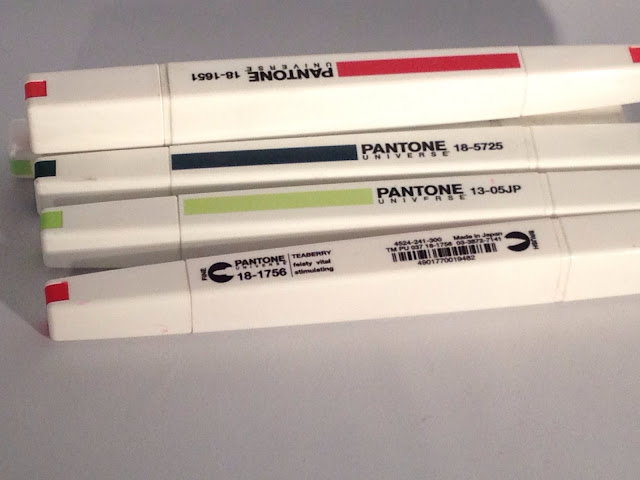 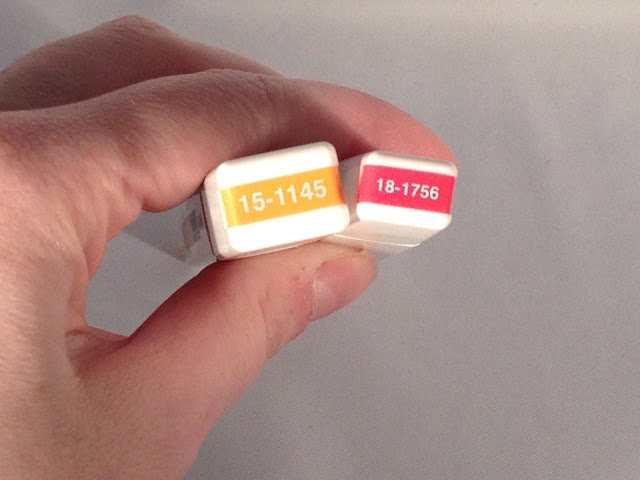 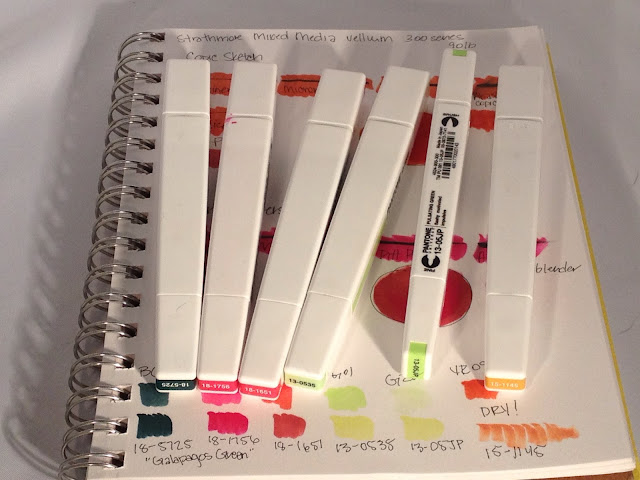 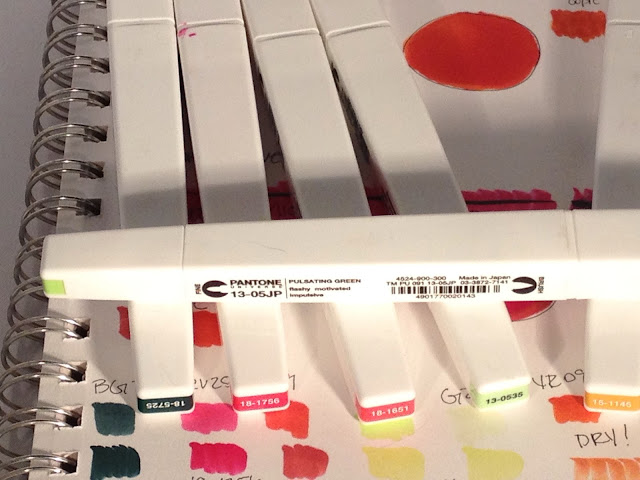 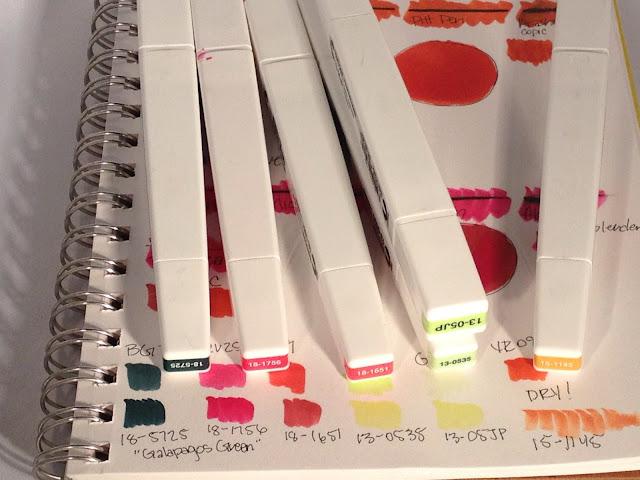 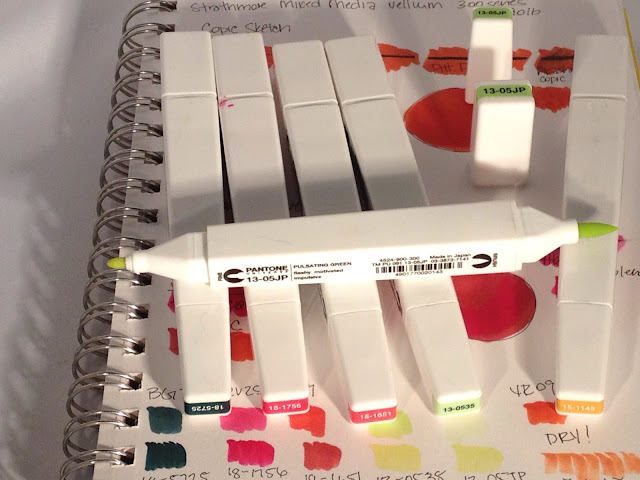 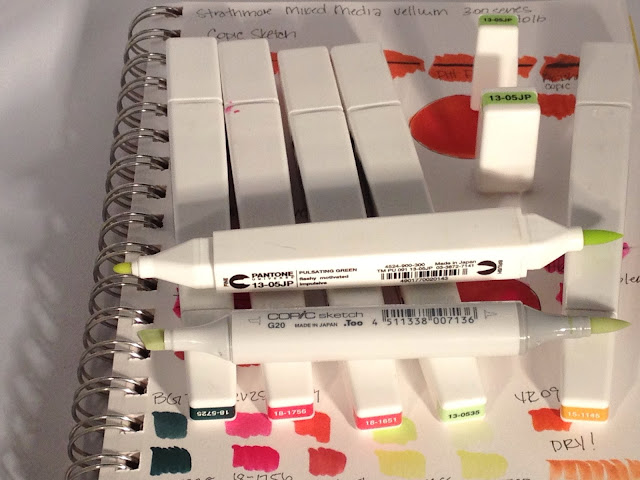 This test is my standard for all alcohol based marker comparison tests, and you've already seen it with my Spectrum Noir, Prismacolor Premiers, ShinHan Twin Touch, FlexMarkers, and Pantone Letraset Tria tests. I test the marker's compatibility with a variety of technical pens (Sakura Micron, Copic Multiliner, Pitt Pen, the waterbased ink found in Akashiya brush pens, the gel ink in Pentel Technica rollerball pens), as well as it's ability to blend and layer (shown on the sphere) and it's ability to mix with the other marker (show in the boxed area).  I also test blender compatibility with the Copic Colorless Blender. 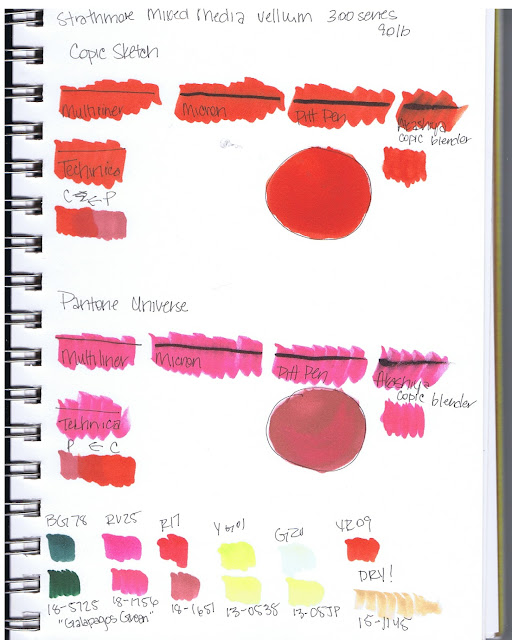 The Pantone Universe Twin Markers left me very unimpressed.  Out of the six markers I ordered,  one arrived dry.  For unused markers ordered directly from a website, this is unacceptable.  I strongly hesitate to blame DickBlick.  When purusing their reviews for the Pantone Universe Twin Markers, I found that a lot of customers receved dry markers, even from sealed sets.  To me, this means the producer of the marker is at fault.

In general I was not impressed with the Pantone Universe Twin Markers.  Not only were they all a bit dry (as compared to the juiciness of a brand new Copic), but there's little way to remedy that as they aren't refillable.  I've read of some bloggers reviving old Prismacolors with alcohol, but that shouldn't be necessary for brand new markers.  Dry markers are difficult to blend, and it's hard to lay down an even field of color with dry  markers.  Pantone's boxy markers are uncomfortable to hold, although they won't roll off your desk, and though the super brush style tip beats a dry chisel or bullet nib, it isn't enough to salvage this twin tip in my eyes.