Heroescon 2011 was the first comic convention I'd ever tabled at.  Retrospectively, it was a pretty rough con- I was horribly unprepared (as photographic evidence can attest), just coming off a fairly stressful semester, and was trying to appeal to a demographic that wasn't really interested in what I had to offer.   The artist alley and the dealer's room shared a space, with the artist alley to the back. This meant that many of the patrons never even made it that far, spending all their money on Hulk bathrobes and Thor slippers up at the front.  Despite this shaky start,  I resolved to keep at it, and have been attending conventions ever since, widening my net and trying anime cons, indie cons, and cons held in bars since then.  I decided to shake things up this year, and volunteered at SCAD SEQA's table over in the vendor section of the con floor.


My expectations and the reality were very different events.  I'd gone to Heroescon expecting to help out at a variety of SCAD  run panels, packed up a capsule convention kit of mini comic books, buttons, and charms to sell, and selected an appropriately professional, approachable, and cute wardrobe to wear, including sensible but fun shoes.   I'd hoped to make back the cost of my convention badge ($45 for a three day pass), I'd wanted talk to a few editors, and meet some new artists.  I have to admit that this particular instance of volunteering probably didn't do a whole lot ot advance my career, and that my purchasing my comic convention badge may possibly have been a waste of money this year, especially since I didn't buy as many indie comics as I would have liked.  I'm generally a pretty shy person. and rely on the crutch of having an artist alley table to give legitimacy to my craft.  I had hoped that sitting at the SCAD table, working, would've allowed me to meet a lot of new people, and given me an opportunity to promote Sequential Art and myself.
Unfortunately, the SCAD table was overbooked.   Some volunteers at the table took advantage of the kindness of others, hogging the table for the duration of the convention.  I spent a lot of time sitting on the concrete floor, drawing and hoping for an opening or wishing I'd be asked to run an errand, and eventually I took agency and decided to explore the convention, carrying my cellphone with me should I be needed.


I did learn some very valuable things from the table time I did have.  I was fortunate enough to sit next to Tom Lyle (here's a link to his Wiki article, which while short, gives you a gist), who was the reason our booth got the majority of traffic it saw.   Sitting next to him was an education in dealing with fans, handling on the spot commissions, and being polite to even the most obnoxious people.  It was interesting to see the convention side of him, especially since I had him as a professor for 501 over a year ago, and the two are totally different.  Although I think his most notable work was his run on Spider Man, a lot of fans came by asking for Robin commissions.  Sitting next to him reminded me why most people go to superhero comic conventions- not for the indie artists, but to meet the artists who drew the comics they read as kids.

Should you decide to volunteer for the SCAD table at a comic convention in the future, I hope you can apply what I've learned to your experience.


I feel like I'm in no real position to comment on the convention itself.  I attended two panels- one  led by Dan Glasl -a fellow SCAD grad student- on perspective, and the other supposedly on storytelling with Becky Cloonan as a guest.   The perspective panel was good, if basic, and the Storytelling panel devolved into the artists involved talking about things they liked, media wise.  The convention was more crowded than last year, and the vendor area was crazy packed, so it may be time for Heroescon to consider a re-allotment of space, as there was plenty of room upstairs.  There was only one entrance to the vendor area/artist alley, and it was set up to provide a photo opportunity for guests, and it got congested quickly.  In the past, I've found Heroescon a hard sell, and it continues to be so for me, although I didn't really have an opportunity to present myself as a comic artist this year.

One bright spot of the convention was visiting with my friend, Dylan Banks, a Charlotte native.  He came to Heroescon to show his portfolio around and gather some reviews of his work.  His experience with Heroescon seemed to be much more positive than mine, reminding me of the importance of networking, positivity, and gratitude.


"So last weekend, I went to Heroes Con. For those who don’t know, Heroes Con is a comic book convention held annually every June in Charlotte, NC.  As an amateur artist myself and for all of you artists out there, it’s a great resource. It’s a chance to meet real professionals in the industry and a way to get your own name out there while you’re at it. The cost of three day admission was only $30 and there are many hotels in walking distance from the convention center where the event is held. The whole event takes place in downtown Charlotte and for those staying at a hotel, there are plenty of places to go and things to see after the con as well.
When I arrived at the con, I brought a portfolio filled with prints of my recent digital work. Bringing a portfolio is something you definitely should do if you’re an artist, even if you aren’t particularly interested in going into comics. When I arrived at the actual convention itself, the enormity of it all was a little daunting if not completely overwhelming. The place is huge and packed wall to wall with artists ranging from amateurs to professionals and each one of them is trying to sell their art. I started off by going to the Artists Alley, a section where freelance artists who have bought tables are set up. I recommend starting here, there are plenty of great artists to meet and it’s a great jumping off point for showing people your own work. It is also great for networking with other artists in your own peer group and getting involved with other art communities and projects.  I traded prints and information with many of the artists I met here. I had written my name and website (www.dylanbanks.tumblr.com) on the back of my prints in lieu of having business cards printed out in time for the con and in turn received a lot of new people following my art. I also received a lot of good and helpful feedback about what kind of steps to take in my own artwork, along with meeting some great people.
Next I went out and started introducing myself to some of the professional artists that had tables. For those of you thinking about going to SCAD at any level, many of the professors from SCAD had tables at the convention and also have a lot of experience in the professional world. As an artist, I recommend that any and all of you who are planning to go to the con next year should talk to these guys, because a lot of the information I gained is invaluable. I’m not going to go on and on about what they told me to do with my own art, because the advice they gave me may not be the advice you need with your own art.  I’m also not going to pretend that it wasn’t intimidating and a little terrifying to show my own art to such well established artists, but it was well worth the stress. I got a lot of helpful tips on what I should be doing and what things I can do to improve my own artwork. In my personal experience, the feedback I received was critical but positive.  The odds of someone telling you off are slim to none, and all of the people I met and talked to were more than happy to look at my art and give me tips.
Lastly, being at the con in general was just a lot of fun. There were so many amazing artists to check out and a lot of great people to meet.  All and all it was a great experience and I plan on going to Heroes Con as long as it’s around."


Before Heroescon, I'd prepared a capsule collection of my work: 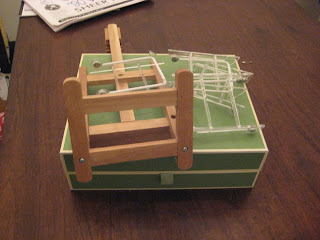 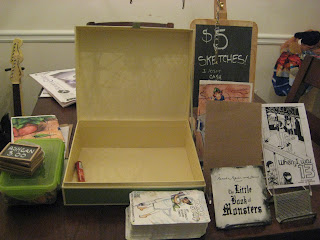 It was pretty basic and designed to fit within the space directly in front of me (we were told we'd have that, and only that, although in my experience, I got a 10"x3" strip behind the massive SCAD portfolios), although it sadly never saw the fluorescent light of Heroescon.  I chose work that I thought was interesting and fun- two mini comics (When I was 13 and Momotaro), my latest sketchbook, the Little Book of Monsters, and my buttons and charms.  It packed up fairly light, which was good, as it got hauled around a lot.

I didn't really give myself an opportunity to walk around the Artist Alley and buy comics until the last day, when I'd sadly left my cash in Heidi's car.  I had debit card, but the cellphone reception in that convention center is terrible, and most vendors couldn't get their Square Ups to work, so they weren't taking card.  I ended uup returning home with only one comic in tow, which is pretty pathetic. 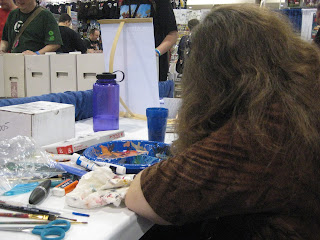 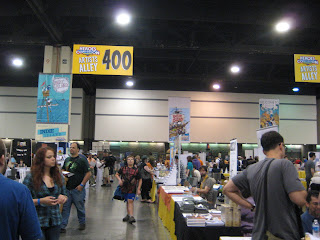 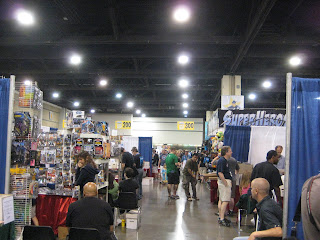 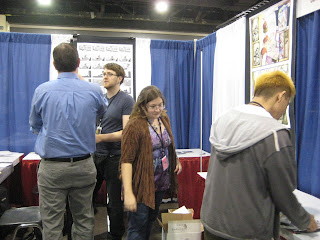