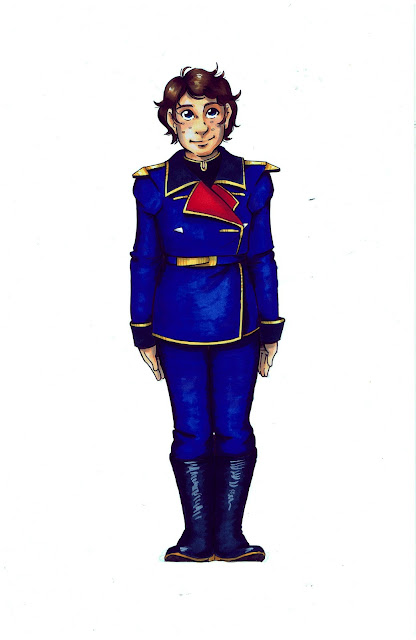 The scan is pretty awful, the original is much better blended.  I've tweaked it a bit, but I can't recreate the original.

This is the rest of my little brother's Christmas present.  He's a huge Gundam fan (with Zeonic leanings), so I brought him a bunch of Zaku stuff from Japan, and drew him as a Zeon officer to round it out.  I'd considered doing the traditional salute, but decided it was a little too "Hail Hitler" for me, and thought that having him stand at attention would be a better choice.  My younger brother's a bit on the plus size, so I waffled between drawing him 'as is' (which has the potential of coming off as offensive) and slimming him down a bit.  Fortunately, the Zeon officer's uniform forgives a lot of sins, so while he'd be the huskiest officer in the bunch, he wouldn't come off as being too fat.  When drawing commissions, there's a fine line between being too honest and being generic.  A major complaint I've received from family (brother excluded) was that I'd drawn him too thin, but Devin really liked it.  I'll probably add a bit of shading around him, so it's not so stark, and mail it off.  It's always very gratifying when you can draw something for a family member and they appreciate it.
Email Post
Labels: commission Devin Gundam male present Zaku