I wrote this post right after ALA in 2015, and opted not to share it for a variety of reasons, including a depressed spell brought on from poor ALA sales and lack of career headway.  I'm opting to share it as it is now, in hopes that it may help another self publishing children's illustrator decide f ALA really is worth the investment.

Before ALA officially started, I started a document for the show, since I'd already had some thoughts and experiences in the weeks preceding.  Unfortunately, my organizational system for this blog is horrific, and I lost my thoughts.  I'll try to recapture them for you guys, as I feel like they're important when deciding whether or not ALA is the right show for you.

ALA's submission process includes submitting a piece of art for review that, upon acceptance, ALA will auction in their original art auction.  These pieces are bid upon by ALA attendees (primarily librarians and educators), and the submitting artist has the option of working in two sizes- 8"x10" or 11"x17".

ALA didn't provide any standards for submission- so I opted to paint a watercolor for my submission, as that's what I'm known for.  The submission page suggested those applying for a table create a piece that involved libraries, literacy, or reading, so after some brainstorming, I opted to illustrate Kara and Tanner playing in a fairy tale pop up book. 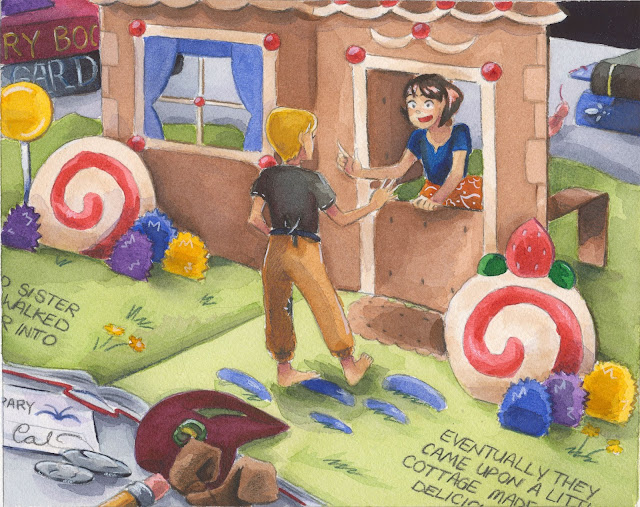 To apply to ALA as an artist in their artist alley, you must fill out a form linked on the site and submit a scan of the piece of art you intend to donate for their art auction.  This means you need to start your piece when you've started THINKING about applying to ALA, not right at the moment you're submitting your form. 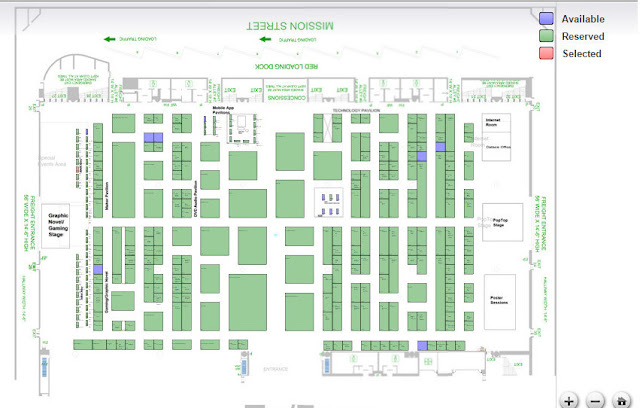 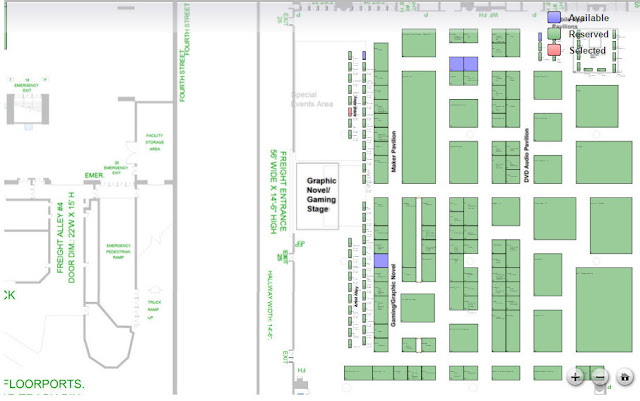 Do it Yourself Advertising

Offering a Giveaway on Goodreads

Ordering 7" Kara and Gizmo Grandma: A Twisty Tale Postcards to hand out at ALA 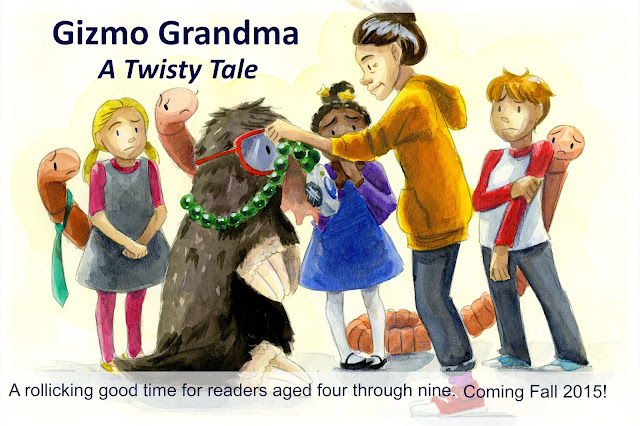 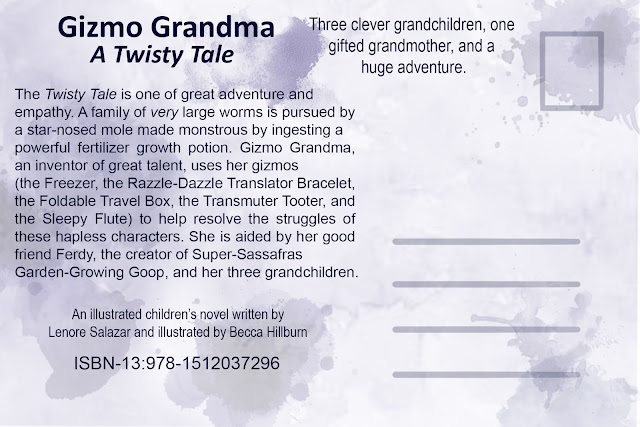 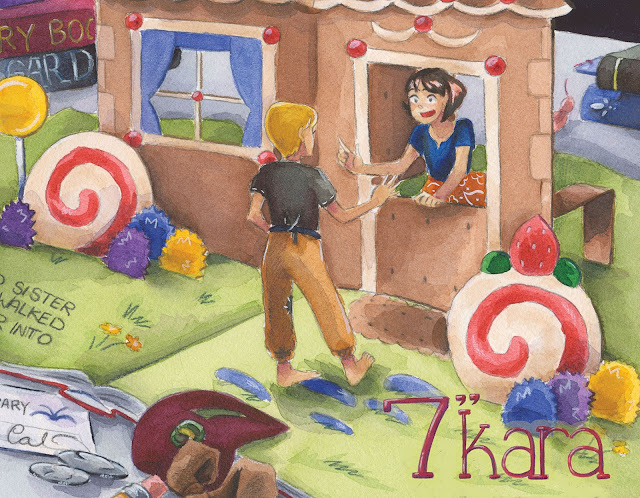 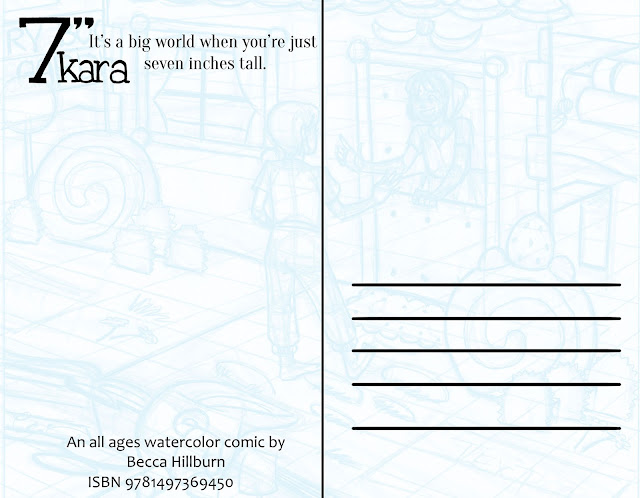 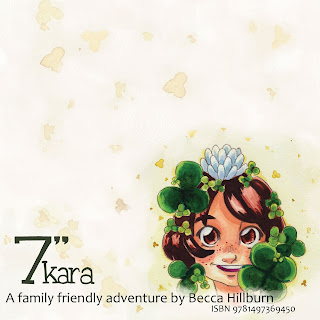 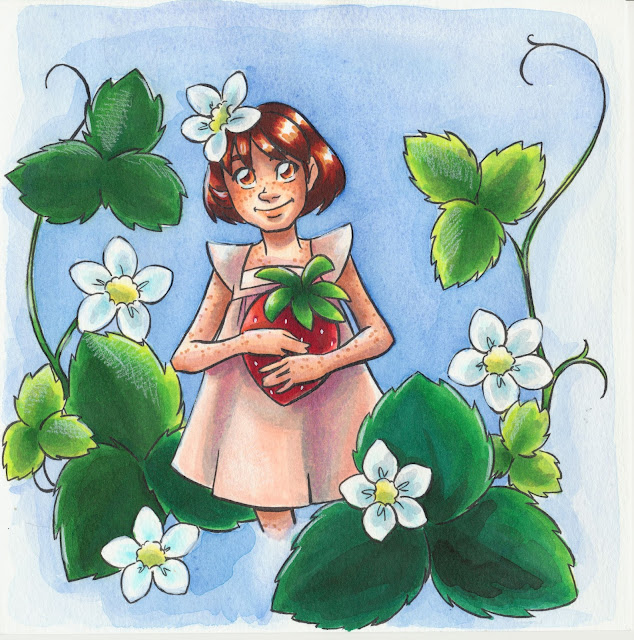 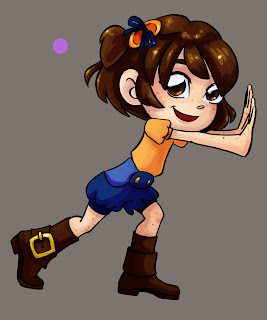 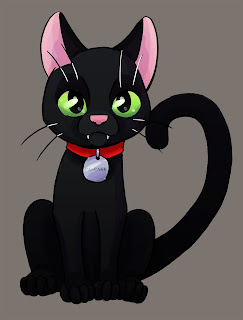 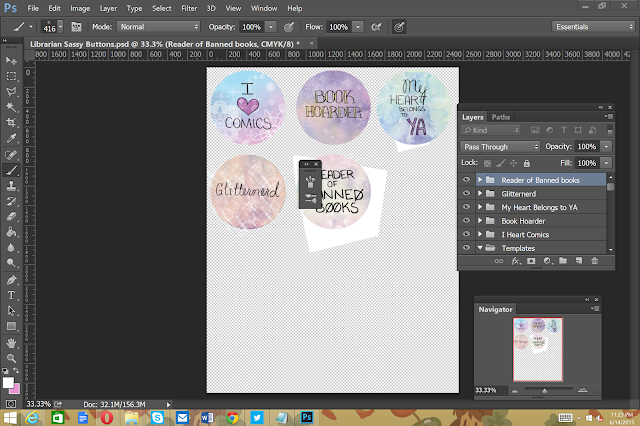 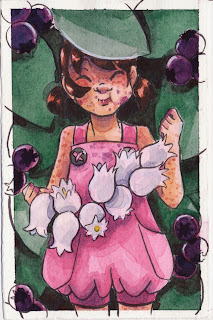 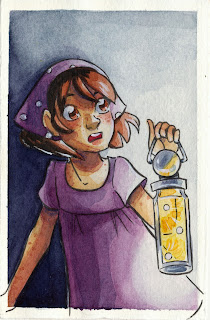 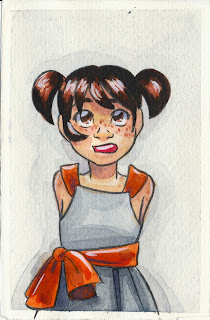 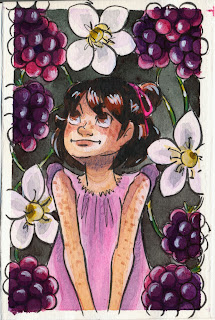 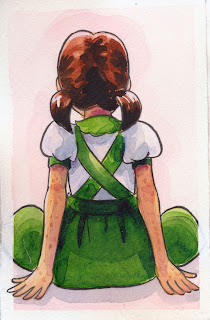 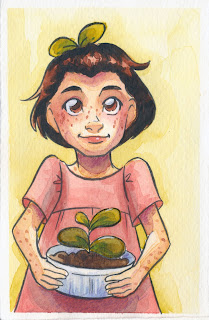 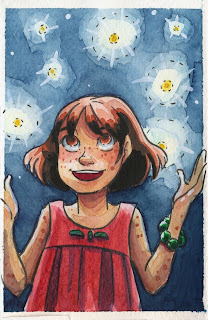 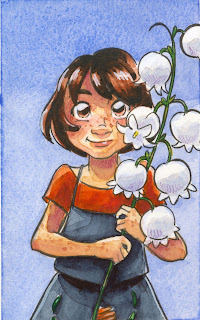 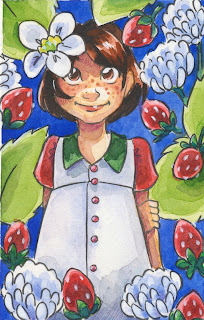 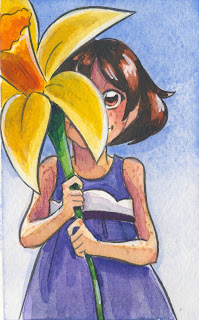 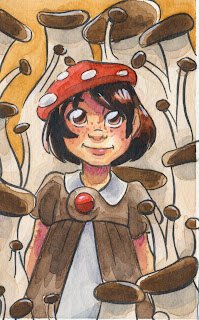 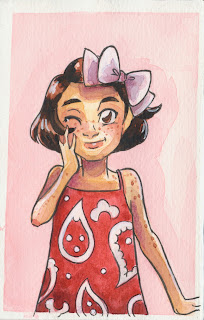 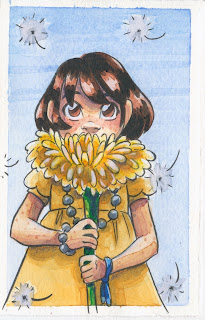 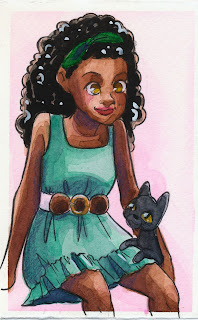 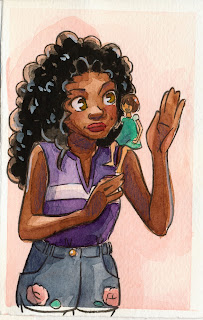 Selecting and packaging originals for sale, which is something I wouldn't necessarily do for an anime con

Feeling very frustrated because none of this seems to make any headway, and I have no idea how to bridge the gap other than physically.

Constantly having to repack, weigh every single thing, break down and bring two bags, pare everything down to the bare minimum and hope it's enough

Flying to San Francisco, the Disaster

Missing our flight due to United's inability to handle a line or process customers efficiently, TSA's feeling super chatty and friendly despite me letting them know I'm going to miss my flight, a United agent just not caring that three passengers are standing right in front of him as he goes through the door closing procedure for our flight, passing us off to another agent without making sure there's actual seats on that flight, the amazing agent who actually made sure we got to San Francisco TOGETHER.

Flying to San Fran, unable to sleep on the plane due to nerves and being freezing

Landing in San Fran, navigating their hot mess of a beautiful airport in a rush

Taking the BART to our Powell stop

Hauling 200lbs of books and setup to the Moscone Setup

Getting checked in- Fairly simple, I watched our bags (I was a hot mess on the verge of tired tears) while Joseph got our badges and turned in my painting

There was a fair amount of interest, especially from kids' librarians, but most sales made were personal- for a kid, for a niece, ect.  The one super adorable mom who was facetiming with her daughter, showing her the stuff on the table so she could pick what she wanted- SUPER CUTE idea.

Met up with Heidi, got to go to Dick Blick (I promise, she bought NOTHING, Jetpens, but I bought watercolors), went over to Japantown, hit up Daiso for con supplies I hadn't accounted for, Maido because I have an addiction, and Kinokuniya for books, ate super delicious sushi.

Sales still super slow, hoping Monday will go better.  Talked to a LOT of kids librarians and educators about doing skype workshops with their kids, took down a lot of names.

Ate dinner with Emily Martin, Jeremy Whitley, Ted Naifeh at the best Chinese place I've ever eaten at (although Mother's Dumplings in Toronto was close), had coffee, and hung out at this super cute venue and had a fantastic evening.

Sales still really slow, towards the end I went and checked out the Artist Alley, chatted and bought from a lot of other artists.  Much of the anxiety I feel talking to other artists didn't exist at ALA, everyone was incredibly friendly and kind, very open about answering questions.

Donated a bunch of books due to super slow sales, rather than offering them for free to librarians, which was the other solution for creators who didn't want to haul a ton of books back.

After the show closed, packed up, dropped luggage off at hotel, grabbed a quick bite to eat as we hadn't eaten all day.  Met up with Joel at this really neat marketplace by the ferry, hung out and talked about comics like a big nerd.

Total Costs:
Plane Tickets: $650 from Nashville to San Francisco
Hotel: $1000 for four days in the heart of SF
Table:  Cost of one donated 8"x10" watercolor piece that I enjoyed doing
Food: $200 approx

I have an ISBN and a Baker and Taylor listing, which is the service libraries and schools buy their books through, and while people seemed REALLY interested in my comic, they said they couldn't buy it at the show, and would have to get permission from acquisitions.  I told myself I'd give it a couple weeks and see if any sales go through.  I don't get to handle the sames myself- CreateSpace sends out the books, and I had to increase my price to even see a pittance of royalties.

Looked into CreateSpace and my Baker and Taylor royalty rates, realized they were absolutely nil, making zero profit books sold to libraries, unfortunately had to up my prices a bit just so I could see $.50 per book.  It's unfortunate that computerized library systems and book lists are preventing creators from selling to librarians, as these systems tend to homogenize offerings, giving librarians limited access to the huge array of amazing comics available that don't enter the system.  So many librarians support Banned Books Week, where they're just promoting books made trendy by the fact that they were once banned, and are now in print, perhaps they should consider supporting Indie Comics Month, and encourage their patrons to read books they'd otherwise never be able to get their hands on due to the current publishing model?  I realize that by donating books, I can make sure they enter libraries, but unfortunately, I've donated two copies to the St Charles Parish Library system back in December, and they're STILL not in the system, so why should I just give away books I'm paying for out of pocket to libraries that won't make an effort to shelve these books?  Libraries should consider supporting creators as much as they support readers and consumers.

According to artists in the know, ALA has drastically changed this year from prior years.  In years past, many creators sold out of all the books they brought, but this year, many creators resorted to offering copies to librarians free of charge, just to make sure their books were getting into libraries.  Part of this is due to the way libraries acquire books, but part of this may also be encouraged by our placement (we were hidden amongst all the technology systems, not the first place a librarian would check out, IMO), part of this was due to the fact that literally everyone else at the show was giving stuff away for free, and I was asked numerous times during the show if people could just take my little witch coin purses and even full size copies of Kara.  People were not making a distinction between large companies that can afford to give away expensive product for promotion and individual creators who pay out of pocket dearly for every item on the table top.  This may be a distinction ALA considers impressing upon their attendees in future years.

I may consider attending ALA again when it's in New Orleans, and Volume 2 of 7" Kara is published, as well as Gizmo Grandma: A Twisty Tale.  In the future, I will bring far fewer books, as there's no point in hauling a bunch of books to and from if the majority of sales will be digital after the show is over.   As of today (July 5, 2015) I have still seen no Baker and Taylor booksales on my CreateSpace dashboard, despite how many librarians seemed extremely interested in 7" Kara, and how many declared that this was exactly what their children's section needed.   In the upcoming week, I'm going to contact the librarians who were interested in having me Skype with their kids, and hopefully doing a few of those will help build rapport that I desperately need to bridge this gap.

It's really difficult to convince publishers to give styles like mine a chance when people express interest but there's no sales data to back up the interest.
Email Post
Labels: ALA 2015 convention convention recap Self Publishing small press