Thanks to the generosity of my Patrons, I was able to afford to commission my extremely talented comic friend Amy Stoddard (@Tsukiyono), creator of the webcomic Fine Sometimes Rain, for a comic process post based on popular Patron request for more comic content.  If you'd like to help fund more posts like this, please consider joining the Nattosoup Community by becoming a Patreon backer.

If you are a comic artist or illustrator, and you're interested in creating guest content for me, please shoot me an email and let me know what you have in mind.  My guest post rate is $30 flat, paid through PayPal upon completion. 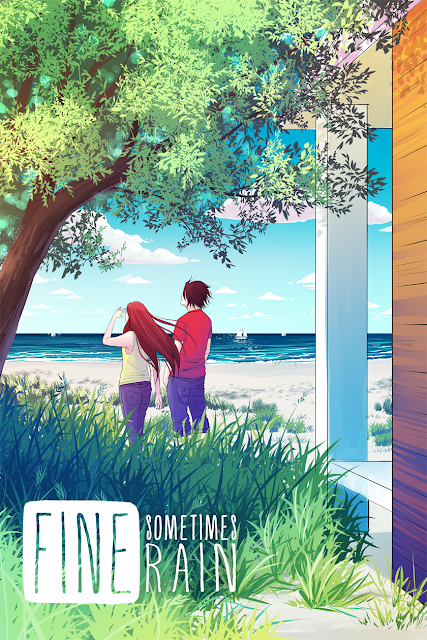 Well, now with introductions out of the way, let’s get started!  So first and foremost before I begin any comic project I always start with a script and a general outline of the story from beginning to end.  Before I started Fine Sometimes Rain I had the entire story outlined and had the first 6 chapters entirely scripted.  It makes it really easy to get a lot of the scripting done in the beginning because then you can just focus on the art for a while and being consistent with regular updates.

After the script is ready I move onto the thumbnail phase.  I like to work in “batches” so to speak, so on one day I will do all of my thumbnailing, the next day the penciling and so on.  I like to do things this way because I find it easier to stay in the zone and achieve flow if I’m working on all the same type of thing in one go. 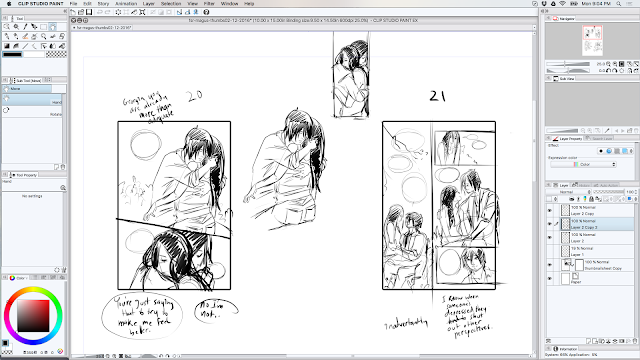 The above image is an example of two thumbnails I did for Fine Sometimes Rain, so let’s get into dissecting it!  So first things first, the template you see is something I made for myself and each of those thumbnail squares is a perfectly scaled down version of my whole comic page.  The thumbnails are roughly 3 x 2 inches big at 600dpi because I’m a jerk, kidding, it’s more because I’m fussy and other reasons I will discuss later.

So overall these thumbnails this time around are really tight.  I have a tendency to create tight thumbnails, but not all the time.  You will see many other artists who may just have stick figures and panels planned out and this is ok!  When it comes to thumbnailing you need to do what works best for you and won’t leave you working too long on them.  I also want to say that I don’t draw a perfect layout every time.  What you are seeing is my final result.  Because I work digitally I prefer to just erase a bad thumbnail and start over in my template box.  The drawings you see outside of the template boxes are thumbnail bits I liked in a potential page layout that wasn’t going anywhere and I saved them just in case I still wanted to use them.  As you can see in the example on the left, I did re-use the hug image, I just changed the panel layout from vertical to horizontal for that page.  After the thumbnail phase I move onto the pencils. 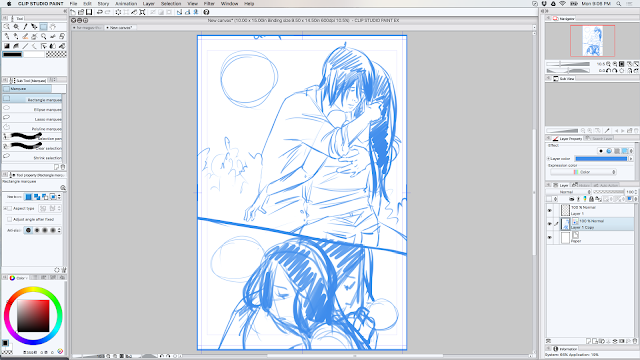 How I begin here is I copy and paste my thumbnail into the full size comic template, then blow it up and blue line it to be a base for the pencils (10 x 15 @600dpi for my fellow technical nerds).  Why do I work so large you may ask, or not ask.  Well, because when you reduce 10x15 to the standard American comic format of 7 x 10.5 it makes everything a little finer.  Did you have a line with a little jitter?  Chances are it’s gonna be no more after you reduce it for print and/or web view.  This is also the reason I do my thumbnails at 600dpi because then they won’t look quite as jacked up after I expand them.  So after this I reduce the opacity of the thumbnail sketch layer and begin penciling on a new layer using the blue pencil. 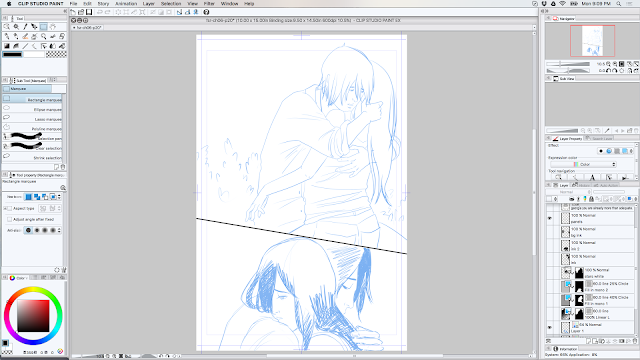 So here’s my completed pencil with the thumbnail layer hidden.  Because my thumbnails were so tight it’s hard to notice much of a change between the two at least as far at the top panel is concerned.  The bottom panel though saw more refining.  I would also like to say that I pencil really rough.  Since I’m a one woman show and I do everything I don’t feel the need to refine the pencil all that much since I know what I want to do in the inks.  I also very very rarely ever draw detailed backgrounds in pencil since I almost always straight up ink them using the rough shape outlines as a guide as this saves a ton of time. 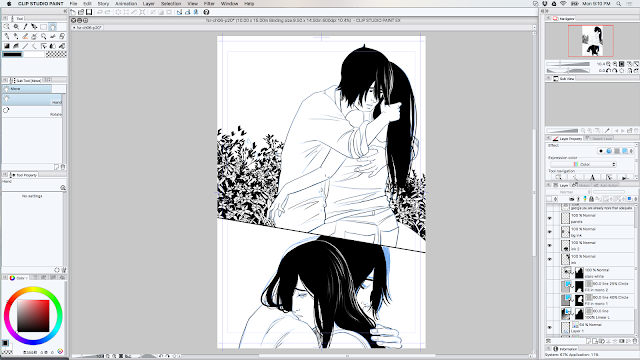 Here is the completed ink with the blue line pencil still under it.  As you can see I still do more refining with the inks.  Small details are more evident now, and in the lower panel I made adjustments to Jun’s face which had become a little too long in the pencil sketch.  Georgia’s head shape also got a tweak, and so on.  Some people prefer to just straight up ink perfect pencils without variation and that’s fine too, you should do what you feel most comfortable doing and for me that’s just refining at each step of the process.  Before we move onto the tone portion I would like to mention that the weeds and plants they are sitting in are a combination of different foliage tools, which I will share all of my tool “stats” with you at the end. 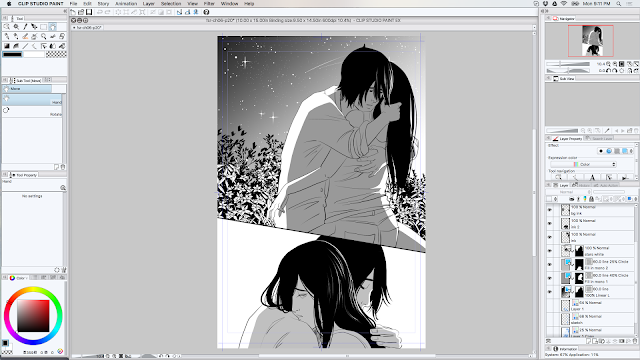 For toning comic pages I like to keep it simple.  One of the core reasons for using screentones is to save time.  If you get too anal retentive and try to tone everything you aren’t saving time and your piece will start to lose impact or worse become confusing.  This goes doubly so if you are using too many patterns.  So, in the top panel I’ve added a dot tone gradient for the night sky.  The stars are on a separate later and are just done in white ink.  I’ve found that doing it this way, as in keeping the tone and stars separate, is best because it can moire during resizing otherwise.  In this way you are guaranteed no moire.  If you already read my webcomic you probably know I’m a bit of a backlighting addict because it can really add impact if used well, not to mention time saving!  Here I’ve used a darker tone for the backlight shadow, 25% or 30% I think.  You may not think that is all that dark in the long run, but I normally backlight daytime shots around 10%-15%, and also when backlighting you don’t want the dot tone to obscure too much of the details of the figure or face, so it’s best not to go too crazy dark with it.  Anyway, going with a hard contrast in night scene in my opinion kind of punches up the idea that it’s night.  It also adds drama and this page is big time drama llamas. 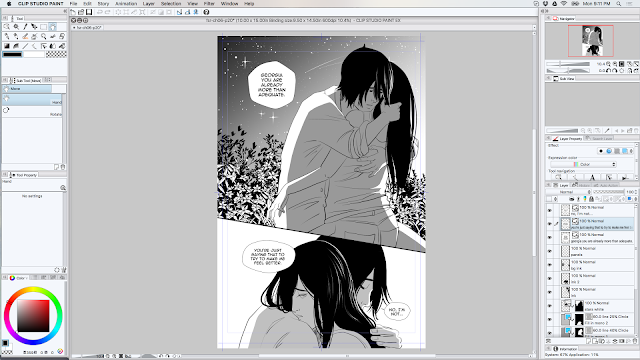 After I’m satisfied with the tones I move onto the lettering phase.  I normally do both toning and lettering on the same day since I don’t find that it requires me to shift gears that much.  My favorite dialogue balloons to use are these irregular kind of manga-esque flavored ones.  In Clip Studio Paint they are just called Default 01, 02 and so on.  I find that for my style of line art that the irregular shapes with their more organic feel work well and are not too rigid.  When you are creating your own comics you should choose dialogue balloons that you feel go together well with your line art.  It’s also ok to vary your word balloon usage as well, just be sure it’s logical.  For example I occasionally use different balloons for when someone is mumbling or shouting or whispering.


Lettering is probably the one skill artists will ignore for the longest time.  I know I did and looking back on my old comics it’s kind of embarrassing to see how bad my lettering was.  There are a lot of rules when it come to lettering, some of which you can probably ignore, some of which you cannot, like ever.  Font choice is your first area you can goof in.  You want to choose a good comic dialogue font.  For Fine Sometimes Rain I use Anime Ace which is a free font from Blambot.com.  Blambot has a ton of absolutely excellent fonts for lettering, use them, and when you can pay for them, they will not do you wrong.  The next rule that must not be broken is to have a uniform amount of space between your dialogue and the edge of the balloon.  It can be tricksy with these irregular shaped balloons and for the most part I just eyeball it and fiddle until I get something that looks pleasing to me.  I am not going to go deeply into depth about lettering here because there are plenty of resources done by people with more lettering finesse than I, but I will say another important rule is don’t have dangling words, your dialogue should look compact, not sprawled every which way.  It also need to look good within the panel.


So this is pretty much it in regards to my process.  After I finish a page I usually save a resized version for web view while preserving my originals.  When I go to print, the pages are resized down to 7.5 x 10, but keeping the same dpi unless the printer I have chosen wants 300dpi. 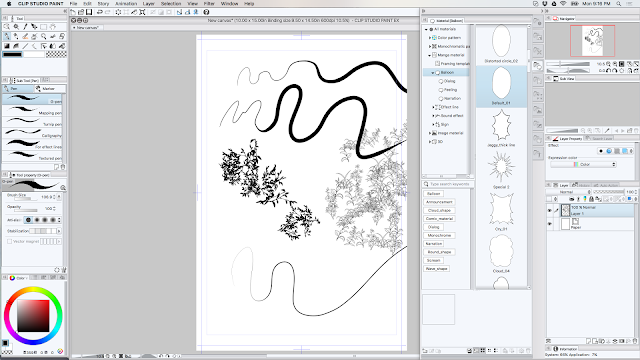 These are some of the tools I used on this page.  I primarily use the Mapping/Maru pen for inking, it’s the squiggly line at the bottom.  The G-pen is the squiggly line at the top.  I normally leave the G-pen at a large diameter and use it for more heavy inking.  The foliage tools I used on the page is the basic foliage and Grass C….The basic foliage brush was used in black and the Grass brush was layered on top to give a bit of depth.  Oh and I use the calligraphy brush to create a few extra leaves here and there.  If you would like to know more about using the foliage tools effectively, I have begin a short video tutorial series on how to use them which you can find on my YouTube page.


My fonts came from Blambot, which I recommend you check out for great handlettered digital fonts , specifically a font called Anime Ace.

So this is the end my friends of this humble process blog, now it’s your turn to go off and make some good art!