Besides being a comic artist, I am also a comic fan.  Although my main priority in attending comic conventions is to sell and promote my work, I also buy a lot of comics and talk to a lot of artists.  Much of my reading is either comics or comic related.

With that said, I don't like comic shops.  I really don't.  There's been one, in my entire life, that I liked- Planet Fun, and it was more of a nostalgia shop than a comic shop.  In my experience, from New Orleans to Savannah, from Savannah to Houston, from Houston to Nashville, comic shops have little interest in supporting local artists, in catering to women, or in branching out when it comes to clientele.  In my experience, narrow as it may be, comic book shops are still boys clubs, where if I'm not outright ignored, I'm still casually talked down to.  Even shops like Great Escape in Nashville, shops that also sell records, games, and movies, employ clerks that feel the need to rudely comment on my purchases.

Therefore, shameful admission that it is, I've never been one for Free Comic Book Day.  I first became aware of FCBD while living in Savannah, attending SCAD.  Most of the participating comic shops in Savannah participated in that they offered SOME (a scant handful MAYBE) free comics, but I had no idea prior to this year that many shops also offer local artists free table space to promote themselves and sell their comics.   By the time I found out that this is common practice, AND that a shop local to Nashville was participating, it was too late for me to secure table space.

This year, I had a reason to be excited for Free Comic Book Day, and a reason to brave a traditional comic book shop to check it out.  Way back in February, I was informed that the spread I did for the Bravest Warriors Seek and Find book was going to be included in Perfect Square's free comic book day booklet. How amazingly cool is that?  Pretty darn cool, I'll say. 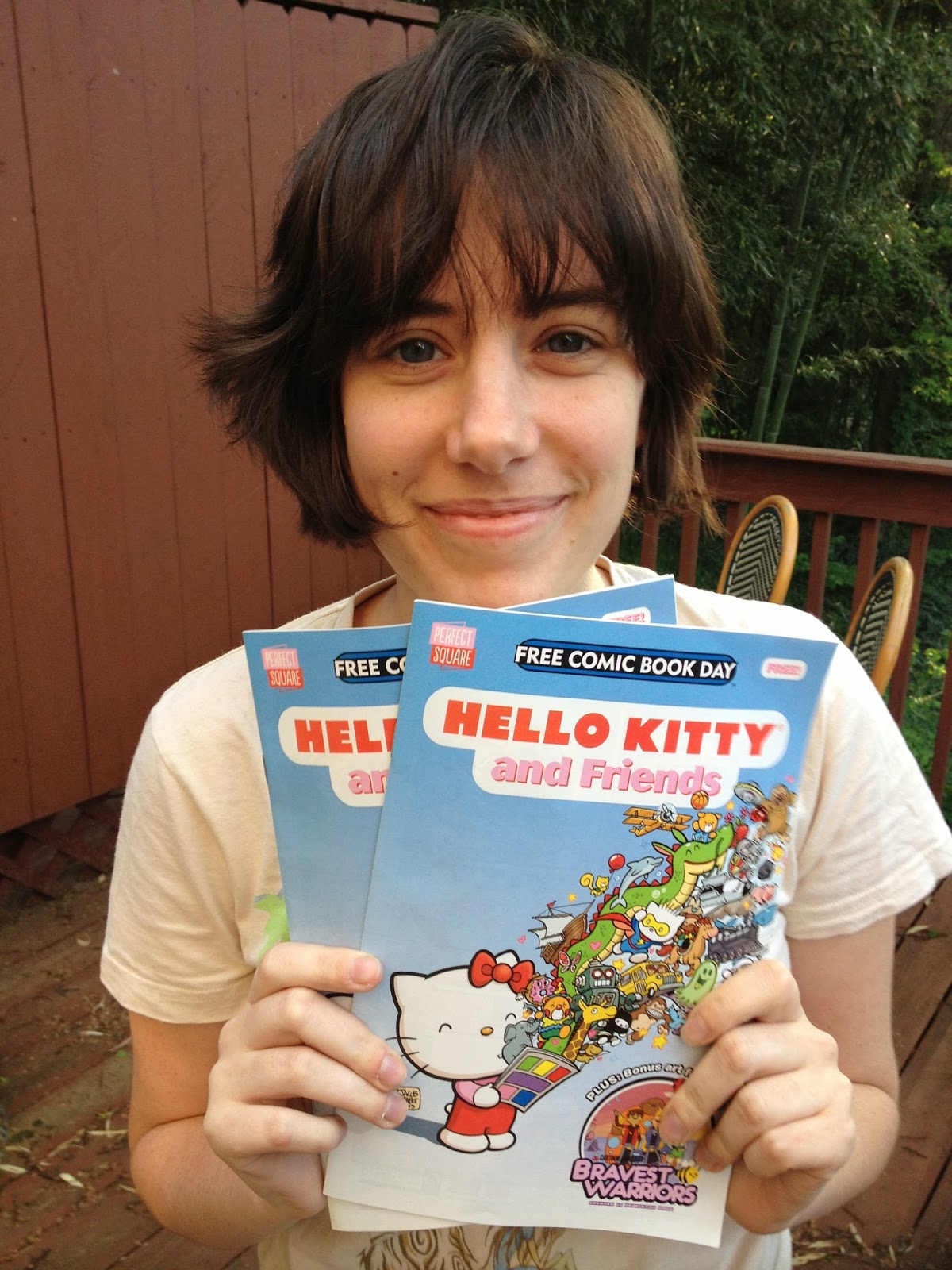 Sorry for the dorky face, I'm just really happy.  I was sent some advanced copies of the Perfect Square Free Comic Book Day sampler, which was a pretty big feather in my little cap. 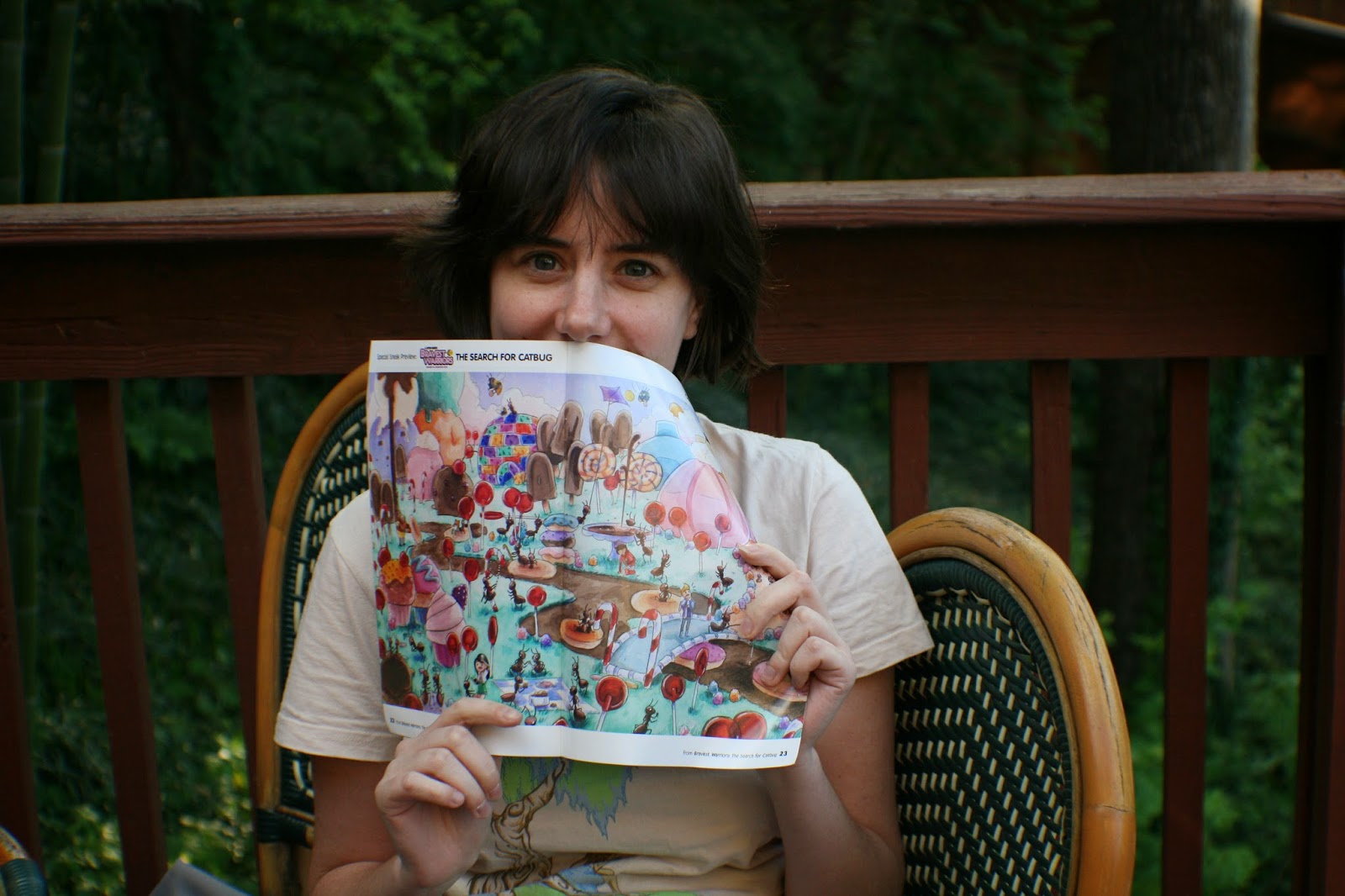 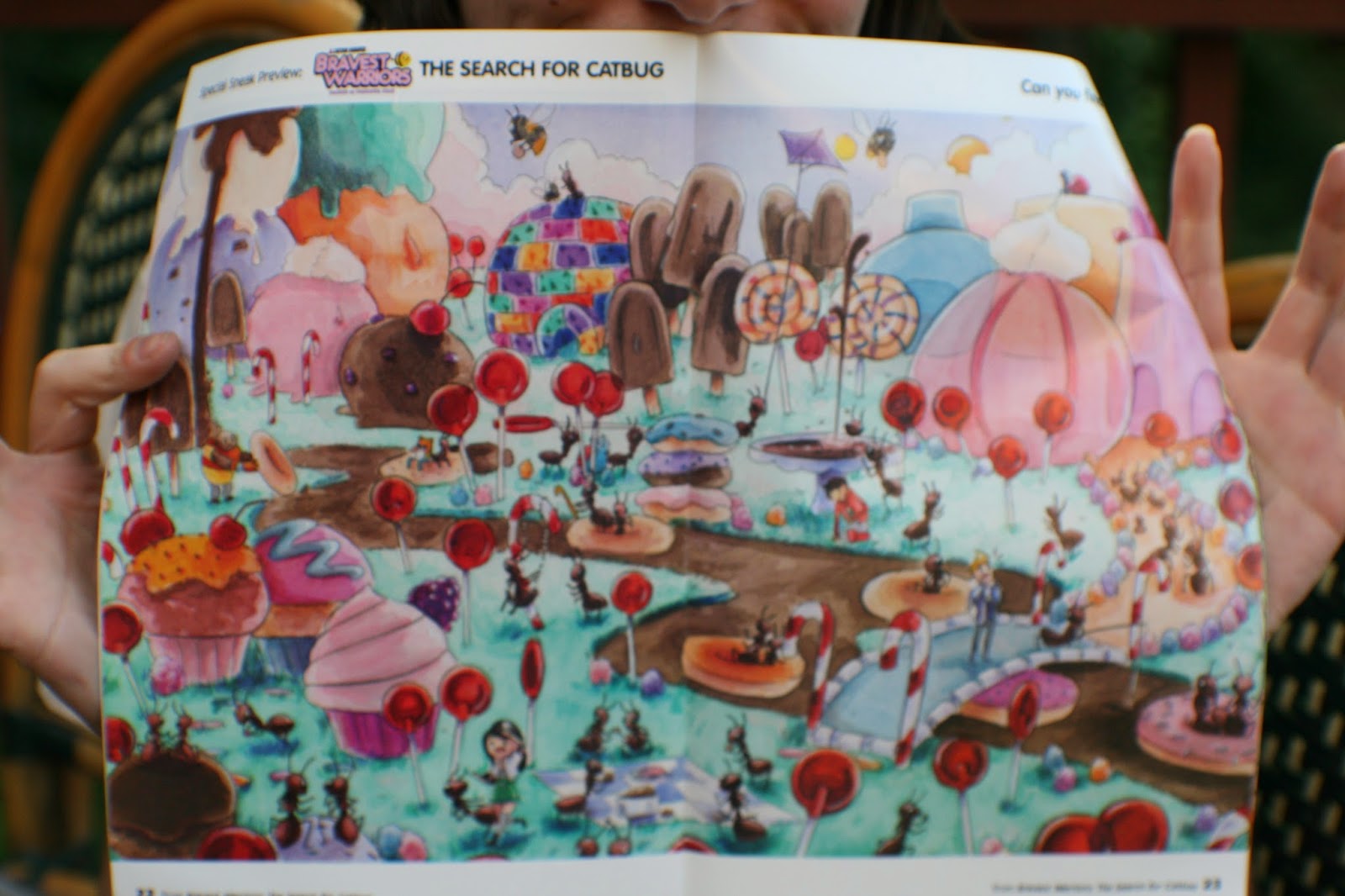 Sorry for the blurry!  It's the spread I did for the Bravest Warriors: The Search for Catbug seek and find book I announced a few months ago~!  Guess which kid liked that boring board game Candy Land a whole lot?  This gal, right here.  This is the first time I've actually be able to share this image, and I can't wait to see the book itself.  So, so, so excited at the opportunity to do watercolors for Perfect Square.

So even though I was pumped that something of mine would be hitting comic stores across the country for Free Comic Book Day, my plans for FCBD only included popping into a shop for a brief moment to see the book in its natural habitat.  It wasn't until the very last minute that I found out that Rick's (link) was fully participating in FCBD, including offering artists table space.  I shot him an email of inquiry, and was informed that though he thought they'd be fully booked, I was welcome to come by and try my luck.

I had some misgivings about tabling at Free Comic Book Day, mostly because I'd be leaving the next weekend for River City Comic Expo, and felt tapped out.  I didn't want to go through all the effort of a convention style wake up or set up, and decided that if I was going to participate in FCBD, I'd take it easy, rather than risk burn out.

Although the doors opened at 10:00 for setup, I felt lazy that Saturday and didn't roll in until around 1:00.  When I arrived, I noticed that Rick's seemed to be divided into two spaces.  Next to Rick's Comics was an empty store in the strip mall, and this is where the artists' tables were located.  Outside this shop were two large tables filled with Free Comic Book Day comics. 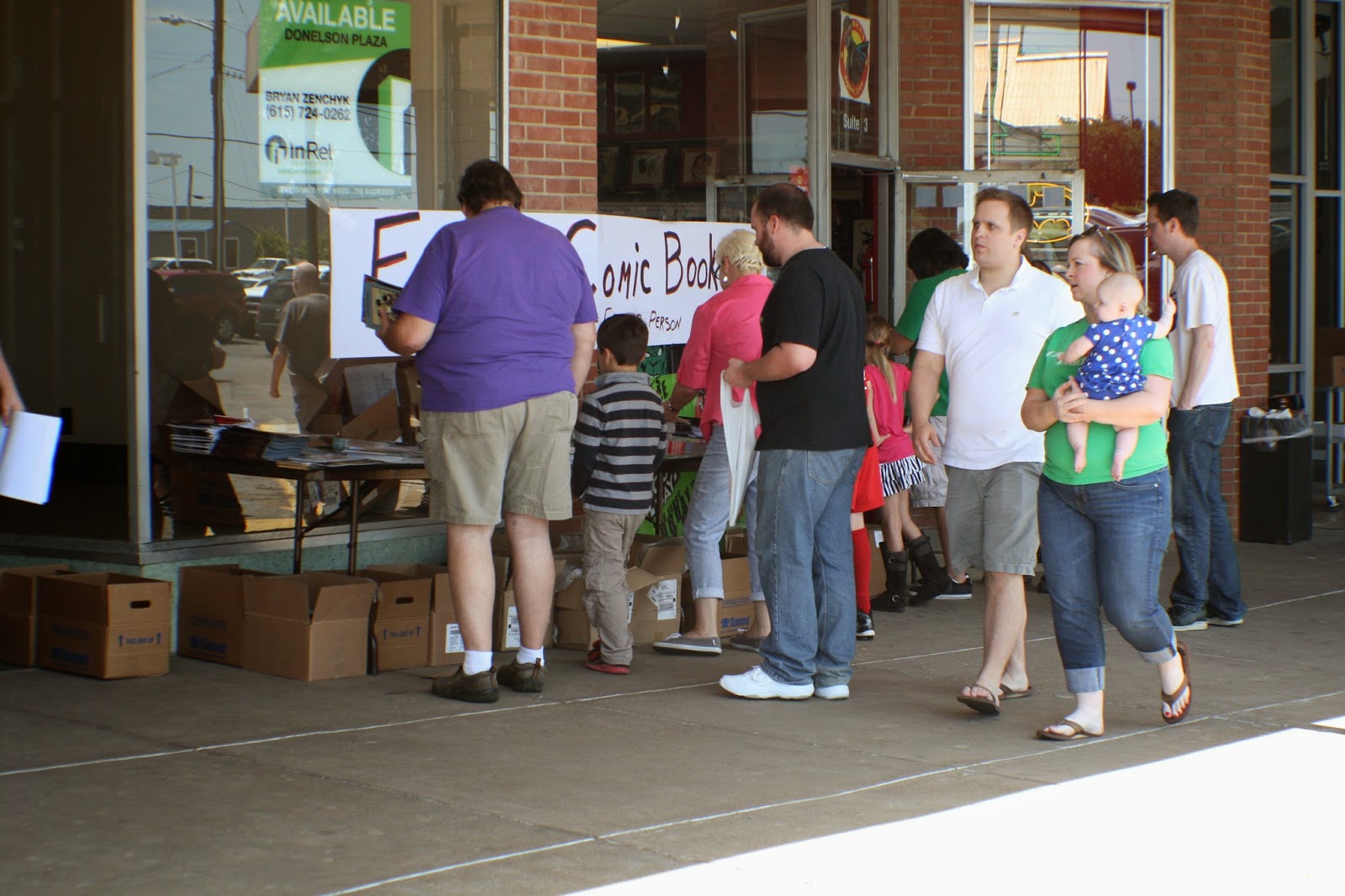 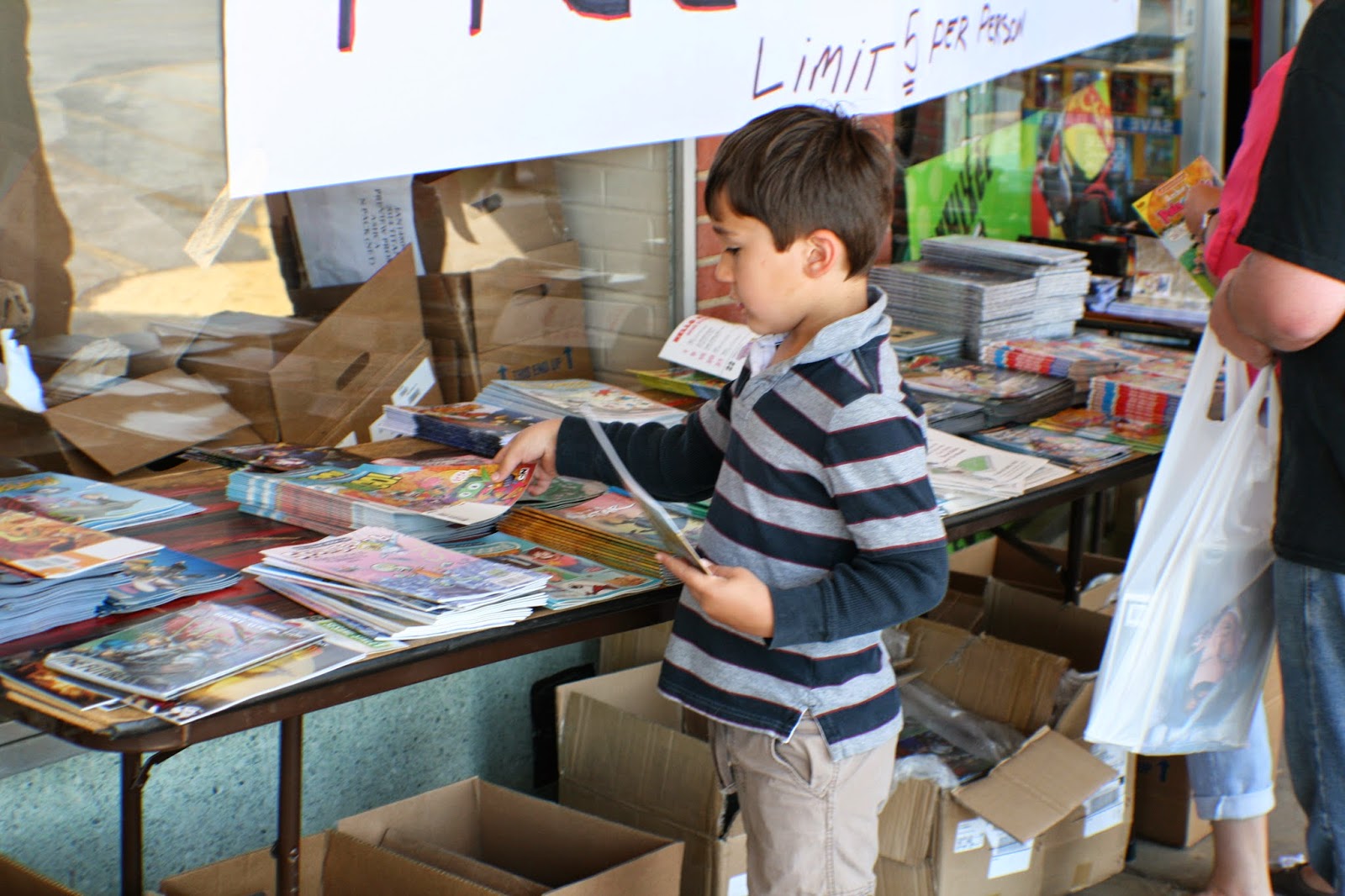 Outside was a sizable crowd of kids and families, which I thought boded well for the tables and artists inside.

Once Joseph and I entered the building, we noticed two things.  One was that all the tables were taken, usually by single persons who could've condensed down to half a table.  That's cool, it's my fault for showing up late.  Secondly, these guys were taking their setups a little more seriously than I thought they would, but not as seriously as I have to when I'm flying for a con.  Thirdly, it seemed like the majority of audience interest was centered on rifling through the boxes of old superhero comics located on tables in the center of the room.

While I was looking around at the comics, Joseph snapped photos of the attending artists. 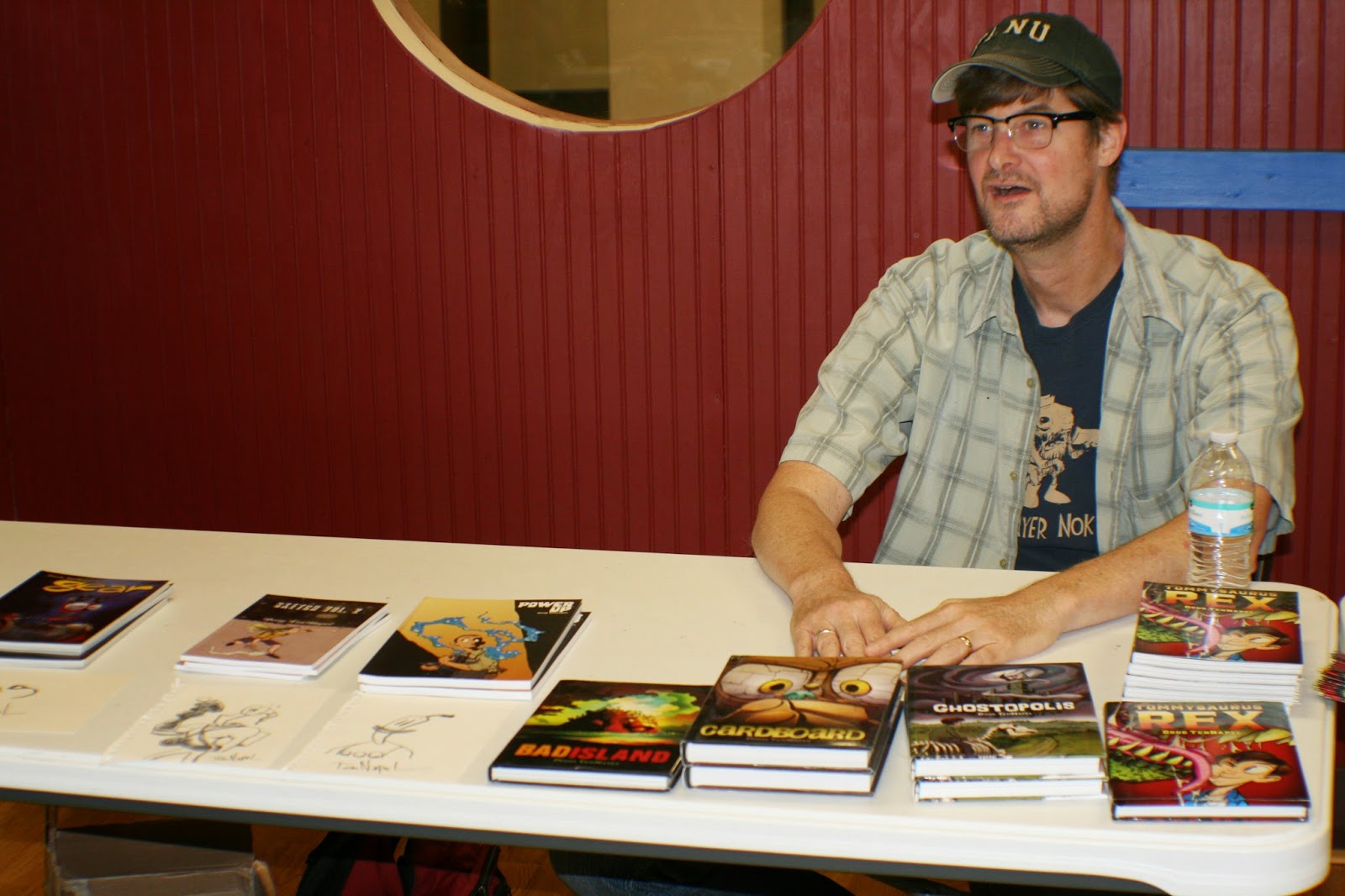 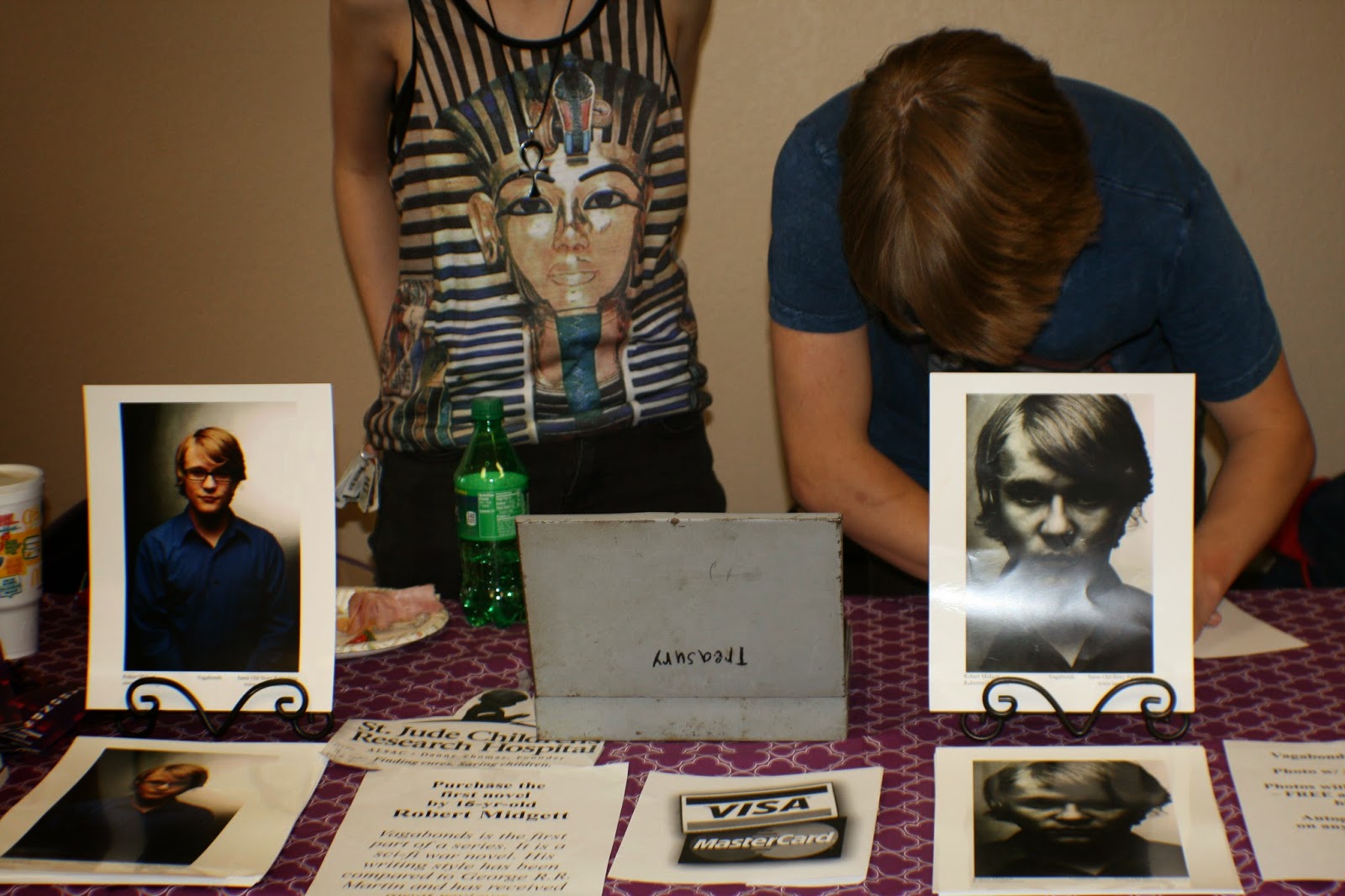 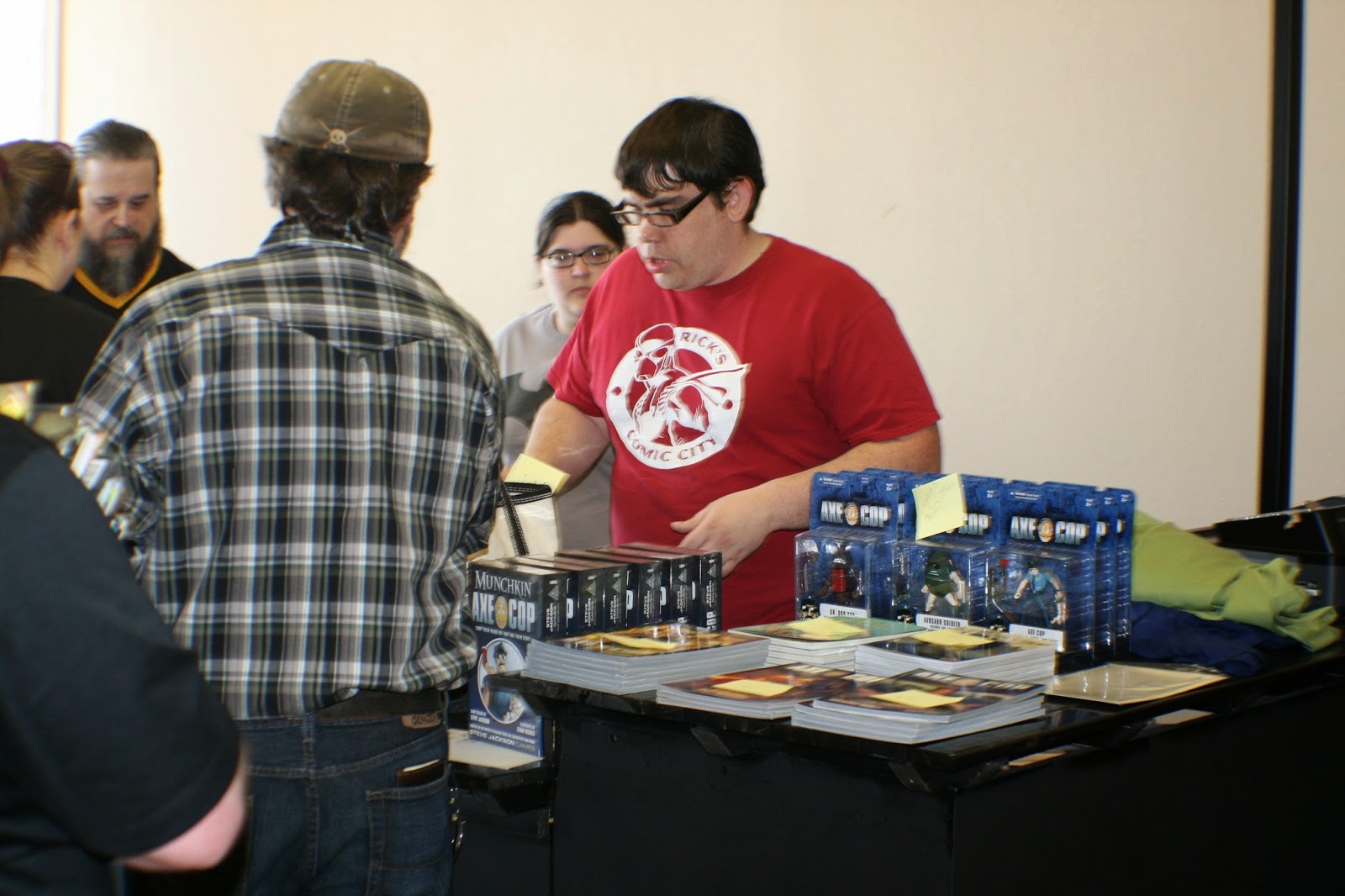 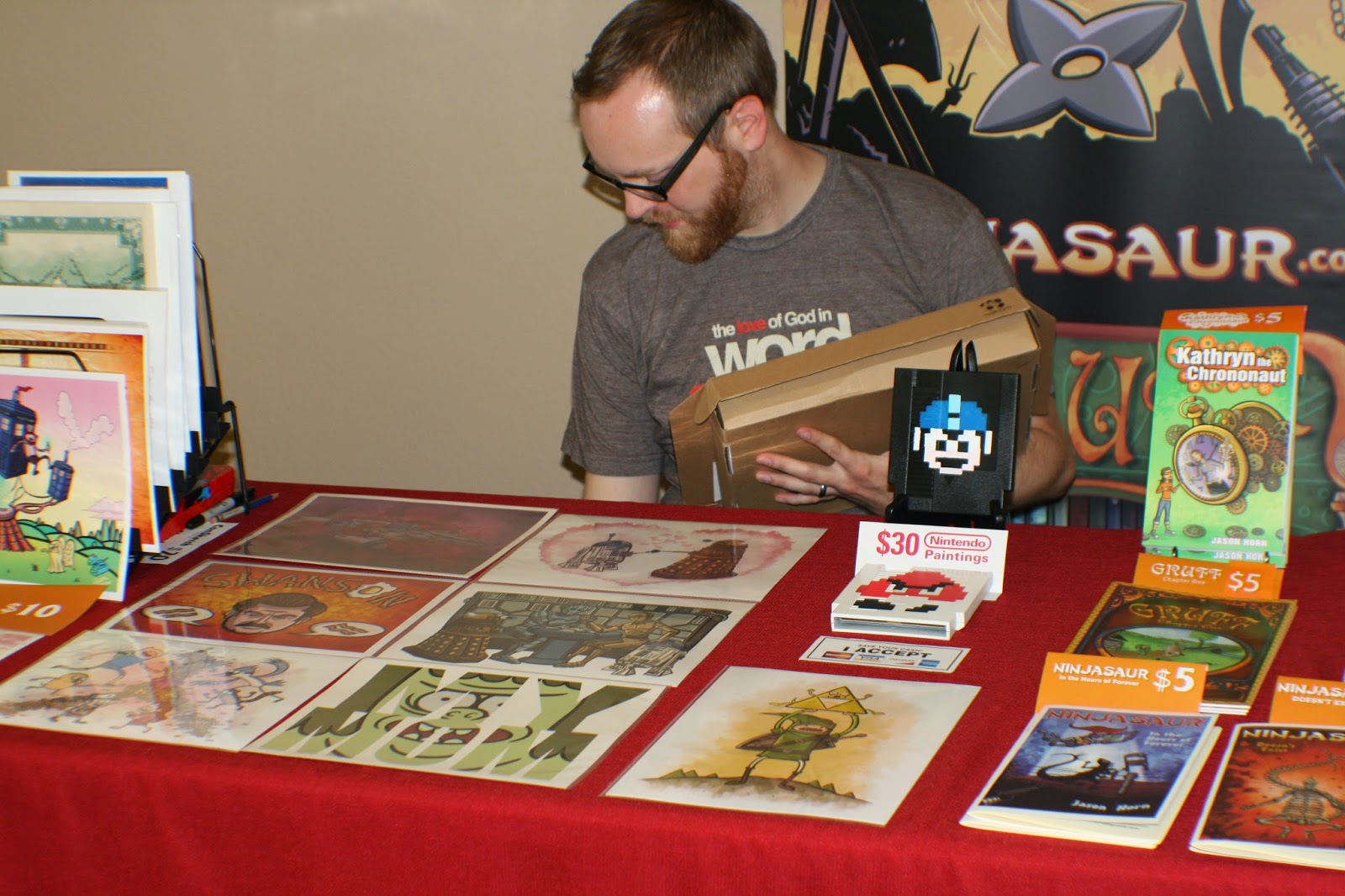 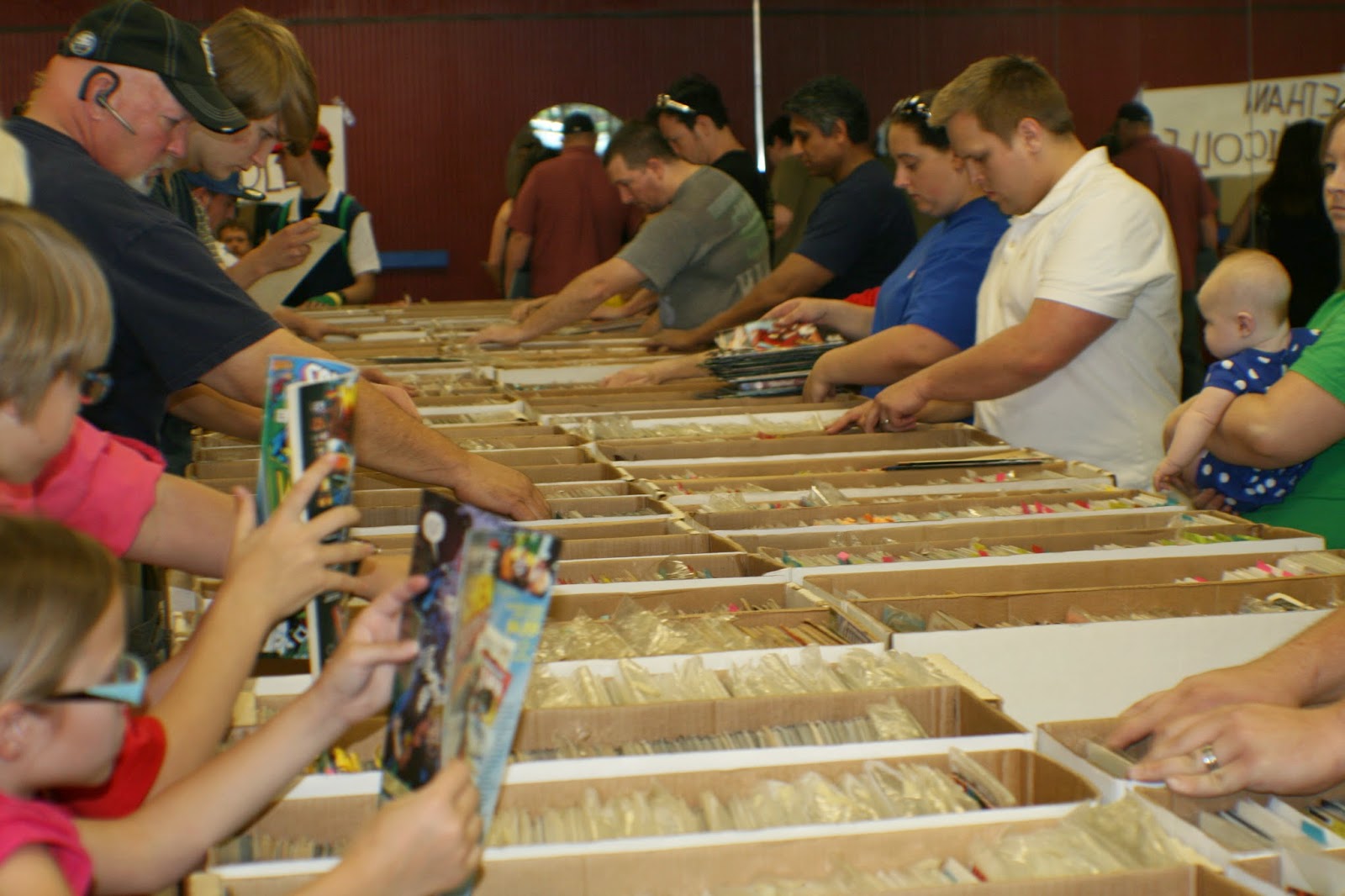 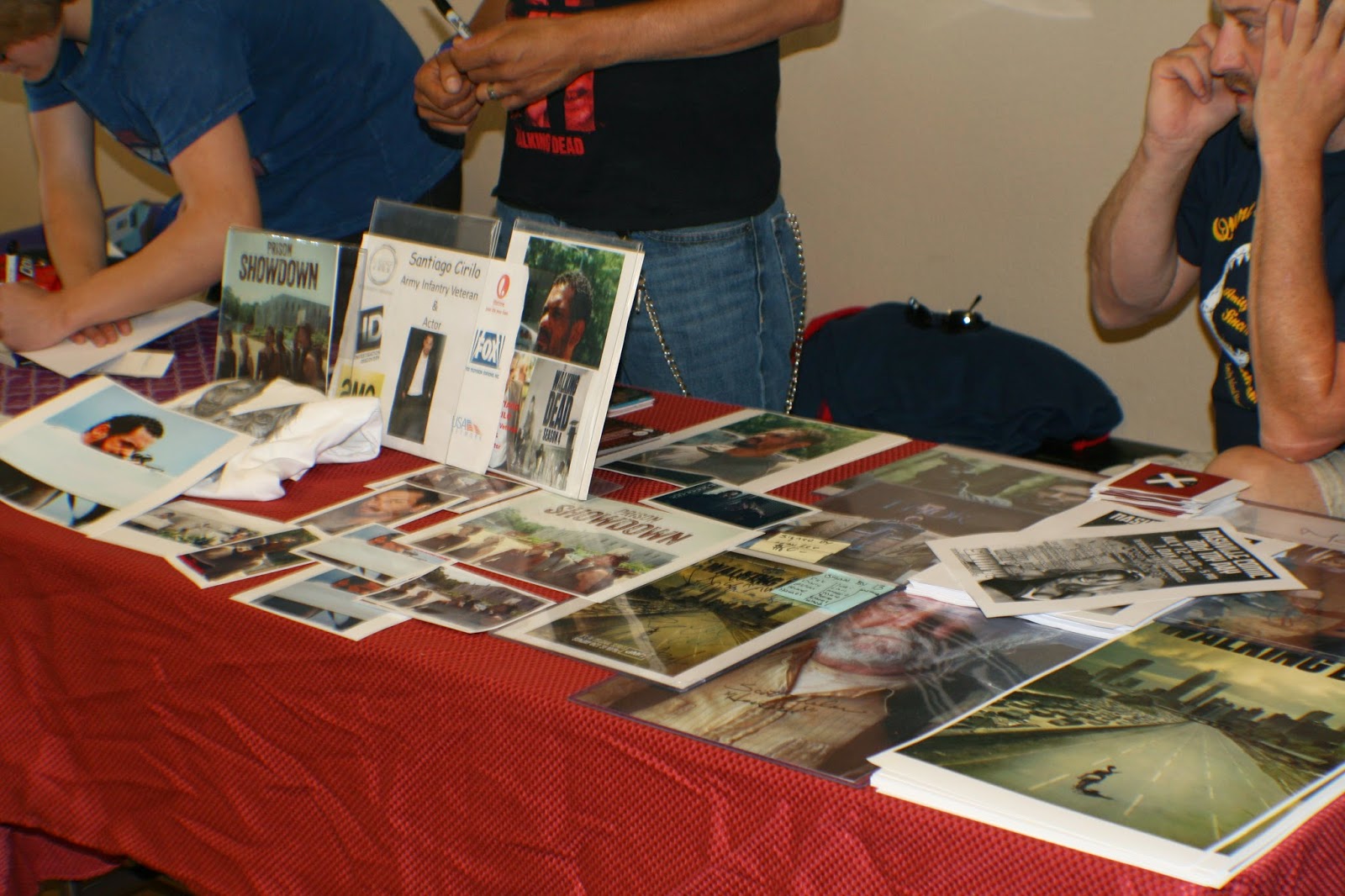 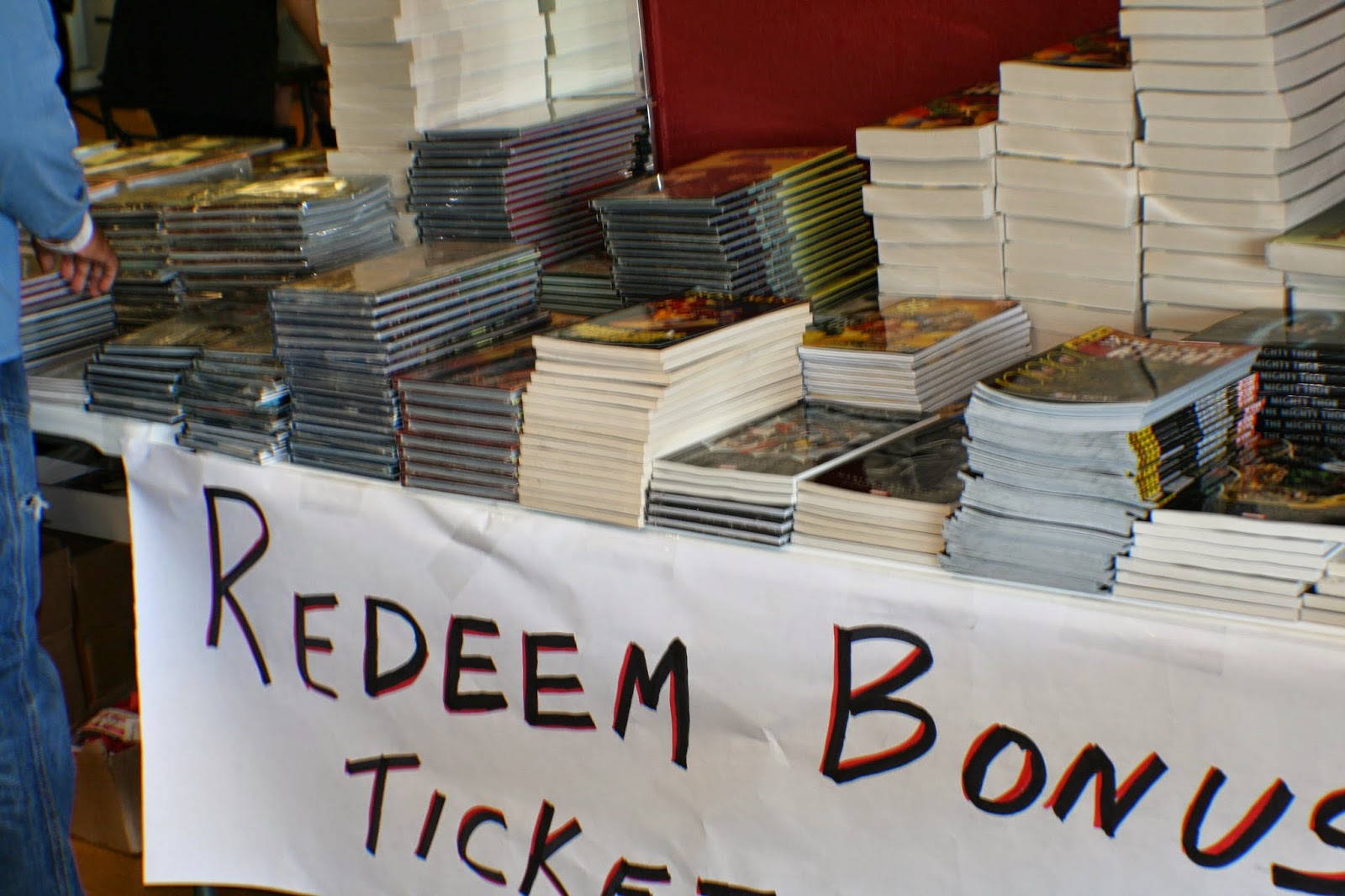 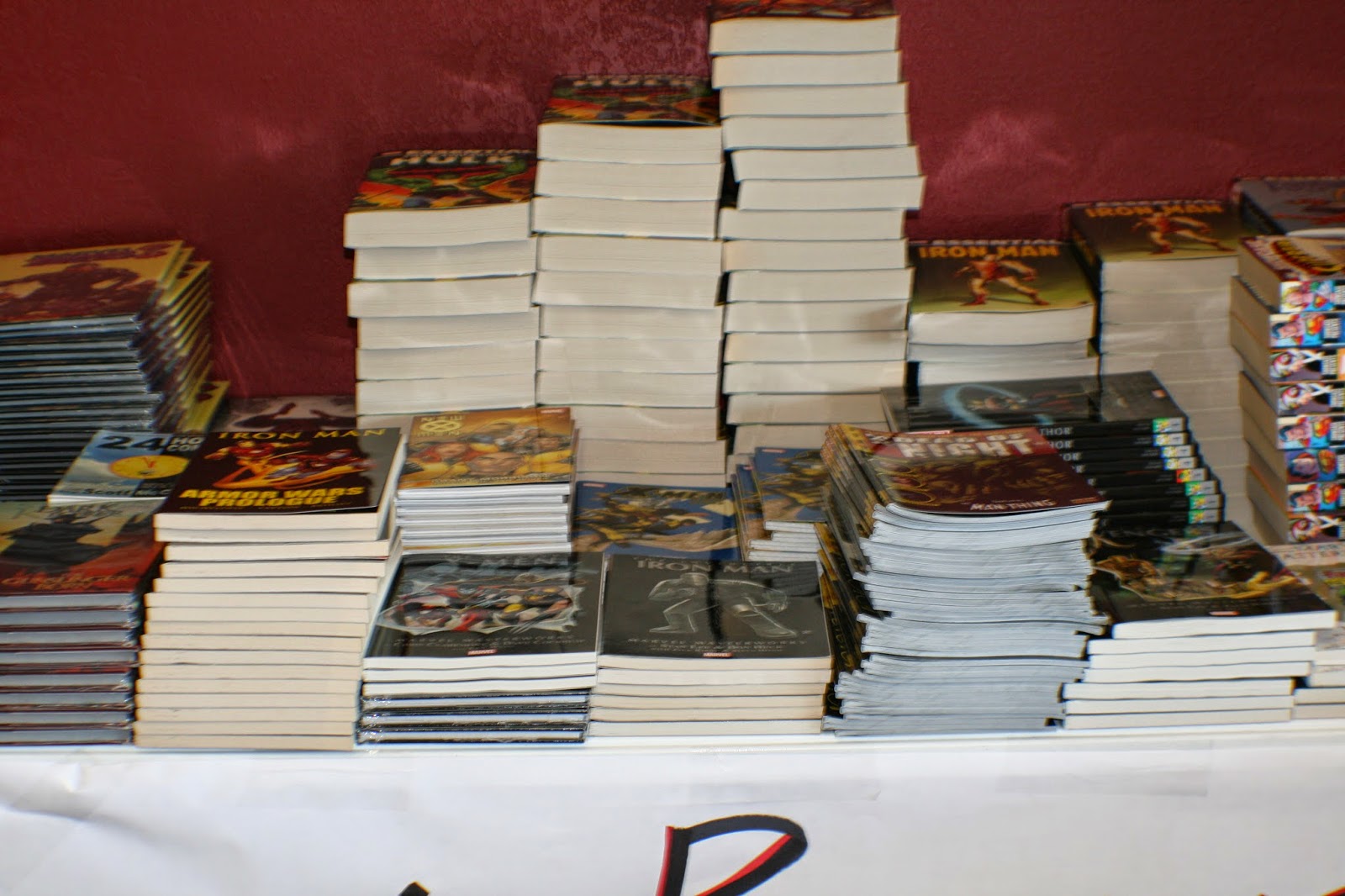 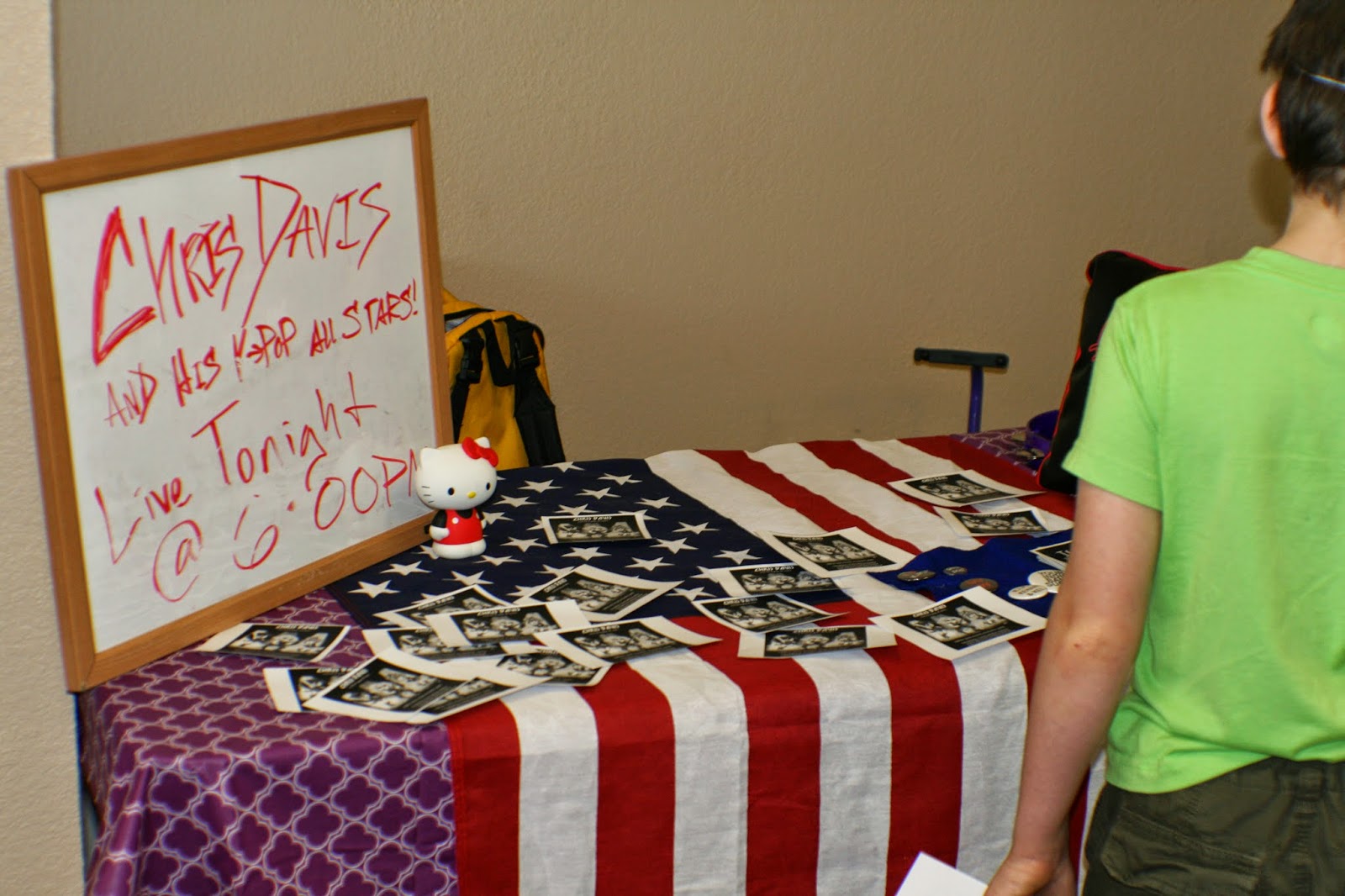 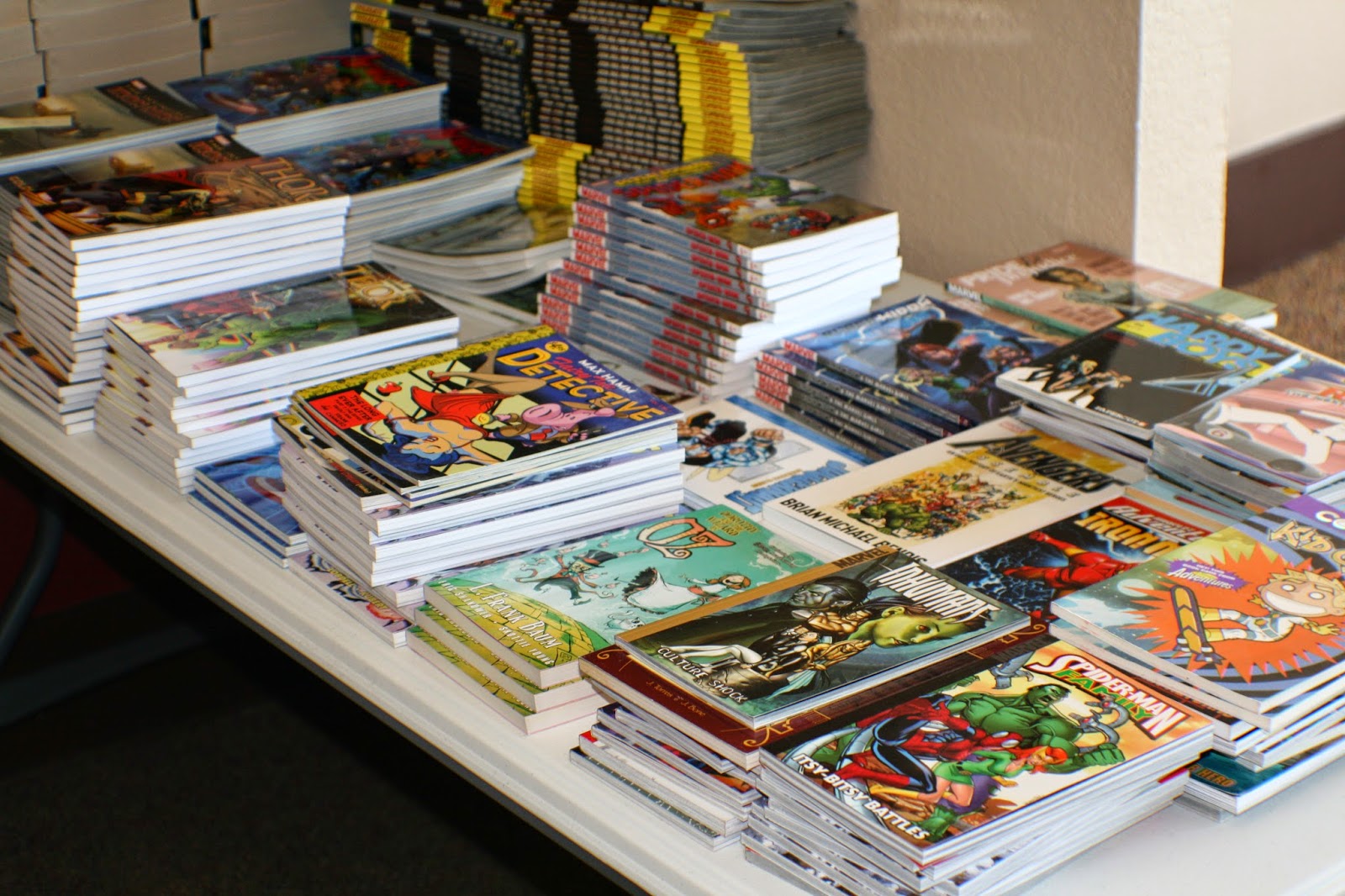 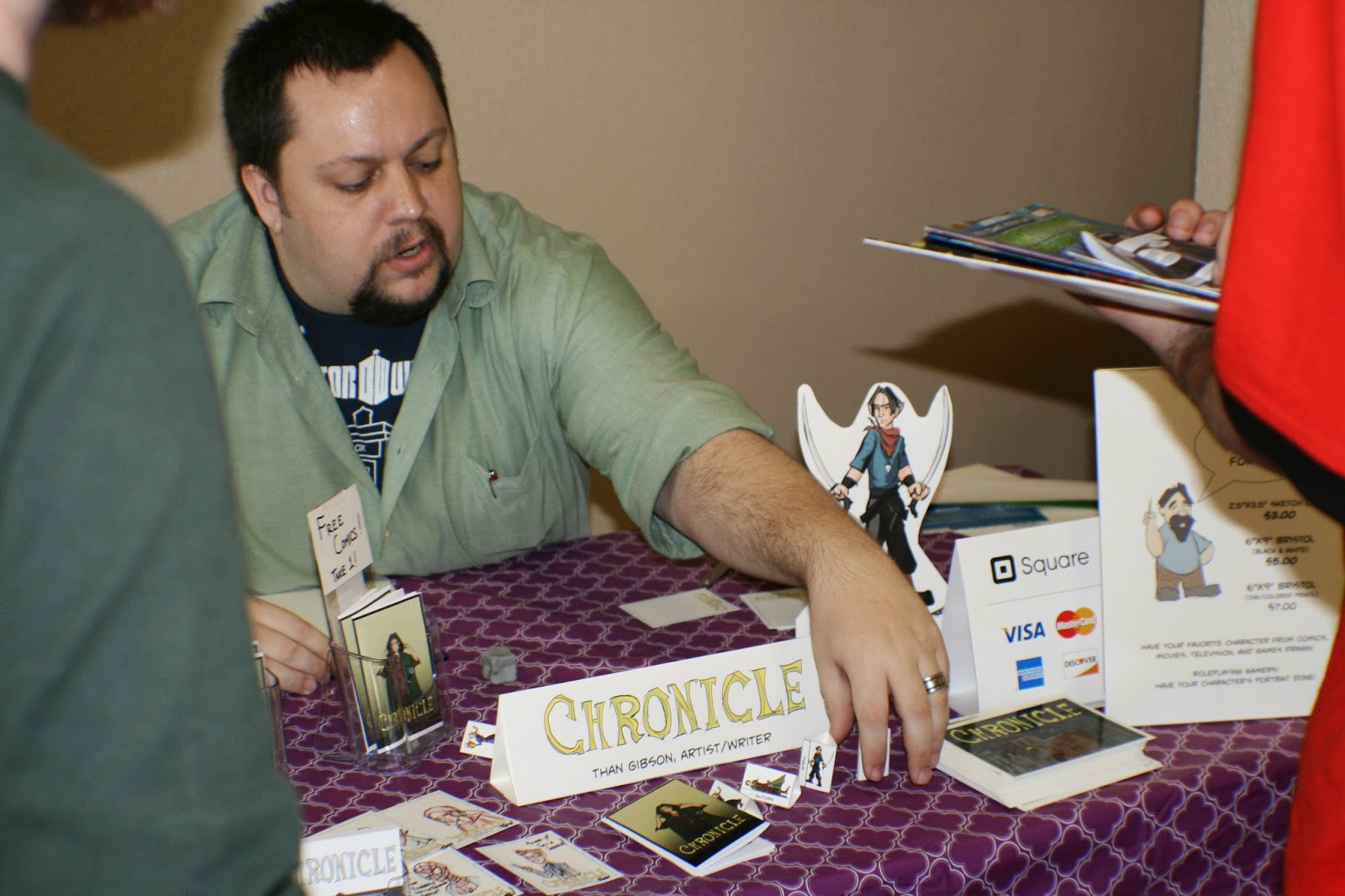 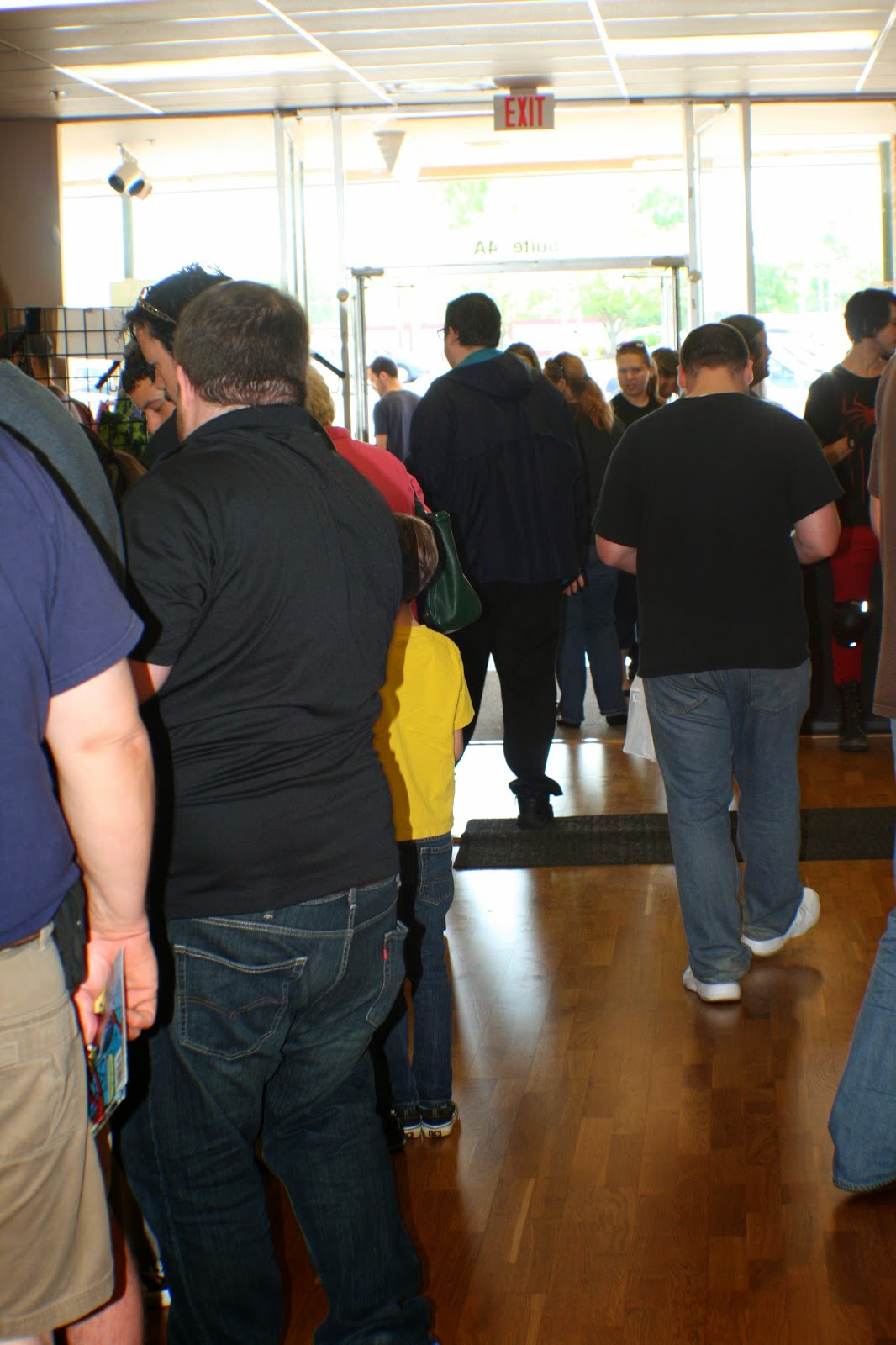 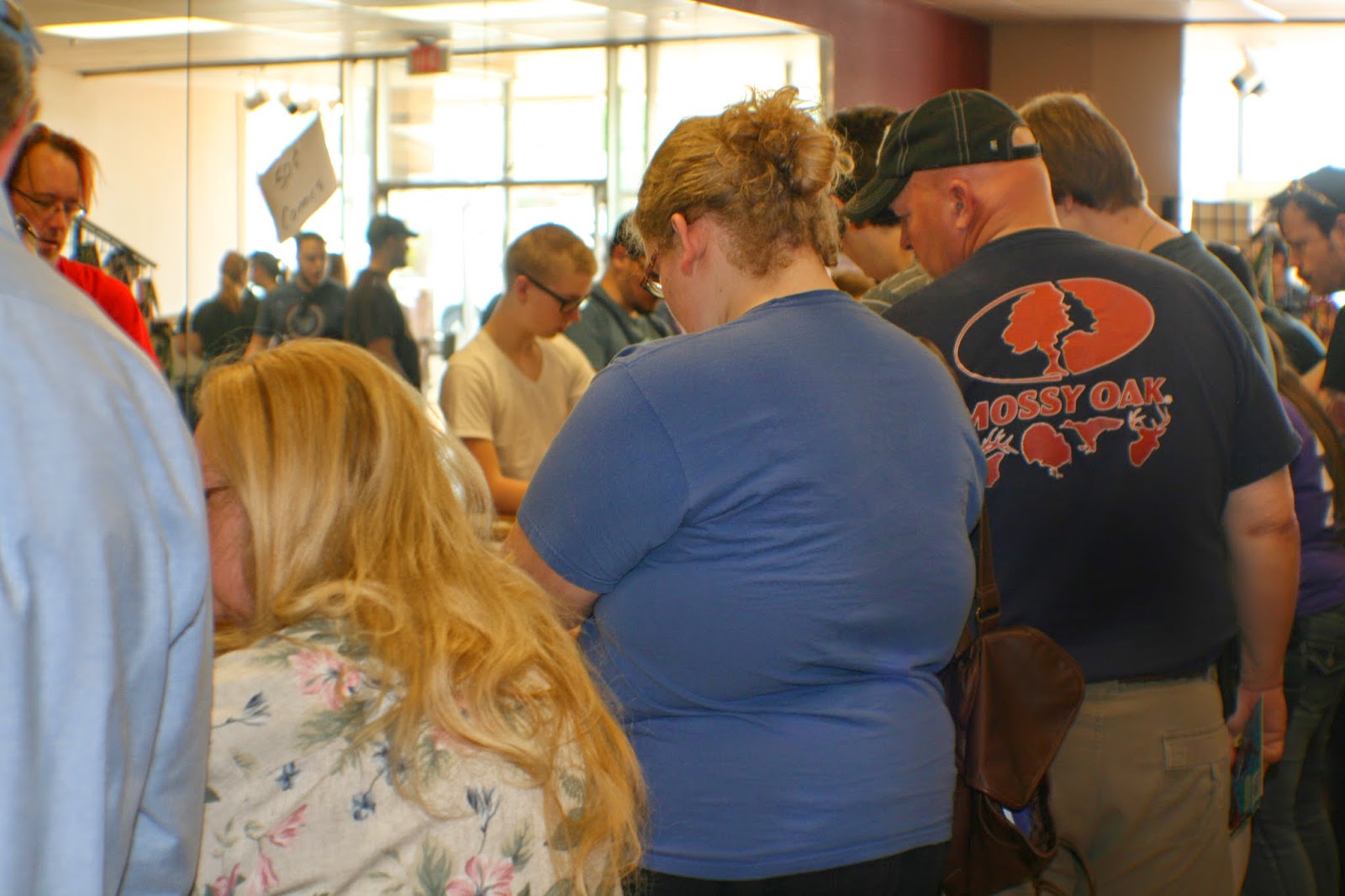 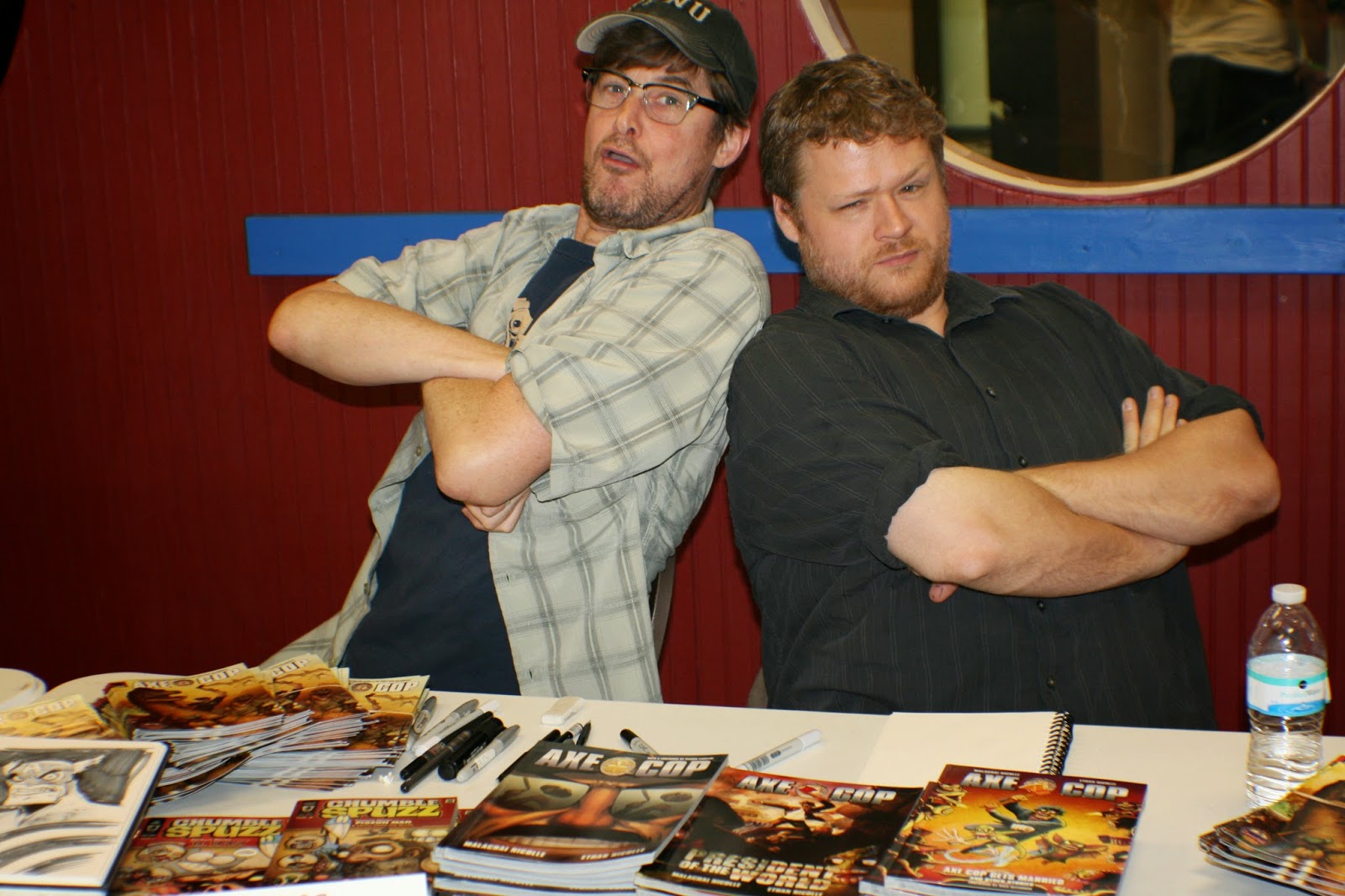 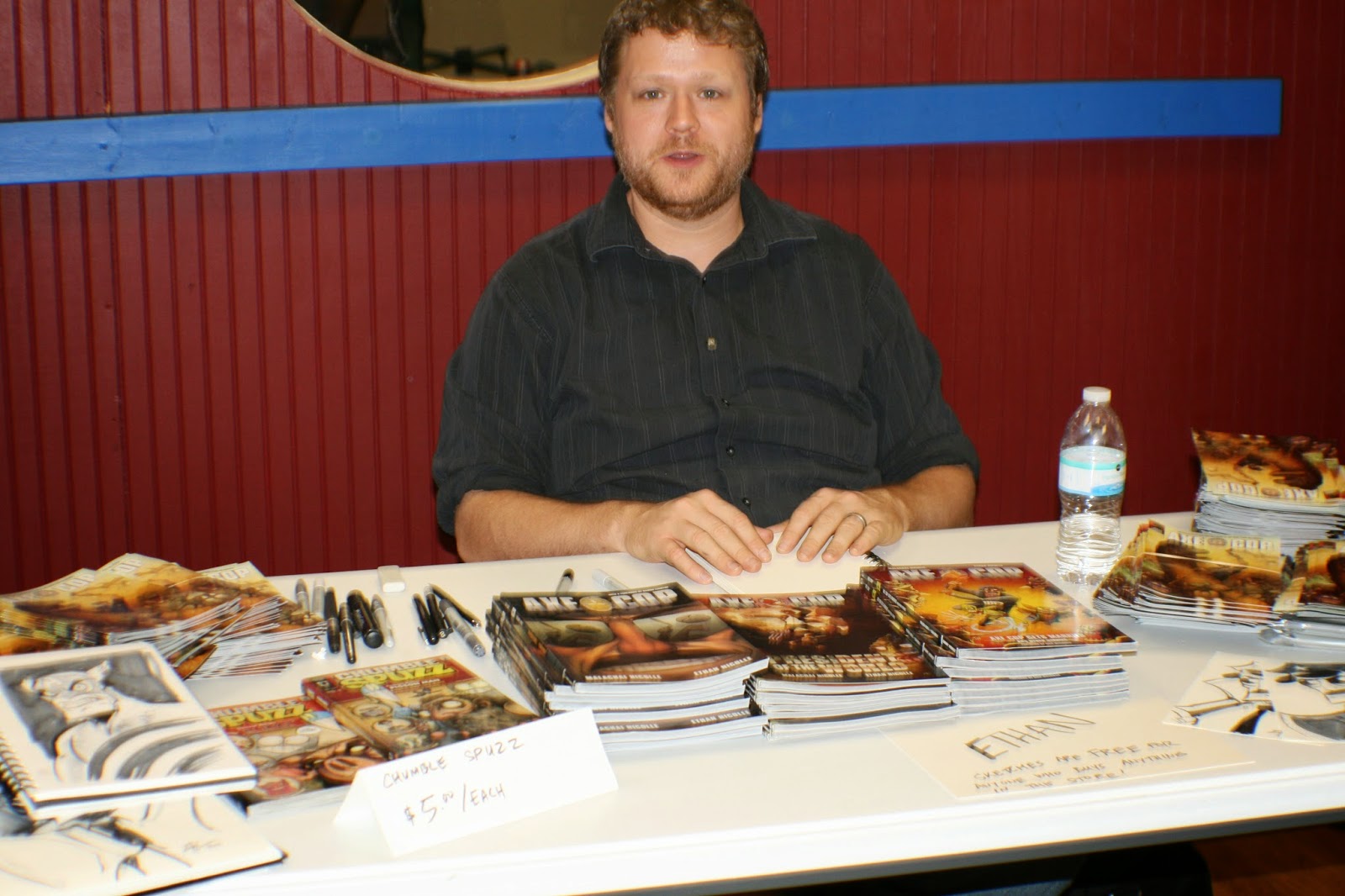 For me, as an artist and as a comic loving customer, I didn't see a whole lot this year at Free Comic Book Day that encouraged me to buy.  Although I usually try to buy directly from the artists, most of what was sold at FCBD was superhero in nature- bulky muscle bound guys fighting baddies.  Just not my scene.  The vast majority of tables were held by male artists, with a sole female artist in attendance, another thing that sorta breaks my heart.  I can only assume that other female artists, like myself, not being into superhero comics or comic shop culture, don't visit comic shops often enough to realize that some shops offer table space to local artists.

After browsing the Free Comic Book Day selection and making our purchases, we headed next door to Rick's Comics, to see what sort of comic shop it really was. 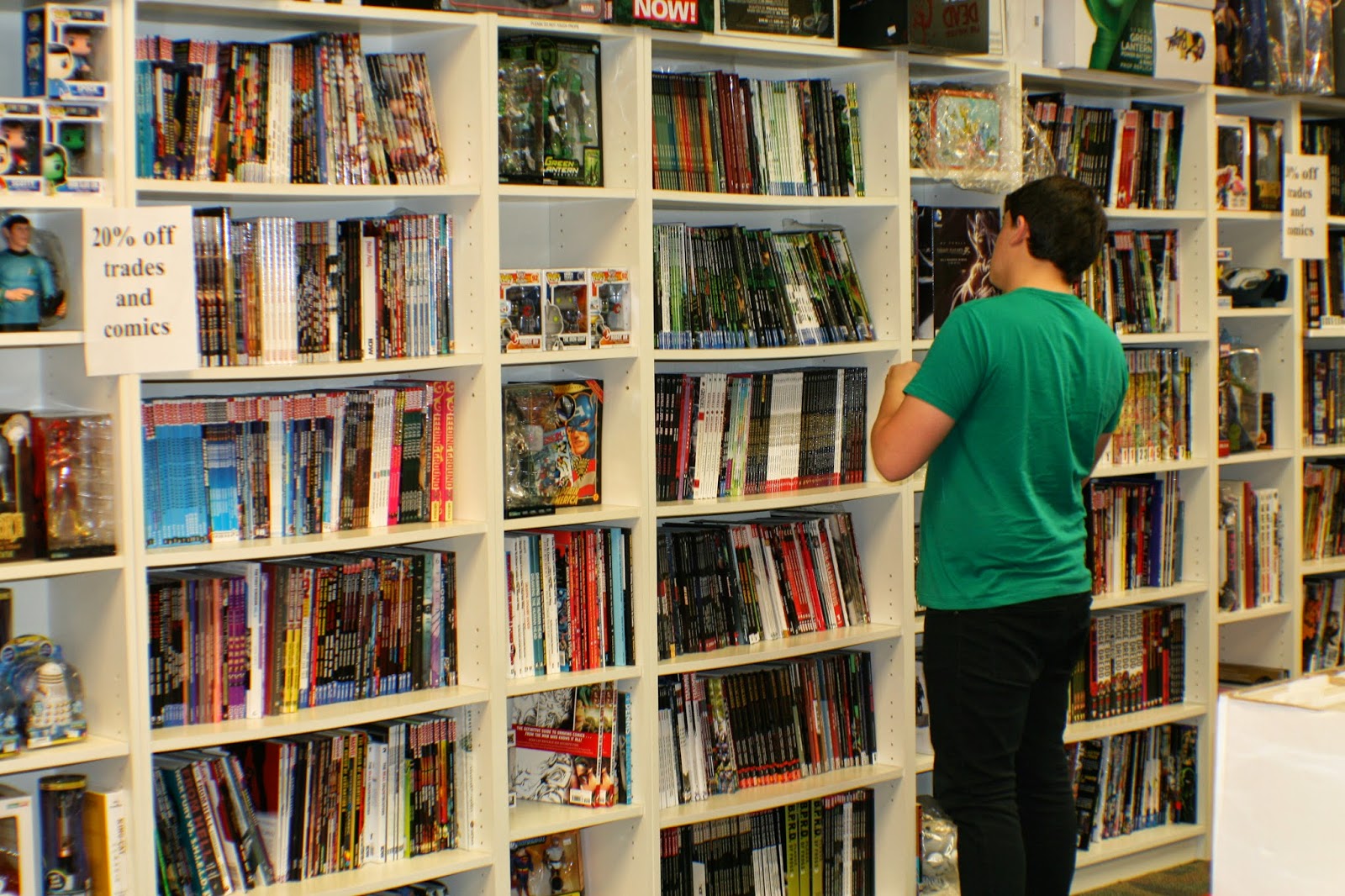 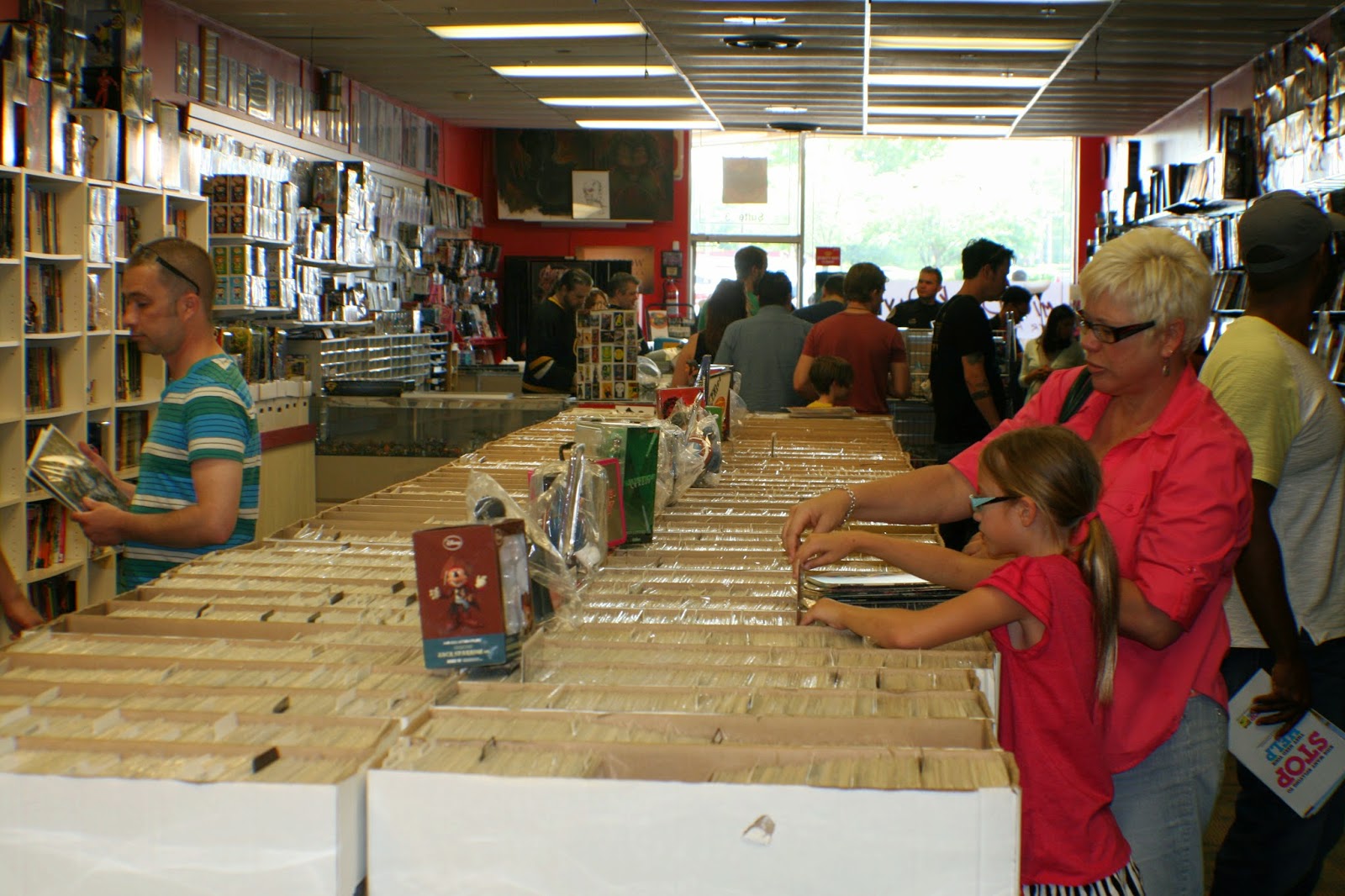 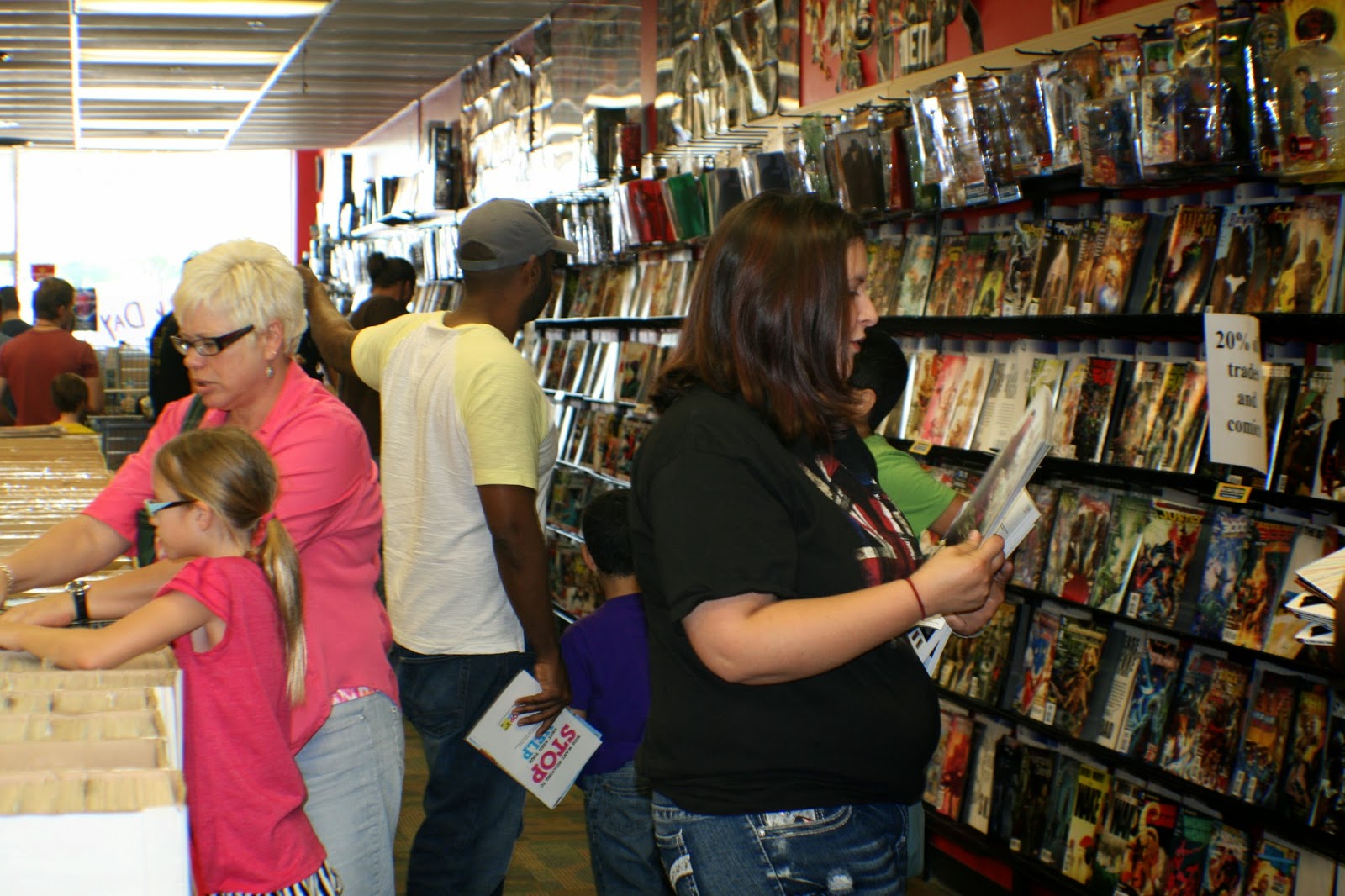 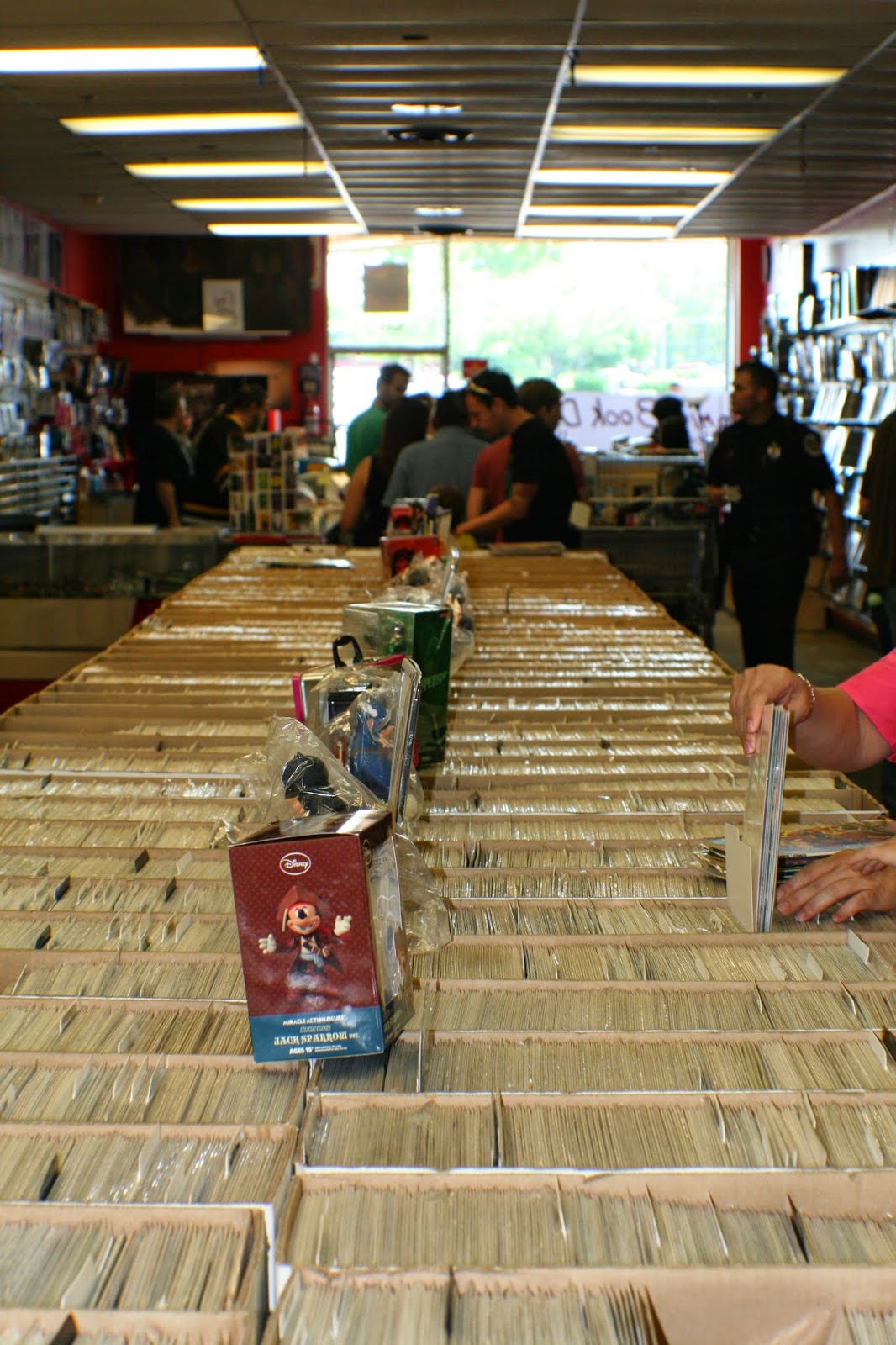 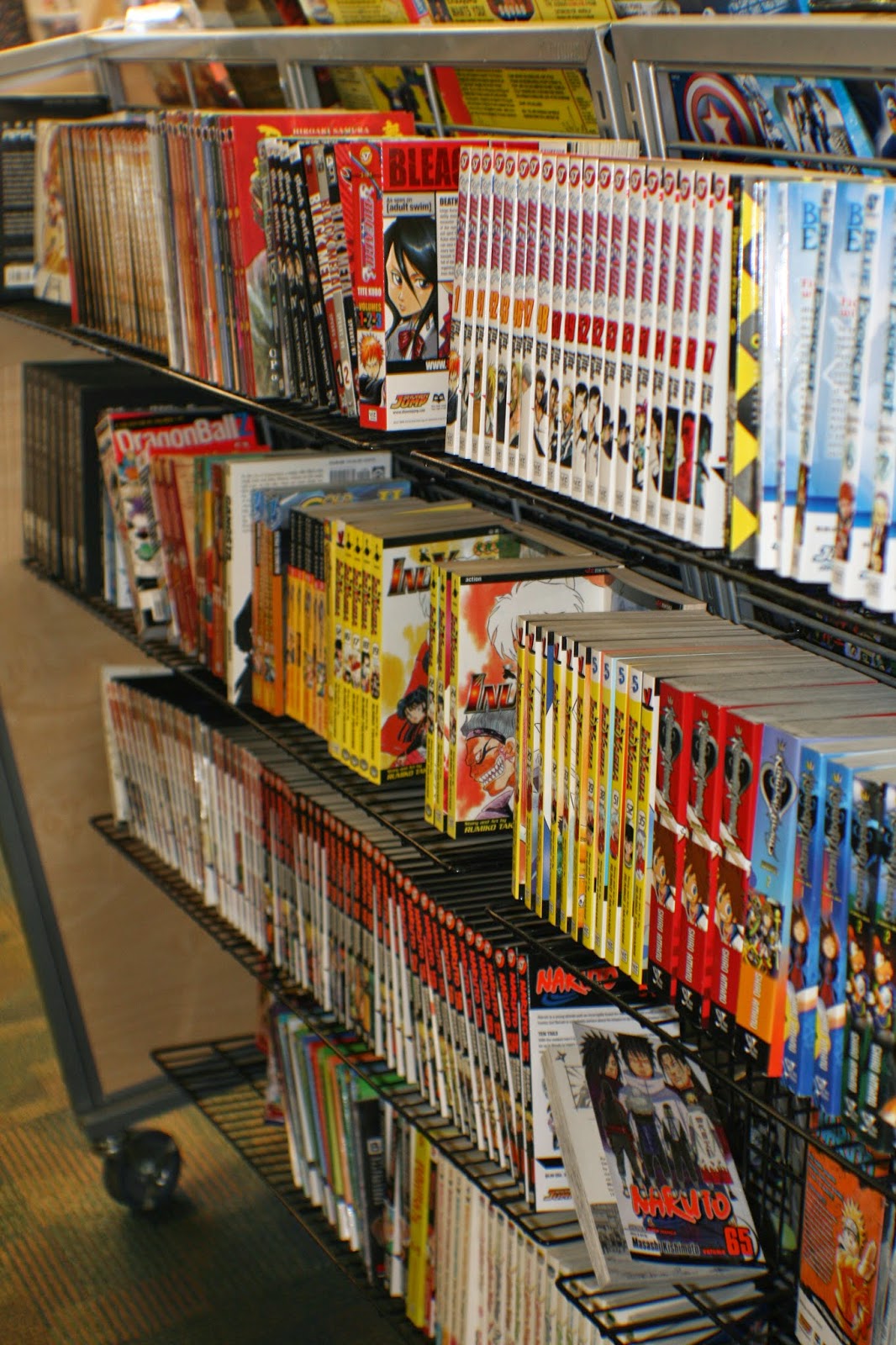 Rick's has a fairly sizable selection of comics extending far beyond the superhero genre.  There's a large selection of indie comics and a modest manga section.  The shop is clean, well organized, and the staff friendly.  Rick's is a bit of a drive (40 minutes) for me, but I could justify making the occasional trip to get caught on up favorite series, especially since it's a far better alternative to both Nashville Great Escapes.

Although I wasn't able to table at a Free Comic Book Day event this year, I fully intend to do so next year, and I plan on promoting my presence and encouraging other female artists to apply for table space.  If reading this post has made you interested in tabling at your local shop, you should definitely contact them to see if they participate in the event, and if they don't, strongly encourage them to do so.