If you enjoy my reviews (or guest reviews!) you should consider donating to my Paypal.  Donations go directly toward paying for materials to test or to rewarding those who've written reviews for Keep on Truckin' Nattosoup.  Donations also offer incentive to post more often, and offer a variety of content.  If there's something you'd like to see reviewed, you can always send me a line via email or comment, and if there's something you'd DEFINITELY want to see reviewed, you can contact me for how to donate the product itself.--Becca

I've heard Google AdWords ads were affordable and could help reach a broad audience and Facebook ads were effective at reaching a particular audience. GoDaddy, a terrible service, offers $100 AdWords and $50 Facebook ads coupons. So I figured it couldn't hurt to take out ads for 7" Kara, Becca's charming children's comic.  Although she's advertised it on this blog and sells it at conventions, she wanted to expand her potential audience, and we thought a trial with both advertising services might be an excellent way to do that.  Since the ads were free, there was little to lose besides time.

I started with Google AdWords because I knew it would require less effort and copy. Using the coupon was a bit finicky. I created an AdWord account assuming I needed to in order to redeem the offer. Unfortunately, this invalidated the offer on said account. So I used another Google account and was on my way.

I know a lot of people make purchases from their phones, but I personally don't. So I choose not to optimize the ad for mobile. Google has a good system to demo the ad, mostly because it's similar no matter how or when it's being used.

With the majority of online ad systems, there is an option to pay per click. But online ad networks are not cut and dry. It's a complex, split second decision which ad to deliver and what that particular spot will cost given what is known about the user and what the ad is. I opted to pay per click because it's the most natural to me. My goal was to sell books, not familiarize people with the book like Coke-cola might want to remind you of their product.

The first thing I did was to add a few hundred keywords I believed someone who would be interested in a comic like 7" Kara might utilize. This is distinct from someone looking to buy comics. For instance, someone searching for Studio Ghibli may be inclined to purchase this comic since there are a lot of similarities between Becca's work and the movies produced by Studio Ghibli.  I decided to override some of the maximum amounts I was willing to pay for particular searches for the ad to be featured. This not only has the affect of making the ad a top ad more often, but ensures it is displayed for that query more often. On average I was 'paying' $1.20 or so a click for these high profile searches such as 'girls comic'. 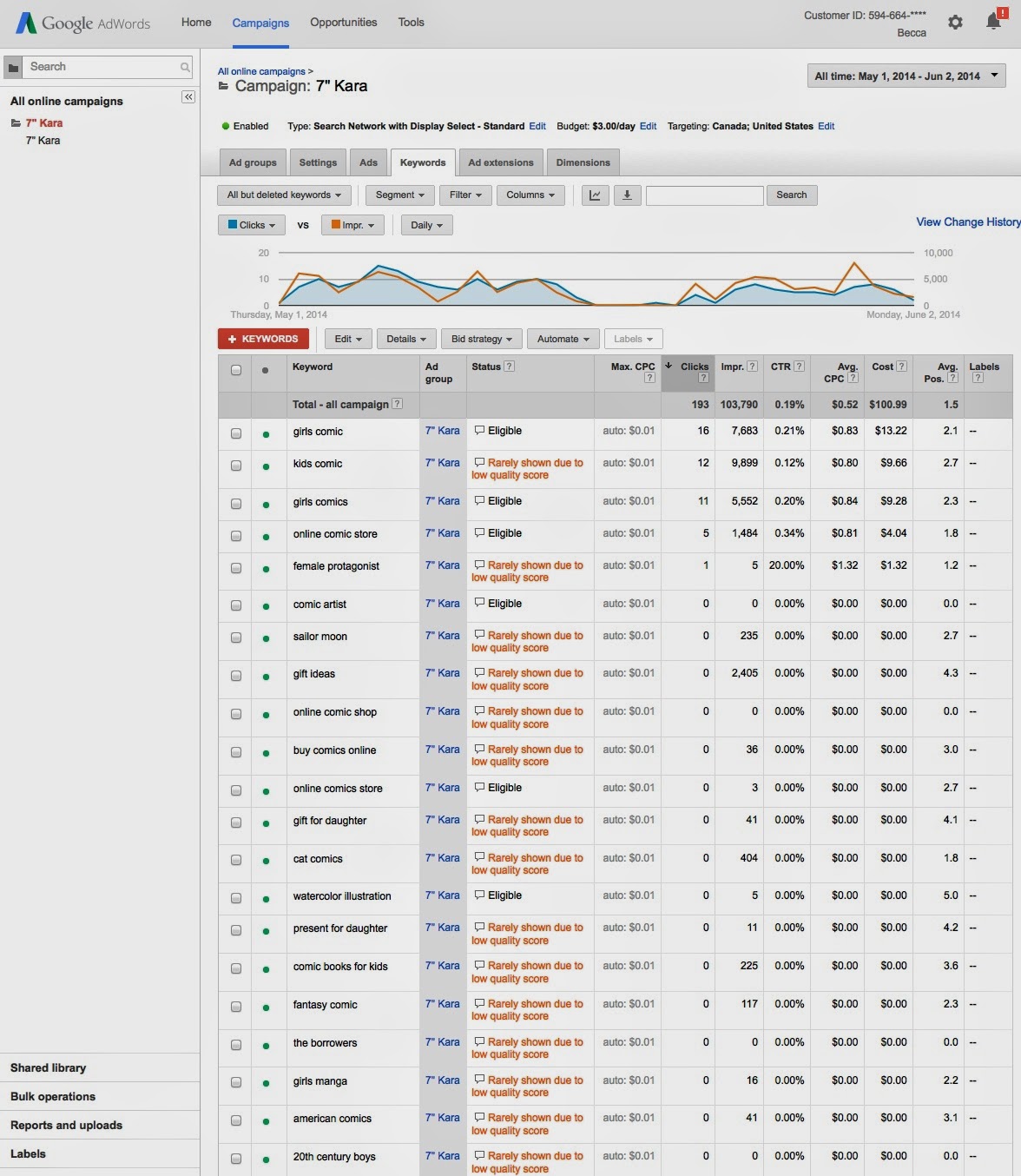 I later realized setting high maximum purchases for primary keywords was not necessary. So I reset those words back to auto maximums which fluctuates with the market by time of day, frequency of search, etc. The large dip in the center of the graph above is a result of resetting this. I realized that, much like search results, Google is more likely to display an ad if some of the keywords of the search are within the ad. Thus I changed the copy as follows which is reflected in the creative copy above:
After this, the ad was receiving roughly as many clicks and views as previously with the high payouts, but now 'paying' roughly $0.70 a click. In addition, I added keywords here and there as they came to mind, but they didn't seem to affect the ad much. Other than this mistake on my part, the service was quite transparent and easy for me to use.

Creating copy for Facebook ads is quite difficult if you're new to it. Their tool did not guide me in what type of imagey would be used, how and where it would be displayed, and if I could switch out different pieces of artwork on the same ad. Nearest I can tell, most of the Facebook ads are roughly the same ratio, but some images are displayed the width of the Facebook page, while others are displayed at a mere 105px or so. The troubling part is that it appears it has to be the same image. So there was no option for placing text within the ad, because it would simply be unreadable and look bad at smaller resolutions. 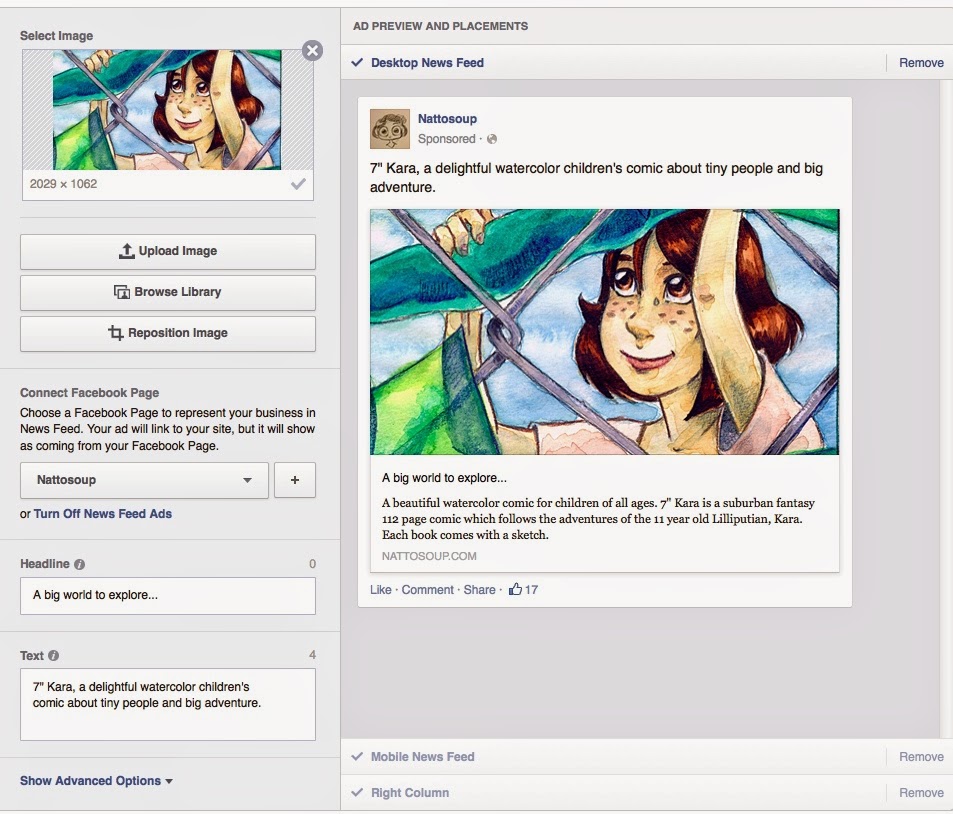 I could not find an option to alternate/cycling images, so I found something which met:
There were several options for varying lengths of text attached to the image, dependent on where it was being rendered. Luckily I had ample copy and could finagle it into the character limits.
Once the ad was created, I could toggle between previews as users would see them on different devices in different areas of the site. 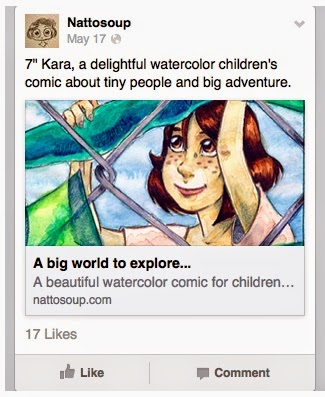 But getting to this point was frustrating and not nearly as transparent as Google AdWords.

Once the copy was settled, Facebook shined. It displayed hundreds of options to target specific types of users. The beauty of Facebook is that so much is known about their user demographics. Users feel like they're defining themselves online by liking products they use or adore, and they are more than willing to enter information such as if they are a parent. So if you known your audience, Facebook can open the door just wide enough to let only your exact audience in to see your ad. It is really a great marketing system. 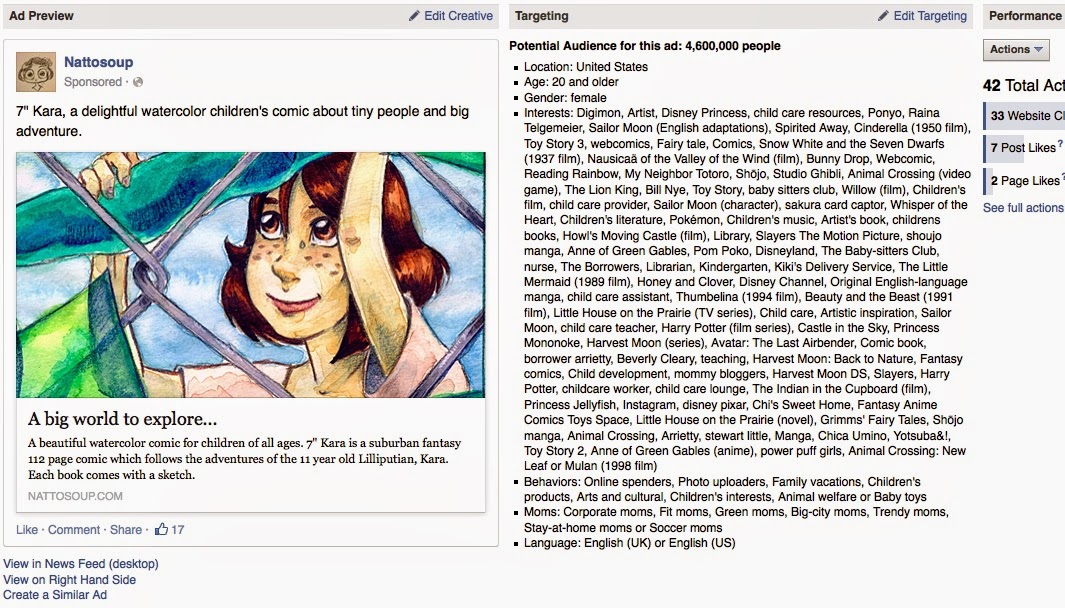 I don't mean to off-put anyone who does not meet the criteria I defined above. I was simply trying to best capture what an archetypical customer who has bought 7" Kara might be. Becca has certainly had older men (almost always fathers or uncles) purchase her book, but I thought it would be best to use the Facebook ad campaign to target the people I believed to be her potential customers who may have not heard of the book.

All in all, I 'spent' roughly $1.60 per click. Nearly all the interactions with the ad came from mobile news feed. Considering Becca's website does not have a mobile version, or a responsive design, this may have impacted some potential sales. 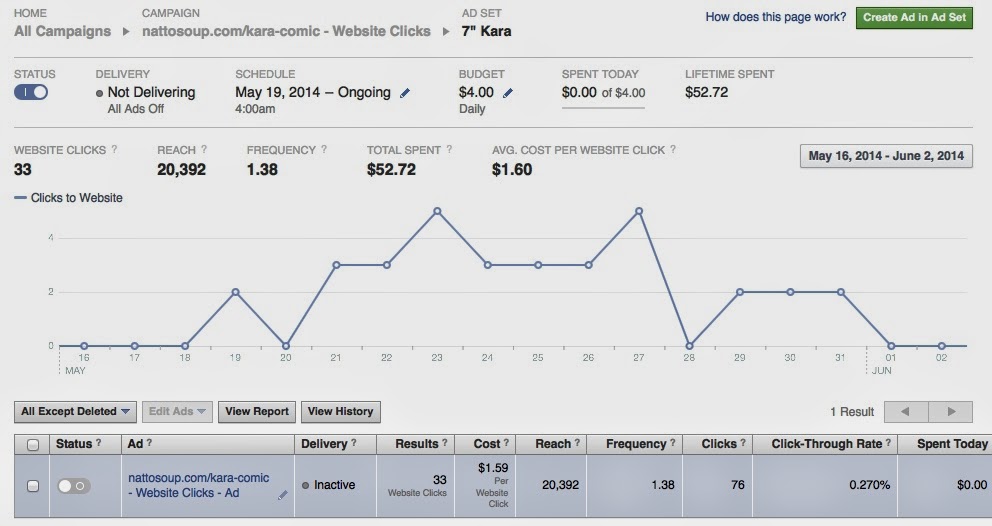 Other than a few hiccups with Google and Facebook's creative side frustrating me a bit, everything went smoothly. But despite more than 120,000 people seeing the ads, and more than 200 clicks, she didn't get any sales of 7" Kara through her website. This isn't to say she didn't get more blog and social network followers. Nor that people didn't purchase the book through Amazon in order to take advantage of prime (though I receive less profit from Amazon).

I definitely think it was worth it to take advantage of the Facebook and Google AdWords free offerings, but I simply can't justify continuing to run the ads right now. If you're running a KickStarter campaign, releasing a new online product, or have a push in commissions, I would highly recommend giving both Facebook and Google AdWords a try. That being said, consider that Becca didn't profit from the endeavor, and weigh this option appropriately with the many methods you can use to promote yourself.

Despite our efforts, I (Becca) saw no increase in comic sales that could be attributed to either Facebook ads or Google Adwords.  Perhaps the copy we wrote was not effective, or perhaps consumers are fairly immune to both ad services and glance over those offerings.  In the future, I'm thinking of taking out sponsorship ads on blogs (probably mommy blogs and possibly comic review blogs) and possibly buying Project Wonderful ad-space.  Finding and targeting an audience is difficult, especially if your intention is to sell something rather than just attract people to your free service.

$1.60 per click is fairly expensive, and may be far out of the budget of most self-publishing artists.  In addition, there have been allegations that Facebook pads their clicks and likes with bots, meaning that some of these results may not even be real humans.
Email Post
Labels: 7 Inch Kara Advertising Facebook Ads Google AdWords Sales Self Promotion