An Introduction to Applying Color Washes with Copic Markers


Rendering with Copic markers is pretty similar to rendering with watercolors.  Both mediums are transparent, allowing light to bounce off the paper beneath the color, causing the illustration to seem to glow from within.  Both mediums are suspended in some for of liquid- alcohol for the inks in Copic markers, and water for traditional watercolor.  Both react similarly to the addition of alcohol to the paper after the initial application of color.  Copics can even be rendered in such a way that they strongly resemble watercolor, particularly if you're using the super brush available on Copic Sketch and Caio.  Sadly there are enough differences between painting with watercolor and rendering with Copic markers that when you switch between the two, there might be a little brain recalibration necessary to achieve the affects you desire  in your current media.  A color wash is one of these effects that doesn't immediately transfer over, since Copic markers don't immediately lend themselves to the notion of large scale color application.

Having spent the last few months focusing on improving my watercoloring skills, I've come to appreciate the usefulness of a good color wash.  Unfortunately, applying a wash with Copic markers isn't as apparent as it would be with watercolor, and it took a little thought to determine how I should go about recreating the technique.  When faced with doing a large illustration such as the chapter 1 cover of 7" Kara, I decided to experiment with the Copic Wide markers to try and mimic the color field effect that a watercolor wash.  It took a little finessing, but in the end, I was very pleased with the result.

Washes are a background color that's applied early on in the rendering process.  They're useful for setting a mood before you begin layout down color and also good for unifying dissimilar colors.  If you're limited in your color selection, applying a wash first will help make your palette more unified. I think of color washes in this way: , a wash of color creates a world for all your colors to exist in together.

There are probably several ways you could go about applying a color wash with Copic markers.  Copic sells ink refills (Various Ink), and you could saturate your surface with Copic Colorless Blender and then paint on the Copic ink of your choice using a synthetic brush.  You could also apply colorless blender and then use the nib end of your Copic marker to comparatively broad strokes, going over that with colorless blender to smooth out the overlap lines.  Having never tested any of these methods, I can't vouch for their effectiveness, although I imagine the second would be a huge pain in the rear and would result in a lot of streaking.

What I do is somewhere in between the two methods.  Copic sells an extra wide marker that offers a compromise between effect and convenience.   The available color range isn't as wide (it's 36 markers, I believe) as you would see in markers like the Copic Sketch, Copic Ciao, or the original Copic, but Copic also sells blank Copic Wide markers, which can be easily filled with the Various Ink of your choice.  I'll do a post about that later this week.

When selecting colors for your wash, keep in mind that the alcohol in the ink you'll apply later will nullify that original wash a bit.  Even knowing that, I still like to work with light colors for washes since rendering with Copic markers is playing with light in much the same way watercolors play with light.  You want your lighter colors to sing just as much as your darker hues.

This is just a list of colors that I would find useful in creating washes.  There's no need to try and acquire all of them, as one color per color family blended out with colorless blender to varying degrees will probably suffice.

This demonstration is pretty bare bones.  I have a little mixed media book where I test and demonstrate techniques- it's a Strathmore 300 Series mixed media journal, I use it for my alcohol marker tests.  I usually work on 400 series plate Bristol, but I get similar effects with the mixed media paper when working with markers, and it's far less expensive on my part.

I doodled a little image of Kara using a Hi-Tec C pen made by Pentel.  I chose this pen because it has a fast drying time and is relatively Copic safe.  When I do Copic studies in my sketchbook, this is the pen I reach for.


Using Copic Wide Markers to Create a Wash of Color 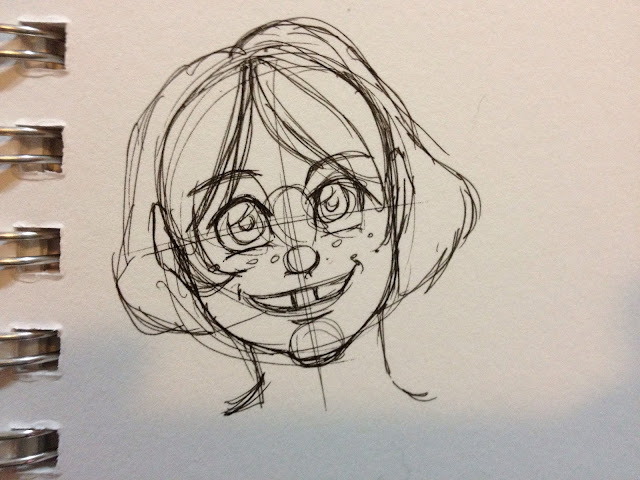 First I sketch out my image. 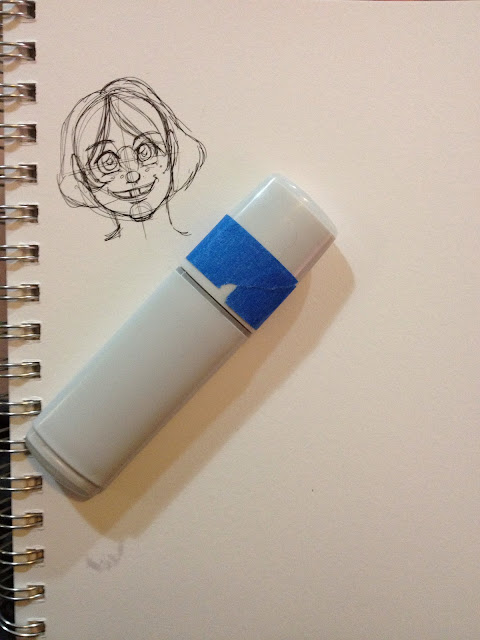 Then I apply a layer of Copic Colorless Blender.  This pre-saturates the paper, allowing my later application of color to be a little more seamless. 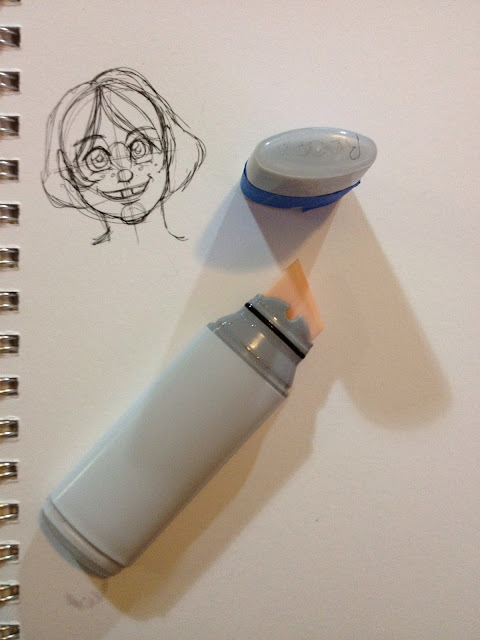 Then I apply my wash- R0000, one of the lightest pinks Copic offers.  Since this color wasn't available in Copic Wide, I simply filled a blank Copic Wide marker with the R0000 various ink.  This is a color I use A LOT in my marker rendering, particularly in skins and reds, both to put down color and to blend color out. 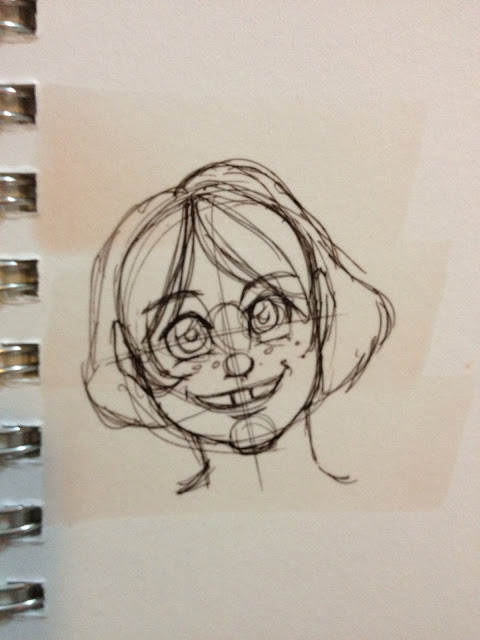 Even with a quick, sloppy application, the R0000 went down fairly smoothly, thanks to that application of Colorless Blender. 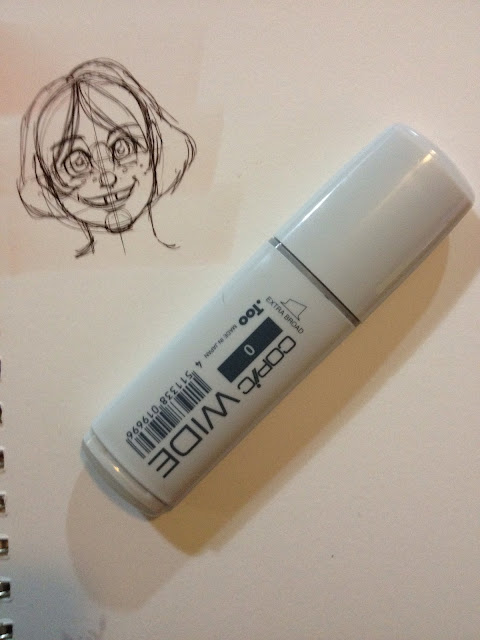 I then go over the R0000 with another application of Colorless Blender, to smooth out any left over overlapping lines and to tone down the R0000 a bit.  You don't want your wash to be too obvious or too dark, as it'll be hard to apply color later. 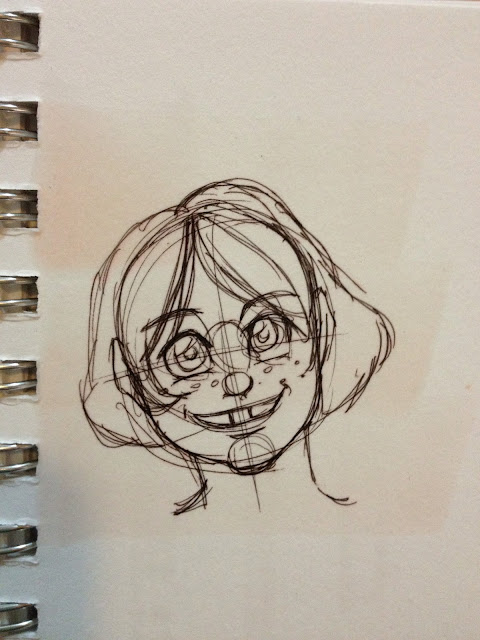 The finished application of color wash. 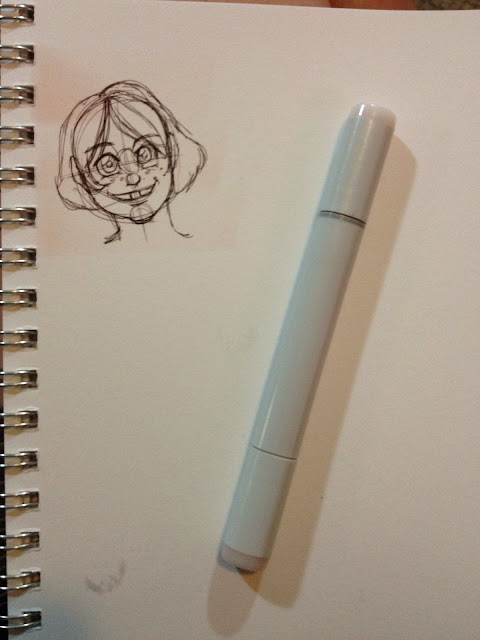 I then added some background shading on the head using my R0000 Copic Sketch (top left of head, bottom right under chin) to show where the light is. 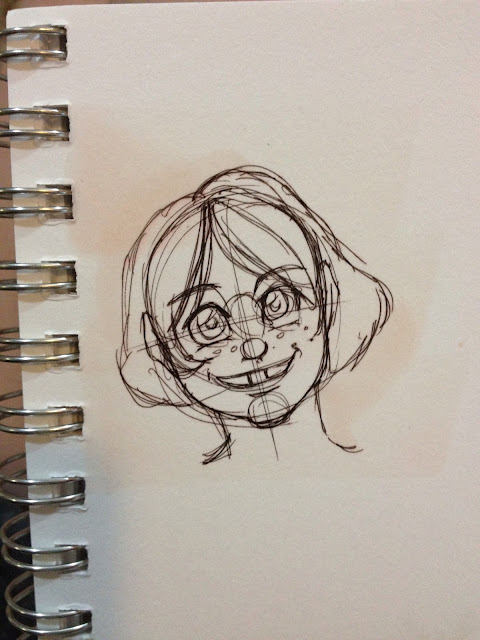 The light source will be coming from the top left, but it isnt' a particularly strong one. 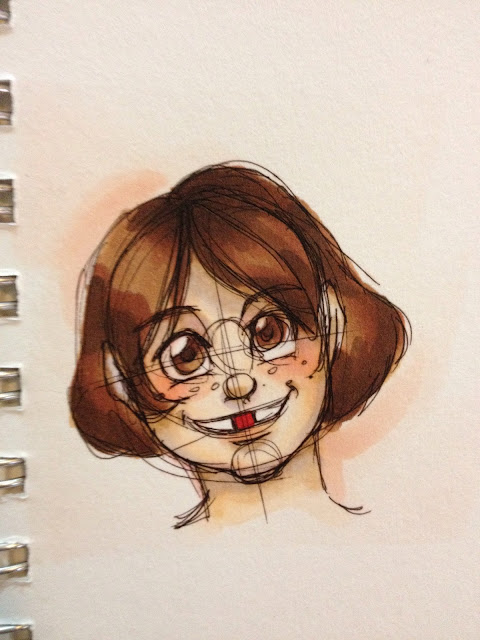 Effects of Applying a Wash to Color Harmony 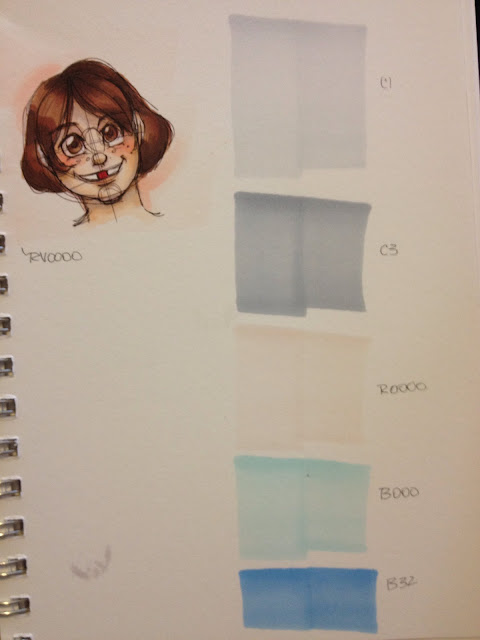 As you can see, the washes go a long way in unifying these colors into a cohesive palette. 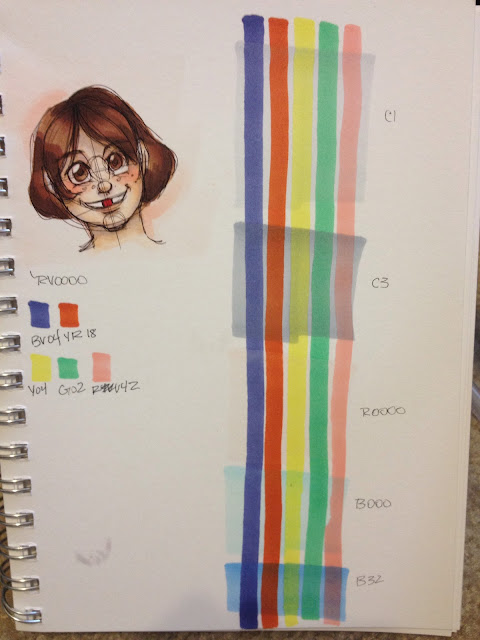 I realize that even just a single wash of color over a large area can really eat up a lot of ink.  I feel, however, that it might be an invaluable Copic marker technique, saving the artist a lot of time making swatches and possibly a lot of heartache, as the wash of color goes a long way in unifying the color of the illustration.  Applying a wash of color before rendering the piece can also help set the mood for the piece in general.  By applying a layer of Colorless Blender first, and by utilizing Copic's Wide markers, you can make your ink stretch a little further than you otherwise would by using Copic original or Copic Sketch markers.  By applying a layer of tone first, you'll also save ink in your individual markers, as you won't be combating the white of the page when trying to achieve depth of color.

For a long time, watercolor artists have utilized color washes to instantly create backgrounds, give depth to their pieces, insure color harmony, and to tone the paper before rendering. Unfortunately, I haven't seen many marker artists mimic this in their work, even though the theory applies.  Alcohol markers, particularly Copic markers, tend to be very expensive, so a technique like applying a wash of color before rendering may appear to be prohibitively expensive at the onset.  In addition, it may require the artist to purchase markers they might not otherwise have a use for in their collection.  However, it does not take many Copic Wide markers to make up a decent library for color washes, and the Various Ink refills can be used to refill any Copic marker, from Wide to Caio, making the Various Ink an investment.
Email Post
Labels: Copic Marker Copics wash