Watercolor brush pen.  Made by Akashiya, no less.  The phrase intrigued me as I browsed Jetpens, idly window shopping one cold winter evening.  I'd been getting into watercolors, trying out new things, and I felt open to a little experimentation.  Akashiya Sai watercolor brush pens offered a marker-like watercolor brush pen, and although I'd tried watercolor brush pens in the past and been burned, it'd been years since I'd tried one.  I'm a big fan of Japanese art supplies, and I'd wanted to take up watercolor sketching.  Watercolor brush pens would offer a very elegant solution, if they were capable of pulling off convincing watercolor effects.  I debated buying just one season of 5 colors, available in Summer, Winter, Spring, and Fall, but I knew that if I liked them, I'd want the rest immediately.  I added a full year to my cart, 20 colorful brush pens in a vivid assortment of hues, and proceeded to check out.

The rationalization immediately began.  Twenty watercolor brush pens?  Isn't that a bit..excessive?  Sure, I've tried pans and tubes, a variety of watercolor pencils, and even Inktense ink stones.  I'd tried a variety of brushes, water soluble inks, and water brushes.  Watercolor brush pens seemed the next logical step.  And I could review them for the blog.  So even if they were a dismal failure, some good would come from this expense.

A week later, the incessant banging on my door startled me.  It wasn't a fire, though you would've thought as much from the pounding, but my local not-so-friendly UPS man, with a package from Jetpens.  My AKASHIYA sAI watercolor brush pens had arrived.

Akashiya makes a darn attractive package, and I had high hopes for my Sai watercolor pens.  I'd used and reviewed and loved Akashiya products in the past, and their bamboo brush pen had permanent residence in among my oft-used ink pens.  Sai promised traditional Japanese colors, which reminded me of Holbien's Irodori line of watercolor, a line that produced muted colors that I loved.  I was pretty excited to test these out. 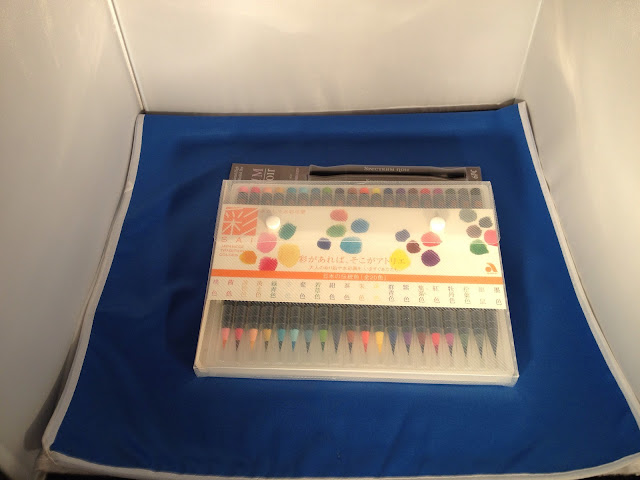 My Akashiya Sai watercolor brush pens were packed in heavy plastic box obviously intended for reuse and storage.  I had hopes that it would somehow transform into an easel, propping my brush pens up into easy reach.  Nope.  No such luck for me. 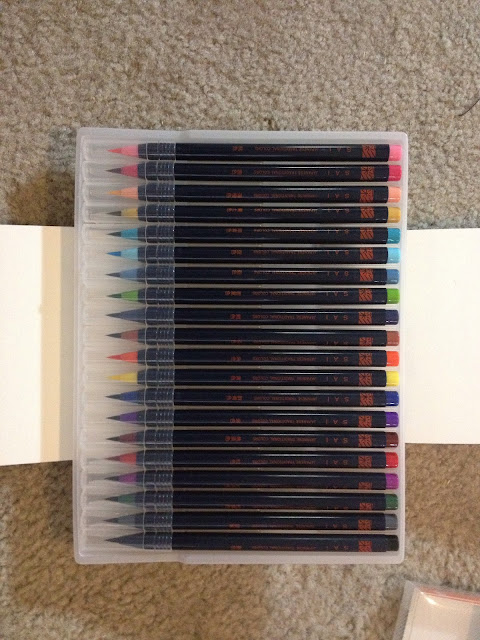 I quickly removed my precious brush pens from their protective case, and marveled at how darn stylish they looked, all neatly lined up.  The color names were written in kanji, which I can't read a lick of, but that didn't matter, as the brilliant colors at the end of the barrel said it all. 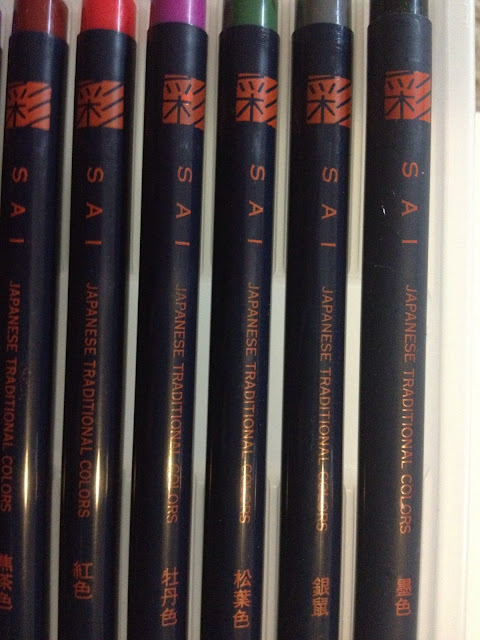 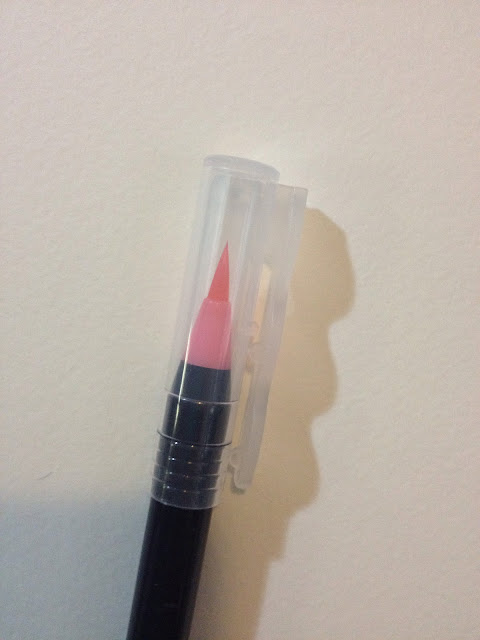 The caps had a clip, and spoke of sunny days at the park, doing watercolor sketches.  Easily.  Painlessly.  Spill free.  I could just clip my selected colors onto my sketchbook and head out, no need to take the pack.  The other colors don't need to know.  And when Akashiya says 'brush pen', they mean it.  Each watercolor brush pen had a brush with individual nylon bristles, although they seemed a bit short.  Other brands of watercolor brush pens like Pentel and Bienfang have soft, squeezable barrels that allow you to increase the ink flow, but Akashiya Sai brush pens are solid and un-squeezable. 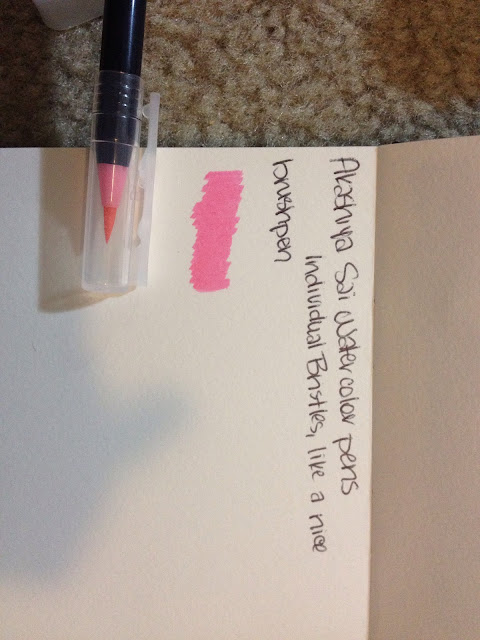 I couldn't wait to begin color swatching.  I pulled out my Moleskin watercolor sketchbook, my de-facto swatch book and a stylish reference useful for color selection, and began to lay brush pen to paper.

Unfortunately, the Akashiya Sai watercolor brush pen was not as generous with it's contents as I had hoped.  The pigment was brilliant, however, and I hoped a quick pass with water would give me all the dilution I needed. 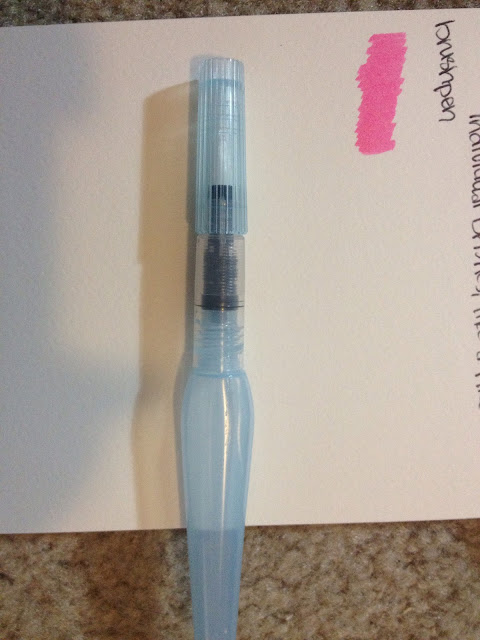 To mimic the rigors of the field, I grabbed a water brush, my most likely choice for a field excursion with Akashiya Sai watercolor brush pens.  Loaded with water, it was ready to lay down a wash at a moment's notice. 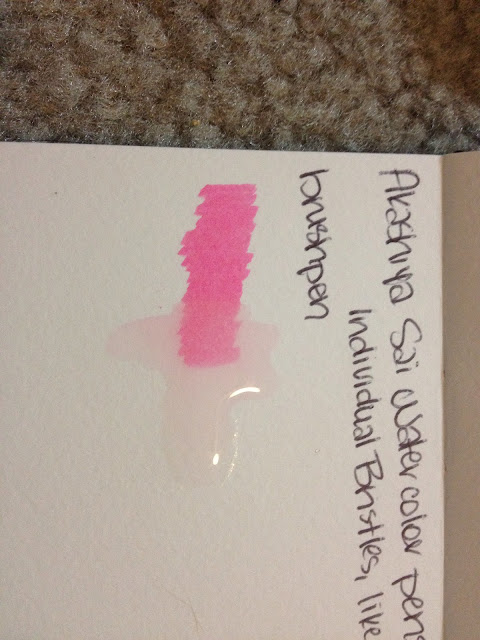 And I began to scrub.  Unfortunately, the Sai wasn't going to be diluted so easily, so I tried a different angle. 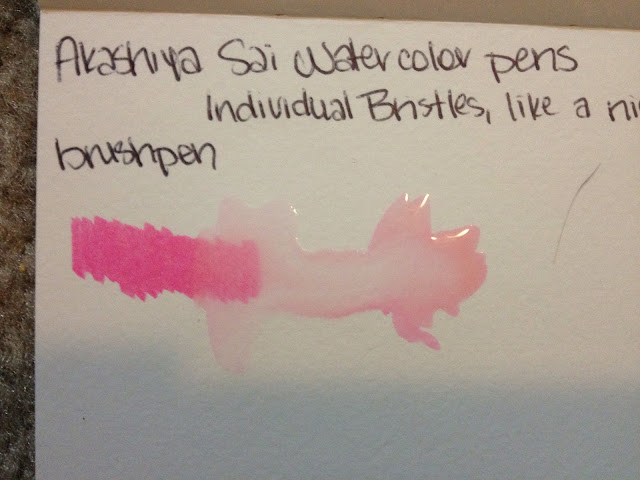 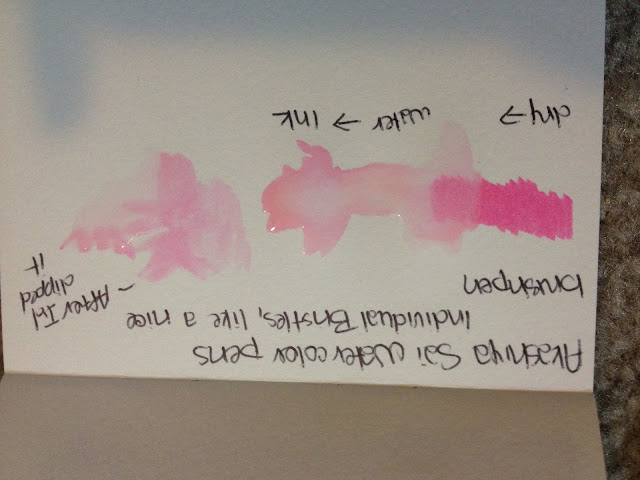 I tried to scrub the water out, and get back to the intense pigment, but to no avail, my Sai was sulking.    This would cause a lot of limitation while working in the field.  If I can't get the color to properly dilute by adding water after ink application, and adding ink to the water ruins the brush, it would be very hard to mimic actual watercolor effects. 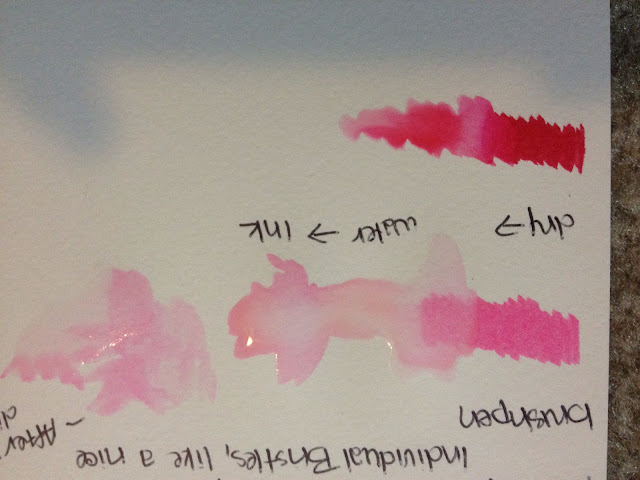 Fortunately, subsequent colors required a little less coaxing.  All the colors in this set have different levels of dilution, which is problematic in that it's hard to predict how well colors will dilute. 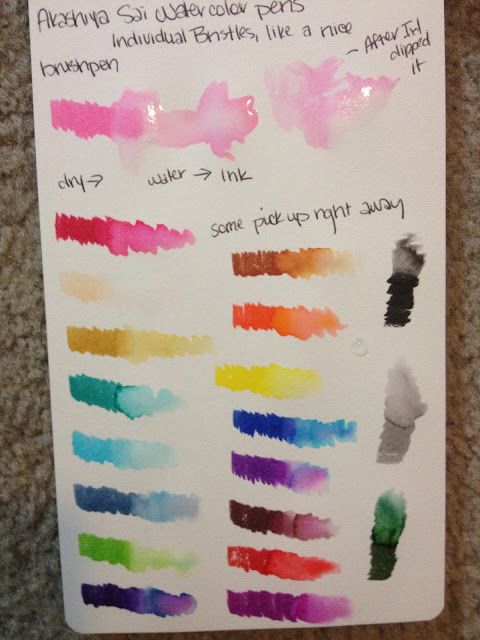 Many of the colors picked up and blended with the water right away, and none were so stubborn as that pink.  Unfortunately, many of the pigments separated into their respective original colors, making the Sai colors not quite true.  As watercolors, I found the Sai watercolor brush pens to be very disappointing, but I wasn't going to give up just yet.  I decided to take them for a field test. 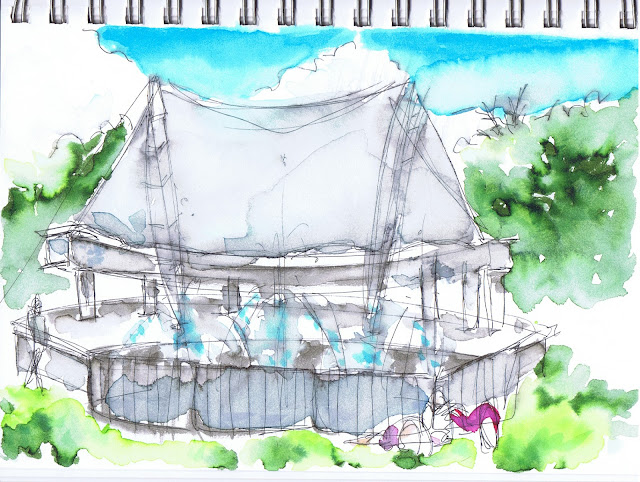 I made several mistakes with this field test of Forsythe Park's amphitheatre.  I used a Hi-Tec C to outline my sketch, and uh, Hi-Tec C isn't water safe by any means.  It bled everywhere.  Secondly, my water brush was a bit too eager to give up it's load, over saturating the paper quickly.  Thirdly, I used my small mixed media sketchbook (90lb), which isn't actually watercolor paper, so the water may have just sat on top.

While the Akashiya were capable of some interesting effects, they were difficult to control, and the sketch fast became a mess.  The short nylon bristles weren't really capable of mimicing real watercolor brushes, and the ink flow ran on the dry side.

Still, I saw potential in Akashiya's watercolor brush pens, and decided to run one last test.  How would these brush pens handle the addition of a little rubbing alcohol, a technique common in traditional watercolor? 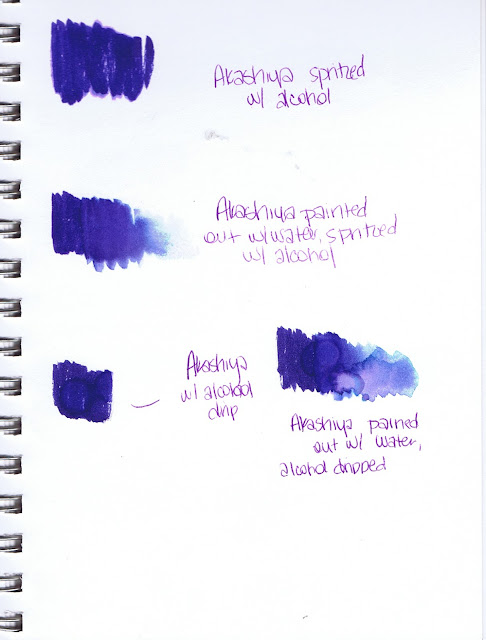 The effects were not impressive.  The ink was just not wet enough to really react to the watercolor, and since the barrel is hard plastic, there's no way to increase the ink flow.

My verdict on this test?  Akashiya Sai watercolor brush pens are disconcertingly similar to Crayola waterbased markers.  Pigments separate with the addition of water, the ink itself isn't juicy enough, and they just don't feel like a professional art tool.  If you're thinking about trying Akashiya Sai watercolor brush pens yourself, I would recommend trying them out individually or buying only a single season's set, rather than dropping $70 for all 20 brushpens.

Granted, it may also be my method of application that causes problems.  I like very light applications of color, slowly built up.  I often avoid saturated or strong colors in favor of greys or pastels.  These brush pens don't work like that.  If you consider them a hybrid of markers and watercolors, you may have better results. Audra, of Nemu Nemu, did a review, and I think her result is much nicer than mine, and she's much more positive about these brush pens.  I think this is an excellent example of how different artists' aesthetics and process can lead to very different results.  This is why, when purchasing art supplies, you should read a variety of reviews from a variety of artists.  By the way, if you aren't familiar with Nemu Nemu, or the attached blog, you should really check BOTH out!
Email Post
Labels: Akashiya Review Sai watercolor watercolor marker watercolor pen