A Little on Rejection 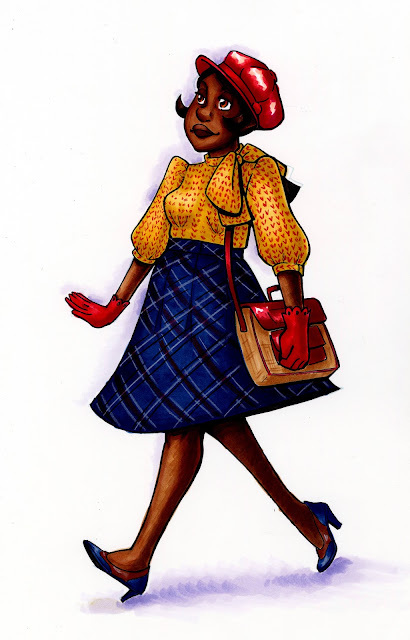 I try to push myself to try new things and accept new challenges.  This piece was no exception, so I was disappointed when a form-letter notified me I hadn't made the cut.  All artists deal with rejection but many don't share because it's embarrassing and may come off as unprofessional. So I decided to share my story in an effort to paint a more complete picture of the artist's journey.

I struggle between accepting myself as being 'good enough' as an artist and outright hating myself and wanting to crawl under a rock and hide.  Modcloth recently had a design contest, and I thought I'd throw my hat into the ring even though I was busy with convention preparation and am not trained in fashion.  I spent a fair amount of time on this, and thought it was good, but received a generic rejection informing me that I wouldn't even make it to the voting round.  The letter was so impersonal that it said 'entry(s)' instead of 'entry'.  Unfortunately, I've grown used to critique so this took me by surprise.  I have no problem with rejection, in fact I'm thrilled editors will take the time to assess me, but I can't stand not knowing why and how I can improve.

Modcloth arguably didn't do anything wrong, yet I asked myself if there was anything I should try to salvage the situation. I debated writing an email requesting their criteria for judging so I could better tailor my next attempt, but decided against it, as:

I'm sharing this with you guys not to complain, but because people don't talk about rejection.  They write about successes, about jobs they hope to have, but they gloss over being told they didn't make the cut.  I have low expectations from the lack of response from the anthologies I've approached , and for a long time shirked away from applying to any jobs until I was 'good enough', but that's another story.  I recently read a blog post I've misplaced about making it a goal to receive 100 'no's' this year, and if being ignored counts, I am well on my way.  That doesn't mean I've given up.  I'll get those 100 no's yet.

I've learned a lot this year, knowledge that extends beyond composition and color.  I'm slowly learning how to deal with people, what people not to deal with, and how to put my pride aside and take a chance.  I am constantly watching girls who are less technically proficient than I am at drawing succeed. Partially because they are charismatic and partially because they refuse to take 'no' for an answer.  Like so many other aspiring artists, I too wonder when my break will come. When I'll be worthy of a personal rejection that requires face-time. When the anthologies I take the time to apply to can take the time to write me an email telling me they're all full, or I'm not what they're looking for, or that I applied too late.  When that day arrives, I can look forward to the day where instead of rejection, I'm told 'maybe', and possibly even the occasional 'yes'.

I face a lot of frustration and battle with depression.  I struggle to keep my head above water, and often fail to see the virtue in what I've done.  I try to be positive for others because that's what I like to see, but occasionally someone I admire admitting they've had a rough day makes me admire them even more.  I've had a rough week this week.  This particular instance isn't the only one, nor is it even an important one, but I feel it's symptomatic of my work so far.  You're going to hear a lot of 'no's' as an artist.  The key is not to believe them.

In more positive news, I've been spending all my spare time preparing for Fluke this weekend.  Fluke's in Athens, GA, and it's a minicomics con.  I'll have a half table there, and lots of fresh, exclusive material.  The week after Fluke is MoCCA, so I'm considering Fluke a bit of a test run, and if I need to reprint things, I'll have a week to do so.

EDIT:
The Make the Cut contest is in it's Facebook voting stage, so if you've friended them on FB, you should mosey over and take a gander at the contestants who have made the cut.  Maybe even vote if you're feeling so inclined.
Email Post
Labels: contest Modcloth rejection