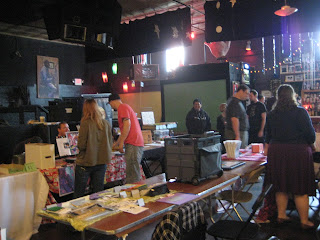 Earlier this week, I posted that I'd be attending FLUKE mini comic convention at the 40 Watt in Athens, GA. I've been preparing for FLUKE and MoCCA festival (next weekend) since mid-March, collecting my mini comics, designing a paper doll set (card-stock version available at MoCCA fest), and ordering new charms so I could offer all new things. Last year, Heidi and Sarah attended FLUKE, and returned singing it's praises. Having never been to a mini comic convention I'd hoped to have similar success this year. Heidi's convention report is here.

FLUKE is a fairly inexpensive convention, it's $15 for a 3'x2' half table and the convention itself is hosted by the 40 Watt bar. We stayed in the nearby Holiday Inn Express, which was 60$ a night split between three people, and it's a four hour drive from Savannah, GA.

We left Friday afternoon with the intention of attending the SEQA meet up at the Transmetropolitan (a pizza joint). We only popped in for a minute, as I still had stuff to cut out at the hotel room, and everyone was pretty tired.

Setup at the 40 Watt began at 10 Saturday morning. We've been working at getting our individual convention setups more compact, and I've been utilizing a small, rolling suitcase to haul my con stuff. Here's a breakdown of my setup (for the most part) 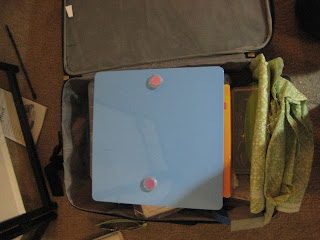 FLUKE was actually pretty disappointing. The crowd was entirely exhibitors and hipsters, and I have found that hipsters are a hard sell so if anyone has advice on how to market to this group it would be most appreciated. There was a lot of interest in the magnetic paper doll, but while people were intrigued they seemed more interested in creating their own for monetary gain. It's not an original idea, and I don't mind sharing what I know, but in this case, it put me off quite a bit. Luckily Sarah drew much of the attention I was unable to with my wares.

For FLUKE, I brought
Unfortunately only my craft items sold rather than what's supposed to be my bread and butter, comic books. 1 copy of the Japan Trip Sketchbook, 1 charm, and several buttons sold. Sarah sold a fair amount of Rascals Rogues and Dames Little Book of Monsters, as it seemed to fit in her body of work better than either mine or Heidi's, but I enjoyed contributing to it. I had success trading Momotaro for other mini comics, and I spent my revenue on other people's comics. 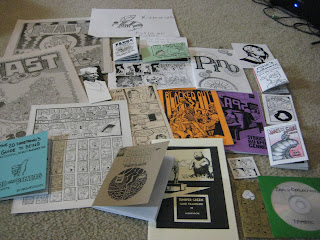 So, do you guys do conventions? If so, which? How do your table setups differ from mine? Do you find conventions to be a successful revenue source, or do you find them disappointing? Any suggestions for me? I feel like I'm running out of audiences to approach. My demographic should be children but am unsure how to reach out to them.

If anyone is interested in purchasing my mini comic books I will be posting information about my online store shortly which accepts credit card, Paypal, and Google Checkout.

Hey! Emi Gennis's FLUKE experience was pretty much the exact opposite of mine! Check out what she has to say.
Email Post
Labels: con review con setup conventions FLUKE