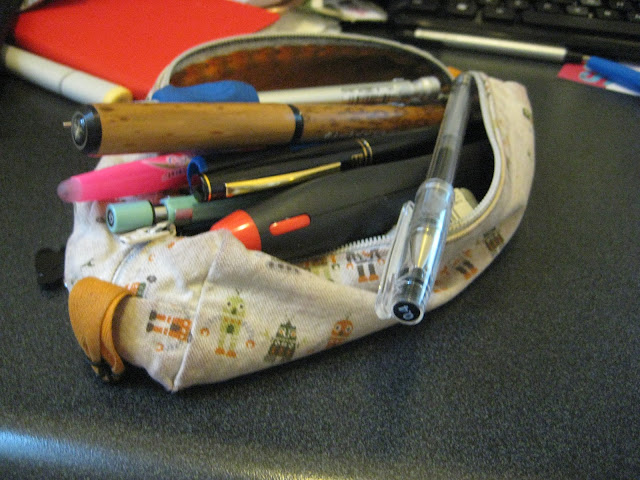 A few months ago, Brad Dowdy of The Pen Addict (a fantastic resource for stationary lovers and artists alike) contacted me about reviewing an Akashiya Natural Bamboo Barrel Brush pen.  I'd already done an abbreviated review of several brush pens, including the Akashiya, but I was more than happy to give it a run for its money.  I'm always excited to play with new art tools, especially Japanese brush pens.

After my last brush pen review tested several Japanese brush pens, I switched from a Pentel Pocket Brush to a Kuretake brush pen filled with Winsor Newton Bombay Ink, and I was fairly satisfied with it.  A habitual abuser of brush pens, I had to replace the splayed out brush tip, and though the pen felt a bit light for a metal brush pen, I enjoyed the preciseness of it's fine brush tip, especially compared to the relative coarseness of the Pocket Brush.  I prefer not to use felt tipped brush pens (with exception of fude style pens) as they lose their snap quickly and produce mushy lines.  After I received my Akashiya, I decided to put it through the same trials that I put my Kuretake through, and it entered regular rotation in my pencil case.

I've used the Akashiya every day since its joined my regular sketching ranks.  It has a more substantial feel than the Kuretake, but does not feel heavy, and it has a nice balance.  The pen itself is slightly longer than most commercial brush-pens, and may not fit in all pencil cases (which is what initially turned me off to it) and may be a little pricey to those used to using a Pentel Pocket Brush.  I feel like the Akashiya beats both the Kuretake and the Pentel Pocket Brush for continual use, and like the Kuretake, replacement brush tips are available.

I haven't been particularly choosy about what I've inked on, I've used this pen with equal success on sketchbook paper (not even the good stuff, Strathmore 300 series yellow cover sketchbooks) and Strathmore 500 series plate finish Bristol with near equal results.  I'm not a fan of drybrushing, so I don't utilize it in my work, and I don't recommend it with this pen, as to achieve this affect, you risk ruining a nice brush pen.  The standard ink can get a bit bleedy, and if you've a wobbly inking hand, the line can get out of control, but that's the fault of the artist, not the pen itself. This pen and a disposable Kuretake fude pen have all but replaced my Multiliner technical pens for my inking needs.

I've abused the brush tip on this pen almost as much as I abused my Kuretake (I am rough on brush pens), so a new tip may be in order.  I am not fond of the standard ink that comes with it, but I haven't yet found it necessary to refill the cartridges with my own ink (though that is fast approaching, and I will let you guys know how that endeavor turns out).

All in all, I highly recommend this brush pen, and my only concerns are that the cap presents an opportunity to ruin the brush, so please be careful when recapping. You also cannot store the cap on the back of the pen, so it may be cumbersome for on-the-go sketching.
Email Post
Labels: Akashiya brush-pen Akashiya Review brush-pen review Japanese art supplies Japanese brush-pen review Kuretake Brush-pen