In Part 1 of this series, we discussed basic color correcting and color editing for watercolor comics.  In Part 2, we talked about resizing elements on a traditional media watercolor page, and how to add shadows or correct tone.  In today's post, we're going to talk about lettering and ballooning on traditional art digitally in a way that preserves the gestalt of the page.
This is a topic I've talked about a few times on this blog, so at the bottom of the post I'll include more links and information on lettering!
It's important to me that the text look like it was handlettered and part of the page, so I use several resources to help make that happen.  I have a custom Kara font based off an alphabet I created in color pencil, I use a scan of Montval watercolor paper for the correct texture, and I rely on the Clone and Stamp to create the body of the word balloon.  Last, I create a border around spoken word balloons using a custom color pencil brush.
In the end, I have a finished page that looks like it was painted traditionally from start to finish. 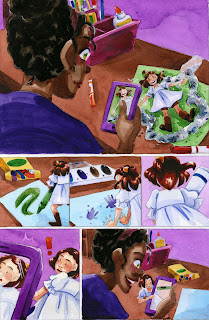 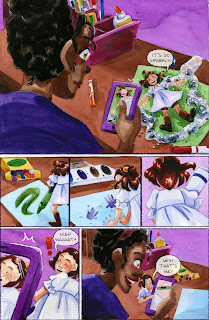 Left: Original scan.  Right: Color corrected, lettered scan.
As of now, there isn't an elegant way to thread Tweets on Blogger, so I hope you guys will bear with me.  I want to archive these tutorials in a way that's easier for casual readers to find.  I recommend you click through to the thread- images are larger and easier to understand.
Creating Word Balloons
Thread readable here

I'm doing balloons today, and thought I'd walk yall through my process! Many people assume my pages are traditionally ballooned and lettered, but nope! All digital! So I'm starting with a lettered page- I may adjust placement, but most of the text is on the page. pic.twitter.com/2xS7OqfPjs

Using the clone stamp tool, I select a sample from a scan of Canson Montval watercolor paper. This is the same paper I use to paint my pages, so the texture and size match. I create a new layer under the text, and begin applying the clone tool with a plain round brush. pic.twitter.com/etdkPZNtrf

For RIGHT NOW, I'm focusing on placement of text, placement of balloons, text corrections, ect, so I'm just doing the balloons right now, not tails or borders- that'll be another Twitter thread. RN I'm aiming for round, but not perfect, with a nice boarder of balloon around text pic.twitter.com/eMqLhvSX4w

Every piece of text gets a balloon on a unique layer, so everything is easily adjustable at this point. I adjust for flow, and often edit or add dialogue at this stage. For the balloons, I aim for mostly round (no submarines), with at least a half letter of space around the text. pic.twitter.com/KoX2Pt2kgI

I begin my next stage of ballooning by getting my balloons into organized folders. Later, I'm going to add layer affects to them, and it's easier to do it by the folder rather than to individual layers. pic.twitter.com/4OHWIpDTvV

For this part of our balloons, we're going to want to use the clone tool a round with pressure sensitivity on, in order to make the tails. Our source for the clone is the Canson Montval scan. pic.twitter.com/p2d74edL5U

This part is really easy- there are loads of ways to do balloon tails, so HOW you do it is up to you and the needs of your comic, but I try to always aim the tail toward's the speaker's mouth. pic.twitter.com/BD5BceGpre

In panels like the second example, if you have a balloon coming from an off camera speaker, you can either point the tail towards a representation of them (so we could have had Naomi's hand speaking in this example) or towards the general off camera direction of the speaker. pic.twitter.com/Nt3kae8TuR

So now that the whole page has tails, I'm going to add borders to my balloons. I use a custom 'color pencil' brush, the same as the brush I use for some corrections, and to do page and panel borders. I set the eraser to the same brush. pic.twitter.com/PN8ufIOxZp

So now that all the balloons are bordered, we're almost done with this page. Next, I adjust the opacity on my balloon layers to 80%, and change the balloon borders to Multiply. My goal is to get the text, balloons, and borders to be part of the gestalt of the page. pic.twitter.com/Px82mB2gAh

So when you're placing balloons/tails, I recommend you avoid crossing or covering important storytelling elements or faces with the balloons and tails. pic.twitter.com/YjyWZ340ou

Also, I try to do it infrequently, but I do utilize colored balloon borders when then opportunity calls for it. pic.twitter.com/tqBbvMujIY

So for the rest of this chapter, it's pretty much just proceeding the same way. I hope you guys enjoyed my lettering/balloons/borders demonstration! Artnerds on my Patreon (https://t.co/xm86dXBIb2) have access to my watercolor paper scans as well as to the brushes I use! pic.twitter.com/0PgxCPFOnY 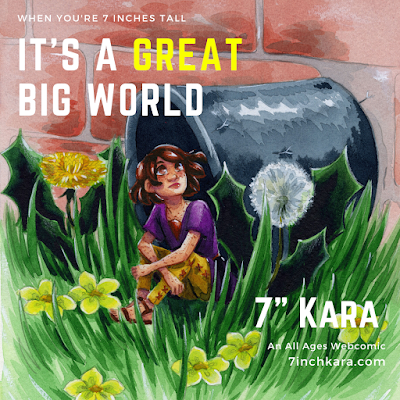 This is part one of a four part series on digitizing, correcting, and lettering watercolor comic pages!  If you're interested in more about the digital side of my watercolor art, please let me know- I'm happy to create more tutorials that showcase that side of the process.  If you enjoy my art, we're preparing to launch the Kickstarter for Volume 2 of 7" Kara!  Almost all of the art in this watercolor correction series is from Volume 2.  If you Follow us on Kickstarter, Kickstarter will let you know when the project has launched!  And if you're interested in learning more about 7" Kara, I have a mailing list that talks about 7" Kara in depth.
More on Lettering and Creating Word Balloons
Intro to Comic Craft: Selecting a Font
Intro to Comic Craft: Placing Text Digitally
Intro to Comic Craft: Text Balloons
Email Post