September 14th and 15th marked the 25th anniversary of the Small Press Expo in Bethesda, Maryland, and the first time in six years I've won the SPX lotto and was allowed to purchase a table.

My friend and fellow comic artist Kabocha and I both put in for tables, and I was the lucky winner this year.  We opted to split a full table between the two of us-$200 each.

I've put in for SPX every year since 2013- the last time I tabled with them- and this was the first year I've been able to go back.  I was really excited about the opportunity- I've made it no secret that I feel isolated and stranded in Nashville, TN, and I was hopeful that SPX might provide opportunities to show my work to editors and help me land more paying work.  I was also eager for the chance to see old comic friends and get caught up on buying their comics.

The plan was to fly in to Philadelphia, drive back with Kabocha to Delaware, then drive down to Maryland for SPX on Friday.  We opted to share a hotel room, and drove to Bethesda in Kabocha's car, parking it at the Marriot on Saturday and taking a Lyft in for set up.  On Friday night, tabling artists could pick up badges and attend a Meet and Greet, but we arrived a bit too late to take advantage of that.

What Sold:
Surprisingly, my biggest sellers were wooden charms and mini-prints.  I really thought the original art and 7" Kara Volume 1 would sell decently well at SPX.  I also thought my hand-painted charms would sell well- they used to be quite popular at MTAC, and are one of a kind- but while people admired them, they didn't really move.

While SPX was frequently quite crowded, sales weren't particularly good.  Perhaps that was due to how crowded it was- people didn't spend much time just exploring, as there was usually a crush.  This was an issue in 2013 as well.  The variety in the crowd, as well as those tabling at SPX has really increased since 2013- in 2013 anime and manga influenced art were in the minority, and few customers were looking for comics in that style.  This year I saw many artists with manga influenced art styles, and many attendees with itabags or wearing anime shirts.  I'm really glad to see that the stigma against anime inspired art styles is starting to die down. 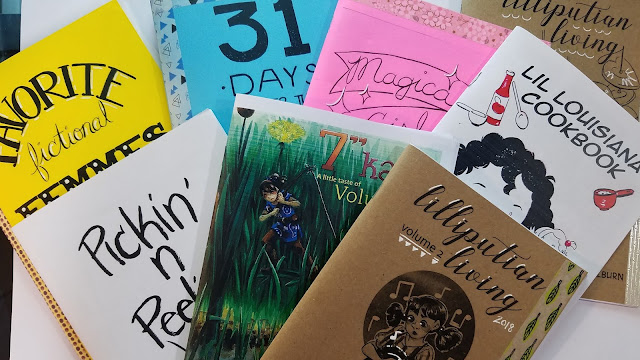 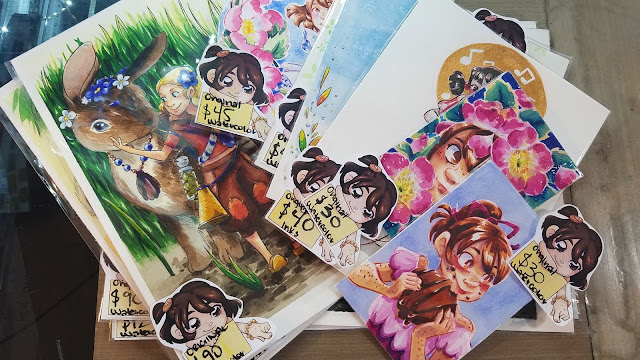 Initially, I was concerned that our placement would be terrible- the map makes it seem like we're at the back of the room.  Our placement wasn't great- we were about midway to the back, at a corner that doubled as an exit, and this placement had it's own issues.  Corner spaces tend to be the worst- multiple people are crammed in the space for one or two people, and ours wasn't an exception.  Our table neighbor at the corner had a large back display that blocked the exit and made conducting sales difficult. 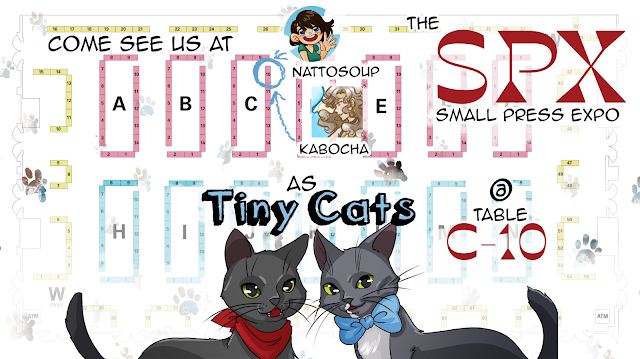 On the plus side, Joseph was able to get a couple great Artist Interviews while at SPX.  Check out his interviews with Caroline Hu and Shoona Browning below, and click through to Youtube to find their social media links!
Caroline Hu- SPX 2019 Artist Interview:

I enjoyed my trip to Delaware and Maryland, but if I hadn't used SPX as an excuse to meet up with a friend from the internet, I think my opinion of this year's SPX might be a bit different.   Sales were disappointingly low for the costs, and while it was lovely getting to meet artists I've admired from afar, I would have liked to see higher sales, and would have preferred to sell more copies of 7" Kara.  I'm also frustrated that I feel like SPX and TCAF are a still necessity for artists who wish to find jobs within the comic industry.  While the internet has gone a long way to open up comics to a wider variety of artists, many editors still cite shows like SPX as the main way to get discovered.  And although I tabled at SPX, and was present at my table for most of the show, I saw few people who identified themselves as editors or publishers.

Right now, the US indie comic scene has quite a problem on its hands- a severe lack of good indie comic conventions for a country the size of the US.  There are 50 states and two territories- there should be 52 decent indie comic cons, if not 104.  Artists shouldn't have to make the pilgrimage to Bethesda every year to jockey to find paying work and impress editors- there should be more opportunities for comic artists to present their work to an audience interested in the material they make.  For artists who live far from comic work epicenters, finding paying work in comics, particularly as an assistant, an intern, or as a flatter is unlikely- but these types of jobs allow new talent to learn on the job and make important connections.

I have never lived in a true comic epicenter.  From Louisiana to Georgia to Tennessee, I was lucky to find comic work remotely when it was available, but those times were few and far between.  Even my time at SCAD hinted at comics isolation-I attended a comics program that could afford to fly in editors, but SCAD was a small oasis of possibility.  Without SCAD faculty benevolence, comic artists in Savannah are just as isolated as comic artists in Louisiana or Mississippi.

Attending SPX, tabling at SPX, is a bit like a drowning swimmer gasping for air.  It's great to be around other comic people, but one weekend isn't enough to survive.  And of course, $225 in income for two days is laughably little compared to time, money, and energy spent to get to SPX.

Those who follow my work here and on Youtube know I try to attend smaller indie comic shows in the south.  From NOCAZfest (now defunct) in New Orleans, LA to Handmade and Bound here in Nashville, I make it a point to put in and table.  Unfortunately, those sorts of events don't attract publisher attention, so while it can be a great way to sell directly to my market, it's not particularly sustainable for me.

So, as I have in the past, I challenge editors and publishers to break out of their comfort zones and attend conventions (with an intent to hire) outside of their normal stomping grounds.  Seek talent from a variety of shows, in a variety of states.  Diversify in new ways, and seek to represent voices from all across the US- not just those conveniently in your backyard.