For those of you who don't know me, I'm Becca Hillburn!  I'm a kidlit comic artist, with a self published comic, 7" Kara, a longrunning art tutorial and process blog, an art education Youtube channel, and I'm a co founder and co contributor to the convention artist resource blog, How to be a Con Artist.  I have almost 10 years of convention experience, and during most of those years I did approximately 6-13 shows per year.  I've lead several Artist Alley 101 panels, I share con reviews and recaps on my channel, and I occasionally teach workshops and classes in the Nashville and New Orleans areas.  I've made comics for over 20 years, I hold a BA in digital art, and an MFA in comics from SCAD.

At conventions, I sell self published comics, original art, hand assembled mini comics and zines, laser cut wooden charms, and I frequently take commissions to fill at the show, or to mail in after.  Over the years, I've honed my craft at selling comics- it can be a bit tricky, but with experience, enthusiasm, and a good product that I really believe in, I feel like I have some valuable insight to share with other comic artists.

Figure out your goal, and then gear your table around that specifically.  For example, my goal is to sell copies of 7" Kara, so the books and promotion of the books takes up half the table space alone.  My signage from price signs to banners feature Kara, most of my original art for sale is of Kara, and many of my mini prints are Kara related.  I have a huge portfolio with original pages taking up a massive amount of table space, but it encourages casual passers by to flip, take a moment, and often sparks interest in people who would just pass by.  This can be extended to selling commissions, or acrylic charms, or fanart- whatever you're most passionate about, whatever's new and exciting to you, or whatever has the best margins.


Utilize your local area, or areas around your family/friends, and REALLY work to develop a name and a presence there.  So many artists assume the only way to make money as an indie comic creator is to table at SPX or TCAF- the big, oft-discussed, over lauded shows, but I find working locally often provides the most rewarding experience.  I get to talk about my comics with people in my local community, promote workshops that I'm presenting through NPL or NEC, and possibly make new friends and contacts.  Staying local is much more affordable than traveling for cons, so I can have a lower threshold for profit, and having an active presence encourages other artists in Nashville to create comics, and table at local shows.

I  think con culture online, like "everyone has to go to TCAF", "Everyone has to go to AX" creates a really toxic idea that the only cons that are worthwhile are the big, expensive travel shows, and that's definitely not the case.  I've done my best sales here in Nashville, which is certainly not a comics or anime capital by any means, but people love the idea of supporting a local artist.  That said, I would love to encourage some of my artist friends to join me at a few of my favorite hidden gem shows, and I would adore collective table sharing at some of these events.

Don't try to keep up with other artists in terms of merchandise, make merchandise that reflects your tastes, and the products you're selling.  I have a rule that I only make the sort of merchandise I would purchase for myself.  This means very limited prints, a focus on comics and minis, and A LOT of original art, but it also means every product I create is something I care about and am invested in, and it reduces the amount of same product competition with other artists.

Promote Before You Go! Utilize social media outlets you already frequent- so if you use Instagram, show examples of your products leading up to the show, create a graphic with a site map and basic information (name of show, location, ticket price, days) 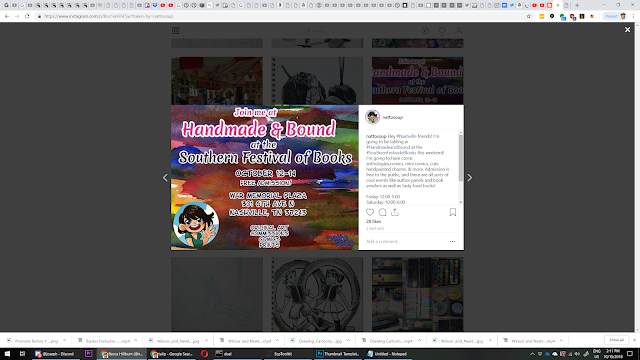 Promote while You're There! 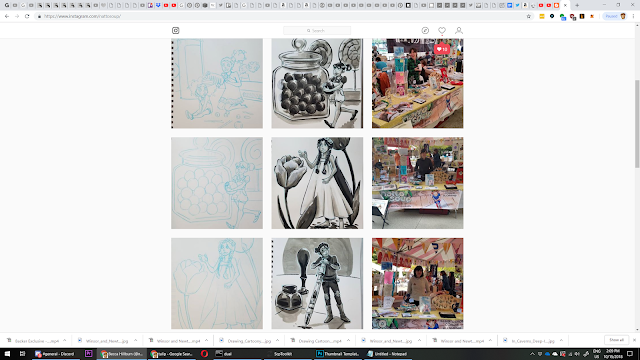 Check out other artists' displays for inspiration, but don't rip them off.

Have a Goal Besides A Sales Quota.  Besides engaging customers about my products, and talking about 7" Kara, I focus on promoting my educational Youtube channel, my comic as a webcomic, and my services as a teacher, as well as any classes I may be presenting in the near future in that area.  I also run a promotion, depending on the show and how busy I am, where if an attendee can prove they're a subscriber to my channel, they get to select a free sticker.

Have a few freebies, but keep them in a central location.

Have lower priced items on the table, for children, people with limited funds, or those who wish to buy something from everyone at the show.

If you wish to drive online engagement and increase your follower counts online, find a way to incentivize that at the show.  For example, I am trying to grow my Youtube channel's audience.  I frequently ask customers if they are artists, or are interested in learning more about art, and if the answer is affirmative, I show them the back of my postcard, and explain that my Youtube Channel has drawing, marker, and watercolor tutorials, and that I also review art supplies.  Depending on the mood, I may then mention that I'm running a special promotion where if they can show me they're a subscriber, they can pick a free sticker.  Frequently, people will immediately reach for their phones to subscribe and claim their sticker.  I always make a big production of it (OK!  NOW PICK YOUR STICK!)

Types of Shows I Frequent:

Anime Conventions
Almost entirely in the South, mainly in Alabama, Louisiana, and Tennessee

What I Sell:
Commissions- at con and mail in.  7" Kara.  Wooden Charms.  Some Originals.  Small handcrafted items such as rings, ribbons, sassy buttons.  Stickers


Professional Shows
This is mainly ALAAC- The American Library Association Annual Conference, a professional conference that offers tables to writers and artists, and travels around the country.  I've tabled twice, and found my second show to be a much better fit.

What I Sell: Stickers. 7" Kara.  Other comic anthologies I've participated in, such as 1001 Knights, or LNA: Eat It Up.  Mini Prints. Original art.  Wooden charms.


Craft Shows
While some craft shows are very specific about not allowing illustrators to participate (TACA, Porter Flea), others are open to a variety of creators.


One Day Events
Free Comic Book Day, many library cons, and some craft shows fall into this category.

For me, anime conventions are where I see the most sales in general, and small library cons are where I see the most 7" Kara or book related sales.  Outdoor, family oriented events such as Southern Festival of Books, or the Nashville Cherry Blossom Festival, can be great opportunities to sell books to families, but are dependent on clement weather.  My online sales have historically been terrible, augmented by the fact that in many ways, I've allowed my online shop to rot this past year.  In a virtual space, I'm not willing or able to really compete with other creators the way I can in physical spaces.

While I wouldn't say cons have been a HUGE conversion for online readers, many of my Patrons first met me at a convention and that's how they found my work. I do pretty well with book sales, especially at small library cons.  The reasons for this vary- It could be the fact that the demographic I create for, which is not really online yet, IS at cons, and their parents are definitely willing to buy them books, but it could also be the fact that I've put in over half a decade of conventions in one area, and really try to go the extra mile in presenting a human face- often offering panels and doing sketchbook/portfolio reviews by request.  I'm also an ambivert who used to be an  extrovert, so I need that human interaction and engagement, and conventions are the only way I get that for my work.  If you don't feel they're worth the investment (table cost, equipment cost, display cost, merch cost, ect), that does not make you less of a comic artist, but I think if you go into them with a clear goal that's reasonable (talk to 100 people, give out all my b-cards, encourage people to add me on Instagram) that isn't necessarily sales oriented, you can often make connections and have interactions you wouldn't have online.  For someone who creates for a younger demographic, this can be huge- many of us are invisible on Twitter, Instagram, and Youtube, and these in-person interactions are vital to our survival as artists.;

It can be REALLY hard to make sales without fanart on the table- fanart brings people in, and gives them a reason to engage you over your work.  If you look at my con recaps, you'll see my table is MOSTLY original art, merchandise, and comics but I do have fanart pieces that rotate, and it's usually the fanart that gets new fans over, and new people commissioning my work.  I know many comic people have adverse feelings towards selling fanart, and I respect that, but it really made a difference in my sales.  My compromise is to only make fanart for series that I'm actually a fan of, or that have inspired my work in some meaningful way.  This allows me to not only attract people who might enjoy my comic, but have fun, interesting conversations with fellow fans.  I also limit my fanart to original pieces or to small 4"x6" or 4"x4" mini  prints so it does not dominate my table or display.

Conventions are a long game, and are always a work in progress.  My first year of tabling was really rough, and entirely a learning experience.  I didn't break $500 until three years in (and this was 13 shows a year), then the next year I broke $1,000.  Now I hover around $1.5, sometimes below, sometimes above, depending on the type of show..  Every three years, the batch of 15 year olds with money to spend has cycled out, so every three years I basically have to train a new audience to buy commissions.  However, there's information available online to help people start tabling, and that wasn't the case when I started, so I feel people newer to conventions have a head start.

I really enjoy doing shows, particularly library shows such as A2CAF, local shows such as MTAC, and family oriented shows such as the Cherry Blossom Festival.  I love meeting new people, I adore talking about comics, and I enjoy helping other artists get their start in comics, with art supplies, or at conventions.  I want my legacy as an artist to be that I was kind, energetic, passionate, and a fierce defender of comics for kids, and I feel that conventions help me stand out in a sea of other artists with similar hopes and dreams.  I do find conventions to be exhausting- a lot of prep before, and a long recovery period that I can ill afford, and I hope to someday strike a balance that allows me to earn a living as a teaching artist and comic artist.