Skip to main content
Labels
Posted by Becca Hillburn May 22, 2017 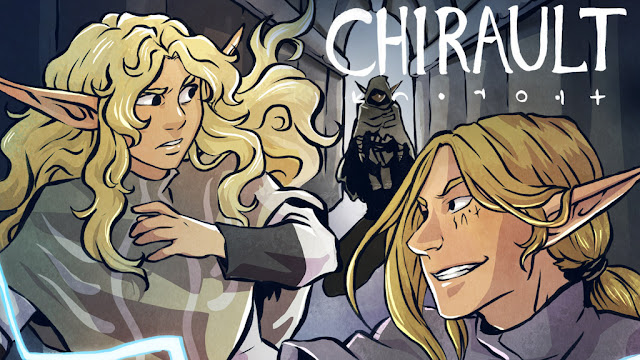 Hello! My name is Ally Rom Colthoff and for the last 10 years I’ve been working on a webcomic called Chirault-- a high fantasy adventure story with lots of magic and monster battles. I’m currently in the process of bringing the third collected volume of the story in the print (there’s a Kickstarter running here for anyone interested), and it’s been an interesting path making sure the pages are ready.


At the time I started, I had no notion of eventually printing it; the story was meant to be a fast practice run for ‘something bigger’ (lol), but it quickly took on a life of its own as I became attached to the characters and world. Seven years after first launching it, after some interest from my readers and the arrival of Kickstarter as a fundraising tool, I decided to try taking it to print… but those early pages desperately needed to be updated. 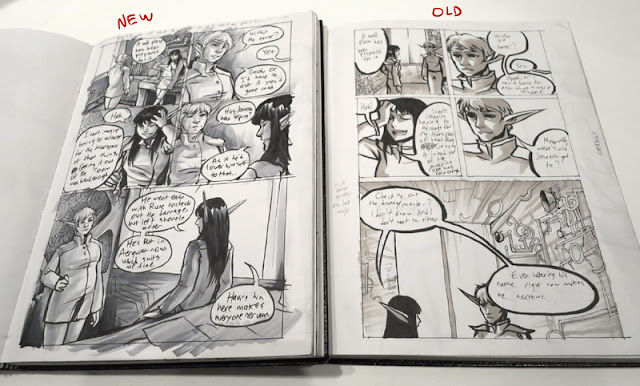 
There are four major issues that tend to hit webcomic artists bringing their work to print; this article will cover the ones that affected me in particular, and how I dealt with them.


I will disclaim that for the processes I outline below, I use Adobe Photoshop CS5. The steps may be replicable in other software such as Clip Studio, but for this article I’ll be sticking to my own approach, which is admittedly idiosyncratic. This article is also dealing with how to retro-fit an existing body of work for print, rather than how to make it compatible from the outset-- really, on my next project I’m going to do my best to make sure I compensate for these things BEFORE I start work on my pages, which will save me a lot of work going forward. There are almost certainly more efficient ways to streamline the process that I haven’t discovered yet, so I welcome input on it! I hope that by writing about the issues I faced, I can help others who may end up dealing with similar ones.


My comic is monochromatic and mostly neutral earth-tones, which are easy to convert, so that wasn’t an aspect that gave me trouble. The conversion process is a concern for most digital artists, so I’ll link to a couple of articles: here’s one by Print Ninja outlining the basics of colour conversion and giving some tips, and here’s another by Christianne Goudreau with some more advanced advice on optimizing digital artwork for print.


I also managed to dodge problems with resolution (that is, the pixels per inch and size of the files), in large part because as my comic is illustrated traditionally and then scanned in; my pages were already at 300DPI. Saving pages at low-res is an unfortunately common issue for a lot of digital web-cartoonists working on their first comic; for this reason, even for artists who have no intention of bringing their story to print, I strongly encourage everyone to draw their pages at 300DPI. If you change your mind later, you won’t want to yell at your past self!


...Well, that’s a lie, I still wanted to yell at my past self sometimes too for the potholes I DID step into. Here’s what I faced: 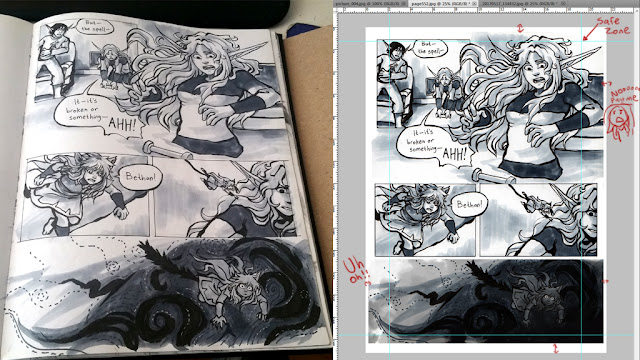 photo of open sketchbook with bleed page, beside a PS screencap with guides


I made a very basic error when drawing my early pages: I didn’t keep my page margins (the amount of white space between the edge of my panels and the edge of the page) consistent from page to page. Not only that, but the shape the panels took up slowly morphed over time; initially I had wide white margins on both sides, but as I drew them in an 8x11 sketchbook the panel borders slowly expanded until by page 400 I was using more horizontal space.

two pages side by side, and then overlaid at 50% opacity


I did not want to redraw all of the pages (as there are over 1000 pages total in the story that would be a monumental task), but I did have to find a way to balance the pages so that they were consistent. So the first step was to choose the dimensions that the physical book would be printed at.


I ended up going with 6”x8”; a nonstandard (but roughly manga-sized) book that could accommodate both my narrowest and my widest pages without looking too unbalanced. With that in mind, knowing the exact pixel dimensions my files needed to be saved at (2550x3500 pixels, to be precise), I created an Action in Photoshop so that I could reproduce the same steps on every single page.


Here are the steps in my Action: 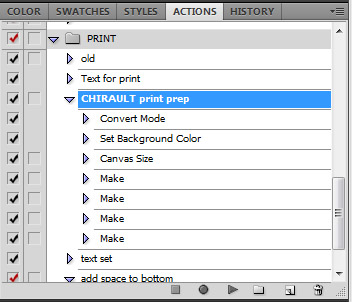 ◾Converting the file to CMYK. As my colours are very neutral and monochromatic, and my scans are a single layer, this was generally the only colour-related step I needed to take. For digitally-coloured artwork, it’s a good idea to flatten the layers before converting-- CMYK will change the way layer blend modes work, particularly Multiply and Overlay layers.


◾Set Background Colour. In this case, it was making sure my background colour was set to white.


◾Canvas Size. I didn’t use Image Size because that will resize the entire image (possibly distorting it vertically or horizontally if the aspect ratio was not already the same as the new dimensions); instead I used Canvas Size, which will extend the edges of the page or crop into it in the event that the new size is smaller. In every case I was adding to the pages, because I hadn’t accounted for Bleed in my working files-- more on that later. The Photoshop Action will remember the exact numbers you plug into the dialogue box, so they’ll all be the same.


◾Make. The 4 ‘Make’ commands refer to creating guides (the blue lines visible in the screencap below)-- these help me make sure my panels are staying a consistent distance from the edge of the page. The area within the guides is known as the Safe Zone-- most comic page printing templates will include some notation on this, and Making Comics has a breakdown of it here. 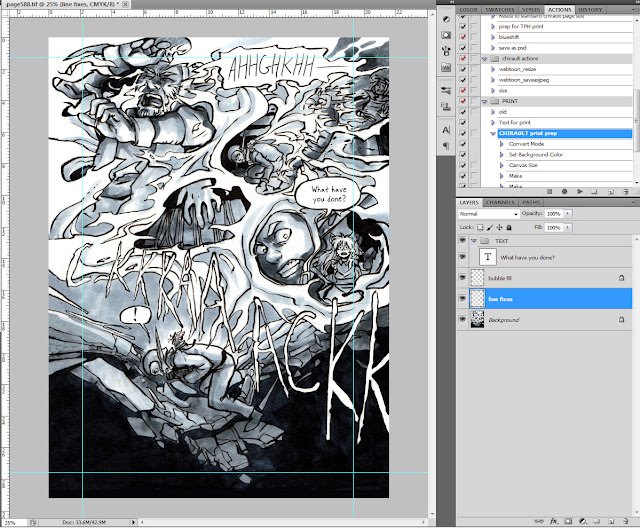 screencap of page with guides


For pages where all the panels are nearly contained and the margins are all left empty, Bleed isn’t a worry; however, I did have a number of sequences with art extending to the edge of the page, and I had to address it there.


My strategy, after the page had been resized with bleed added, was to use the regular brush tool to supplement the lineart or any structure that was needed, and then to fill in the rest with the Clone Brush. Because the art is all traditional, matching the texture and tonality was very important-- so I’d use the Clone Brush on a section close to the blank space and try to match it as seamlessly as possible, to give the impression that it was a continuation of the same art.


Where there was detailed lineart, I created a layer over top and sketched in the extensions of the lineart, as it’s very finnicky trying to continue precise angles or curves with the Clone Brush.

closeup of one of the edges, screencap including the layer structure


It’s a time-consuming and finnicky process to repeat these steps for every page that needs it, but it pays off once the book is in print; inconsistent formatting can be distracting. 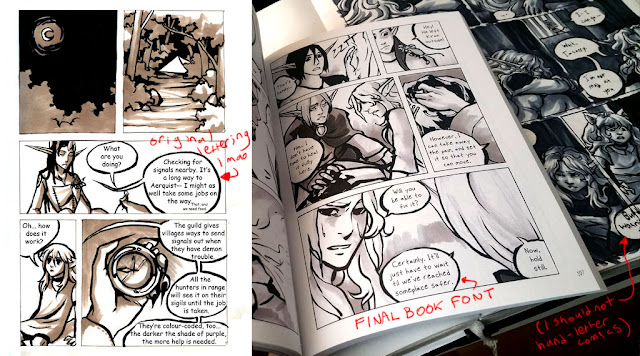 When I started my comic, I didn’t know very much about lettering, and I used Comic Sans for all of the text. A year or two later, I started hanging out more with other webcomic artists, and learned that Comic Sans is terrible, so I found another font and switched to it. Then, I found out how to make a font of my own handwriting, and started using that. And THEN I decided (I thought it was faster, or something) to try to actually really hand-letter right on the page itself-- after 100 pages or so, with decreasing legibility, I switched back to the font based on my handwriting, and that is what stuck.


I wanted the print volume to be as consistent as possible, so of course addressing the inconsistent lettering was one of my first priorities when I started work on Volume 1. I had saved all my original files as flattened JPEGs (do not do this), so updating the lettering required me to access every single page, erase the text, and re-type it in full with the new font. To ensure it was a consistent size across every page, it was important to do this AFTER I had done all the layout steps above, so that the text wouldn’t be scaled in any way.


I had an additional concern with the text: because I had chosen to print with a 4-colour (offset) process instead of a digital process (here is an article explaining the differences between them), I had to ensure that the black colour of my type was True Black rather than Rich Black. This means, if you pull up the colour swatch in the Colour Picker, the CMYK value will be expressed as 0, 0, 0, 100. In other words, it only uses black ink, rather than being built up from all 4 inks.

On the screen true black tends to look a little greyish and can have a reddish tint, but it will print using black ink in the 4-colour process, and so will come out fine on the page. I should note that for people who intend to use a digital printer this step is less important-- thanks to the way the equipment works, the issues that using true black is intended to prevent (notably, a ‘halo’ or fog of ink around text or fine lineart) don’t tend to appear in digital prints. Most artists doing a short run of books (less than 500 copies) will be using a Print-On-Demand service, and those tend to be digital only.


There are other steps to take in printing a book-- using InDesign for layout, adding page numbering, or design basics like creating a cover. But I wanted to cover these two parts of the process, as I haven’t seen many other tutorials talking about these steps.

That’s all for now, thanks for your time! If you’re interested in checking out my books, Chirault’s Volume 3 Kickstarter is live until the 24th of May, and you can buy one or two or all three of the books, as well as a short full-colour minicomic set in the same universe. 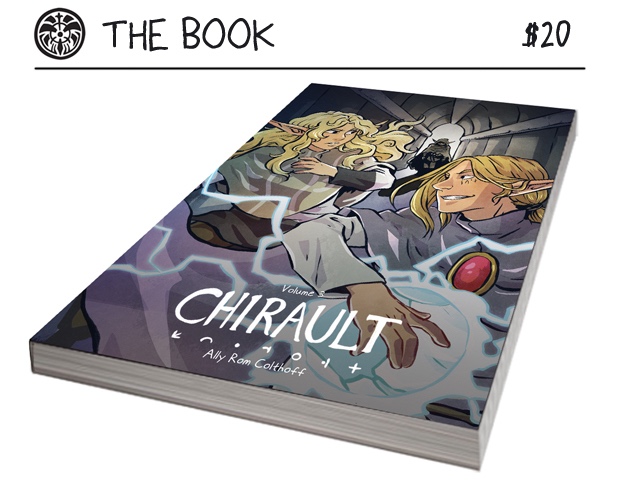 You can also find me on Twitter, Tumblr, or via the Chirault webcomic main page
Email Post
Labels: getting your comic ready for print Kickstarter kickstarter announcement Prepping for print prepping your comic for print