Skip to main content
Labels
Posted by Becca Hillburn May 04, 2017 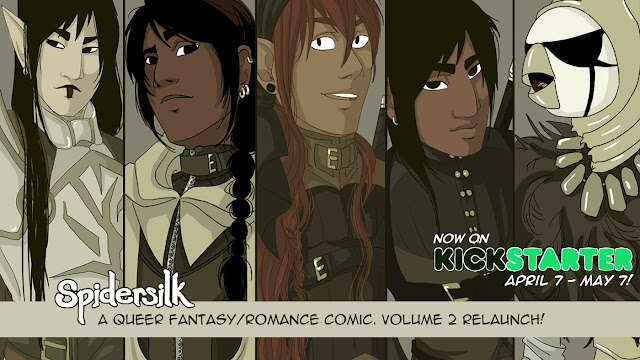 Hi everyone! I’m Alakotila, an illustrator and writer telling stories across a few mediums, including comics, games, and books. Right now my long-form fantasy webcomic, Spidersilk, is Kickstarting for volume 2. Volume 1 was successful last year, and a limited run is still available here, or you can order Volume 1 and 2 together through Kickstarter.  I began Spidersilk in 2011, and there are 20 chapters online- about a third of Spidersilk!

A Bit About Spidersilk

Spidersilk is a fantasy webcomic about an ex-soldier who joins the thieves guild (the Orb Weavers, masquerading as a weaving hall) in a desperate attempt to belong. It’s about finding home, making friends, and accepting yourself. Spidersilk is surprisingly funny and light hearted, while still tackling serious issues.

"Spidersilk is about finding home. Loss, love, isolation, healing, and friendship were things I wanted to explore in this queer fantasy romance."

Spidersilk follows the adventures of Prentice, an out of work ex-soldier (a warrior mage, no less) among thieves- completely out of his element. He'd joined out of desperation, seeking some place to belong. And while he has his strengths, they go largely unnoticed for a time, leaving him feeling frustrated and useless.
In volume 2, missions fail, someone breaches the thieves code, and the early signs of an outside force chipping away at their network appear. The thieves may not have appreciated Prentice's talents at first, but they may find themselves relying on his skills after all, and soon.

Even in this chaos, Prentice believes he's found a place among the Orb Weavers. He has found friends, and perhaps more.
Spidersilk takes place in a world that is post gender identity, where all forms of sexual orientation and identity are considered valid.  While Spidersilk was planned before I moved overseas, I didn't launch it until I was living in Japan. The culture shock and isolation aspects became a lot stronger than planned; however, as I eased into my situation, it seemed that Prentice did as well and his level of comfort and security increased. 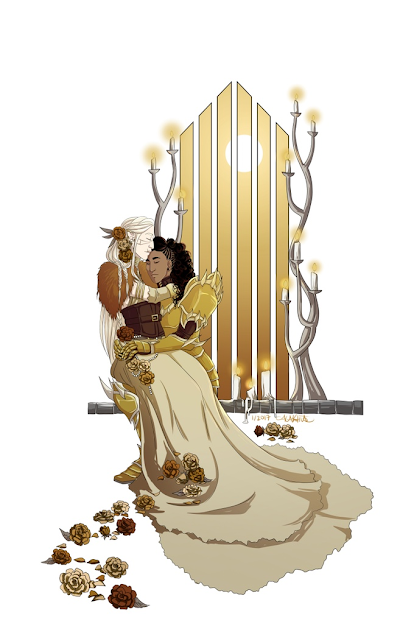 Finding the Right Printer and Printing in Grayscale

What I’m going to talk about today is my experience with not only printing a grayscale comic, but printing in general for the first time. I get compliments from other artists about the grays in Spidersilk, and it was something I wanted to protect in printing. I stumbled around a bit with that, and I’m here to share what I learned. 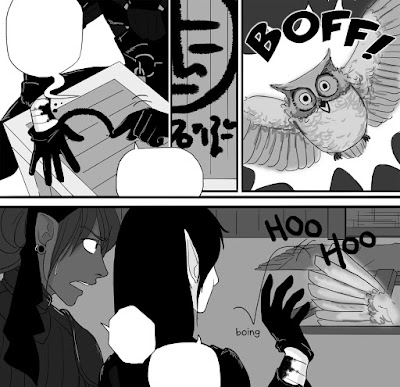 Spidersilk volume 2 is ready for print — that is, if the Kickstarter fulfills! I'm going to share my experiences printing a grayscale comic, but printing in general for the first time. I get compliments from other artists about the grays in Spidersilk, and it was something I wanted to protect in printing. I stumbled around a bit with that, and I’m here to share what I learned. 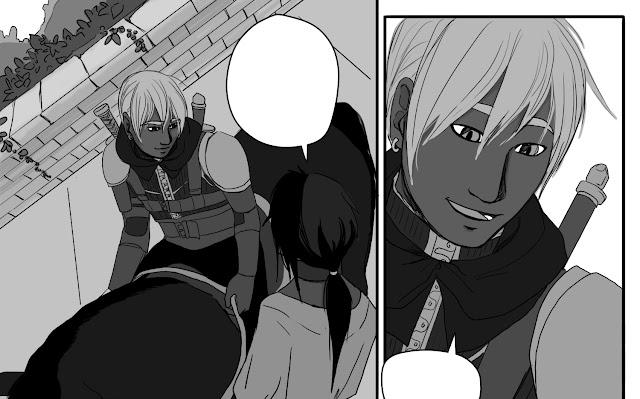 I asked for printer recommendations on twitter though #ComicBookHour and #WebComicChat last year, and two names came up consistently: RA Comics Direct and Print Ninja. Print Ninja has a minimum run of 250, so that was already out of the question. I went with RA Comics because of their phenomenal customer service. Once I ordered my book, they worked with me every step of the way as we battled an infuriating grayscale issue; they understood how important the grays were to me, but we two proof copies in things were looking bleak.


I edit in Clip StudioPaint (CSP) because of, yes, its incredible word balloon tool. I know create comic pages completely with CSP, but this was not the case then. Thing is, when I was opening those PSD files into CSP it was converting to RGB automatically. When I took it back into Photoshop to do the final edits and text, it still saved as an RGB PSD. I suppose I figured since I hadn’t actually changed the colors, this wouldn’t matter in printing. Nope. 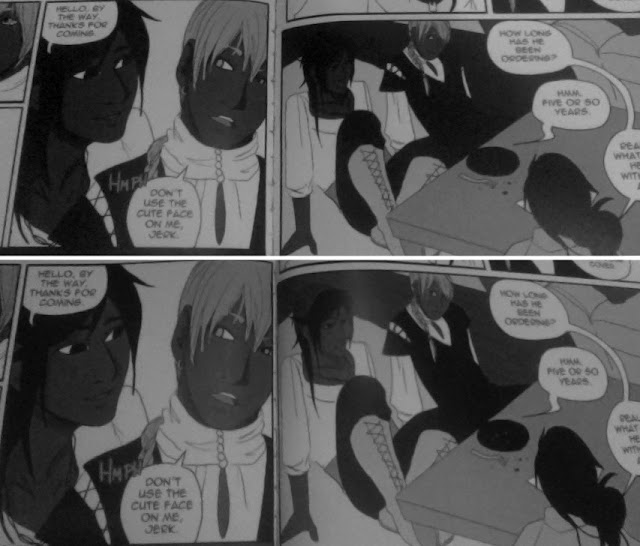 It mattered. I apologize for the graininess of this picture, but my only working camera is my webcam and I wanted to show you just how significant my RGB vs Grayscale copies were. The print quality in volume 1 is much nicer than what is pictured here!


As you can see in that image, characters melted into the background, and the background details were often lost. There were only about six discernible values of gray, and anything too dark became black. Finally, we realized I had to save my PSD files as grayscale before placing them into InDesign; even with the grayscale conversion of the final PDF on their end, something about those initial RGB PSD files was throwing the whole process off. So while I did have to convert every PSD one by one to grayscale, at least I didn’t have to sort through layers and layers of messy grays, since I really had no concept of printing when I began this comic. All 176 pages went through this.


After we figured out that grayscale problem, my next proof was sent. I approved it and had my comics in days. That’s another thing about RA Comics Direct — they are very, very fast. They also have a wide selection of paper quality and binding, and also offer neat things like lunch boxes, posters, and banners. However, printing small runs with them is pricey.


So now I am left with the decision of continuing to print with RA Comics, since I can’t guarantee the comics will look the same if printed elsewhere, or wind up printing the rest of the series (hopefully) with a new printer. For an indie webcomic artist trying to print their comic, if you’re spending as much money as I was per book with RA Comics, it’s more of a vanity project than anything.  It was time to find someone who could offer a better rate.
Another printer came to mind when I began looking up printers this time around: Keness. I didn’t know anyone last year who had printed with them so this took a bit of google-image searching to dig up who was using Keness and gauging customer satisfaction. Results were good. They responded to my initial questions on preparing for print. And a friend of mine (Love Debut, by Nika.) recently got her comics in from Keness, and they look great! 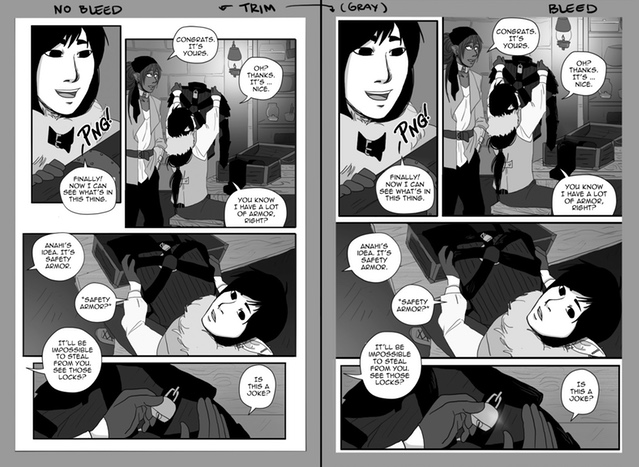 On the image above, the left side is prepping for Keness; the right side is prepping for RA Comics Direct. If you can, not only determine your comic size early, but who you are printing with. Even the trim was different between these two printers. Doing away with the full bleed was not necessary, but I feel it will make the process easier with Keness.


Keness also prints in CMYK, which means I need to learn a new pre-press print method that includes “backing blacks,” which is information I got from “Let’s Print A Comic” PDF from Iron Circus Comics. (I recommend getting it before you decide to make a comic for print!) My next step is to have grayscale Spidersilk pages converted to CMYK and see how the looks. Otherwise, I will be going with RA Comics again to preserve those grays.


In closing, don’t be afraid to shop around for printers! What suits you may not suit someone else, but it is always a good idea to get recommendations from artists you trust, especially if they’ve had to deal with the same issues (tones, grayscale, spot color, etc).
I promise I'll check in again once Volume 2 has been printed by Keness, and let you know how it stacks up against RA. 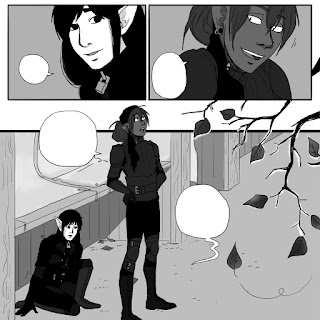 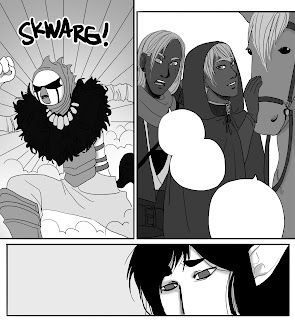 And please check out Spidersilk volume 2 if you’d like to support queer indie comics, fun fantasy comics, and webcomics in general! Spidersilk is available on the Spidersilk site (part of the Ink Drop Cafe community!)  tapastic, and webtoons. 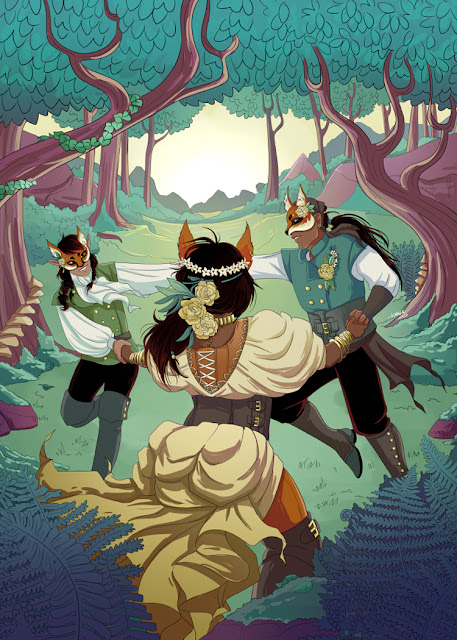 It wouldn't be a Kickstarter if there weren't some bonus goodies in the mix!  Rewards include a digital wallpaper for fans of the comic who just want to show support, digital downloads of Volume 1 and 2, physical copies of the book, and incredibly cute acrylic charms. 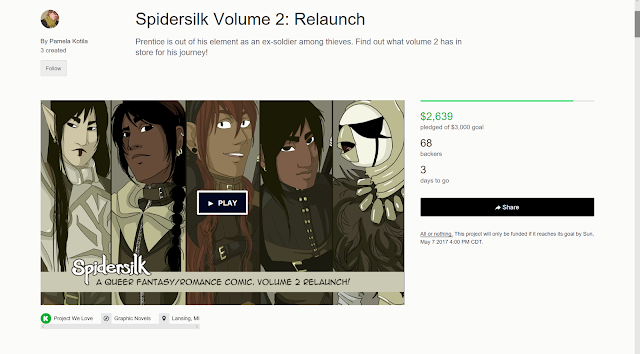 With only 2 days left, and a little over $300 left to go, help Spidersilk Volume 2 see print by checking out Alakotila's Kickstarter.  Whether your're an old fan and just want to pick up Volume 2, or a new fan and want to grab both volumes, Spidersilk is definitely checking out!  When I realized Alakotila was offering a commission tier, I had to up my pledge!  I can't wait to see how cute Kara looks in armor!