I've been pretty busy lately--still moving in and settling into my new studio, working on projects, preparing for con season, and I've felt pretty bad about not posting in awhile.  While I won't be able to resume my old update schedule for awhile, I didn't want to leave you guys hanging, so here's a little mini review written at a ghastly hour.

I received a teal Marvy LePen in my last Art Snacks box, and squirreled it away in my purse for later doodling and testing.  I just rediscovered it among the gum wrappers and ancient Advil, and fished it out for a quick spin in the old sketchbook. 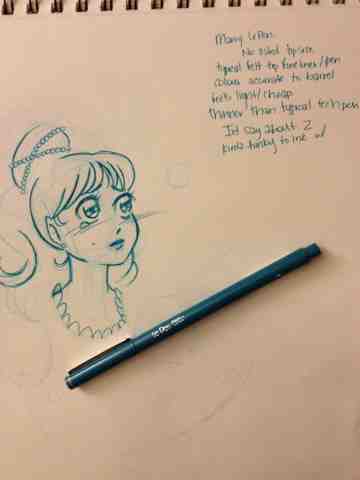 Because the LePen was included in an Art Snacks box, I'm going to review it as an art tool and not as a writing tool.

The LePen has many drawbacks which make it a less ideal inking choice out of available technical pens.  It's very light weight, which is probably great for writing, but even with my small hands, I found it too light and thin to balance properly, and I had issues with gripping it.  The LePen doesn't come with a marked size (it's probably only available in one), but I'd guess it's the same size as a .2 or .3 Copic Multiliner.  Generally, the LePen feels cheap. 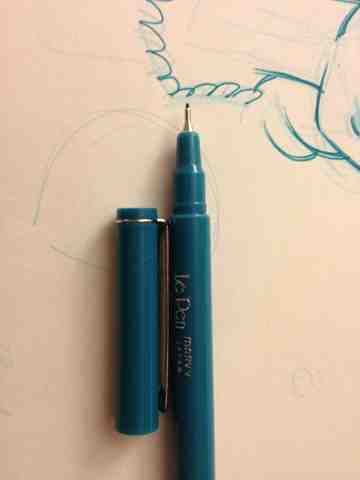 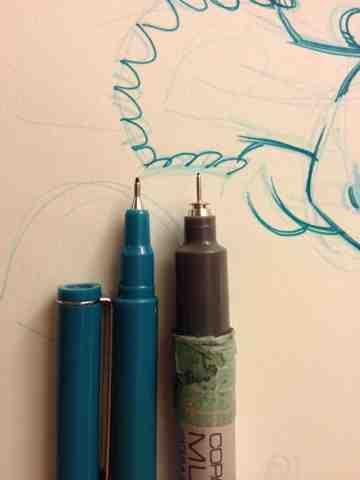 Compared to a .1 Copic Multiliner SP

Inking with a LePen is similar in feel to inking with any non-art pen, so the results look very much like a doodle.  The ink does go over waxy blue lines, which is a plus, and the ink is true to the plastic barrel color. 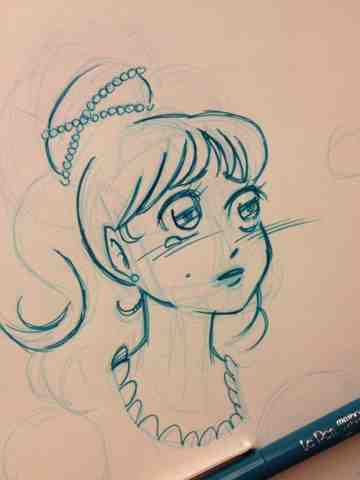 I do not recommend the LePen for drawing, but I'll probably keep it in my purse for jotting down notes or quick sketching.
Email Post
Labels: Marvy LePen review