July's been a pretty busy month for me, seeming to wiz by as I rushed to get packed and moved.  I don't take change very well, and my sketch output actually increased as the days ticked away.  As favorite tools were squirreled away in boxes, I had to become resourceful with my remaining materials.

Nashville isn't known for it's illustrative art scene, and while there are art stores in the area (Plaza, Jerry's Artarama), neither hold a candle to the Dick Blick that opened a year ago on Broughton Street.  Because I'd checked out Nashville (and their art scene) before moving here, I was able to prepare ahead of time, popping by Dick Blick for some last minute supplies.

While there, I picked up a light pthalo green big brush Pitt Pen, both for testing purposes and to help me simulate the Pantone Seafoam tone I'll be using in a future comic project.  You'll see both the mini test and my research for toning further on in this post. 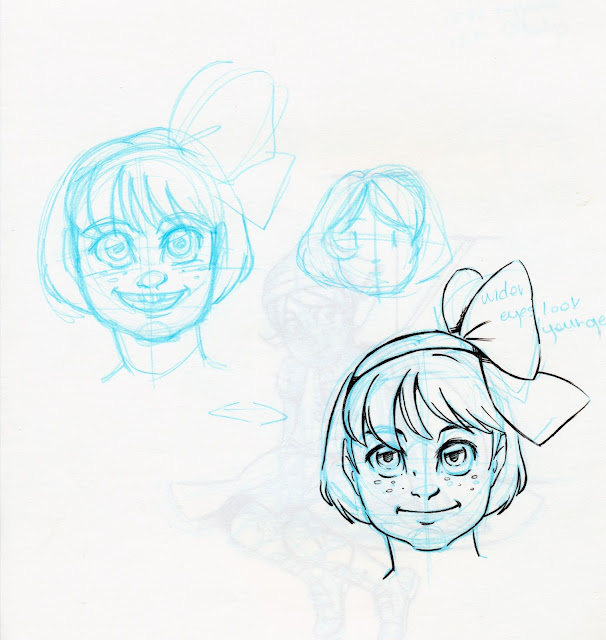 The project I'm currently working on  is about Kara when she's a six year old, so I did some test sketches (and test inking) to practice that.  I wanted her to look cute but not cloying, and be recognizable as Kara.  This project is in black, white, and seafoam rather than full color watercolor, so I knew it'd be a challenge to translate a character I'm used to rendering in color into near black and white, so I've done a lot of inking studies lately.  Also, before starting my watercolor Kara pages, I was informed by several comic editors that my inking style was too heavy for the artstyle I was using, so I've been trying to find ways to lighten it up. 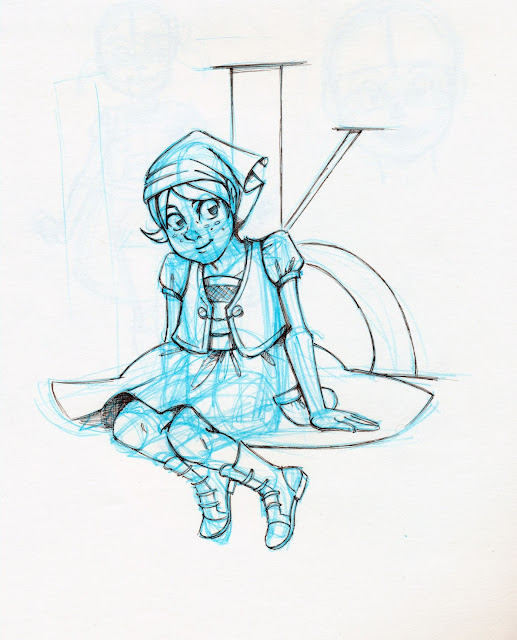 One of these solutions was to break from using fude pens, and aim toward a sketchier inking style inspired by the inking in the manga, Children of the Sea:

I've always been attracted to lighter, sketchier inking styles found in shoujo and josei manga, but I'd shied away from inking that way myself in an attempt to give my drawing style a more American influence.  Unfortunately for me, that American inking influence didn't do my art any favors.

So I decided that since it didn't take much more work than pencilling, and because it looked so much better, I was just going to ink the majority of my sketches from now on.  This forces me to become comfortable with inking straight over drawn bluelines, and I have to think more strategically, since I can't easily erase.

Of course, I realize the manga I'm emulating are inked using nibs and occasionally brushes, and rely on heavy use of tone to convey form (something I'm sort of adverse to, because it can really flatten out an image, IMO), and I don't necessarily intend to ink with nibs (the ink lines they leave dry too slow).  I'm a bit out of practice using a brush, so until I get the chance to hunker down and do some practicing, I guess I"ll be using techpens for a bit. 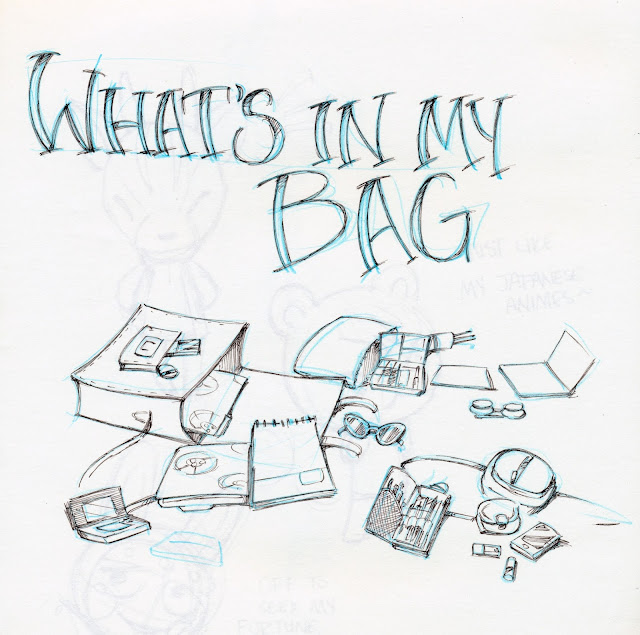 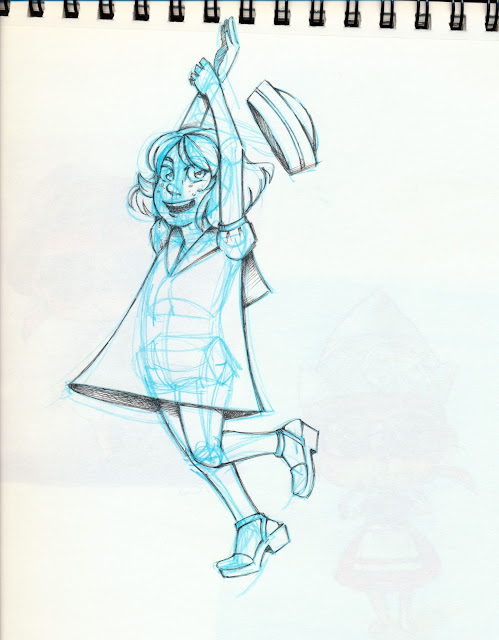 I've also been doing Animal Crossing New Leaf fashion doodles and rendering them with Copic markers.  I actually have a bunch more inked, I just haven't gotten around to coloring them yet.  While doing this, I learned that Pitt Pens and Microns will smear from Copic ink, even after hours of drytime, and even if done on toothy sketchbook paper that doesn't have a kaolin coating.  Copic Multiliner does NOT smear, however.   I've been using this exercise to try and push my use of complimentary colors as shading colors, going darker than I'd usually feel comfortable with.  I've been pulling a lot of inspiration from Brianne Drouhard (PotatoFarmGirl)'s Copic work.   I've also been pushing my use of Copic Wide markers to create washes, with varying degrees of effectiveness.  If you're interested in using Copic Wide  markers to create wash effects, you can pull back the color using your colorless blender (err, it DOES need to actually have ink in it, mine was running kinda dry). 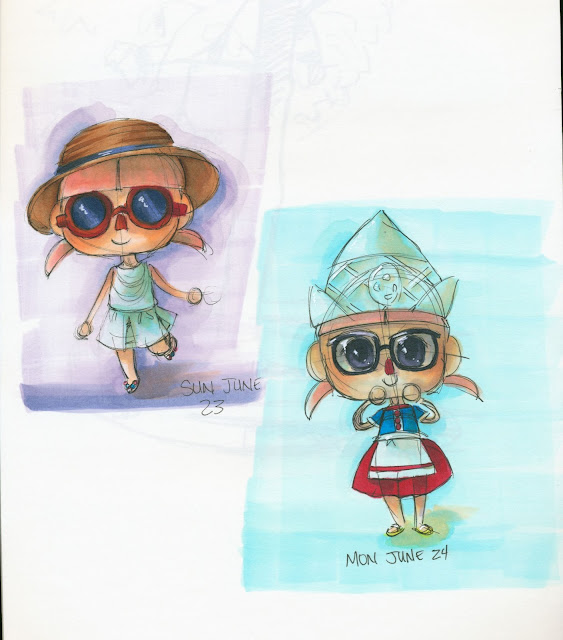 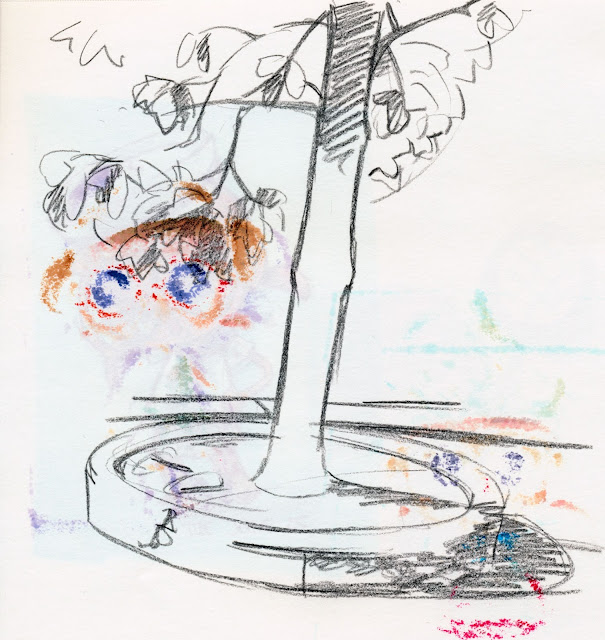 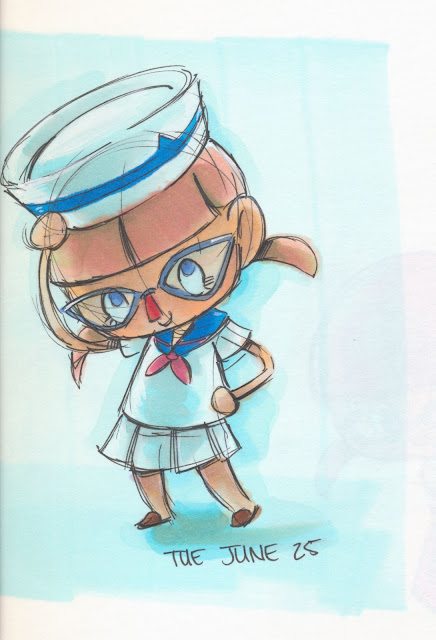 And you can always use a little gouache to help pull your colors in the right direction. 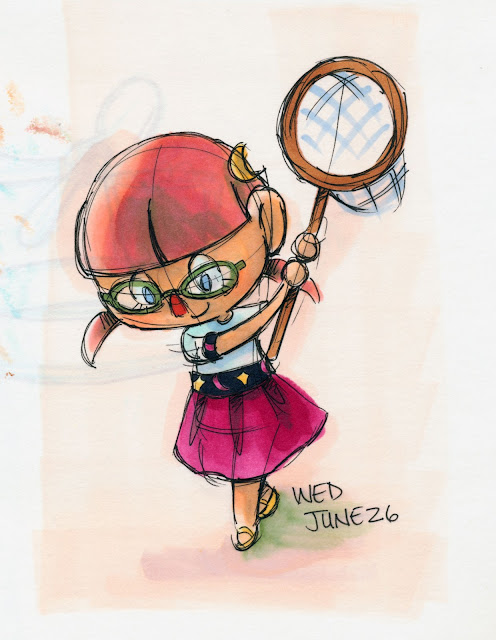 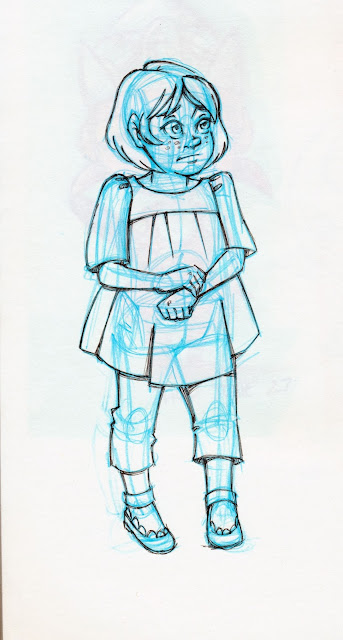 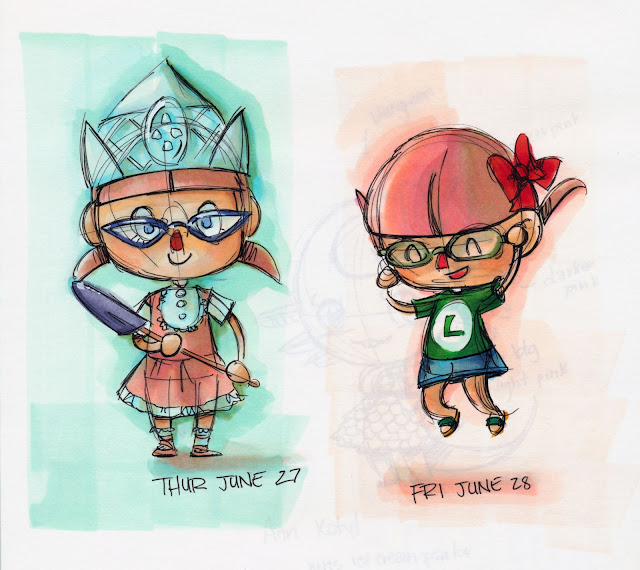 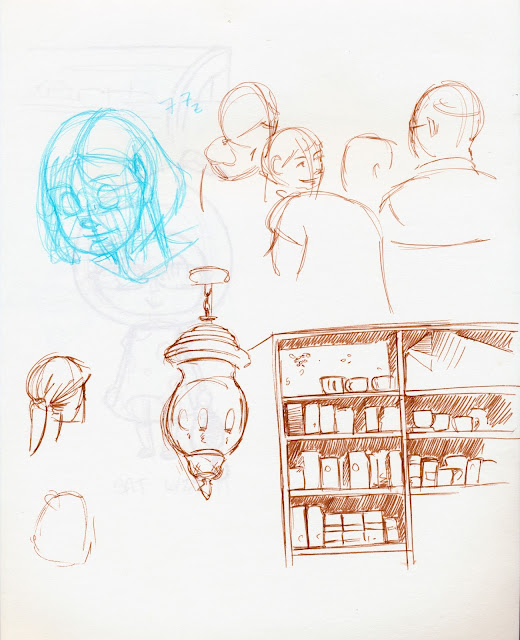 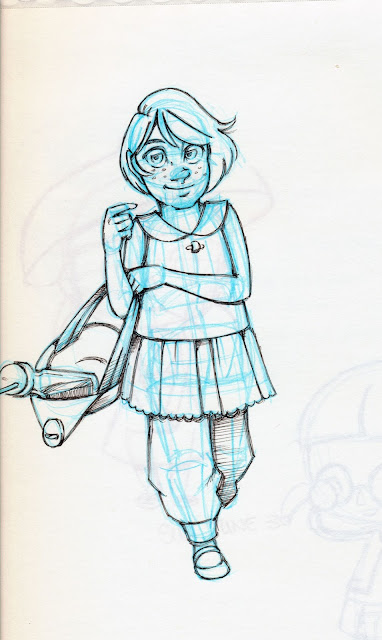 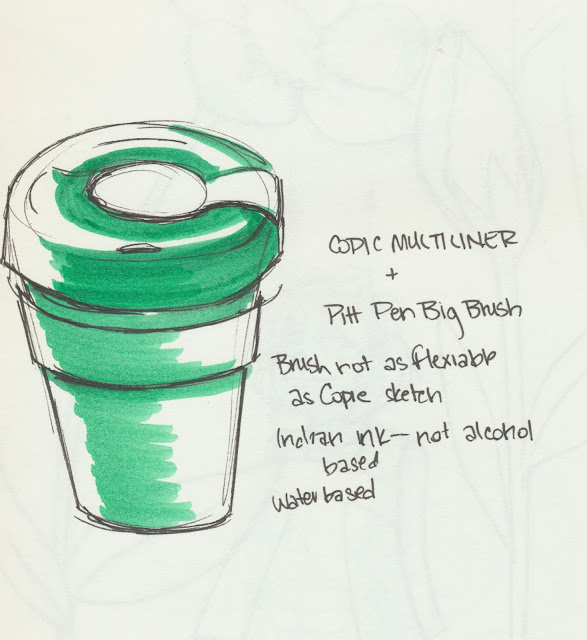 So here's my first tone test/ mini Pitt Pen Big Brush review.  I have a Pitt Pen brush pens in various colors scattered throughout my art supplies, somehow I manage to get sample ones at every turn.  I'm not really fond of the brush part of Pitt Pen Brush pens or Pitt Pen Big Brush pens, as it's not flexible at all and eventually gets ratty.  I keep a black Pitt Pen brush pen in my pencil case for filling in spot blacks on doodles, but still don't think much of it.

Something that's really NICE about these pens is that they use India Ink, which pushes them from 'marker' to 'pen' for  me.  I haven't really played around to see if they blend at all, but they do do something that most markers I've used don't- they go over waxy blue pencil like a champ.  This is pretty key for my next few drawings. 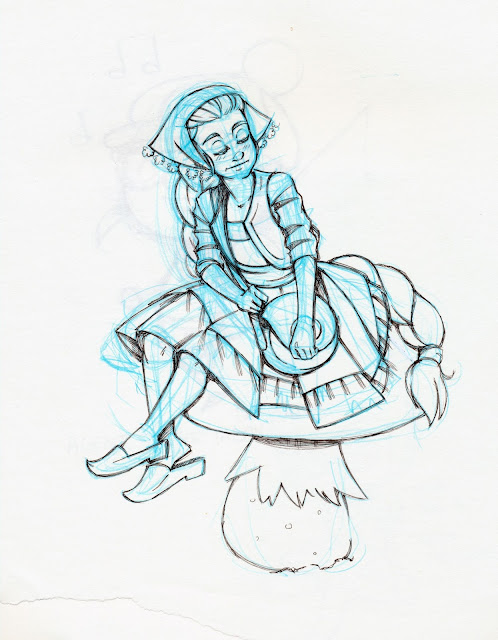 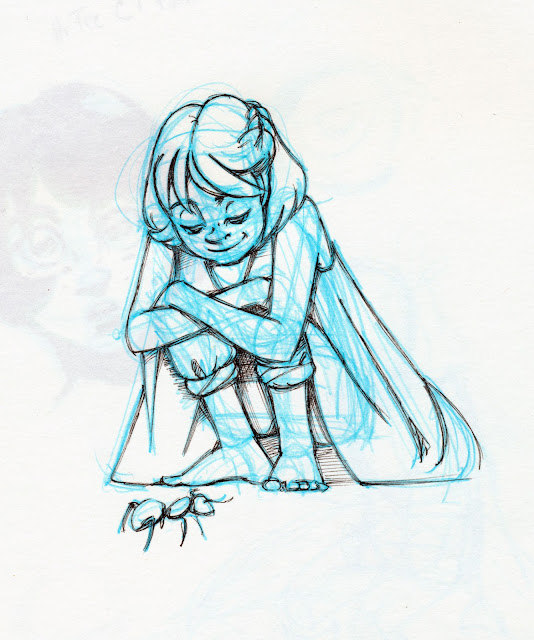 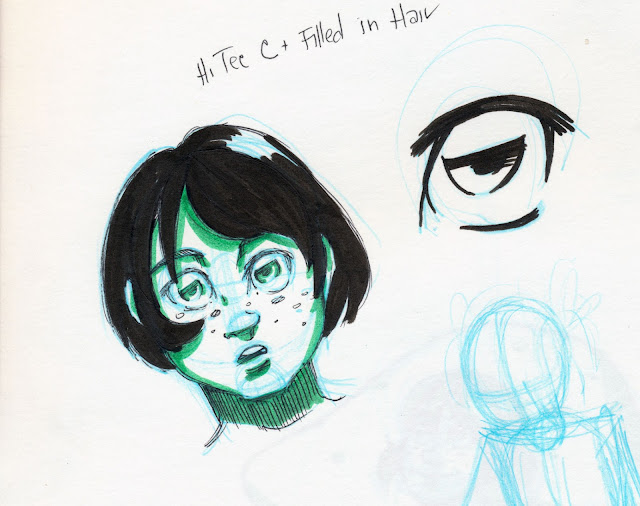 See, I'm currently working on a comic that's going to have an accent color.  And I've never actually done a comic with an accent color to account for.  I've done color comics (such as 7" Kara), and I've done black and white comics, and I even did 20 pages of a greyscaled comic four years ago, but an accent color changes a lot of things.  This upcoming comic utilizes seafoam, which is a cool color, whereas the story I'm doing has a warm feeling, so I wanted to practice utilizing a cool accent color without compromising the tone of the overall piece. 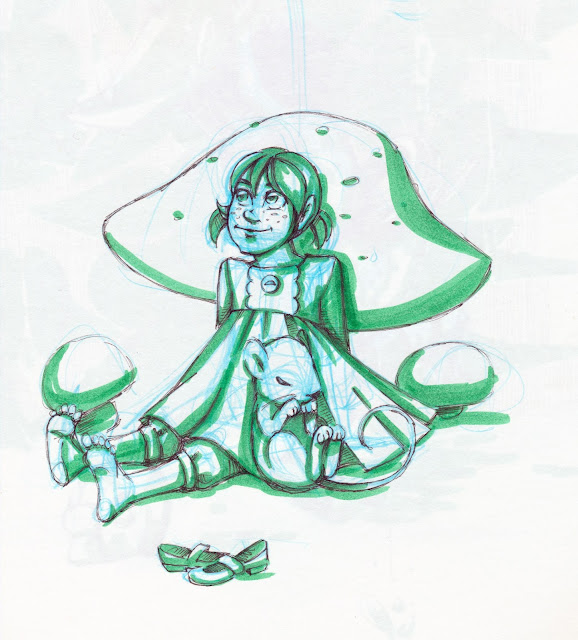 I knew I wanted to limit the tone to mostly shadows and background, so I played around with that.  The Pitt Pen Big Brush's has no flex to it, and tends to leave a very blunt line rather than a nuanced line.  It's fine for roughing things in, but isn't good for delicate work. 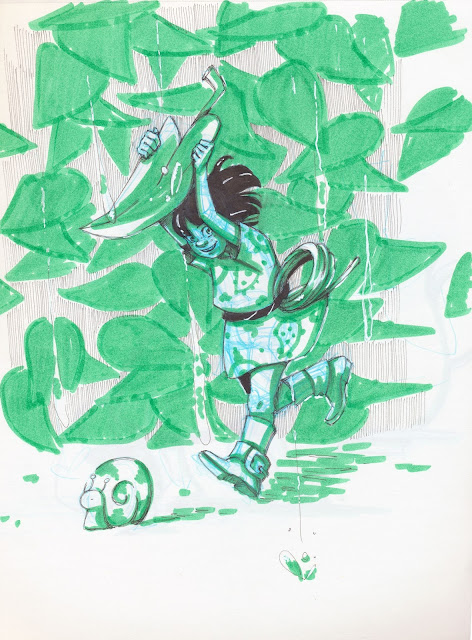 While noodling around with toning, I decided that the green works really well as a primarily background color, popping whatever's in black and white to the front. 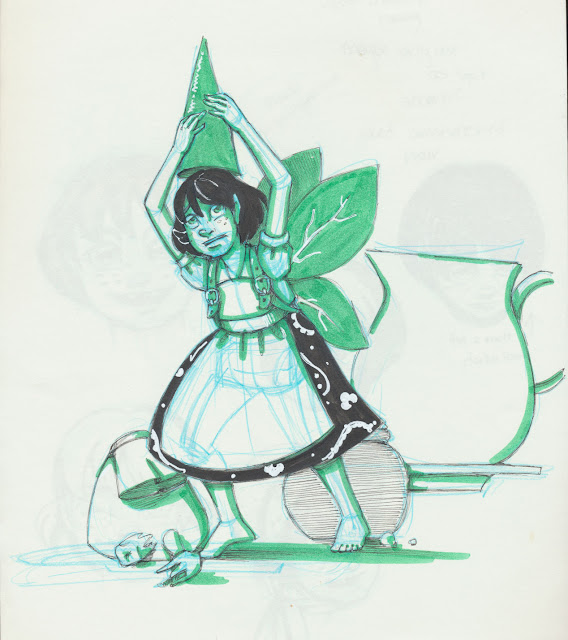 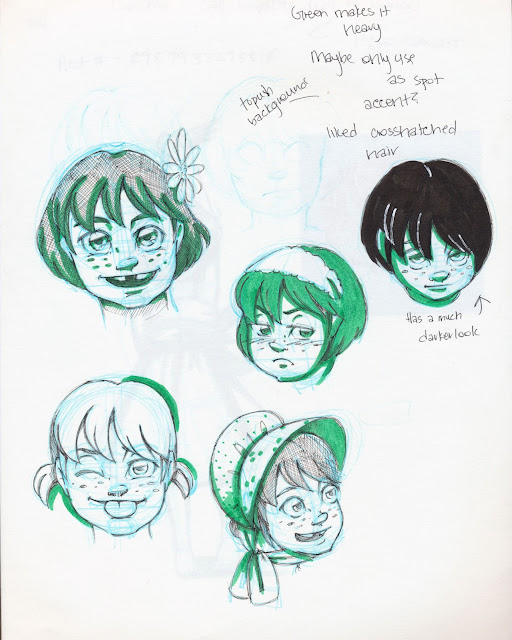 It's a little out of order, but this is the primary test.  I felt like the color tone was really going to make the comic a struggle until I started setting some rules for myself.  Although I usually avoid blacking in Kara's hair, it's important that she be the most visually striking thing in the comic, so any spot blacks should be on her.  The easiest way to do this without weighing her down is to make her hair black with white highlights.  Although the black hair gives the style a bit more of a somber tone than desired, it beats the green hair and the hatched options. 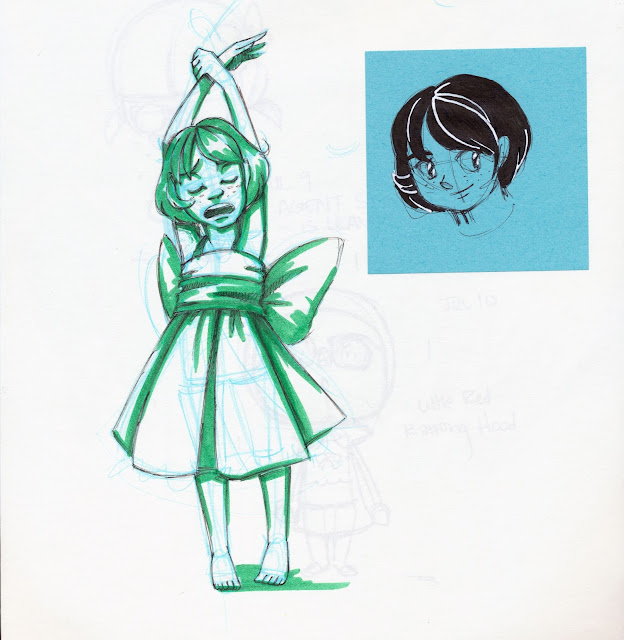 Another style test, and noodling about in a Takahashi inspired style. 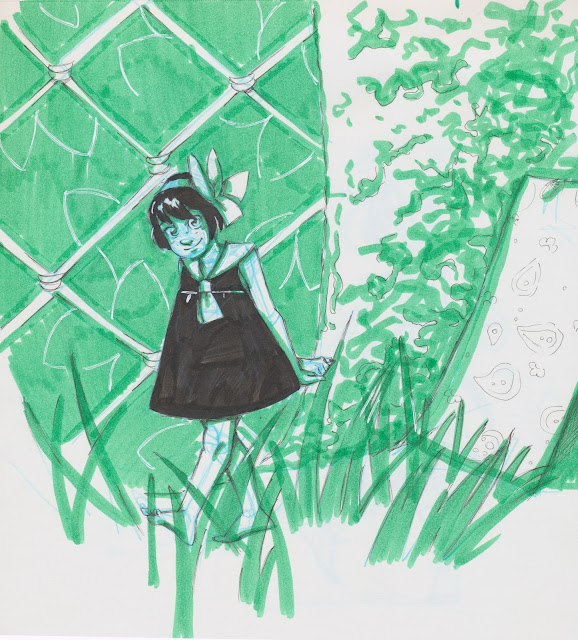 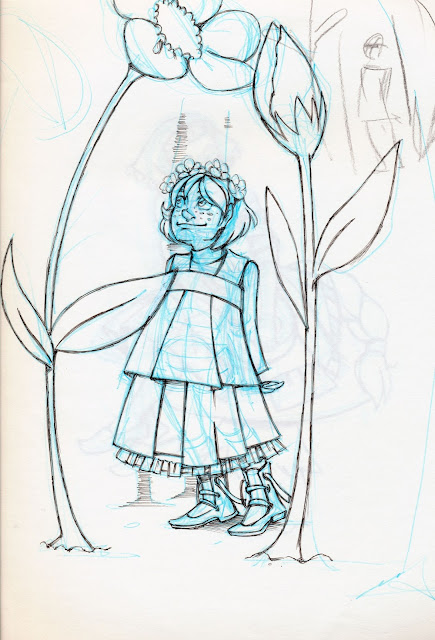