I've had an interesting relationship with watercolors for a long time. In highschool, I admired the delicate effect watercolors gave lineart. I tried to replicate that effect with Crayola pan watercolors, and cheap watercolor pencils, and wondered why my watercolors looked so awful. During my undergraduate career, I dabbled in watercolors for my Little Red Riding Hood stop-motion animation, but my supplies were pretty embarassing- a battered Koh-i-nor set of pans and cheap brushes from Michaels.

I became serious about using watercolors during grad school. My infatuation with markers (transparency, flexiable brush allowing for expressive strokes) lead to an interest in watercolors. My first 'serious' set was a 12 pan Cotman field sketch set, which I augmented with piecemeal pans purchased while in Japan. As my needs grew, I expanded to a 24 piece Winsor Newton set (still using my Japanese set), and I've since migrated and merged my sets into a blank palette box. Of course, as my watercolor set has grown, it's become less travel-worthy, and I began to become interested in travel sets.

A friend of mine has somewhat recently posted some shots of the watercolor paintings she's done using her Sakura Koi set. I inquired as to the quality of the pans, and she said it was remarkably good for the price. While I was in Houston, I finally encountered a Sakura Koi field set in the wild, and made the plunge.

Of course, for me, the field set was not enough. It includes 12 pans of color, including a white, but no opaque white (useful for highlights). It came with a sponge and a waterbrush, but I never use waterbrushes, so I purchased a few paintbrushes (Princeton Neptunes, cheap(ish) but quite servicable synthetic brushes with decent snap), as well as a tiny water container and a pouch to carry it all. 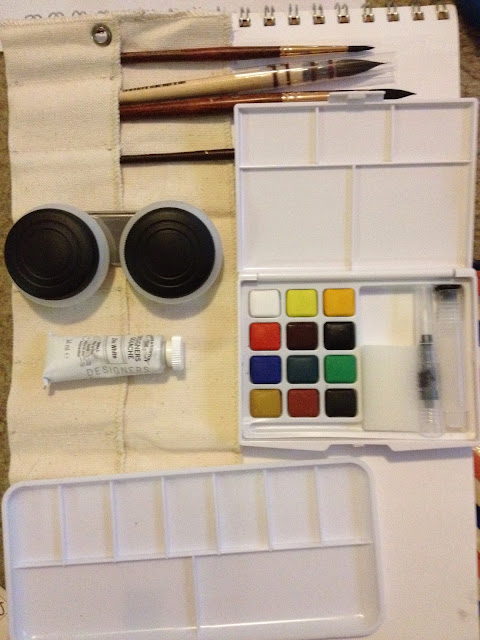 So here's my setup.  One rolle for my brushes, one small plastic palette, one field set of watercolors, one tube of white gouache, a small handful of brushes. 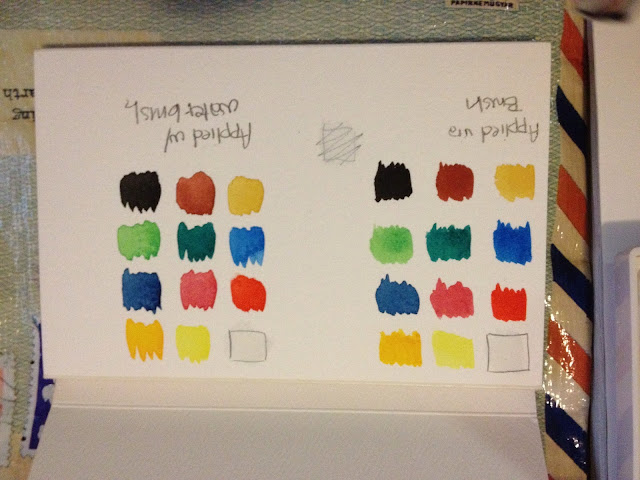 And here are some swatches- applied with waterbrush on left, and using a regular brush on right.  I'd feared that the Sakura Koi pigments would be dull, but they're actually pretty vibrant. 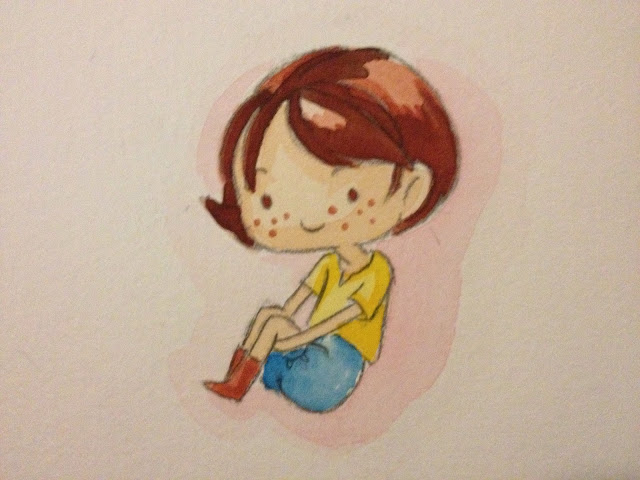 Mixing colors with this set isn't difficult either, although if I were doing more detailed watercolors, I'd want a good indigo, a nice grey  (like Payne's grey), burnt sienna, and at least a nice red violet.  This set does not include any true purples, which can be difficult to mix, and the reds run to vermilion and the included red violent is rather rose.

If you're interested in putting together a decent travel set of watercolors, I recommend investigating Fluid watercolor papers as a portable option.  They're gummed on two sides, although I have some issues with them coming lose.  I just use masking tape to secure them.  They don't warp like many of the papers I've used, and don't need to be stretched beforehand.    I also include a couple sheets of Viva paper towels in my travel set, as they're very durable, thirsty paper towels that can be used for a long time.
Email Post
Labels: Sakura Koi travel watercolors