Another month has passed, and another Art Snacks has arrived at my door.  As per usual, it arrived in a size appropriate box, wrapped in green tissue paper, and included an information card (they call it a 'menu' in keeping with the snacks theme) and a treat (this time it was Double Bubble).  Since I've talked about Art Snacks twice before, and reviewed the service, this post will serve mainly as a deboxing. 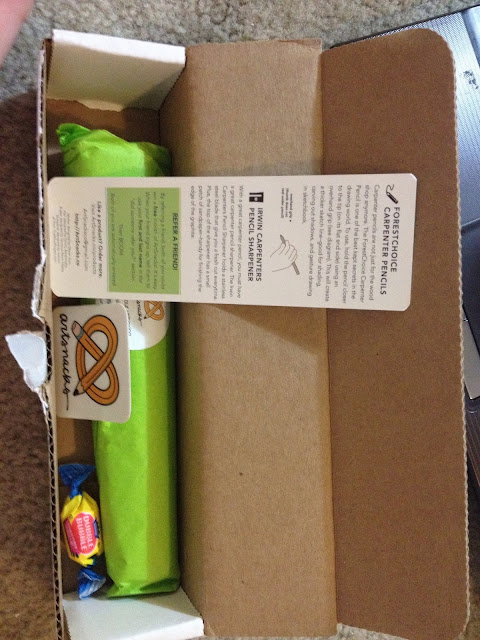 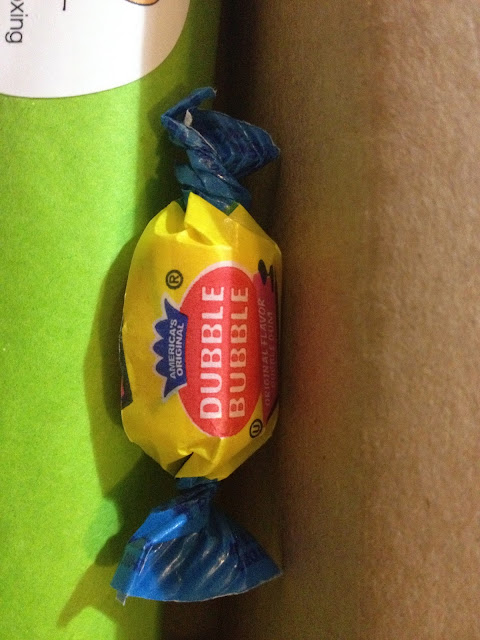 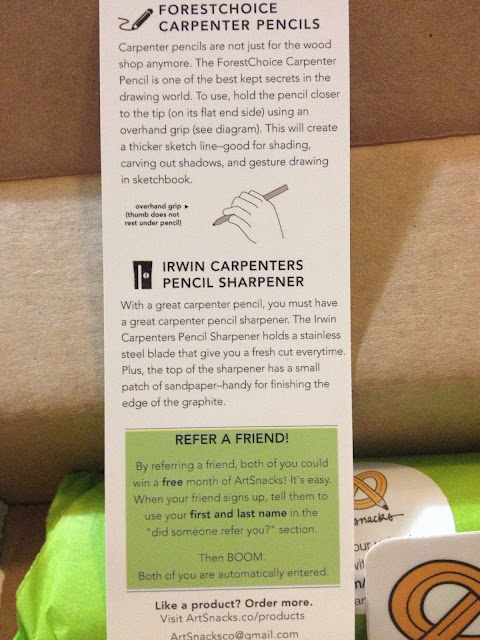 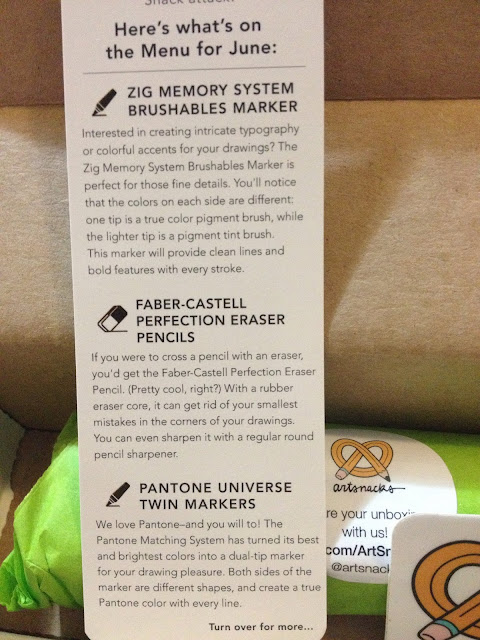 The snacks on the menu for this month were:

Faber-Castell Perfection Eraser Pencils (which I'd never used before)

Forestchoice Carpenter Pencils (I've never used this brand, but I have used carpenter pencils for sketching)

Irwin Carpenters Pencil Sharpener (something I've never even seen before! A dedicated sharpener for carpenters pencils)

So all in all, I was pretty impressed by the list for this month's snacks. 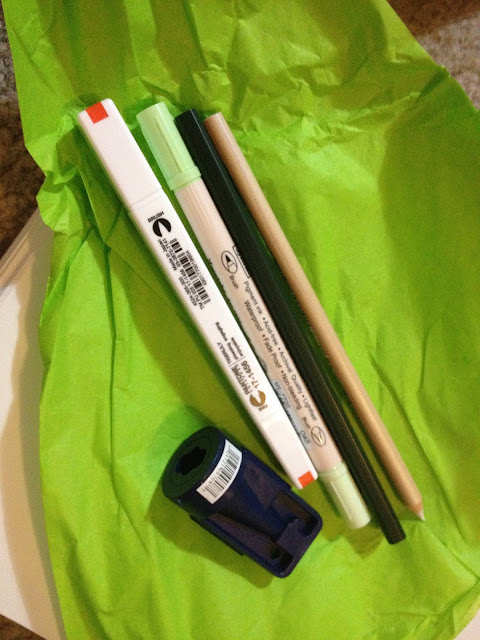 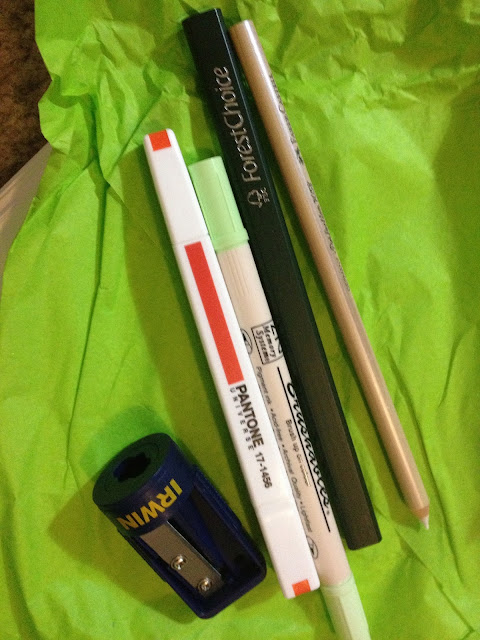 I did a quick test of the Perfection, and found it to be sandy and ineffective at removing blue lines from paper.  If you're interested in a sharpen-able eraser, you'll be interested to learn that most Clic-Erase erasers can be sharpened in a conventional sharpener. 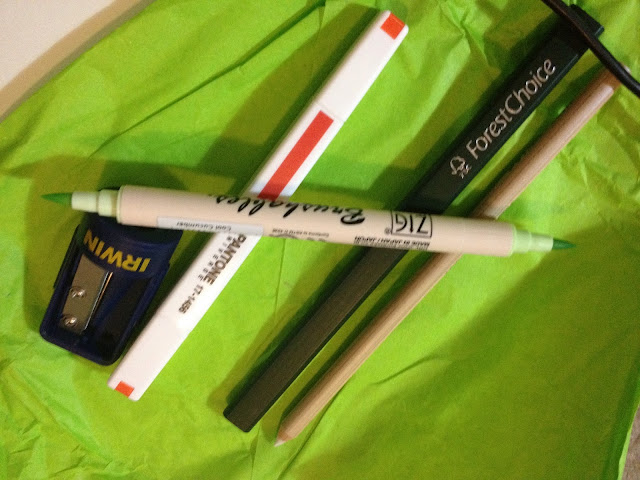 I haven't had an opportunity to test the Zig Brushable marker just yet, but from the little research I've done, one end is a slightly lighter shade than the other.  It's a twin tipped marker that features a brush tip on both end.  I may have to do a little more research and possibly order a few more, and rescind my moratorium on marker tests. 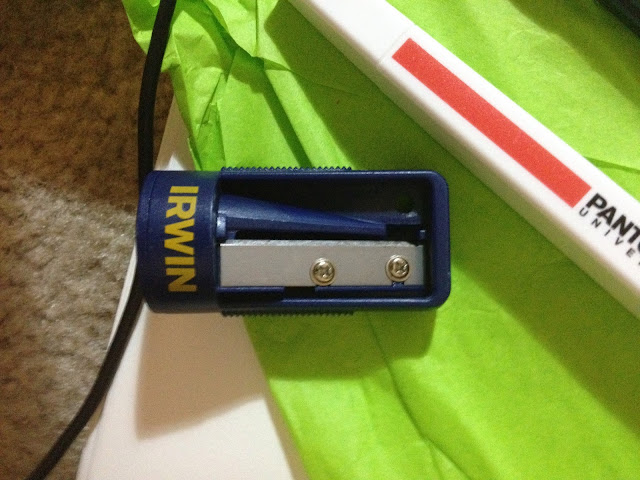 The Irwin Carpenter's Pencil sharpener really caught my attention.  I've sketched with carpenter's pencils off and on (usually stolen from my dad's workbench, but occasionally purchased with my own big-girl money), a habit borrowed from my father (no, I never stole the actual pencils he was actively using, and he was always aware that I was taking them).  I like the chunky, gestural lines that carpenter's pencils provide, as well as the richness of the graphite (it has to at least be a B in softness, it marks wood so well), but I've always sharpened mine using an Xacto blade or sandpaper.  This is a bit of a hassle, and I always ran the risk of cutting myself.  I never realized that carpenter pencils had dedicated sharpening tools (I just assumed everyone hacked at them with knives like myself and my father), until this month's art snacks (yes, maybe I was raised under a rock).

Anyone familiar with carpenter's pencils have noticed their very unusual shape that won't work with conventional pencil sharpeners.  I was eager to discover Irwin's solution to this problem. 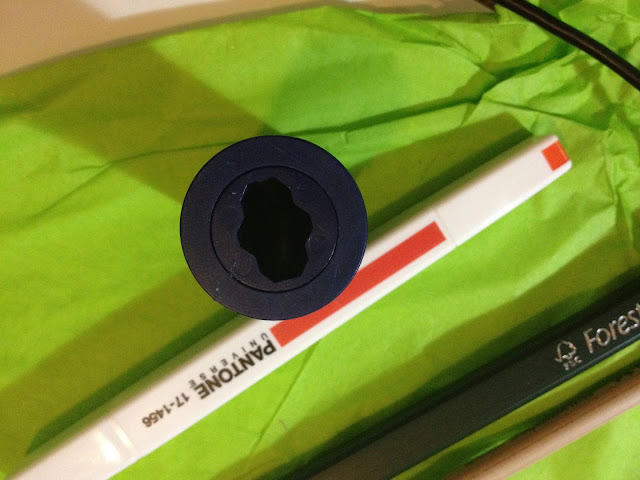 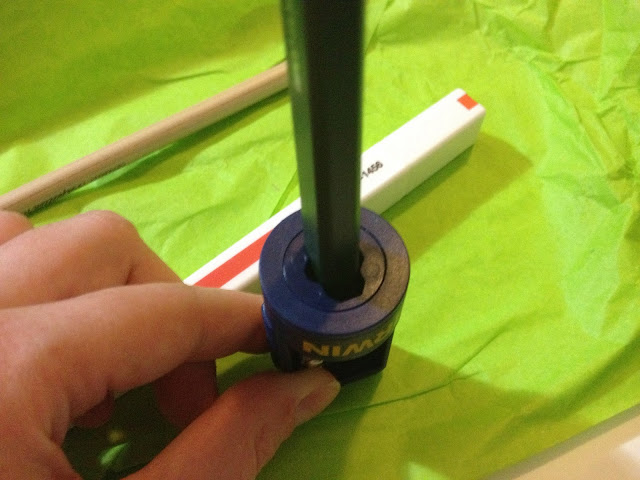 This large sharpener has a free spinning mechanism that holds the pencil in place while allowing it to spin past the blade.  This makes for a larger sharpener, and it also eats up a lot of pencil at each sharpening pass. 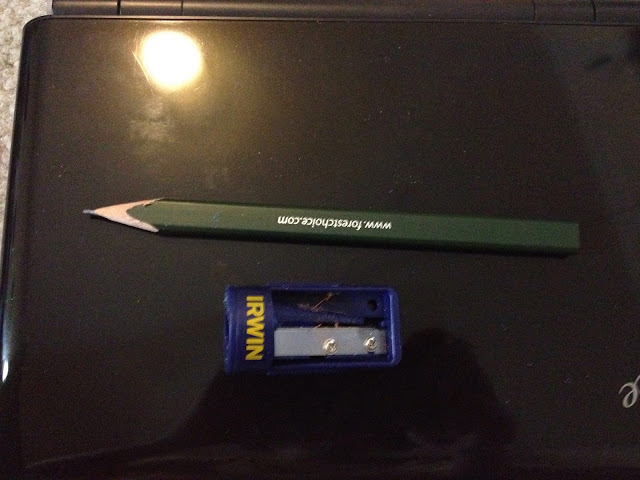 It's hard to see from my super classy photo, but the graphite is actually squared off.  Should you be interested in having a point to your carpenter's pencil, the Irwin sharpener includes a little patch of sandpaper at the top.

I feel like the quality of the Art Snacks has gone up since my first subscription box.  The materials are not necessarily more expensive now than they were in the past, but they're more interesting (in my opinion), and certainly more geared toward an illustrator (I'm totally biased here).  I definitely feel like these are tasty little art treats, intended to introduce me to new products.

I plan on subscribing to at least one more month's worth of Art Snacks with the intention of reviewing the products within, and I look forward to sharing my deboxings here.
Email Post
Labels: art materials art review Art Snacks art supplies