I've attended a plethora of conventions in the past few months, ranging from Heroescon way back in June all the way to my latest, New York Comic Con just a couple weekends ago.  This convention rush has had quite an impact on my life, including a Staph infection that had me laid up and behind for several weeks (Interventioncon), and with Blogger getting kinda screwy with my blog (I can no longer schedule updates, pre-written blog posts don't post on the date I hit 'publish', but magically appear way back in the timeline on the date they were first drafted), it may seem like I've dropped off the face of the Earth.  While these things are unfortunate setbacks, this convention season hasn't been a total waste.  After attending all these conventions, I've learned several valuable skills, which I'll share with you guys today.

For those of you unfamiliar with the term 'tablescape' see Sandra Lee, of Sandra Lee's Semi-Homemade.  While her 'cooking'  may be dubious, her tablescapes are totally legit, with budgets that rival some student films.

I often get more compliments on my tablescapes than I get on my actual work, leading to believe I may have a future in creating convention setups, and should give up this comic pipedream. 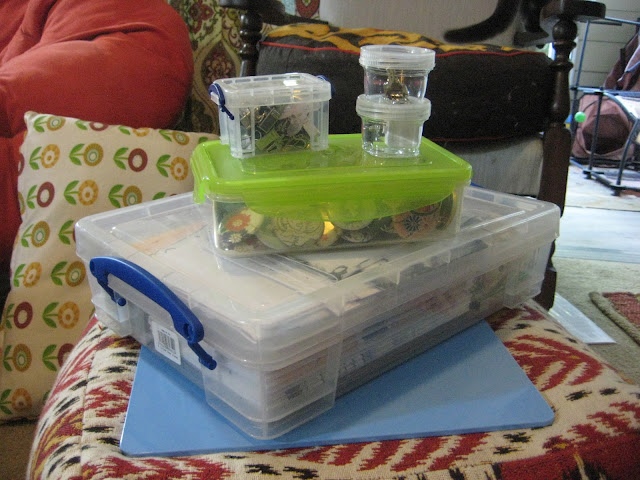 When you're flying to DC with two people's worth of convention wares, one large suitcase, a bunch of inking supplies, and a 50 lb weight limit per checked bag, you have to get smart.  That 50 pounds adds up fast when you take into account the fact that you're going to have to pack your precious conwares in plastic shoeboxes, as there isn't an airline in existence that cares half as much about your stuff as you do.  A flurry of conventions has taught me how to be a master packer, improving both my Jenga AND my Tetris skills while teaching me to hate airlines, to distrust the bathroom scale as a means of measuring luggage weight, and schooling me on the true weight of paper.

Being ADHD, I'm naturally disorganzied.  I work in an environment of chaos on a daily basis, for better or for worse.  But when you're juggling three seperate conventions in a single month, you'd better get organized quick.  Over the past year, I've found various ways to compensate for my natural deficiency, including taking inventory before, during, and after the convention, trying to always pack my supplies the same way every time (hard when you're sharing a table and using an alternate setup), and having a special notebook designated for taking con report notes.  I save my receipts in a special little file folder, organize my art supply coupons, and even have binders reserved for blog planning and convention planning.

One thing I've learned to appreciate is simplification.  Before Blogger started having issues, I appreciated my ability to schedule posts in advance.  Once that feature became broken, I utilized the ability to save posts as drafts, work on them during my freetime, and post them from my phone.  Now that feature's gone, blog simplification is a thing of the past for me, which means my schedule has become unfortunately erratic.  When you're dealing with a lot of things, simplification is a godsend.  Having a smartphone has enabled me to juggle many things at once- my social networks, my physical social obligations, my photos for con reports, reference for commissions.  I don't have to worry about access to wi-fi or power outlets, as long as I charge my phone the night before ,I'm good to go.

Whether we embrace it or not, artists need to be salespeople.  When you're peddling your wares from a 6' cardtable in a crowded convention hall with 100 other artists, you need to really sell yourself and your wares.  Before going convention-crazy, I felt like my work should sell itself, but I've changed my stance on that.  I'm not yet a master saleswoman, but I've certainly levelled up in that regard since I first started doing conventions.  Part of this is because I've always been a bit of a natural...

You need to figure out why people should like your work, and you need the confidence to see that when you look at it.  If you don't have this confidence, you need to learn how to fake it.  I'm still in that 'faking it' stage (aren't most of us?), and it's often easier for me to sell other people's work than it is to sell my own. As a salesperson and a representative of your work, it really is your job to convince others that it's your wares they want to buy.  Sometimes that requires a pitch, spiel, or spin.

All of these sales and spins have required me to level up into being a business woman.  I am the mistress of my own destiny, and that means I have to do it all.  I have to research and book conventions, flights, hotels, make plans within the city itself.  I have to make sure I have enough postcards, business cards, prints, and reprints of minis.  I determine when it's time to make another charm set, when to launch new buttons, and when it's time to upgrade my table setup.  When a convention is a failure, the responsibility generally rests squarely on my shoulders for not preparing properly, and I'm the one who eats the costs.  In addition, I am responsible for costs (both upfront and afterward), taxes, and generating the graphics for the new products.  Sometimes I think it'd be much easier to work with an agent, and I know it'd be much easier to work with an editor, but unfortunately, I'm just not there yet professionally.


I'd have nothing to sell or spin if I hadn't learned how to be a bit of an entrepreneur.  What works at one con probably won't work at another.  Mini comics don't sell very well at anime conventions.  Fanart prints probably won't sell well at an indie comic con.   And even when you have something that tends to sell well at a particular TYPE of convention, there may be such a flood of that item in the market that you see very few sales.  As a comic artist who attends conventions, I have to try to think ahead of the crowd and think out of the box, constantly brainstorming for new ideas.

I think I must have an invisable charm around my neck that makes me attractive to the awkward turtles of the world.  Maybe it's because I'm a sympathetic ear, perhaps it's because I can't frighten lurkers away from my table, or possibly it's because I have this reverse SUCKER tattoo'd on my forehead, but the lonely souls of the convention tend to tell me their woes in great detail.

This in and of itself isn't charismatic, it's being a doormat, and I'm no advocate of that.  But there's a fine line between being a jerk to socially awkward adult males and gently convincing them that maybe they should explore the rest of the artist alley, and not just the front of your shirt.  And this line is where charisma lies.  If you can gently convince an awkward nerd that it's time to move on or buy, you can move mountains in life.  It's far easier to convince someone who's actually interested in buying your stuff to buy it than it is to convince someone who's interested in asking you out, but not interested in buying a thing, to get a move on.

I am more than well aware that I've done nothing but write about conventions since August.  Sure, there's the odd sketch dump, and one day in October blogger decided to post all of my process stuff instead of spreading it out, but the overwhelming majority of my posts have been about conventions. I have to admit, I'm not actually a fan of conventions.  I don't actually find them fun anymore.  I dislike crowds, I hate chaos (although I recently admitted to working in it), and I've got too much work to do to spend a weekend being a geek in a line.  Right now, conventions are a type of work for me.  There are aspects of cons I do like- I like meeting other artists, I like getting portfolio reviews, I like informative panels, I like meeting new people, but honestly, all these things start to blur together when you've done five cons in two months.  I'm running out of things to say about conventions and ways to say it.  I'm getting tired of posting blurry cellphone pictures.

This requires me to be my own editor.  It's a challenge to attempt to write about this plethora of conventions in new and interesting ways, to present the information in a way that is both useful and engaging.  Sometimes it's hard to choke down the disappointment of a bad convention and restrain my complaints, especially when I have friends who had a similiar bad experience egging me on.  My goal is to provide the sort of information that's been hard to find online (accurate convention reviews from an artist's standpoint, breakdowns of process, ect), so I don't want to mince words either.

Lastly, I've developed some PR skills during this convention season, although they haven't gotten as much practice as I'd like.  As with all other things mentioned above, I'm responsible for my own public relations.  Right now, there isn't a whole lot to do, as I'm still just a small fish- update Twitter occasionally, try to organize get togethers when I'm in town, update Facebook on occasion, update the blog about conventions. I have plans for some big improvements after the new year, implementation of some new tricks I've learned, but that's going to have to wait until things have settled down here.
Email Post
Labels: comic artist skills conventions list