Last weekend, Heidi and I drove the four hour trek to Atlanta to attend a very special anime convention.  We’d been contacted a few months prior by Becca Dinoff to present a few art panels at Anime Weekend Atlanta.  Although there were no artist alley tables available, Anime Weekend Atlanta provided a unique opportunity for Heidi and I to experience the other side of the Artist Alley.

Three Conventions in One Month

September was a crazy busy month for us, convention wise. We'd planned on attending Mechacon in New Orleans for a few months, but they took awhile responding to our Artist Alley request.  Shortly after we got the ok from the artist alley staff, we were contacted by Becca Dinoff, asking if we'd be interested in presenting a few panels at Anime Weekend Atlanta.  As a former cosplayer, I'd heard a lot of great things about AWA, so I jumped at the chance.  Right after we'd started making plans for AWA, Interventioncon responded to a months old request for artist alley tables, and we found it hard to say 'no' after our buddy Chris Paulsen begged us to go, and our friend Emily Kluwin said she'd try to make it.  Classes resumed the Monday right after Mechacon, so September was pretty booked solid.   All in all, there was a lot of classwork and freelance work done behind various artist alley tables in between customers, and a lot of late nights trying to get commissions finished up.

We’d been originally contacted to present four art panels- a Drawing 101 on Friday, an ACEO (artist trading cards) panel and an Anatomy panel on Saturday, and wrap up with an ACEO panel Sunday afternoon.  Unfortunately, I’d gotten a staph infection from a spider bite while I was in DC for Interventioncon, and a series of emergency doctor’s visits (and many, MANY rounds of shots) kept us from leaving until Friday afternoon.  Fortunately for us, someone was able to fill in our Drawing 101 panel for us, and we still managed to present our other three panels.  For both ACEO panels, we were mainly there to set up the supplies, explain the project, help people when they had questions, and facilitate the trading of art cards should the artists desire it.

This was our second time presenting the Anatomy panel at an anime convention, so it gave us an opportunity to tweak it and make it more interactive.   In this iteration, we removed the animated gifs in favor of live drawing demos on newsprint, and because we had a much larger crowd than at Anime South East, we were able to answer some really interesting questions and solve some difficult problems.  In the future, I’d like to break the presentation down even further, as it covers a lot of material for an hour and a half lecture, and make it a three part series that focuses on specific areas.  I’d also like to remove much of the text from the lecture and instead provide hand outs or a QR code to downloadable content.  As it is, the Anatomy presentation is difficult to present live, as it’s full of text.  However, I was extremely pleased with the turn out and I hope that our presentation was able to help other artists.  One of the biggest problems I have with the anatomy presentation is that I'm not sure who to tailor it to- beginning artists or more experienced artists.  By breaking it into segments, I can tailor the segments to applicable skill levels.  Another problem is that a lot of the attendees are teenagers, so we can't go into detail explaining how to draw breasts correctly and are limited in the amount of detail we use.  By having a tiered approach, our last session can be 18+ and we can explain the figure in more detail.

The Artist Gallery (Or The Art Show)

When we were offered the panels, we were also offered space in the Artist’s Gallery, where artists can purchase panels to display and sell their non-fanart artwork.  These pieces are later offered at the silent auction, where convention attendees can bid on these pieces.  While the majority of the work was original in both senses that the artist owned the content and that the piece for sale was one of a kind, there were many prints and fanart pieces.

I personally feel like including prints (pieces printed from a computer printer, not traditional prints like screenprinting, intaglio, or linoleum) cheapens the value of the originals in the show.  It's very hard to compete with a $10 high color saturation print with a $40 original watercolor, particularly if you're unknown. Unfortunately, neither Heidi or I made any sales from the Artist Gallery, but a lot of our business cards were gone, so hopefully we'll have some new fans in the future. 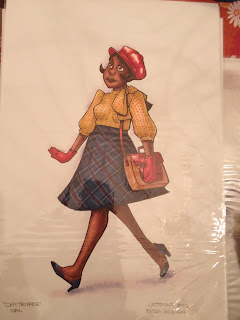 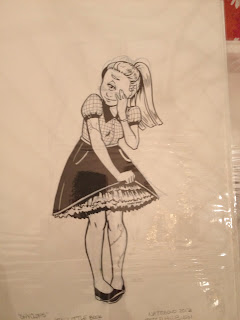 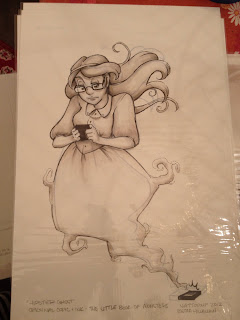 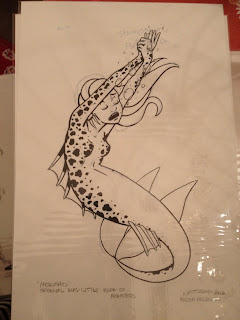 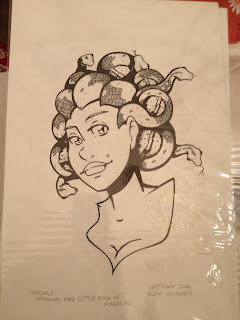 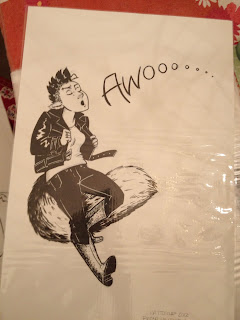 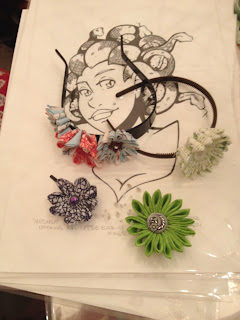 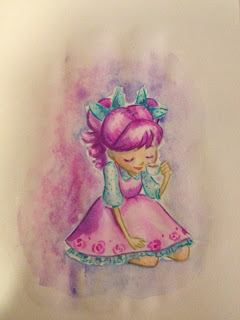 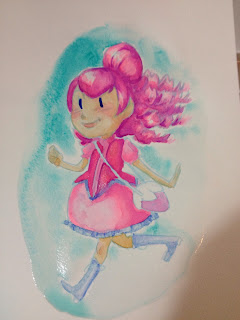 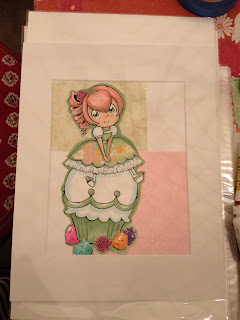 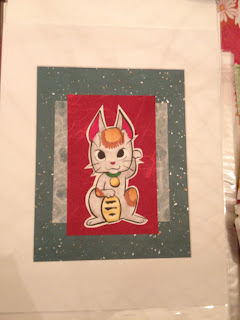 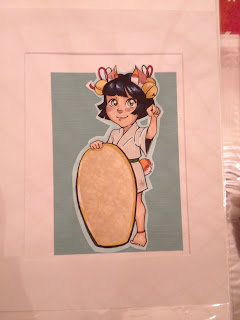 We also participated in the fan auction, where convention attendees decorated fans to be sold to raise money.  Heidi and I both took ours home for the evening so we could use the media of our choice.  Heidi decorated hers with Copics and mine was decorated using watercolor.  Fortunately for Heidi, the cheap paper of the fans LOVE Copics, but unfortunately, they DO NOT love watercolor.  The fans turned out very cute, and actually sold for $30 each, far surpassing my expectations.

Because we weren’t constrained behind an artist alley table for this convention, Heidi and I had the flexiability to explore the convention as well as to leave when we were ready, making Anime Weekend Atlanta a very relaxing convention.   We spent a lot of time in the artist alley, purchasing from other artists, handing out our cards, and generally enjoying ourselves.  I was so caught up in the moment that I forgot to take photos, so unfortunately you’ll just have to take my word for it (or better yet, check AWA out for yourself)!  We found the convention itself to be very well organized, but particularly appreciated the organization and curation of the Artist Alley.  I have heard AWA referred to as “THE cosplay convention”, and while the cosplay was certainly stand out (I didn’t attend the Cosplay Contest, so it may have been even more impressive), I can say that the Artist Alley was one of the best I’ve ever seen.  I would also say, from the abundance of pink and cute, that the Anime Weekend Atlanta Artist Alley is a haven for connoisseurs of the kawaii, sometimes to the artist’s detriment (there was possibly an over-abundance of cute-a-like items like charms and buttons), and an artist may find it a challenge to create something stand out in a sea of pinks, sky blues, and seafoam greens.

Anime Weekend Atlanta was also the first time in years that I’ve ventured into the Dealer’s Room at an anime convention, which was a stark contrast to the (joyously) crowded Artist Alley.  Although the Dealer’s room was also crowded, the room itself was far larger, allowing for more aisle space.  The crowd was generally one on a mission, there was far less meandering as people made a bee-line to the booth of their desire.  Heidi and I took a much more idle approach, and discovered that several artists were making the transition over to the dealer’s room, with mixed results.

The Pros to the Artist Alley Being Sold Out

Possibly the nicest thing about Anime Weekend Atlanta is that neither of us felt tied to a table.  Heidi described it as ‘weird’, but really, I felt like it was very freeing.  While I enjoy having artist alley tables, being both artist and saleswoman is very tiring, and while I love dealing with most of my customers, I get a lot of socially awkward visitors who have no intention of buying my stuff or checking me out online.  I appreciate that everyone could use a sympathetic ear sometimes, but I can only be that ear to 4 strangers per con, not the usual 30.  Not having a table meant that we didn’t have to start setting up at 9 in the morning, nor did we have to stay until convention closing at 10pm.  It meant we could eat when we wanted to, not when our assistant could grab us some fast food, and we could eat at a leisurely pace, not horfing it down while apologizing to onlookers for the fact that we too have bodily functions.  Best of all, not having a table allowed us to actually enjoy the convention without worrying about returning to our neglected table.  I haven't been to an anime convention just to have fun for a long time, and presenting panels at Anime Weekend Atlanta allowed me to justify the expense of my attendance.

The Pros of Presenting Panels at Anime Conventions

1. Many cons will comp your admission into the convention itself.  That's about $40 you don't have to pay.
2.  Some cons will throw in additional perks, like artist alley tables or panels at the Art Show.
3. You'll get to interact with other fans in a way that's directly relevant to your particular interests.
4. You'll get to meet lots of new people.
5. You're providing a useful service to other people.
6. You're building up a good reputation.
7.  You're directly contributing to better convention panel scheduling.

All in all, AWA was a fantastic anime convention, staffed by great people, and filled with amazing artists and cosplayers.  I really hope to be part of it next year, both in presenting new and improved panels, and by  having a table in the artist alley.  If you were on the fence about attending this convention, I HIGHLY recommend it, with two caveats:

1. Stay in a cheaper hotel.  AWA is held in the Galleria, and the adjacent hotel is a bit of a hike.  Anime convention hotels also tend to be prohibitively expensive.  There's plenty of free parking around the Galleria (including the mall parking lot, which is just a short walk away), so that isn't a problem.  Stay in a cheaper hotel to save money.
2. Don't eat AT the convention.  Heidi and I weren't very impressed by the fare in the Galleria.  The nearby mall has some tasty options (including Fresh 2 Go, which is fresh, affordable, and fast).
Email Post
Labels: anime anime convention Anime Weekend Atlanta Atlanta