The process of making a long comic can be daunting. Words entered into a text editor, however long it took to think up those words, are easily changed as soon as the writer has a better idea. However, a single comic page represents hours or even days of work. What can it mean to edit the “first draft” of a comic, except to simply draw a whole comic and then re-draw it? I've been trying to solve this problem ever since I first started drawing comics ten years ago. Over 700 pages of comics later, I've come up with a process I'm satisfied with, and happy to share it with you.


I'll be using my current comic, Alethia, and in particular chapter 5, as an example.


My personal method is designed to maximize two things: flexibility and efficiency. The first three steps, brainstorming, script-writing, and rough-sketching are in loose chronological order. In practice, I cycle between these steps until I feel the story is really solid. Only then do I start penciling.


All the raw material for the story usually comes from this stage, so it is a necessary, unavoidable part of the process, but how do you schedule it? Can you simply decide to be inspired? Though delicate, inspiration is not mystical or supernatural. There are things you can do to increase the probability that you will be inspired.


-keep a notebook and write down any ideas that occur to you whenever they occur.
-if you are working on a project but find yourself distracted by thoughts about another, consider putting aside the current project for a while and pay attention to the distracting thoughts. If something is exciting enough to be distracting, it might make a compelling story.
-go for walks to nowhere while listening to music
-think about your story ideas right before going to sleep/right after waking up. This is a fertile time for weird, new ideas.

(It wasn't until 2017 that this idea seemed to have potential. Glad I wrote it down)


Very important: Read new types of books that you'd never read before, go out of your way to talk to new and different people, visit new places (in your neighborhood, your city, or abroad; it's all good). You won't have new ideas if you don't experience new things.

The goal of this stage is to organize the main ideas.


At this stage I work out:
-the characters
-emotional arc of the story,
-main scenes and where they take place
-how does it end (my stories usually go through 3 or 4 ending changes before you see them)
-what does the whole thing mean?
-some dialog, but not much.


I don't worry about what picture goes on what page or how panels are arranged. Most of the details, unless they are the crux of the story, will come later. I usually work with both text and drawing at this stage: write the script, then draw character and setting concepts, then adjust the script based on new ideas from those sketches. 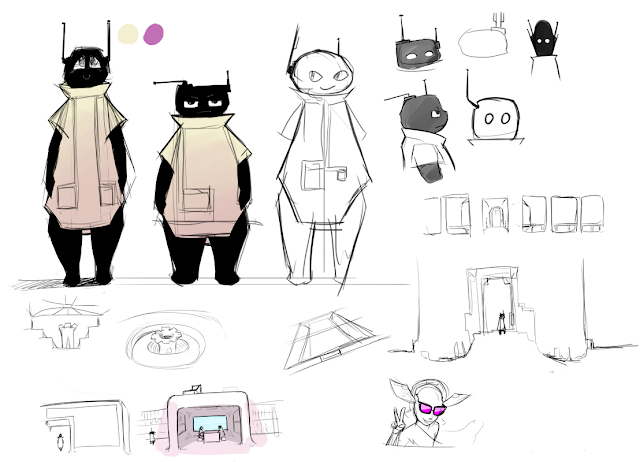 Because I'm the one who will draw the comic, the script style is not important. It tends to be very dry and resemble stage directions most of the time.


After I finish writing the first draft of the script, I solicit feedback, then write the second draft in the same text document, right under the first draft. Repeat until satisfied. Once satisfied, I write a brief summary of the whole story and then proceed to rough sketching.

The most difficult stage. The goal is to get all of the important information on paper, without any details


This is a lot to worry about, so thank god I already know who the characters are and what the main actions of the story will be from the previous stage.


This is the real “first draft” of the comic. I rough sketch the entire story or chapter, so usually 30-70 pages. These aren't thumbnails, just really ugly sketches in the same exact photoshop document that I will use for the final page. Zero effort is put into making it look good; save that for later. Some .psd files contain 4 or 5 rough sketches, on different layers, of the same comic page but laid out differently. Looking at the different options helps me choose the best one. 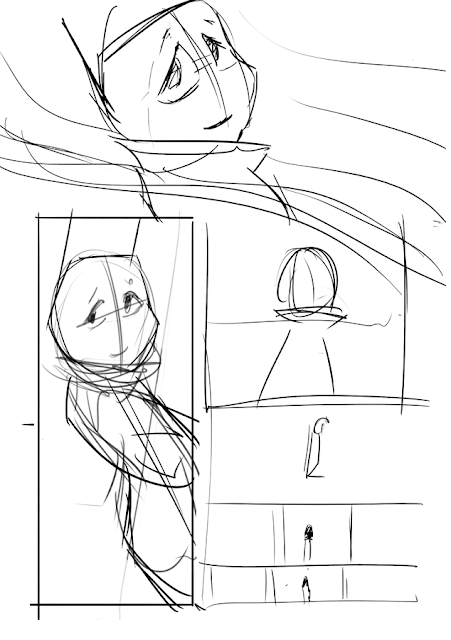 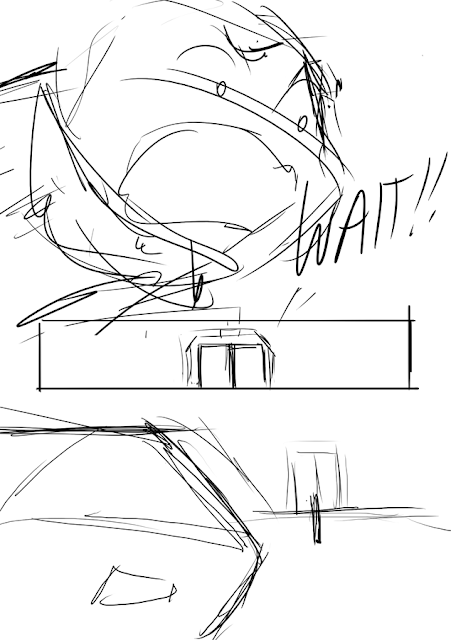 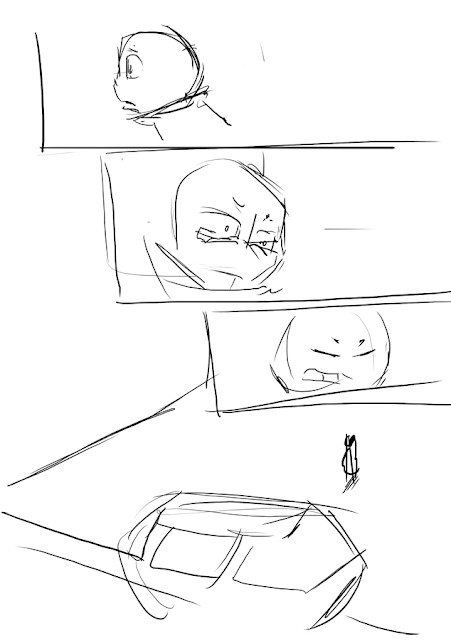 I draw the whole comic like so and then read over it multiple times, making adjustments each time. Because I didn't commit much effort to drawing these pages, it's easy to change or discard them. Last year I wrote an entire chapter of Alethia that was 80 pages of rough sketch, but I ended up rejecting it. Much less tragic than drawing 80 colored pages and deciding I don't like them.


Adobe Bridge becomes a crucial tool now. I use it to read over the current story before I start working each day, and also to reference settings and characters across the story without having to open each page in photoshop. Back when I worked with ink and paper, I used to tape the entire current chapter to my studio wall.


During this stage I solicit more feedback. Dialog is adjusted, but remains loose and open to change.

Now the process starts to resemble the process of creating any other type of illustration. At this stage I:
-finalize character designs
-finalize set design
-add some details that were not crucial to the plot, including all background details
-finalize dialog
-finalize layout
-actually draw the comic 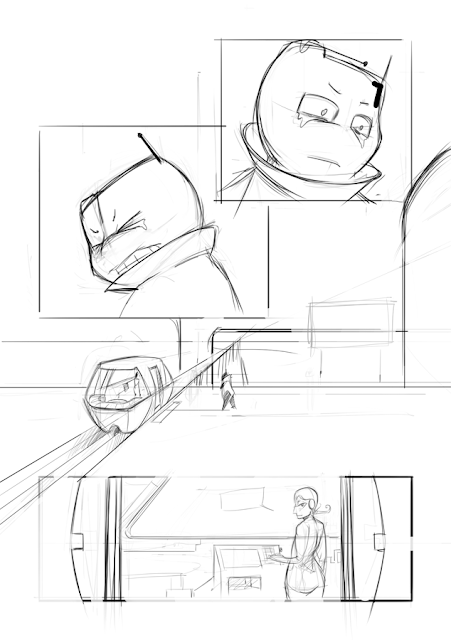 
It's true; sometimes I do wait until this step to finalize the character designs. Uncommon, maybe unadvised, I know, but I have my reasons. During the rough sketch stage, I had to draw a very rough version of the characters tens or hundreds of times, allowing me to get familiar with what expressions they are likely to make. By waiting until pencils to finalize their design, I go into the design with more information then I would have if I started with a final character design and tried to build a story around it.


I'm always willing to discard an old idea in favor of a new and better idea at any point during the process, so after finishing pencils, I read through the story again and make adjustments, sometimes adding more pages or cutting things. I like the freedom to change things as I go rather than plan every line of dialog and every camera angle in the script stage. 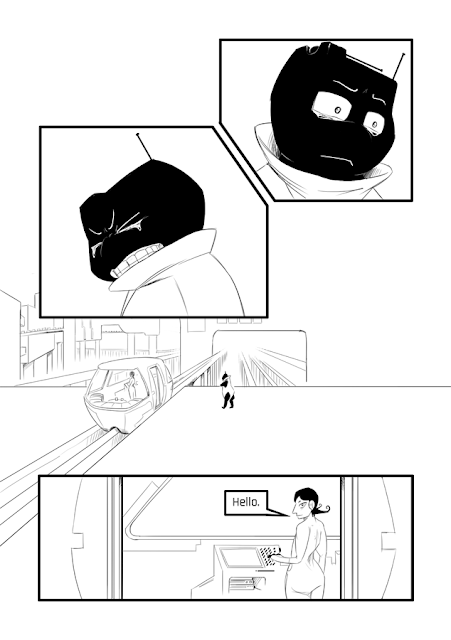 This is the most relaxing stage. 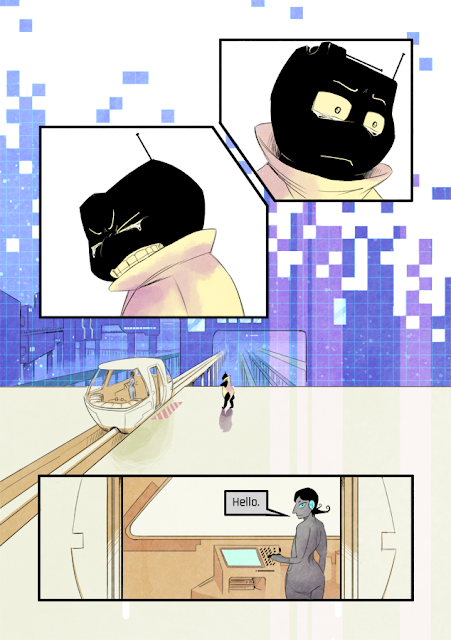 It's only in the last few months I've been happy with my colored comics. It's important to me that some form of experimentation is available even at the final stage of the comic-making process, otherwise I will feel bored. For this page, I hadn't know what I was going to do with the middle panel. I didn't decide until the coloring stage, but I knew the feeling I wanted to convey and I worked on it until the feeling was achieved.


You must find someone else to help you with this stage; it is impossible to spell-check your own writing.


And with that, the comic is finished. From initial conception to digital release takes roughly 4 months for a 60-page comic and that includes writing. My method has many benefits over other Western comics methods in that it is faster (Marvel comics take 3-4 people one month to make 20 pages of comic), provides better panel flow and pacing, and allows for maximum artistic experimentation throughout the whole process. Well, of course it all depends on if you like my results. Thanks for reading, I'm Kristina, creator of 14 Nights, Alethia, and Yasha Lizard. 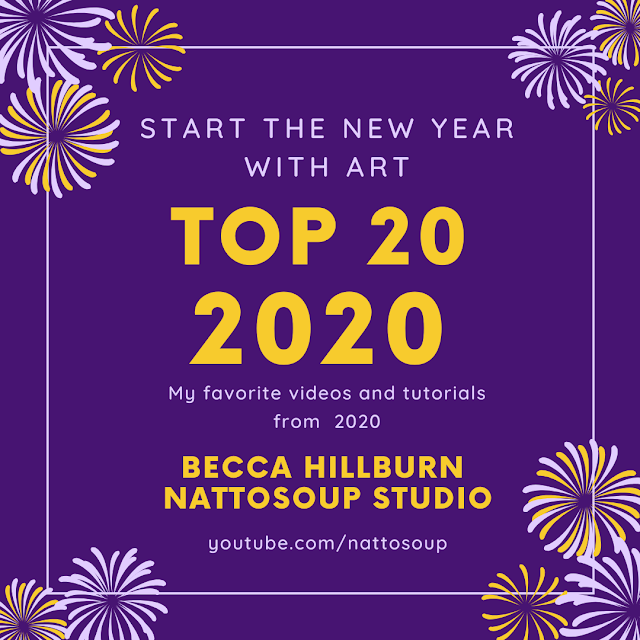