So You Want to Sell at Craft Fairs


I've done anime, gaming, comic, and even a few furry conventions over the years, but at my seven year mark, I feel like I've hit a bit of a dead end.  Sales are GREAT at the show itself, but there's no follow up, no post con interaction, and I felt like I was burning myself out.  These events usually run from one to three days, are indoors, and are limited to one table, and tend to only attract people interested in that niche.  Most of these events also charge entry or badge fees, and many of the three day events encourage attendees to book a hotel room or pay for parking as well, making the cost of general attendance quite high.

Although I've had success at anime and comic conventions selling my comic, 7" Kara, and my mini comics, I wanted to try family events, as my focus is kid lit and kid friendly media.

This weekend, I broke out of my comfort zone, and tabled at the Nashville Cherry Blossom Festival.  I wanted to reach a new audience- parents with small kids, grandparents, general art fans, and I wanted to start tabling at craft fairs.

I offered to share my tent, tables, and booth fee with a couple other Nashville artists, who shot the idea down as being too risky.  We all sell paper goods, and they feared the weather would conspire against us, and that sales would be poor.  Despite their misgivings, I carried on anyway, and I'm so glad I did.

I've stopped doing convention reviews on this blog due to the massive time it takes to compile the information, but if you enjoy posts like this, and would like to see more convention reviews, as well as convention tutorials, tips, and tricks from an expert, please consider backing my Patreon.  My work for How to Be a Con Artist (Nattosoup) is pro bono.


Prep before the show: 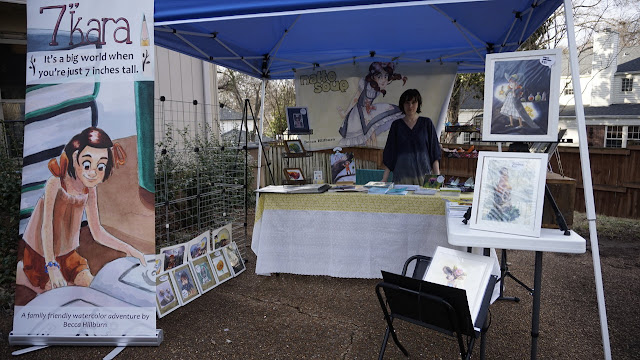 Before ever applying to Cherry Blossom Festival, I'd found a large beach tent for sale on Slick Deals- exactly the size I needed to do outdoor events.  I already owned a 6' table as a 'demo table', and a 4' table had been purchased when I was planning on acquiring a laser cutter.  I also had a couple folding outdoor chairs that were kept in storage.

I've applied to Tomato Arts Festival and TACA (as a paying member) for years, with no acceptance, so this year, I decided to create a demo setup on my driveway, to show proof of concept.  The demo setup took an entire afternoon, but helped me solve many problems in advance, and provided a necessary blueprint for at show setup.

When applying to Cherry Blossom Festival, I added these photos to my convention portfolio and mentioned that they should focus their attention on the craft fair setups.  I feel like this demo setup really helped me gain acceptance, as it showed that this little anime con artists was capable of more than just con commissions at indoor shows. 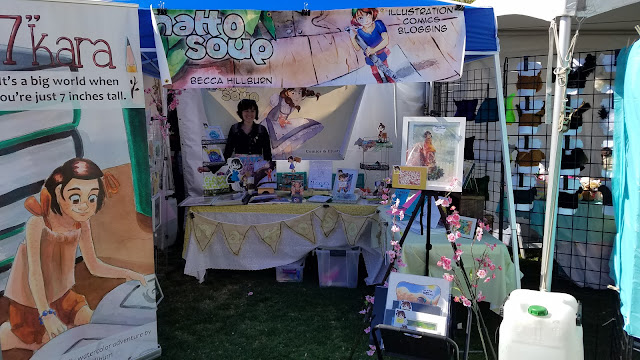 As you can probably see, I really amped my branding up.  Banners, banners banners!  There's a standing banner, my 6'x2' con banner, and my 6'x3' banner.  Since Cherry Blossom wasn't providing maps, I wanted to make it crystal clear whose booth this was! 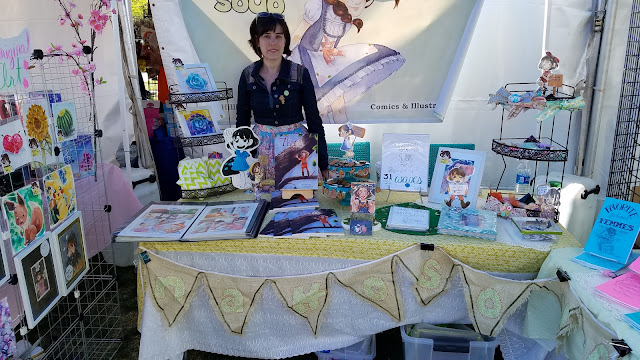 When applying for Cherry Blossom, tent walls were an option that wasn't offered for those who brought their own tent, but I lucked out- the tent behind me did pay for a tent wall, providing a nice backdrop!  My modular gridwall helped me block off space from the next table (anime figurines), and helped define the space as a coherent whole.

I wish that I'd had time to plan out a themed booth a bit better (I had big plans!) but March and April have been a huge crunch for me.  Next year, I'm going all out! 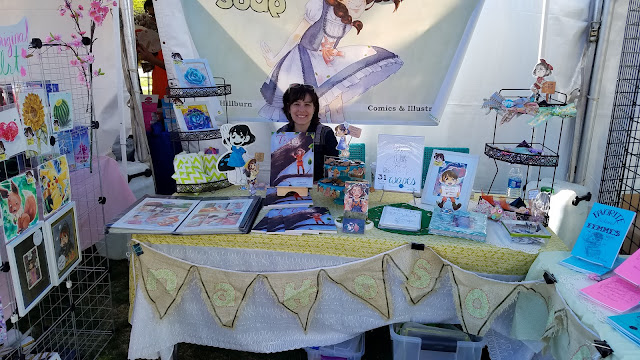 As you can see, I'm lost when I'm sitting, so I opted to stand, which allowed me to better engage customers.

The cute little shelves are actually matching shower shelves that I picked up from Marshall's! 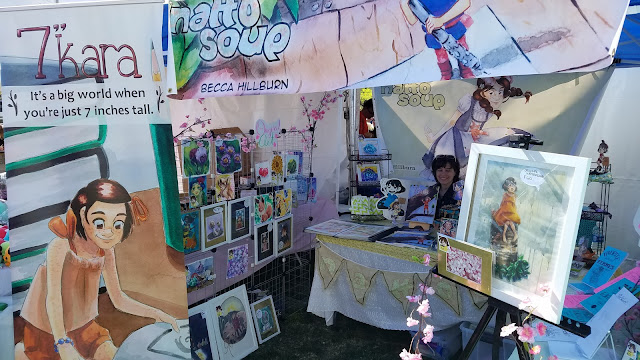 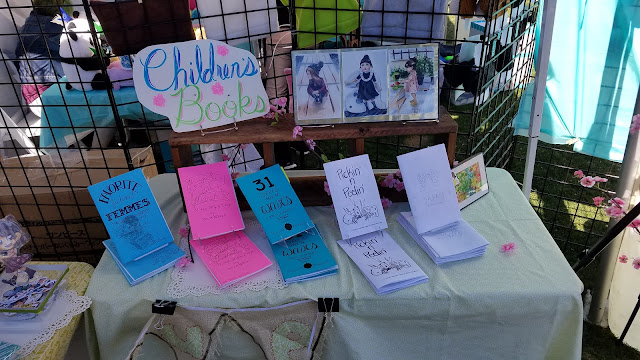 Perhaps if the minis had been on the main table with me, customers would have been more likely to pick them up and flip through them. 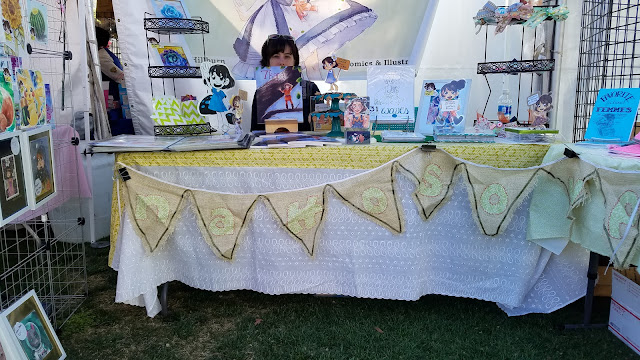 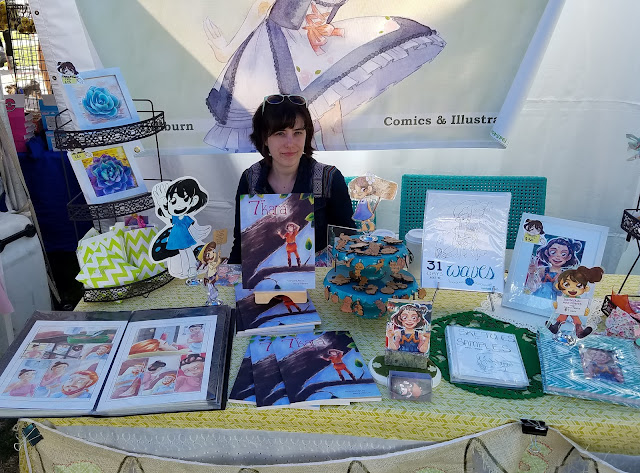 Those of you familiar with my convention setup will recognize most of what's on the tabletop- the only real difference is that with the extended space, I can display more originals and give things a bit more space!

For Nashville Cherry Blossom Festival, you don't need to own your own tent, chairs, or tables- you can rent them, but owning them, especially if they're purchased in advanced on end of season sale, can really help cut down on your costs.  Purchasing my blue tent for $85 cost less than renting a tent, although I was responsible for set up at the show (though there were wonderful volunteers to help!)
Setup was from 8:30-9:30, with the Cherry Blossom Walk beginning at 9:30.  Sales didn't really start until around 10:30, but were steady until 5:30.  Fortunately, Joseph was there to help- he handled sales while I ate, went to the bathroom, or was busy conducting other sales.  Bringing an assistant who is familiar with your merchandise and your work methods can be a HUGE help.

What I would change:


What Worked, but was out of my control: