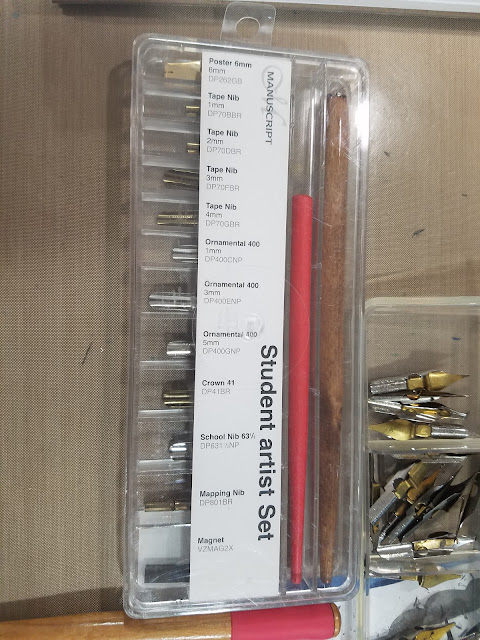 Crown 41
School Nib 63 1/2
Mapping Nib
And a magnet that doesn't seem to work with these nibs? 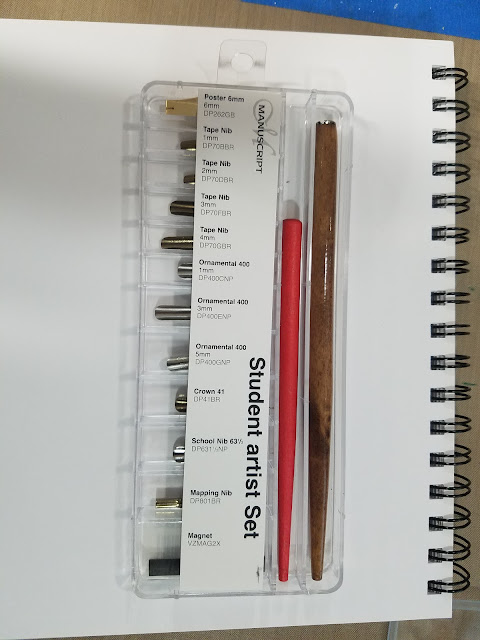 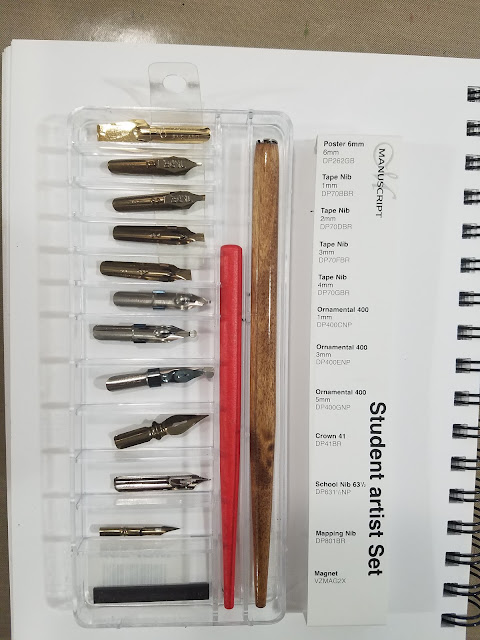 I bought this set at DickBlick years ago, but never got around to testing the nibs inside.  There are a fair number I'm unfamiliar with, including the Poster, the Tape Nibs, and the Ornamental.
Since these are new nibs, I'm going to use alcohol wipes to clean them all.  I am also using the Kuretake Sumi Ink 60 included with my Inktober ArtSnacks, and I'm testing on the Denik notebook sent with ArtSnacks- not because either of these are favorites, but because they're handy and they need to be field tested anyway. 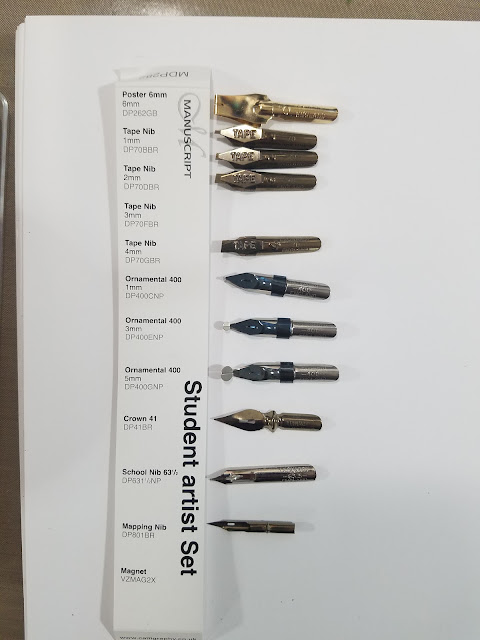 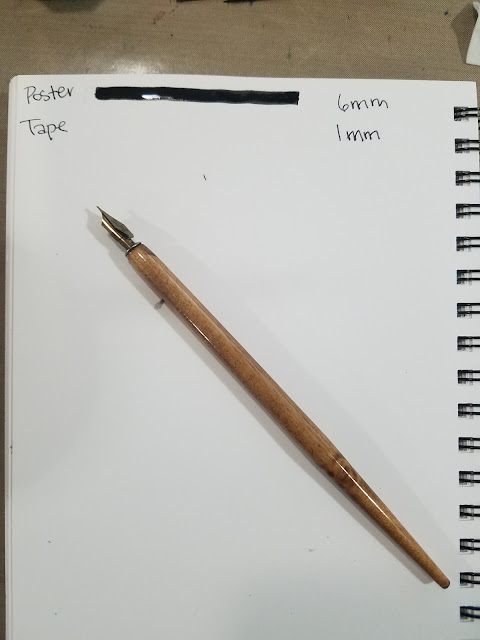 This is the first time I've ever used a Poster nib, but not the first time I've used nibs designed to deliver very broad strokes.  This reminds me of the Brush nib I mentioned in the Nib Overview recently, as well as of larger (0, 1) A and C fixed width nibs.  The Poster nib holds a lot of ink due to the folded nib. 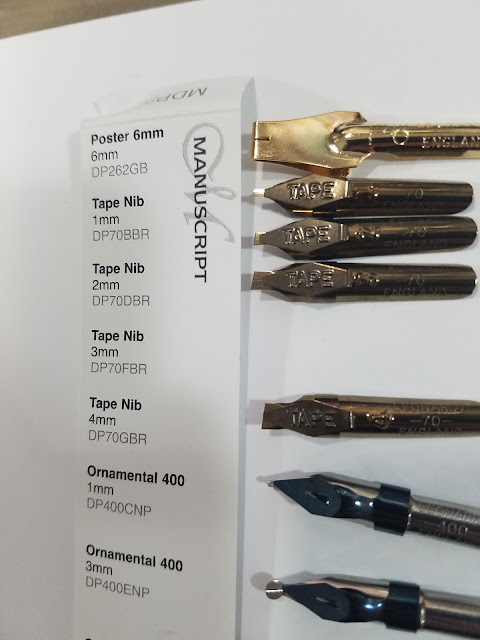 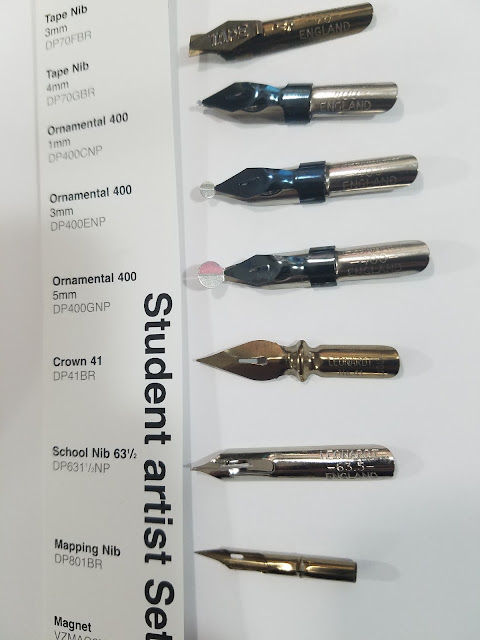 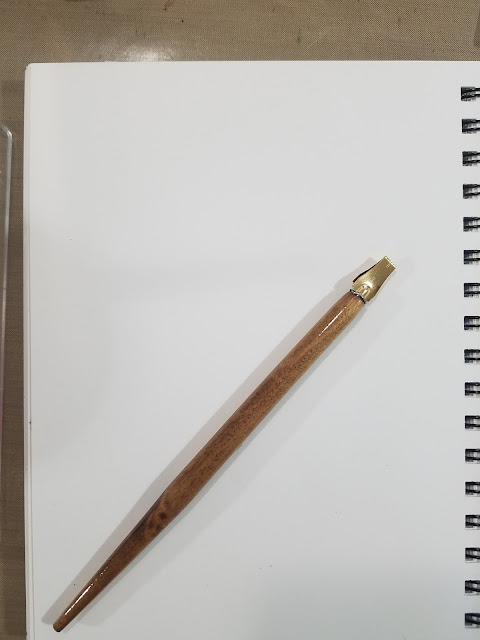 Their included holder is kinda janky and didn't hold the nibs securely after three nibs, so I'm switching over to the Kuretake holder included in my ArtSnacks.

Since these were unused nibs, I went ahead and cleaned each off with an alcohol wipe to remove the protective oil.  I then dipped each nib into a Dinky Dip full of the Kuretake Sumi Ink 60, although with larger nibs, I would dip the nib directly into the bottle, as the Dinky Dip could not hold enough ink. 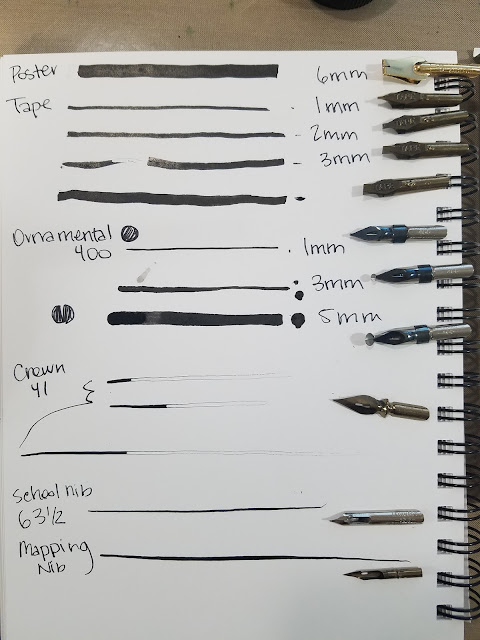 Poster Nib- Bold and large, similar to a Brush nib.  Probably excellent for poster lettering and borders.
Tape- Features a diagonal nib.  Probably also excellent for borders, although a little difficult to control.
Ornamental- Reminds me of the tip on B nibs, although not as well built.  Come in larger sizes, a little difficult to keep width fixed, and not intended as a flexible nib.
Crown- Handles like a cheap spoon nib, no ability to carry ink.
School Nib- Reminded me of inexpensive G nibs.
Mapping nib- Held a surprising amount of ink and offered a surprising amount of flex.  Fun to use.  Had to use the included crowquill handle, which was fairly cheaply made.

The Poster, Tape, and Ornamental nibs are definitely geared towards lettering and borders.  I found the Crown nib to be fairly cheap and incapable of holding enough ink to accomplish anything.  The School nib, while still cheap, was at least able to draw a line.  The Mapping nib was definitely cheaply produced, but could produce a decent line with no skips, and could deliver lineweight variation. 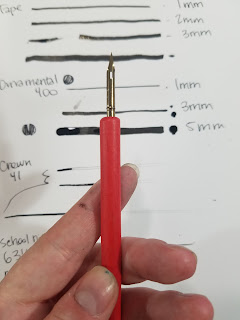 After use, each nib was swished in water and cleaned off again with an alcohol wipe.

Inexpensive sets like these aimed at artists can give you a quick rundown of a variety of nibs, and help you decide which may be worth further exploration.  I personally enjoyed the Poster nib and the Mapping nib, and would be interested in trying more of those.  I feel like the Tape nibs probably lend themselves to ornamental western Calligraphy, although I would be interested in hearing what someone who has experience in that field has to say about their favorite nibs.