Skip to main content
Labels
Posted by Becca Hillburn May 18, 2016

When Jessica contacted me     I requested that Sugartoast focus on how two creators collaborate to make a webcomic when the two creators must work long distance.  What I didn't realize at the time was that half of team SugarToast is the artist Kobacha, who makes fantastic comic-assets and shares them on her DeviantArt.  If you haven't given her DA a spin yet, I highly recommend you check it out!

Hello, readers!  We are Sam and Jess, an artist/ writer team. We collaborate under the name of Sugartoast to create the Breakfast on a Cliff webcomic. Breakfast on a Cliff is a full-color, slice of life comic that follows the story of Cinna Okimura  after he transfers to his new high school. Cinna must figure out how to do well in school and become super popular while still winning the all the ladies’ hearts (and possibly the heart of a new best friend while he’s at it).

Even though we create the comic as a team, we follow the same basic comic process as other individual comic artists for bringing our ideas to life. Each page is planned, scripted, sketched, and inked.

During the planning stage, we talk about various plot points in the story itself. This usually involves events that are far-reaching and possibly a long way off from where we are currently in the story. As we were roommates when we first created Breakfast on a Cliff, we were initially able to discuss the plot in person and decide on events that would move Cinna and the rest of the characters from plot point A to plot point B. We no longer live together, so we plan out the comic in various Microsoft Office documents and discuss them via text or over Skype. Many of these discussions are silly and might have some relevance to whatever media Sam or Jess has been watching. A lot of what we discuss ends up retconned or thrown out.

Any ideas that are not thrown out are worked into the script. Jess is in charge of scripting out all of the events.  Each script usually contains three or four “stories” that make up a comic chapter. Most of these stories are directly or loosely related to each other and chronologically follow Cinna’s various life events as he progresses through school. The scripts are composed mainly of dialogue and character actions with occasional mentions of setting or other points that are relative to scenes.The scripts are written in Word documents and stored in their own folder on DropBox.

As we work in primarily digital format, we also refer to the penciling stage as the sketching stage, Sam, usually sleep deprived, starts sketching based on the scripts. The scripts are generally written out so that they are suitable for 4 panels. Sam will look over the script and throw back any issues at Jess, usually without doing any thumbnailing prior. Any editing to the script is also done during this stage.

Because of the nature of Breakfast on a Cliff’s comic structure, there is a template which we generally work off of for each individual page.  While this makes things a little faster, this does limit some expression on the page -- which we usually compensate for in the art.

Sketches are usually drawn in a color such as light blue or purple in Photoshop, as this helps keep things clean when it comes time to do lineart.  The sketches are usually fairly loose, and don’t incorporate any background elements in great detail.  Sometimes, backgrounds are indicated by simply writing a note as to what is supposed to be happening in the panel. 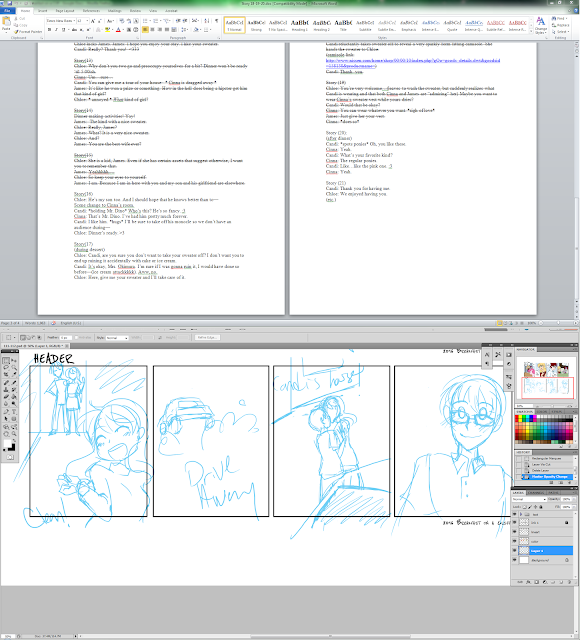 Penciling takes the longest as a panel can be redrawn several times to incorporate dialogue, basic background sketches, and whatever else may be needed.  The dialogue is generally written or typed on the page to account for space needed for it, to help ensure consistent flow with the script.

Each comic page is inked and colored by Sam in Photoshop. She does lineart first in a layer that is separate from the sketches and then, in most cases, colors the entire comic afterward in another layer.  The lineart is generally done using the Pencil tool in Photoshop, and is done in a way to make it easier to fill multiple areas for color. 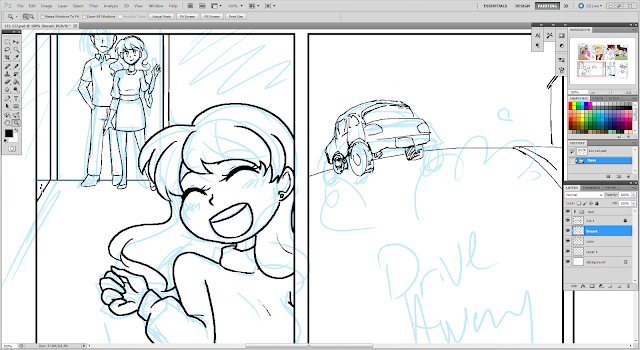 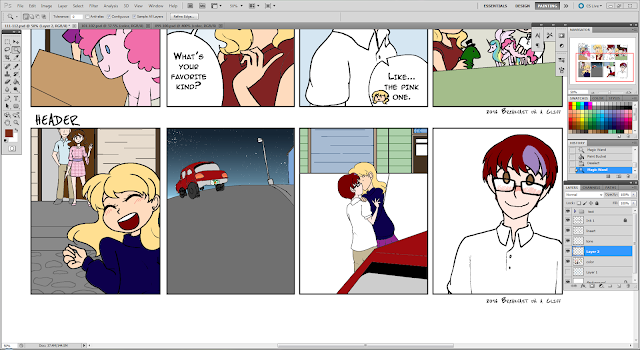 Because we want to keep the art style simple, most of the coloring is done as flats without shading. Occasionally, Sam will host a Livestream as she inks and colors. Finished pages are saved as hi-res PSD files for future printing and as resized png files for posting on the comic site. Comic pages are also stored in their own folder on DropBox. 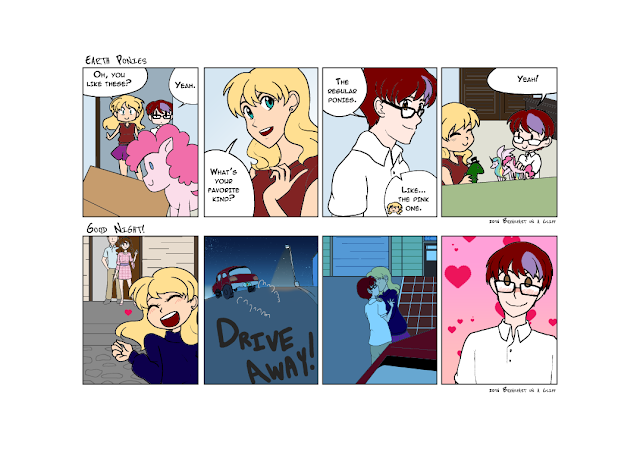 We try to keep all of our work for Breakfast on a Cliff organized on DropBox. We both have access to it and it serves as a handy place to store ideas, references, and materials  for when one of us can’t get in touch with the other.

Since we work as a team, we try to split the work as evenly as possible. Sam is in charge of all of the artwork and other visual aspects of the comic, such as the main site’s layout. Jess is in charge of writing as well as uploading the comic pages and maintaining the various social media pages.