Videogame Playthroughs and Me

Video game playthroughs, sometimes referred to as Let's Plays (after a subforum on the SomethingAwful forums specializing in video game playthroughs) have become a popular internet phenomena in the past five years.  I've been a big fan of playthroughs from the start, as I love videogames, but had to give them up due to increasingly failing eyesight and time constraints.  Playthroughs allow me to continue to enjoy videogames, but don't require the time dedication that actively playing a videogame  demands.

My friends Frankie Coleman and Eric Lide have recently started recording their videogame adventures and posting them online under the Video Game Playing Friends Club.  I've even been fortunate enough to participate when they took their club on the road in the Video Game Playing Friends Club WORLD TOUR.  While I am a little sad that people recognize me as 'that girl who sucks at Mario', playing videogames with friends again brought back fond memories.

So when Frankie approached me about doing the title card for their Sonic 3 compilation, I was quite happy to comply.  Not only did I have the opportunity to help a couple great friends out, but I also had the opportunity for exposure in a demographic I rarely have access too- non artists.  Frankie's requests were pretty straightforward- him and Eric as Sonic and Tails, emulate the original Sonic 3 cover as much as possible.    I took a few liberties here and there (including shoehorning a cameo of myself as creeper Knuckles down in the bushes), and had a lot of fun with this low stress piece. 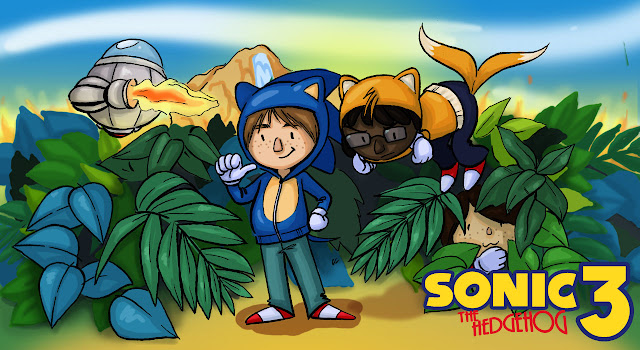 The original inks were just fude pen over blue pencil on sketchbook paper, scanned on my mother's ailing scanner using her aging computer, and then transferred over to my laptop for some Photoshop wizardry.  It's been awhile since I've done digital coloring, and though my major in undergrad was indeed digital media, I far prefer traditional medias to digital.  However, I wanted the style to fit the content, and unless I wanted to learn how to airbrush over a weekend, digital was my only hope.  The font is a Sonic-a-like font sent to me by Frankie, the subtitle isn't exactly right, but it's decently close.  It was a little difficult working in a different aspect ratio than I'm used to, and required some fudging on my part to make it work, but all in all, creating a titlecard for my friends was a lot of fun!

If you haven't yet, I strongly recommend you check out Video Game Playing Friends Club.  Eric and Frankie are extremely knowledgeable about videogames, and their playthroughs aren't speedruns nor perfect runs.  As players, their gameplay is flawed, and I find that endearing.  I enjoy watching playthroughs where players are free to goof up and make mistakes, and their games are fun and full of awfully hilarious voice acting.

As a little taste, here's the video for their entire Sonic 3 playthrough, with my title card right at the front!  If you like what you see, make sure you vote and consider subscribing.