An understanding of facial anatomy and construction can be really useful to a comic book artist, even if you have a cartoony style.  Honestly, I think a well constructed face is even more important for people with styles that tend toward the rubbery, as it gives depth and believability, and allows unusual, model breaking reactions to stand out even more.  There's a bit of a learning curve to understanding the very basic constuction of a human head, but I think it's worth the practice.  I don't claim to have the definitive solution, but what I use works very well for me.  It's a combination of what I've learned in Paul Hudson's Constuctive Anatomy class, a bit of Glen Vilppu, and some Andrew Loomis, and a dash of Burne Hogarth thrown in for good measure. You begin with a sphere (figure 1).  My figure 1 sphere is ugly and lopsided, please make sure yours is awesome and amazing and spherical.  You're going to divide your sphere in half laterally and horizontally, with the lateral divide marking the midpoint of the face.  In figure 2, I've shown a 3/4 view.  Our heads aren't perfect spheres, they're spheres with the sides lopped off and a spade stuck on the front.  The lopped off sides are where your ears are placed, and the spade becomes your face.  In figure 3, I have extended the lines of the chopped off sides straight down, beginning the spade/face.  In figure 4, you can already see a human head in the making.   In this view, you can see the underside of the jaw as it leads back to the underside of the skull (where the neck attaches).  I find that it's useful to draw through every time, because it improves your understanding of the head as a whole, and makes drawing difficult angles easier.  In Figure 5, I've placed tickmarks to show where the facial landmarks will be.  1 is the hairline, 2 the eye/brow line (depending on how you divide your face.  It is the browline in more realistic styles, the eyeline in cartoonier styles.  I use it as the eyeline) 3 is where the nose goes, and 4 is where the lips are usually placed.  In figure 6, I've filled in  the basic features.  It's useful to keep in mind that the eyes are usually spaced one eye width apart, that the nose tends to be as wide as that invisible eyewidth, and that the lips generally don't go further than the corners of the eyes.  Figure 8 shows how this construction translates to my style.

I've been told that this post is less than helpful and needs to be broken down further into steps.  To aid me in that, I'm going to post a few images from Andrew Loomis's Figure Drawing for All It's Worth, and Burne Hogarth's Drawing the Human Head


When you're first learning how to draw the head, you want to focus on the most basic shapes- the sphere, the rectangular face, and the horseshoe that makes up the jaw. 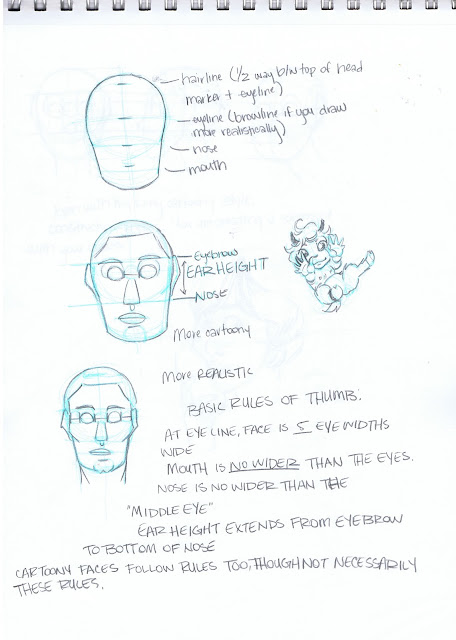 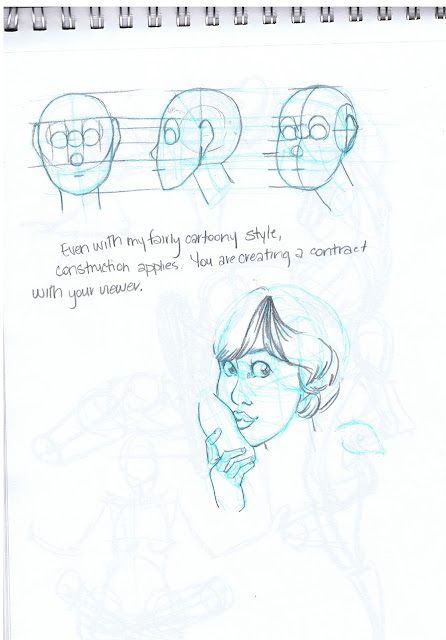 And to tie it all together, here's a video: