So I've taught two semesters of Making Comics with Nashville Community Education, and I thought now was a great time to share my experiences, and compare the two very different semesters.

If you're interested in taking one of my classes in the Nashville area, sign up for workshop and class notifications!

Before we dive in, I want to point out that this isn't my first time teaching- I've taught off and on in various capacities since I graduated from UNO.  From volunteering at my Alma Mater to TA'ing an undergraduate Self Publishing class, to various workshops with conventions and libraries, I have some teaching experience, and felt I was prepared to teach a longer class.

I've also tried pitching various comic classes in the Nashville area for several years now, and hadn't had much lasting success.  As an untested product, it was difficult to get organizations to take a chance.  I'd gotten to a point where if people were interested in having me teach a comics segment, they were only remained interested if the price tag was free, and I'd grown tired of doing volunteer education that did not further my career nor helped me develop my resume.  Joseph suggested I try once again with Nashville Community Education, and something told me it was worth another chance.

My initial pitch to Nashville Community Education was for an eight week class that met up twice a week.  This idea was rejected, but I was given the go ahead for a six week class that met once weekly, giving me six classes to cover the basics.  This was a tall order, and I wasn't sure if I could condense a thorough introduction into comics into just six weeks.

I patterned my class off SCAD's graduate intensives, as I felt that was an immersive, fairly complete deep dive into comics.  Classes started at $60 for all six weeks, and I wanted to make sure my students' got their money's worth.  I also needed to prove to myself that my work and knowledge had value- I'd hit my rock bottom in 2016, and was working my way back up to the surface.

Semester 1:
Fall 2018
This class was only available to people 18 and up 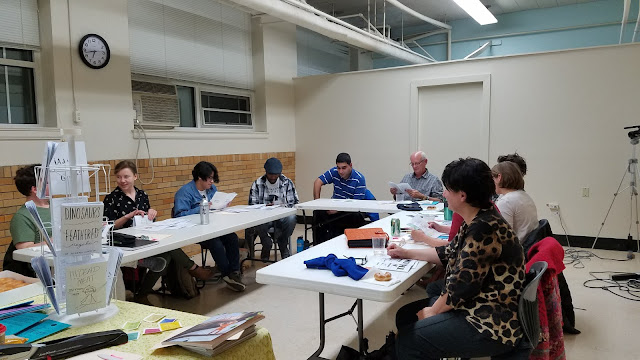 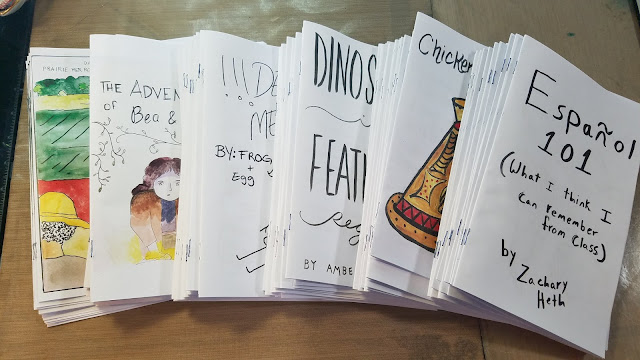 We didn't have much trouble filling the glass, promotion was fairly minimal and almost entirely online.  I did table at the NCE Open House, an outdoor event that coincided with the local farmer's market, on a beautiful Saturday in August, and I feel like presenting my work in that context made it easier to find interested students.  I also promoted the class during Handmade and Bound, a three day outdoor book event open to the public.

My first semester was a struggle.  I started off the semester sick as a dog from Handmade and Bound, this melange lingered for the first three weeks, and this really put a damper on the class.

Although I had videos, presentations, and handouts prepared for the duration of the course, I didn't design exercises to help reinforce concepts, and tended to just plow through the lecture.  The best experiences I had happened after class three (perspective), when my cold finally abated and we'd covered enough of the basics that the students were working on their own projects.  This gave me a chance to actually engage them about their projects one on one, in person, and this was when things really started to click.

For this class, I handled all of the printing- from class handouts to printing their comic work to printing the final zines.  I went through several reams of copy paper, and used several toner cartridges, making this an expensive class to teach.

The Inking Workshop was probably the best class- entirely hands on, lots of fun art supplies to play around with, and I knew that for the next class, I needed to ease back on presentations and focus more on hands-on activities.

Our zine exchange took place on class six- we really had to scramble to get to that point.  Most students submitted zines, but everyone submitted something.  Our exchange was fairly small, and only open to students.

It was a huge relief to finish this semester, and I was determined to learn from my mistakes, and give it another semester before throwing in the towel.

In between my first and second Nashville Making Comics classes, I taught three comics-focused workshops with the St Charles Parish Library System, and this really gave me a chance to revise my presentations and work in exercises 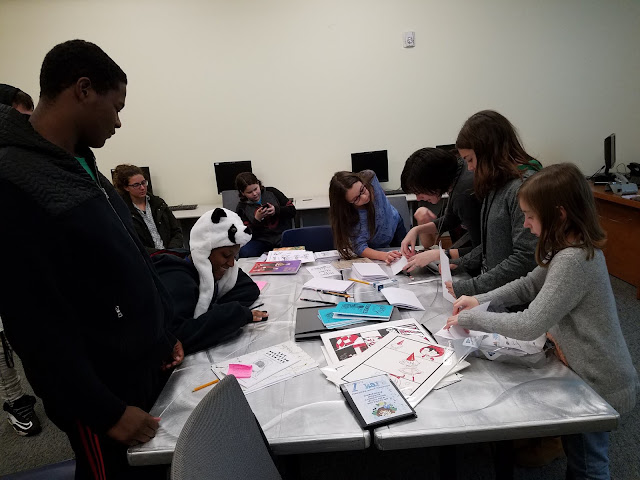 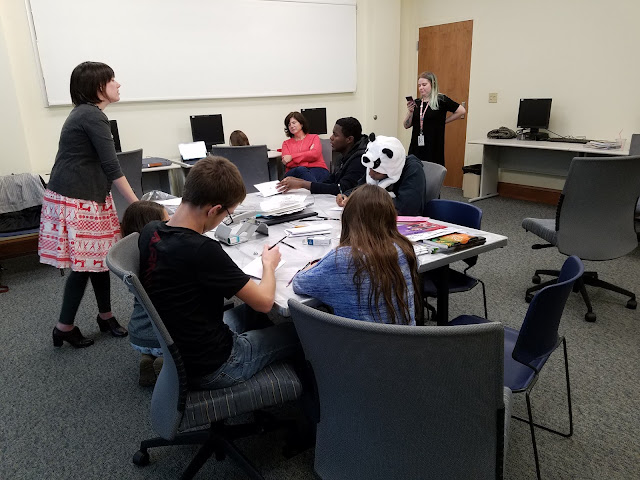 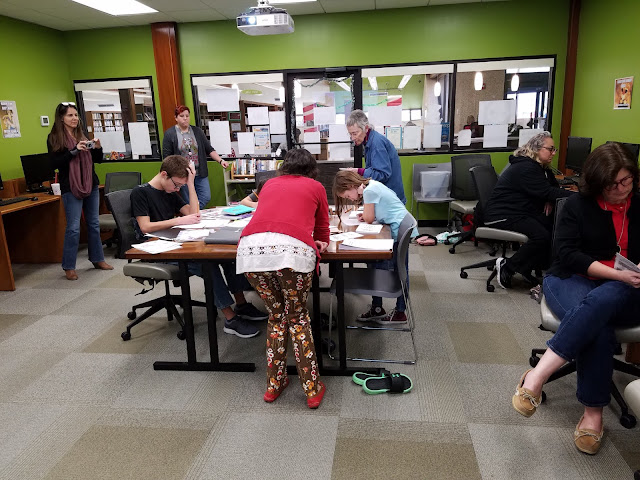 Each class was held at a different branch of the St Charles Parish Library system- Destrehan, Luling, and Paradis, Louisiana.  Each class was supervised by a branch librarian, and all participated in the workshop to varying degrees.  For these workshops, I had my mom's assistance in setting up and engaging the attendees, although for the Inking Workshop, I put my family to work learning the basics of inking.

These classes were open to students of all ages, but the majority of students were young and active, full of ideas and ready to start drawing.  The classes had to be revised to better suit their needs and patience, and while revising these classes, I learned a lot about how to make my classes more interactive.

DIY Zines was the first class I taught with this group, and I was surprised by how young the attendees were.  I ended up scrapping half my presentation, and just focused on assembling booklets for the kids to draw in.  Many of the attendees ended up finishing their short comics during the class session, which is really impressive!  Kids' willingness to A: Draw in class, B: show off their art, even if they feel they can't draw is very inspiring for me, and I feel having a few eager students in a class can really buoy the whole classroom.

Writing Comics was held the day after DIY Zines, and I spent a couple hours that evening revising the presentation to be much more kid friendly.  Kids love talking about their projects, so I tried to work interaction into the presentation every couple slides.  This went so well that I added that element to my NCE Making Comics presentations.  During this class, we talked about planning a comic in a very basic way, then the kids launched into working on their own projects.  St Charles Parish really needs a Comic Artists Club- all these kids need is a little encouragement and some paper, and they're ready to make comics!

Inking Comics was held a week after the Writing Comics class, right after Christmas, and was much more structured than the other two classes.  Students practiced drawing and inking their own art, or could practice techniques on some of the blueline exercises I had prepared in advance.  Everyone in the class took to inking like ducks to water, and I was really impressed by the skill shown by our first time nib users! 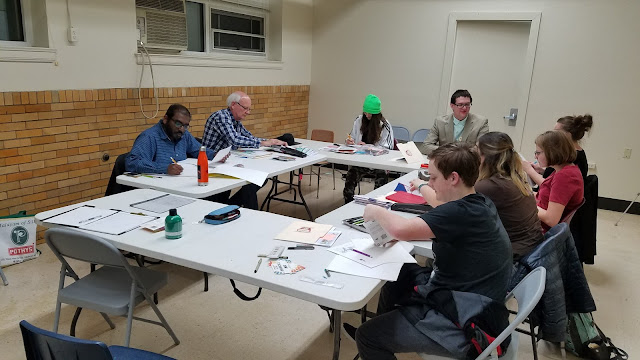 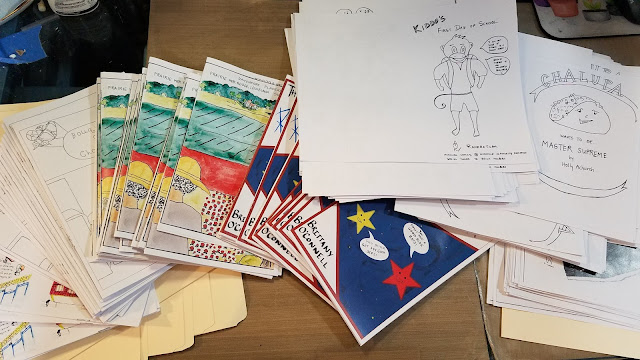 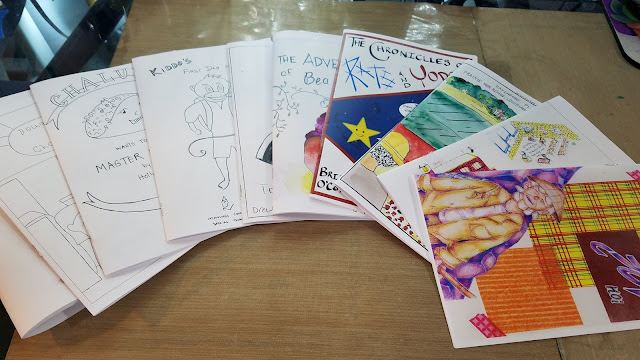 This class was open to students age 13-16 with a parent in attendance, 16 and up with parental permission.  I'm really excited about this shift, because during the Open House, many parents were interested in comics classes for their kids.

Class was more difficult to fill, we really had to do a lot to promote it.  I think this difficulty was due to the fact that I had no physical events scheduled where I could promote the class directly.

Sponsorship with Wake Up Comics allowed us to buy additional supplies such as bone folders and a long arm stapler for class use.  It also allowed us to use their space in The Groove, a local record shop, for our Zine Exchange.  With this as an incentive, I worked really hard to promote the class, and tried a variety of methods to get the word out.

The Second semester was much better-I started this semester off with a bang- high energy, lots of passion, and snacks for students to munch on during class!  While many might find my enthusiasm a bit overwhelming in day to day situations, it's quite useful for teaching, as this enthusiasm often gets students fired up.

This semester, I recognized the importance of utilizing class time for drawing exercises, and worked many drawing and writing exercises into the first three classes of our semester.  From character design to figure drawing to environmental sketching, I tried to keep the exercises short and engaging.

Since our Zine Exchange was going to be held at an outside location after the semester ended, I used the extra class time to expand some of our classes, and give students more time to work during class.  This extra class gave many students an opportunity to have students fold and staple their own zines as well, which is a really nice way for students to add finishing touches to their work.

Since many students needed additional time, I negotiated with NCE to use the classroom for two bonus classes- the Tuesday and Thursday after class official ended.  I feel like this extra time helped us reach the finish line as a class.

NCE handled the class materials printing- so handouts and exercises were printed and collated by NCE, while I handled comic printing and printing everyone's zines.  Having NCE handle the day to day print needs saved me a lot of money, and allowed me to reclaim a lot of time. 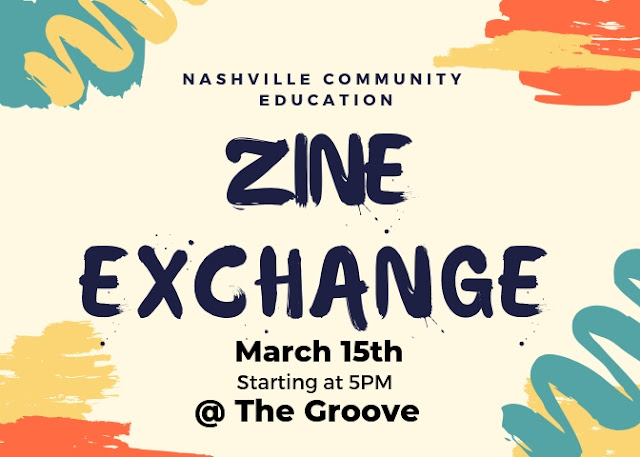 Promotion was fairly minimal- small printed fliers were given to my students, distributed at the local Jerry's Artarama, and on the check out counter at The Groove.  I shared announcements on Facebook and Instagram, as did Wake Up Comics and NCE.  Students were encouraged to come, and invited to bring friends and family.  Although students from the Making Comics and Zines 2018 class were invited to come and exchange comics, none showed up. 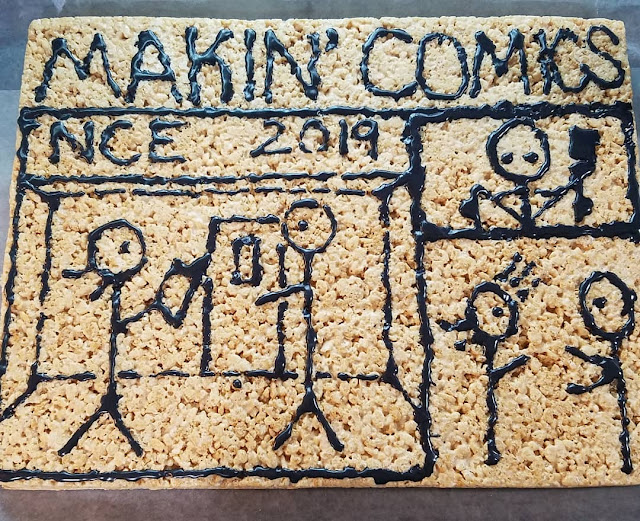 I volunteered to bring setup materials and drinks, I also ended up using a 2 pound rice krispy sheet to make a silly stick figure comic to celebrate the event. 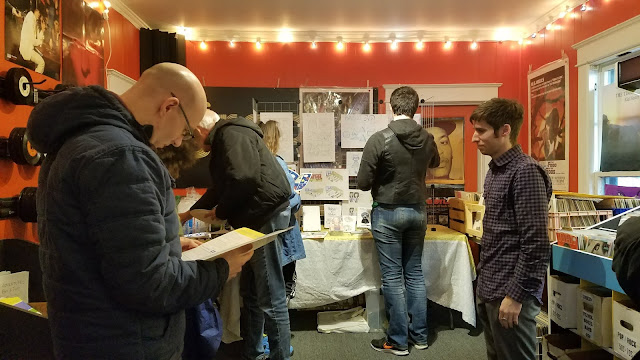 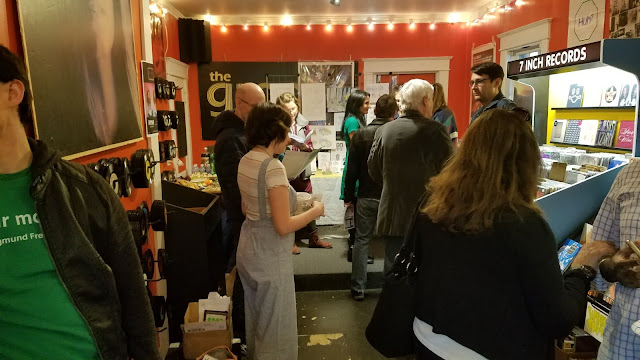 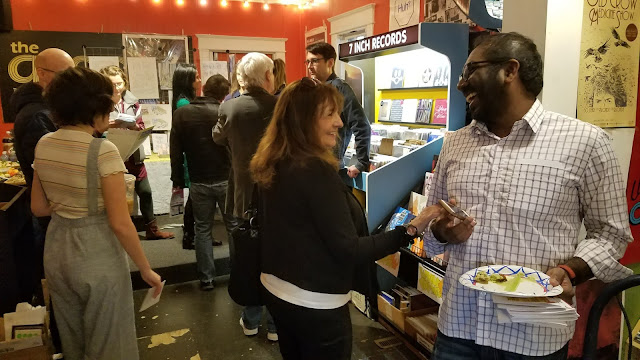 To prepare for the zine exchange, I printed 17 copies of every student's comic, as well as 17 fresh copies of Cicada Summer.  I also laid out Lilliputian Living Volume 2, so I would have something fresh and new for the exchange as well!

I brought a 6' table, my mesh gridwalls, a spinner rack, and book easels to display student comics.  Students were asked to bring their original pages, which I displayed on the gridwall.

The exchange took place from 5PM-7PM at The Groove, and we had a really good turnout!  Most students stayed for the entire duration of the event- I figured most would show up, grab their peers' zines, and leave- but people chatted, talked about one another's comics, and enjoyed the food.

Plans for Next Semester 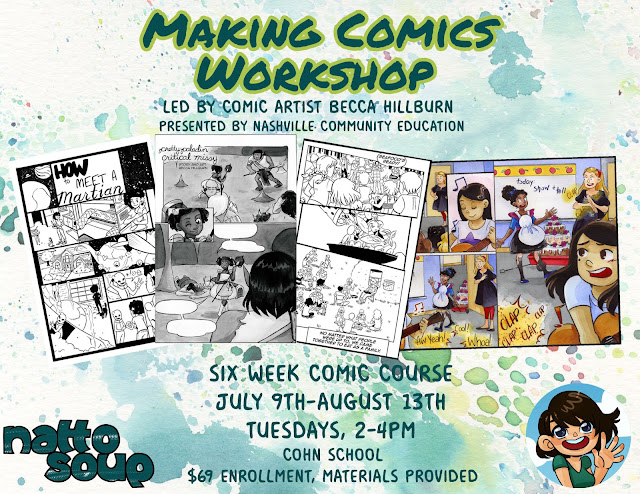 My next Making Comics course with NCE is scheduled for this summer!  We've adjusted the time slot to accommodate younger comic artists who may be off during the summer, and I hope to have another group of amazing comic artists!   If you're interested in learning more about my comic classes here in Nashville, you can sign up for information here!

Talking about offering a regular Making Comics (6PM-8PM) this fall, as well as adding an Advanced Making Comics course for returning students, or students familiar with making comics.  I'm really excited about the future of this class!

Not in the Nashville area?  My Artnerds on Patreon get access to all the resources created for my Making Comics classes, as well as any other workshop I teach!  You can join the community, and gain access to these classes for just $2 a month!