Guest Post: Joichi and Creating the Story through Characters

Before I start; I will take a moment to introduce myself. My online name is 'Joichi' and I'm author and artist of Lavender Tea comic; a slice of life story about Jasper; sensitive teen boy learning about love, friendship and how to deal with his conflicting self identity.

With that done, let's begin the lessons! How do you create character-driven stories? Well, most people like to design characters and we sometimes think of their back stories. But the main issue is; how do you place them into a story plot?


Q: Who's character’s POV (point of view), where is it from? 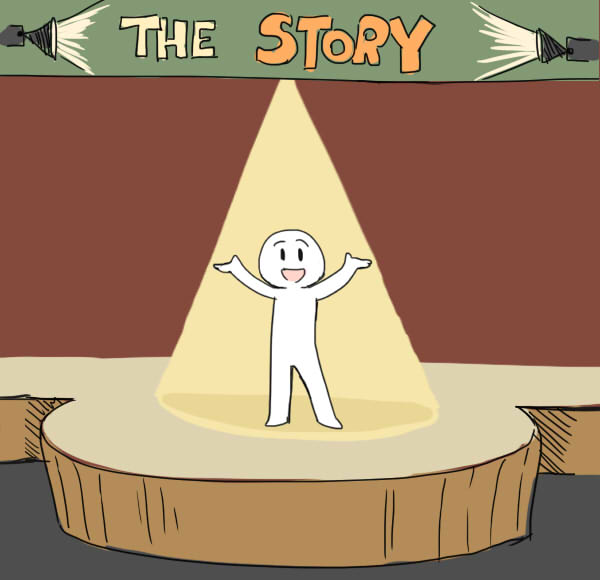 If this is your first story; the easiest is to focus on one core character. What are their conflicts, strengths and development? Are they simple or complex characters?  Is your main lead (protagonist) active lead or a passive lead?


Active: Does he or she drive the events forward?  Are they making self-conscious decisions


Passive: Are they letting other characters step in to make the choices? Have they always been like this, will they change through the story?


Important tip: Give your character a goal to strive for; these help push your lead to have a purpose. Include obstacles, conflicts along their way - what is preventing them from achieving it? If you are adventurous, throw a plot twist as well.


There is no wrong or right way as either method works to develop your character’s growth whether they develop a bad habit or make independent choices. In turn, the side characters should contrast with your main lead.


Q: What if you had more characters that needs to tell their story? 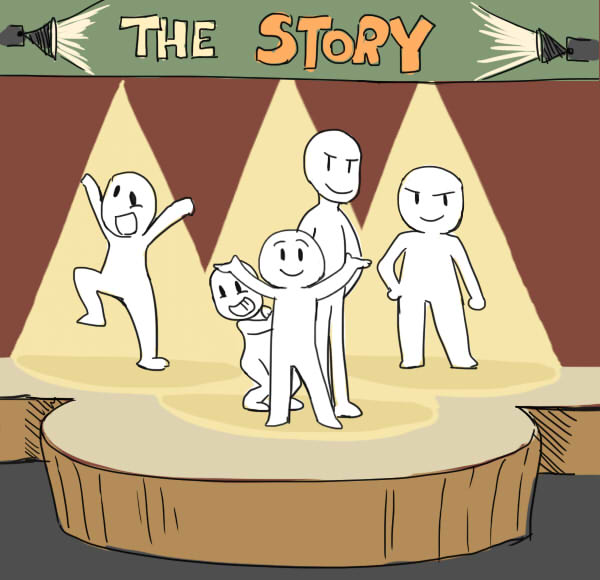 [This gets tricky] You'll still have your core main character but now the story has to divide its attention to the other sub 'lead characters'. A method which I've seen worked, 1) Characters that build your story's world 2) Other chars: the ones whose interactions intertwine with others. But this is up to personal storytelling, they don't have to work exactly in that order.


Try not to introduce too many characters in one chapter. Space their scenes out in various chapters, scenes.etc. There are other ways to bring in new characters.


Bad ex: 'Mr A, Miss B and Miss C all transferred to the same school. They arrived to see the main lead in action.' [Unless this story is a satire comedy, this may seem to ‘stick’ the cast as a whole rather than separate people.]


Good ex: Mr 'A' works at a shop next to the school, which the lead visits. As Miss 'B' transferred to their class, hearing this, Miss 'C' decides to ditch class.
[This starts to separate each character as individuals, B and C has a chain reaction.]


Note: As the author, if you feel that there isn't enough space to talk of your epic sub-lead characters; give a spin off story or a standalone chapter with their POV.


Important tip: Character interaction and convey the story through visuals, rather than ‘spelling it out’ to the readers. This is covered by Mark Crilley’s Writing/Storytelling video. I recommend it, as he explains it really well.


Create a 'Plot Tree' for your story 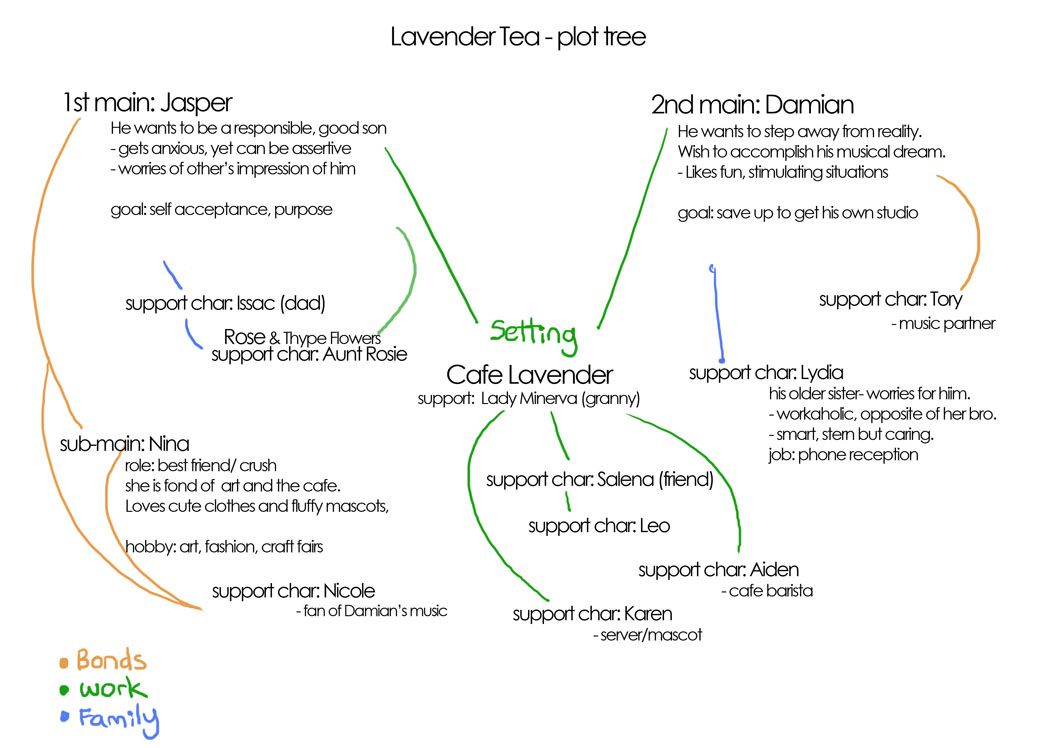 When I got the characters personalities finalized, I create a 'plot tree' diagram, where I separate the characters into groups. This can help organize your character's roles from the important ones to the support roles:
In literature, there are character driven arcs which are defined as:
‘The transformation or inner journey of a character over the course of a story,’ They begin and gradually transform into a new person, for better or for worse. 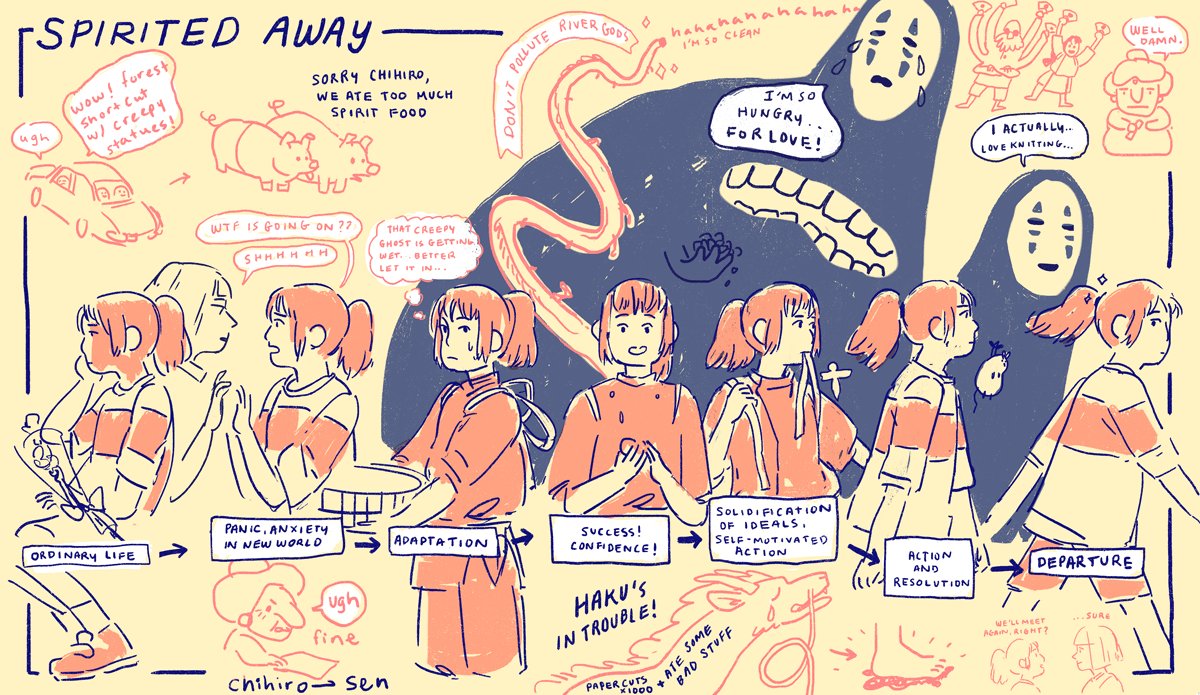 Art by Jean Wei
Chihiro from Spirited Away; she transforms from a sad, selfish child into a wiser and responsible young girl by the end of the film.


This is good to keep in mind if you want a story aim at teens or young adults. Write a couple conflicts that appeal to the human heart and mind. Everyone changes even within a year or 3 years. But your character will take a slice of flaws with them.


Study about characters whenever you watch an animated film, an anime show or a movie. These experiences come from creative writing and making observation from real life. As viewers, you are able to take the knowledge and apply them to your stories. Good luck with story writing. Keep creating stories because your next story might be even better than your first story.