I end up creating a lot of illustrations when testing and reviewing art supplies.  Some of these were used for YouTube reviews or tutorials, and some are part of larger posts that will be shared here.  All of them take a significant amount of time to draw, ink, and render, and I thought they were worth showcasing on their own merit, as they often get lost in larger posts.

These are in no particular order, and some illustrations may end up rescanned and cleaned up for use elsewhere, as it was difficult to get the initial scan.

While breaking in my Strathmore Visual Watercolor Journal, I decided to do some fun Line Tool inspired emotion stickers.  They're really cute in real life, but didn't scan very well, due to the watercolor sketchbook warping with use.

You can get your own Strathmore Visual Watercolor Journal in a variety of sizes.  I used the 8.5"x5" journal for these watercolor doodles. 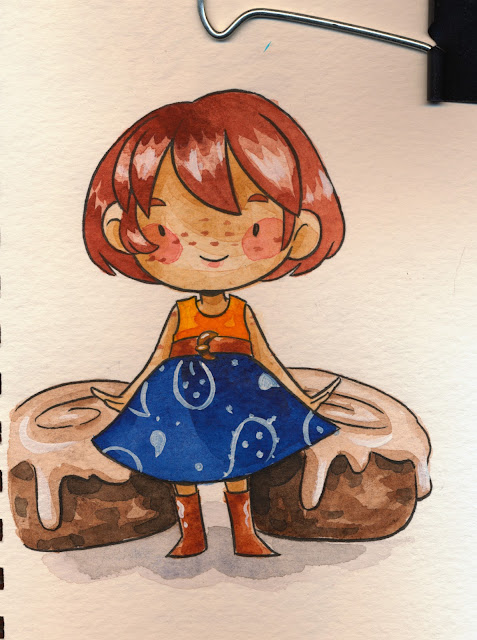 Based on the above illustration of Kara with cinnamon buns, I thought it would be cute to do some Line Tool style 'stickers' of various emotions. 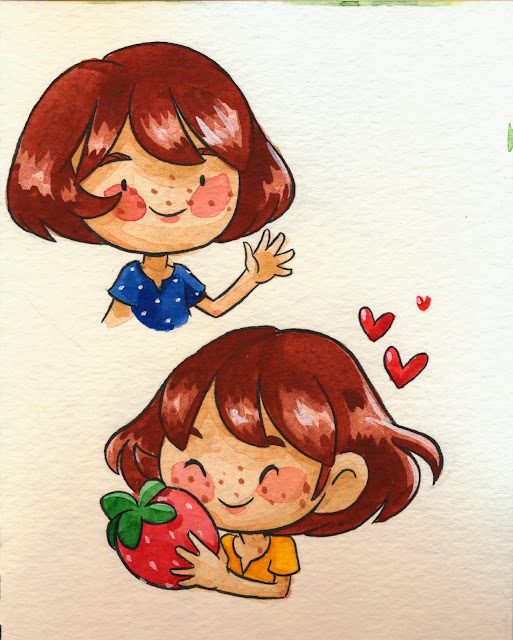 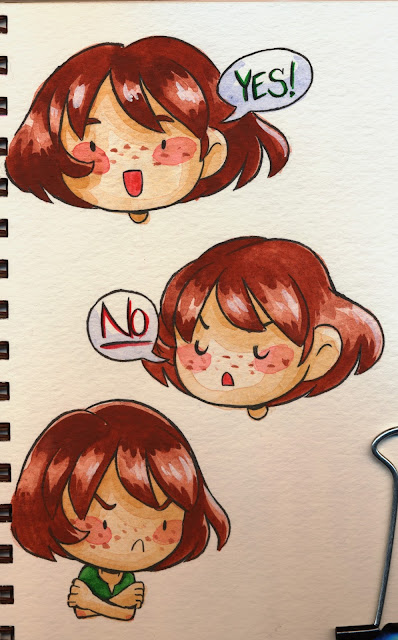 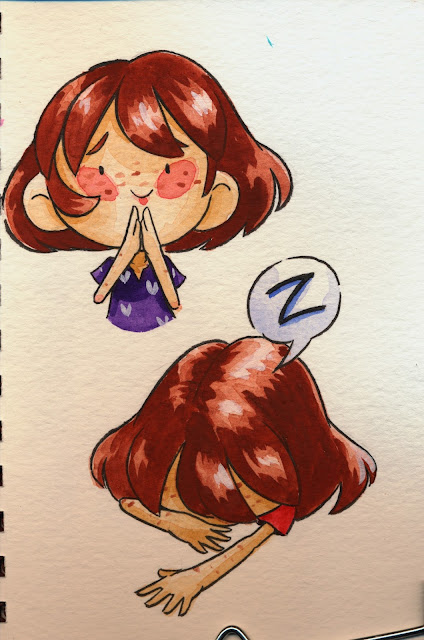 After a long day, I decided to treat myself with a fun handlettering exercise- a letter b in daisies.  I inked this with Winsor and Newton non waterproof inks, and the process video is up on Youtube, if you'd like to check it out!


The above illustration is super tiny- 4"x4" tops.  It was inked with a Sailor Mitsuo Aida brush pen (waterproof!) and painted with Winsor and Newton half pan watercolors.  I used a set I've assembled myself over the years, but you can get started today with this set.  This was the same set I started with years ago.

Above is a watercolor test for Fluid's new cotton rag watercolor paper, Fluid 100.  That review is coming up soon, but I was really pleased with how this turned out!

I recorded a time lapse video of the above Copic illustration (which scanned really dark), which should be up on my Youtube channel in a few weeks!  New stuff goes up once a week, and it's often a sneak peek into what I'll be reviewing on the blog!  This marker piece was completed on Strathmore's 400 series Mixed Media paper.

This piece was a field test for the Kuretake Gambi Tansai watercolor set Heidi Black sent me as a Christmas present.  I inked it with a Sailor Mitsuo Aida brushpen, and used my normal sable and squirrel brushes to paint on Arches Rough watercolor paper.

This little illustration of Kara in lavender was completed as part of my review for Zig Brushables waterbased markers.  I loved how they handled on the Winsor and Newton Pigment paper, but didn't love that they reactivated my ink.  I've since found that pretty much ANYTHING will reactivate Sailor Mitsuo Aida ink on Pigment Marker Paper, so I'm giving the Brushables a shot on a couple different types of coated marker paper.
This is a Copic and Prismacolor marker test on the Pigment Marker Paper.  Alcohol markers will reactivate Sailor Mitsuo Aida ink on this paper too, so be careful!  The full review for both Pigment Markers, and Pigment Marker papers will be coming up soon, so keep an eye out!

Strathmore's linen paper for acrylics turned out to handle the pigment markers best for how I like to render- no smeared ink, fairly easy to layer, drying times didn't matter as much.

I've strongly hinted my feelings regarding craft supplies that over promise and under deliver in the past.  I'm putting Ranger's Distress Watercolor Cardstock under some strenuous testing to see if it makes the cut, and here are a couple field tests.  The top is a not yet color corrected portrait of my cat Bowie, below are some tasty chocolates I'd received as a Christmas present.
The above illustration has an accompanying step by step process video in the works (editing takes forever!) so keep an eye out on my Youtube Channel for it.  I discuss Copic Wides, making your own Copic Misters, and general marker techniques!
This illustration was created to test out Strathmore's 400 series Mixed Media paper- how it handles ink, alcohol markers, alcohol, water, and ink sprays.  There should be an upcoming time lapse video of the process, and I'm working on the overall review (so many!)


I'd purchased several Strathmore Visual Journals for review purposes (watercolor, Bristol Vellum, Mixed Media) and here's an alcohol marker test on the Bristol Vellum.  I believe there should be an accompanying video at some point too.
And lastly (for now), the assembled Pigment Marker and Ink illustration.  The two layers were completed separately, as ink tends to smear on Pigment Marker paper, and I wanted to get a true bead on how this paper handles.

I think that just about completes the majority of what I've been working on behind the scenes at Nattosoiup Studio.  I hope you found it a little bit inspiring, and I hope you're looking forward to these upcoming videos and reviews.  If you're interested in what I'm working on between posts, you should definitely check out my Instagram and Twitter, I post new art daily!